Greenwich Historical Society will unveil a dynamic exhibition that showcases the role Greenwich women played on the national stage in achieving the passage and ratification of the 19th Amendment.

Opening February 5, and on view through September 6, An Unfinished Revolution: The Woman’s Suffrage Centennial features a wide variety of historic objects from museums, libraries, private collections and descendants of suffragists to illustrate the long struggle for the right to vote.

Through educational and interpretive programming, the Historical Society will explore broader social and civic issues that resonate today, such as voter registration, voter suppression and the Equal Rights Amendment.

“While we take the right to vote for granted today, the debate over granting women suffrage was a minefield that shook our community and the nation to the core,” said Maggie Dimock,
Greenwich Historical Society Curator of Museum Collections, adding,“This exhibition will serve as a platform for educating the community on this historic Amendment that empowered women in their fight for political and economic equality, while furthering the Historical Society’s commitment to informing broad audiences on complex social issues that have affected Greenwich.” 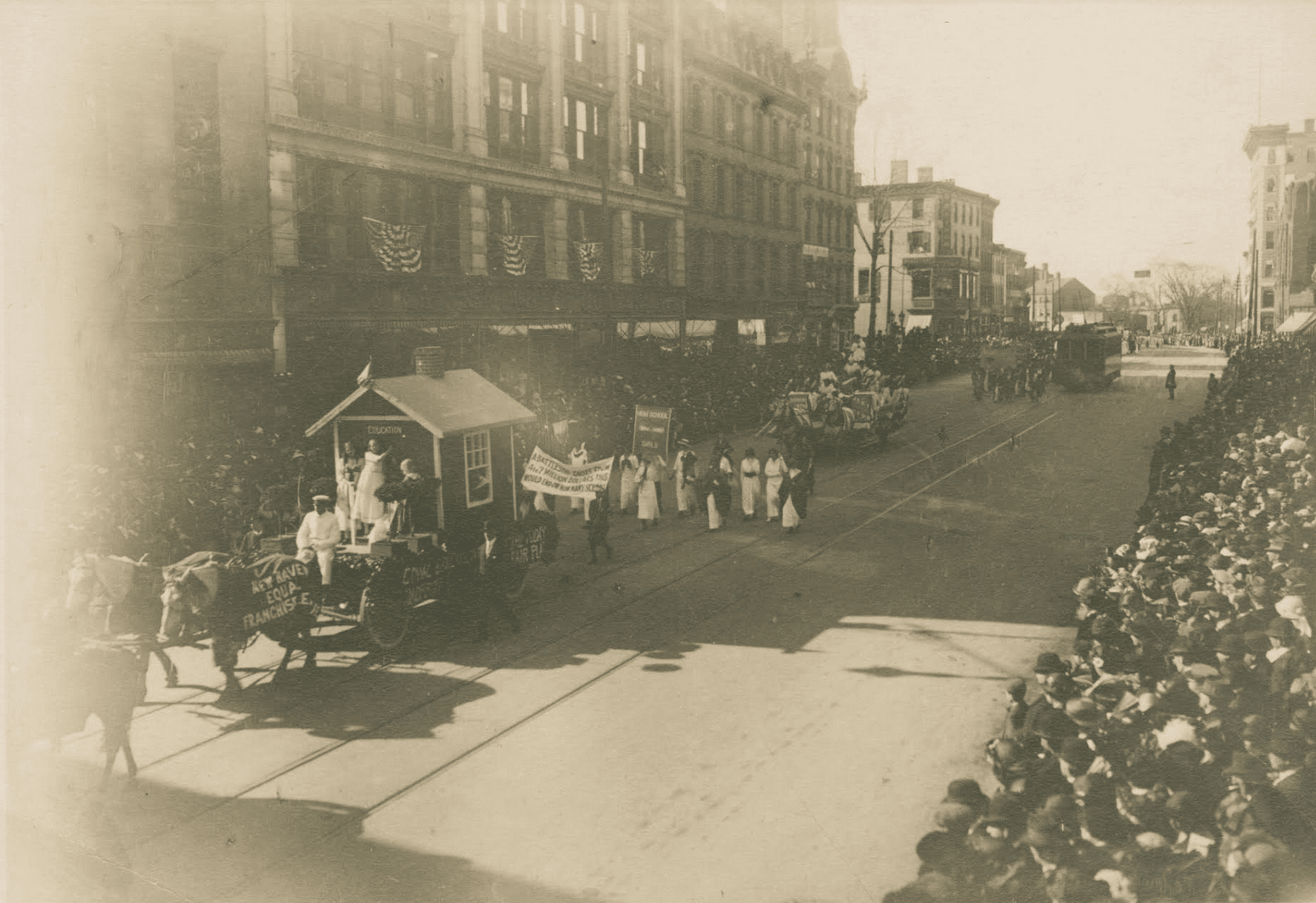 An Unfinished Revolution is curated by Kathleen Craughwell-Varda, a 30-year veteran in the museum field who has extensive knowledge of Connecticut history and the contributions of women in the state from settlement through the 21st century.

According to Craughwell-Varda the descendants of many prominent suffragists were instrumental in creating an authentic voice for the exhibition.

“The suffragists were frequently criticized for stepping outside of a woman’s sphere, even by their own families, but today their descendants take great pride in their accomplishments in the face of so much opposition,” Craughwell-Varda  said.

Visionary Greenwich Women Championed the Cause

The early history of the suffrage movement is dominated by Susan B. Anthony and Elizabeth Cady Stanton.

However, several leaders who campaigned for the passage of the 19th Amendment lived in Greenwich, either full-time or for part of the year. They were often wives of New York and Connecticut’s wealthy elite who had the time and financial means to dedicate to the fight, with or without the support of their spouses and families. Their contributions, and those of other women in the region who broke away from social convention to stand up for a cause they believed in, will be highlighted. They include:

• Louisine Havemeyer, a noted New York art collector who maintained an estate in Greenwich. Havemeyer joined the movement on the encouragement of friend and famed impressionist Mary Cassatt. She was the oldest of the suffragists who protested at the White House to be arrested. 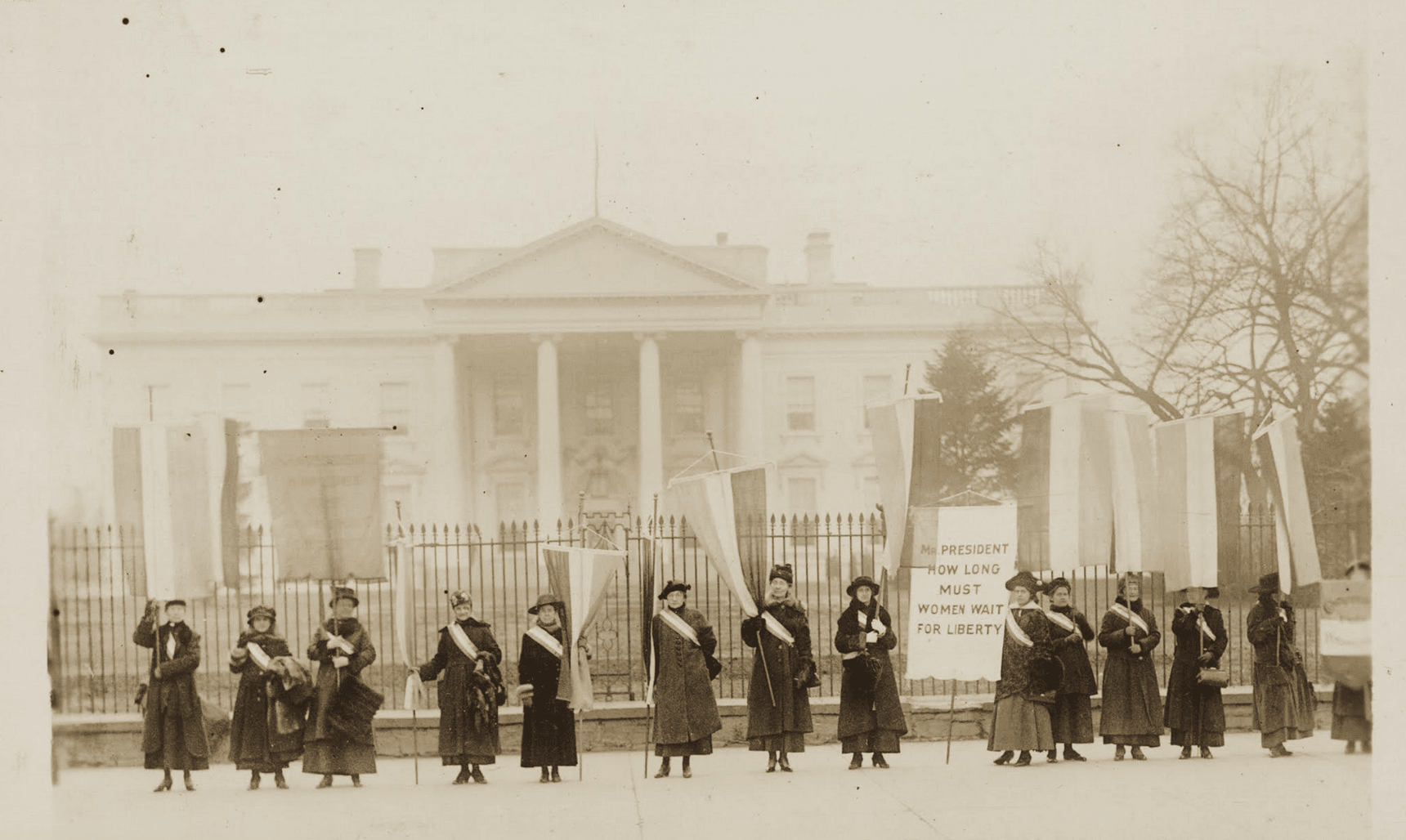 Suffragists Protesting in Front of the White House, 1917-1919, Library of Congress

• Valeria Hopkins Parker, a Greenwich physician and advocate for awareness of women’s health issues. The Greenwich Equal Franchise League was founded in her home and she was a founding member of the Connecticut Woman Suffrage Association.

• Caroline Ruutz-Rees, the founding headmistress of Rosemary Hall in Greenwich. Ruutz-Rees was active in several state-wide and national suffrage organizations, and was responsible for founding the Junior Suffrage Corps, which counted several Greenwich children among its members, including the twin daughters of Elmer and Constant MacRae of Cos Cob.

• Grace Gallatin Seton, an accomplished artist and writer who was active in national, state and local suffrage organizations, serving as Vice President of the Connecticut Woman Suffrage Association. Seton was ultimately denied the right to vote because her husband, Ernest Thompson Seton, was Scottish.

In addition to exploring the stories of Greenwich’s preeminent suffragists, An Unfinished Revolution will also address the equally important impact of the women and men who opposed suffrage.

The exhibition also highlights the participation of working women, women of color, and middle-class families in the fight for equal suffrage, with a special focus on the suffragist activities of Elmer and Constant MacRae, proprietors of the Holley Boarding House in Cos Cob (now the Bush-Holley House Museum).

Featuring striking protest banners and historic clothing, sashes, and heirlooms worn by prominent suffragists, visitors to the exhibition will be immersed in the thrilling atmosphere of activism that defined the Progressive Era.

Original correspondence, vintage photographs, and works of art from the Greenwich Historical Society’s collections open a further window into this tumultuous period.

Gallery interactives testing visitors’ knowledge of American voting rights today provide an opportunity for visitors of all ages to reflect on the changes that have taken place in our society over the last 100 years – and the important work still ahead to ensure equal rights for all.

“This is the second exhibition we’ve hosted since the newly reimagined campus opened in 2018,” said Greenwich Historical Society Executive Director and CEO Debra Mecky. “Attendance has doubled since then and we expect this exhibition to add even greater momentum, appealing broadly to young adults and families – key aspects of our mission to strengthen the community’s connection to our past, to each other and to our future.”

A preview reception for members of the Historical Society will be held on February 4th.

The Greenwich Historical Society Museum galleries, located at 47 Strickland Ave in Cos Cob, are open Wednesday through Sunday, 12:00 noon to 4:00pm.

Admission is $10 for adults; $8 for seniors and students and free for children under age 18. Free admission to the public is available on the first Wednesday of each month. Reservations are required for groups of 10 or more, group reservation rate is $7 per person.

Visits to the museum will be complimented by the Historical Society Store and Café, which are open Monday – Friday, 9am – 5pm and Saturday and Sunday, 12 – 4pm.