On June 24, Swim Across America Greenwich-Stamford Swim, usually held in the open water in Long Island Sound, was relocated to the Boys & Girls Club of Greenwich due to inclement weather. More than 300 swimmers participated.

However, being inside and swimming in a pool didn’t dampen the spirits of the swimmers and volunteers who joined together and raised more than $385,000 for the Swim’s beneficiary, the Alliance for Cancer Gene Therapy (ACGT).

In the past 11 years, the Greenwich-Stamford Swim Across America event has raised more than $3.4 million to support several ACGT-funded scientists working on better ways to treat cancer.

ACGT, headquartered in Stamford, is the nation’s only non-profit dedicated to funding cancer cell, gene and immunotherapy research, and is unique in that 100 percent of donations go directly into cancer research grants.

Team Julian was one of the largest teams with 80+ swimmers swimming in memory of Julian Fraser, a 2014 Greenwich High School graduate, swim and water polo team captain, who sadly lost his 11 month battle with osteosarcoma earlier this year. Team Julian raised $84,387 and was led by team captain Brooke Lorenz of Riverside, Connecticut, who personally fundraised $12,925. Brooke is also a Greenwich High School graduate and Lymphoma cancer survivor. Brooke celebrated six years of being cancer-free at this year’s Swim.

Peter’s Defeaters, led by Peter Carlson of Riverside, raised $61,762. Peter’s Defeaters swam in memory of several friends who have lost their battle with cancer and in honor of those fighting courageous battles. Peter himself raised a third of the team’s total amount by personally raising $20,958.

Team Turn the Tide was led by 13 year-old Robert Jacobson of Greenwich, who tasked not only his team to raise funds to fight cancer, but all of his recent bar mitzvah guests as well. Turn the Tide raised $26,149 and Robert personally raised $18,353.

Diana Tramontano of Greenwich headed up the Greenwich Academy and Brunswick School team called GA/Wick. GA/Wick raised $18,920, of which $8,450 was fundraised by Diana.

Team College raised $12,748 and was headed by team captain Chip Linehan of Philadelphia, Pennsylvania. Team College has participated in the Greenwich-Stamford Swim for many years and has always been one of the top fundraising teams.

Top individual fundraiser for the Swim Across America Greenwich-Stamford Swim was Andy Alisberg, who raised an amazing $23,795.

Andy and his son Will swam in honor of Vietor Evans, a classmate of his daughter Katie, his grad school suite-mate Paul Stuka, friend Robin Zorthian and others. They also swam in memory of too many friends they have lost in recent years.

Other highlights of the Swim included honorary speaker Alec Fraser, father of Julian Fraser, who spoke about the importance of raising funds for cancer research. Alec stated that even though his son Julian’s disease had already progressed too far for certain treatments, they are now hopeful that there may soon be better treatments available.

Alec also noted how fitting it was that the Swim this year was moved to the Boys & Girls Club of Greenwich, as that is where Julian learned to swim and swam as a child. He said he truly felt like Julian was with them. And many of the Team Julian teammates echoed that sentiment with temporary tattoos that read “Julian is Here.”

In this one-year alone, 1,688,780 new cases of cancer will be diagnosed and there will be 600,920 cancer deaths in the U.S. This staggering statistic offers compelling proof of the need to continue devising new approaches to research and treatment.

Nationally, Swim Across America has raised more than $65 million in the fight against cancer with 16 open water swims and numerous pool swims throughout the United States since its founding in 1987 by Connecticut residents Matt Vossler of Darien, and his lifelong friend and college roommate Jeff Keith.

To donate to this year’s Greenwich-Stamford Swim Across America event or to learn more, visit swimacrossamerica.org/greenwich. 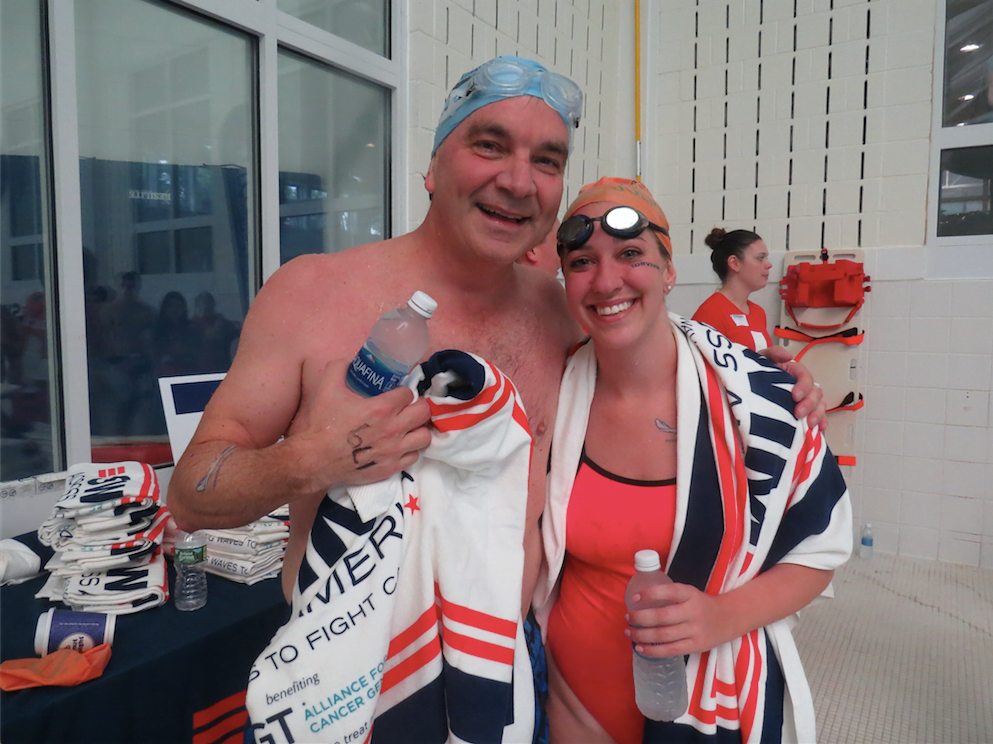 Swim Across America, Inc. (SAA) is dedicated to raising money and awareness for cancer research, prevention and treatment through swimming-related events.  With the help of hundreds of volunteers nationwide and past and current Olympians, Swim Across America is helping find a cure for cancer through athleticism, community outreach and direct service.  To learn more visit swimacrossamerica.org/greenwich or follow on Facebook, Twitter or Instagram.