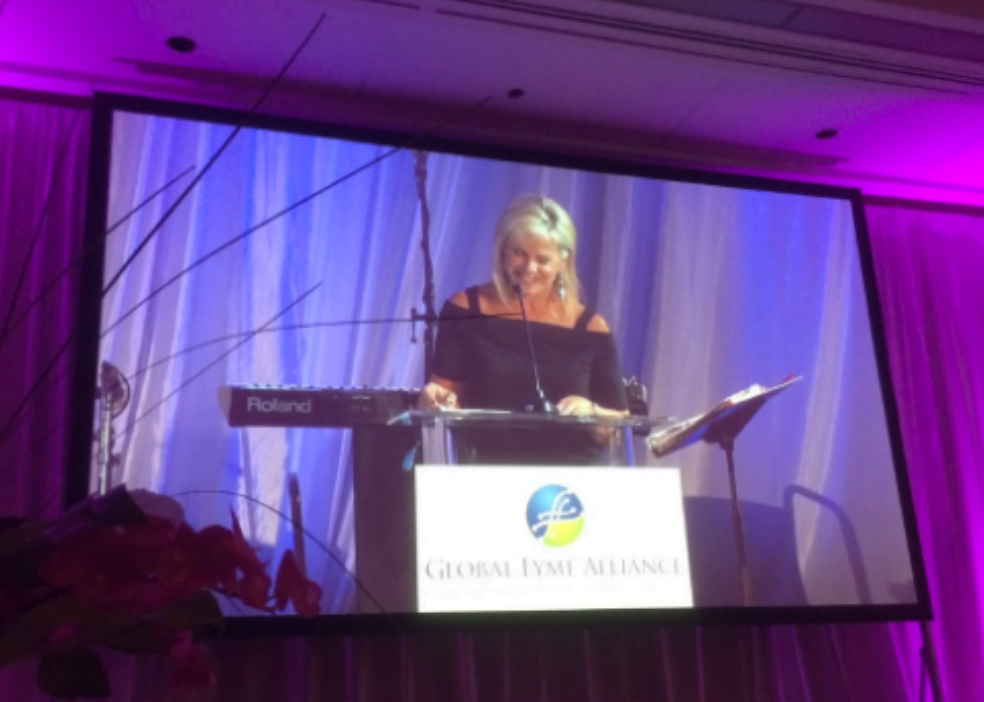 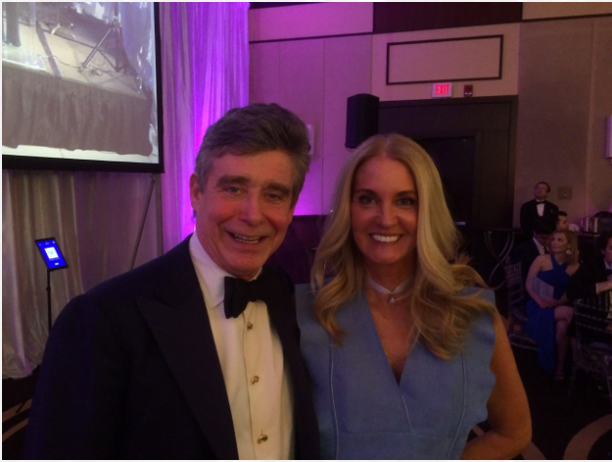 Novelist Jay McInerny, one of the honorary event chairs for the gala, approached Vessels after she spoke to thank her.

Vessel, one of the event chairs at the Global Lyme Alliance’s “Greenwich Gala” on Saturday night, reminded them all why they were there. She spoke about how her son getting Lyme disease at age 12 changed his life and the lives of his parents.

“If I was a high school student suffering from Lyme disease and was writing a college essay for admissions, the title would be ‘Sidelined,’” the Darien mother said. “This is what happened to our very healthy, happy, energetic, 12-year-old son, Chase, almost seven years ago.”

Vessels went on to describe the family’s ongoing search for treatment and the difficulties Lyme disease put in her son’s path. 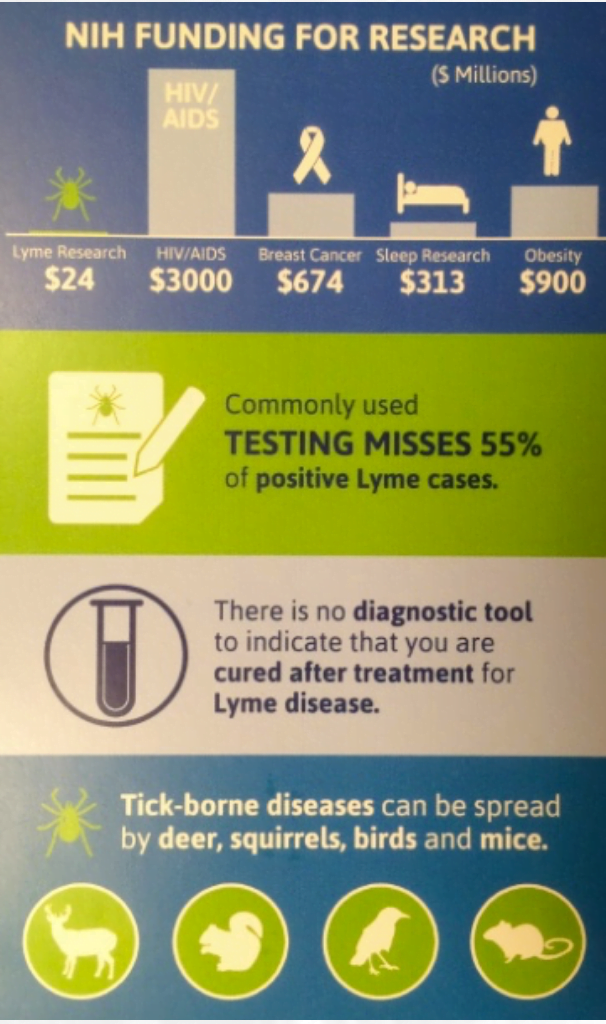 Other speakers at the event, held at the Hyatt Regency in Greenwich, included Blumenthal, who mentioned that last year he had gotten additional federal funding for Lyme disease research and was trying to get more this year.

Carlson, who filed a sexual harassment lawsuit with Fox News last year and received a settlement reportedly in the tens of millions of dollars, also briefly recounted her experience getting Lyme disease. Scott Santarella, the CEO of the Global Lyme Alliance, also spoke.

At a silent auction held before the dinner, the items up for bid included golf outings at the Country Club of Darien and Wee Burn Golf Club in Darien. The swag bags available to guests at the end included a card for a complimentary class at the Bar Method Darien (which posted a photo on Facebook showing some of its customers at the event). 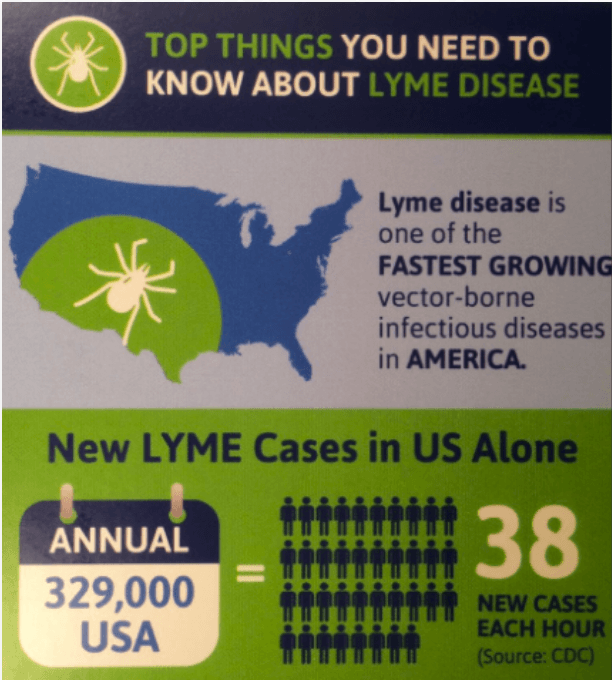 Lyme disease is incredibly important to me, and that’s why I volunteer my time to this organization. I’m so glad to be back this year, so thank you for having me. It’s important to me because I’m a Lyme disease survivor. Five years ago I got a bullseye rash, right here on my forearm.

Unfortunately, when I went to a particular doctor, there was not the immediate diagnosis of Lyme. In fact, I had been traveling in Ecuador, and the diagnosis was ringworm. That was incredibly unfortunate for me because had I been treated at that time, I would have never, probably, gotten full-blown Lyme disease, but instead, six weeks later, I became incredibly ill.

It was actually another doctor who was doing an interview with me on my TV show at the time who said to me, ‘You know, you really don’t look like yourself.’”

“I said, ‘You know, I really don’t feel like myself.’ And I proceeded to tell him in a commercial break, ‘You know, I had this rash —’

And he immediately stopped me, and he said, ‘What did it look like?’

And luckily, I still had a picture of it on my phone, and he said to me, ‘Gretchen, you have Lyme disease.’

“Now here’s the second part of the problem. I went to get tested. And many of you in this room understand that the tests simply aren’t accurate. And so my tests were inconclusive, but luckily that physician started me on the drugs that day, and within seven to 10 days, I was feeling better, and they officially said to me, ‘You have lyme disease.’

“I’m one of the lucky ones, and I also like to knock on glass or wood by saying that I don’t have any symptoms of the chronic disease at this point. But so many other people are affected by this in such a serious way.

And without that reliable diagnostic test […] far too many people are not correctly diagnosed. They go on forever wondering what’s wrong with them. And that’s why the work of this alliance is so crucial, and especially for our kids.

I look at my kids every single day, 13 and 12, and hope that they’re not going to have to go through this.

So, through research and education — that’s why we’re here tonight. And you’re going to be blown away if you haven’t been here before, by the experts in this field and what they’re doing and the great strides that they’re making. […]

Click here to read the original article in its entirety.

The best way to prevent Lyme and other tick-borne diseases is to avoid areas where ticks live. This sounds like a simple solution but turns out to be an impractical one, especially for those of us who love the great outdoors. Here are some practical ways you can reduce your risk of being bitten by a tick.

BE AWARE OF YOUR SURROUNDINGS