Monday started with a bang as a crowd gathered for a ribbon cutting in the new “Innovation Space” at Cos Cob School. The space, which Nancy Schwartz described as a place where it’s safe to fail, was carved out of a part of the media center that formerly housed stacks of books.

Over the summer the space was transformed by Schwartz and Principal Gene Schmidt. The project was made possible by a Reaching out Grant from the Greenwich Alliance for Education, whose executive director Julie Faryniarz was at the event, along with Board of Education chair Barbara O’Neill, Debbie Appelbaum and Jennifer Dayton. Mike Bocchino and the RTM’s District 8 Chris von Keyserling also attended the joyous event. 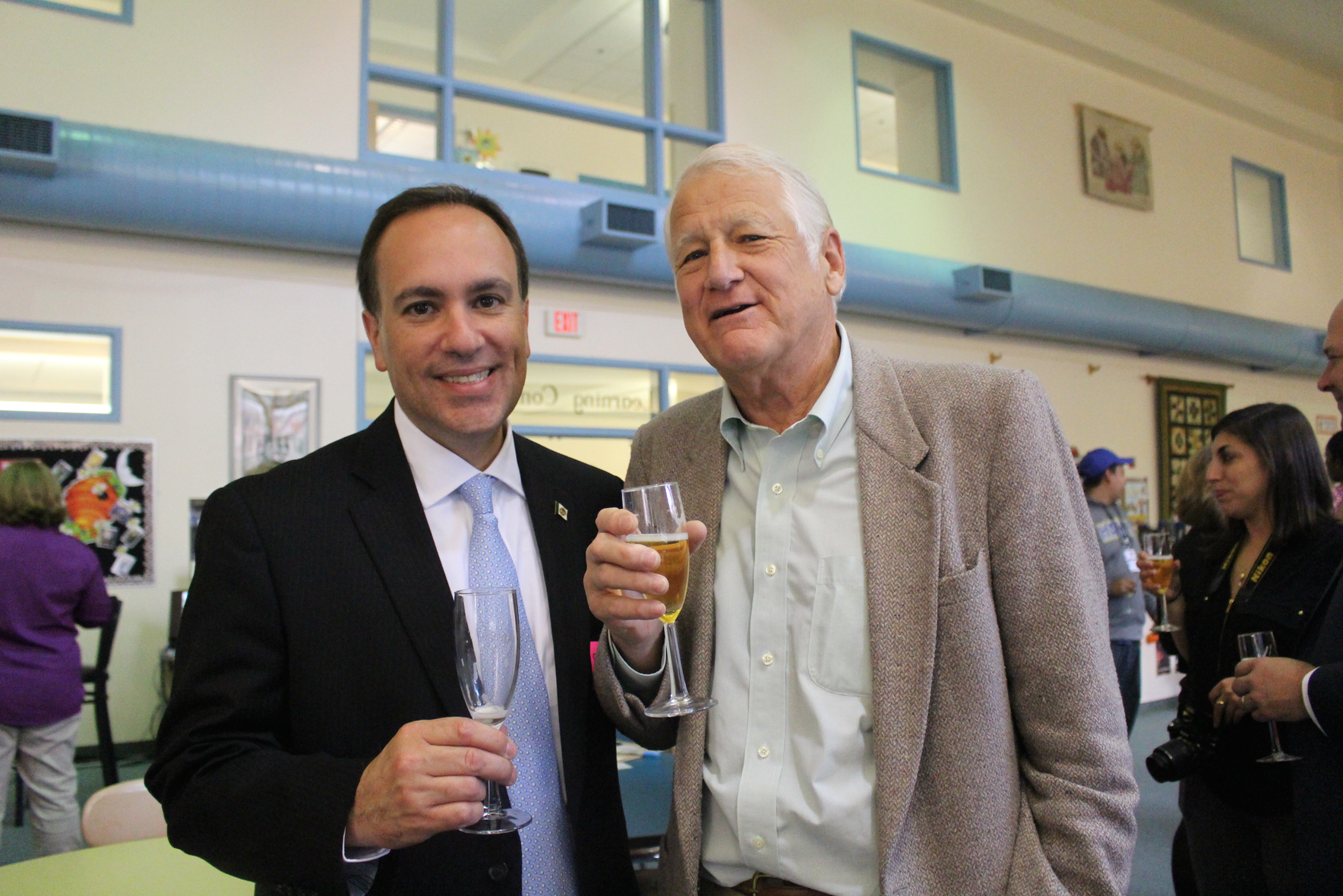 Other local officials who attended included First Selectman Peter Tesei who cut the ribbon and whose children attend Cos Cob School, and State Rep Fred Camillo, who attended Cos Cob school and joked about how he might not have spent as much time out in the hall if there had been an “Innovation Space” when he was a student.

The idea is that Cos Cob’s media center – which had replaced the traditional school library at a time when computers were being introduced in schools – is transitioning into a place where children are as likely to read on their iPads as they are to pick up a book.

“When we first decided to convert this media center into a Learning Commons and Innovation Space to support the digital , we played w the idea of creating this innovation space. After much research and many hours of discussion, we developed a passion for doing this,” Principal Schmidt said.

“We knew if we built it, they would come,” he said of the Innovation Space, adding that in addition to the students, he expects the teachers to come and play. “Playing, passion and purpose is what we expect  from this space. We will foster risk taking in this space and no fear of failure.” 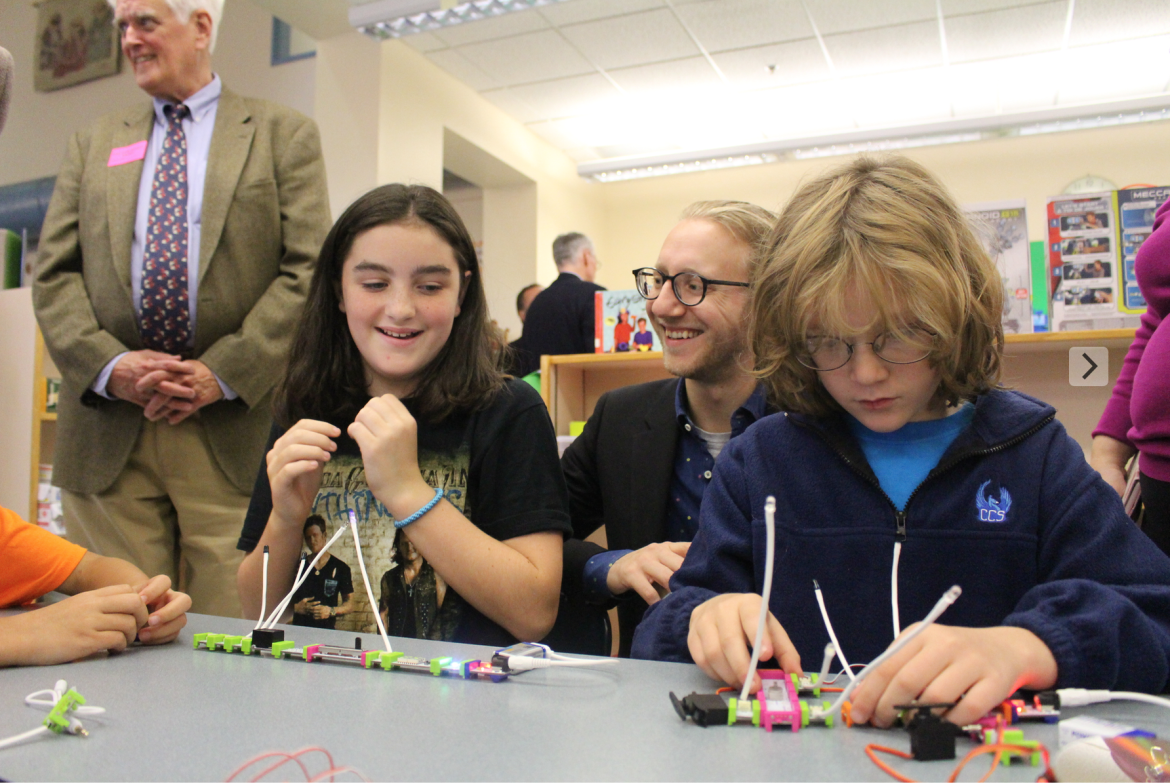 Emily Perna and Harry Manion both 5th graders at Cos Cob School get some help from MacInspire\’s Travis Sluss, Oct. 5, 2015. Credit: Leslie Yager

At the event, Travis Sluss, the owner of MacInspires, with locations in Greenwich and Larchmont, said he has been hired to work with teachers to introduce them to the space and equipment.

Emily Perna, a Cos Cob School 5th grader said she loves the Lego wall the most, but also enjoys the Little Bits electronic kits. “To make electricity , all you need is a battery connected to a p1 power input. Then you can add a keyboard to make sound,” she said, while giving a demonstration. “You can make many electricity things,” she continued while showing several adults how to make a CD spin.

“We all came to the parent open house,” Emily said, adding that a group of 3rd, 4th and 5th graders demonstrated the equipment to parents that night.

Nancy Shwartz from Cos Cob School, spoke about Learning Commons which has been renamed “Innovation Space” in anticipation of collaborations with Innovation Lab. The Innovation Space at Cos Cob School, made possible by a grant front the Alliance. “What we have now is a space for all the students to think creatively Our new slogan is Creation without Fear is our new slogan,” she said. “We want all students have the opportunity to create and fail. And it’s okay to fail because that’s how we learn.” 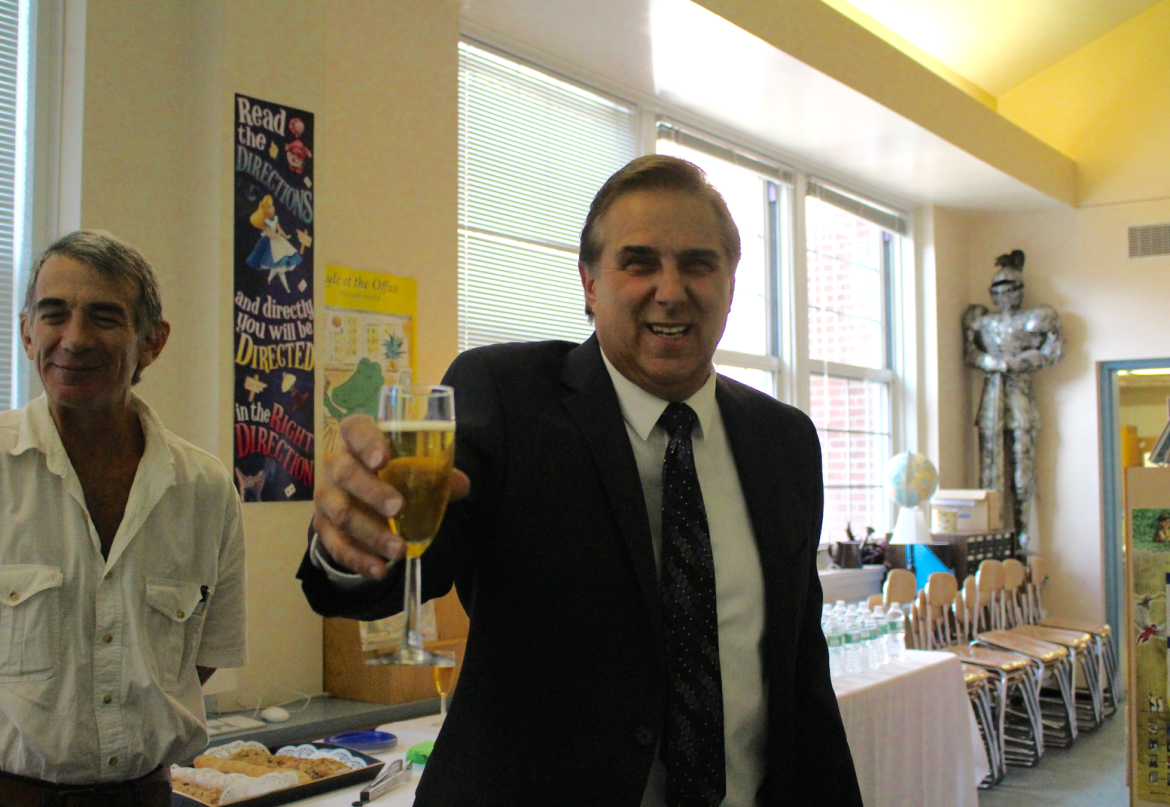 Cos Cob School Principal Gene Schmidt toasted guests with cider on Monday, during a ribbon cutting for the Innovation Space carved out of a space in the medic center that previously had stacks of books. Credit: Leslie Yager 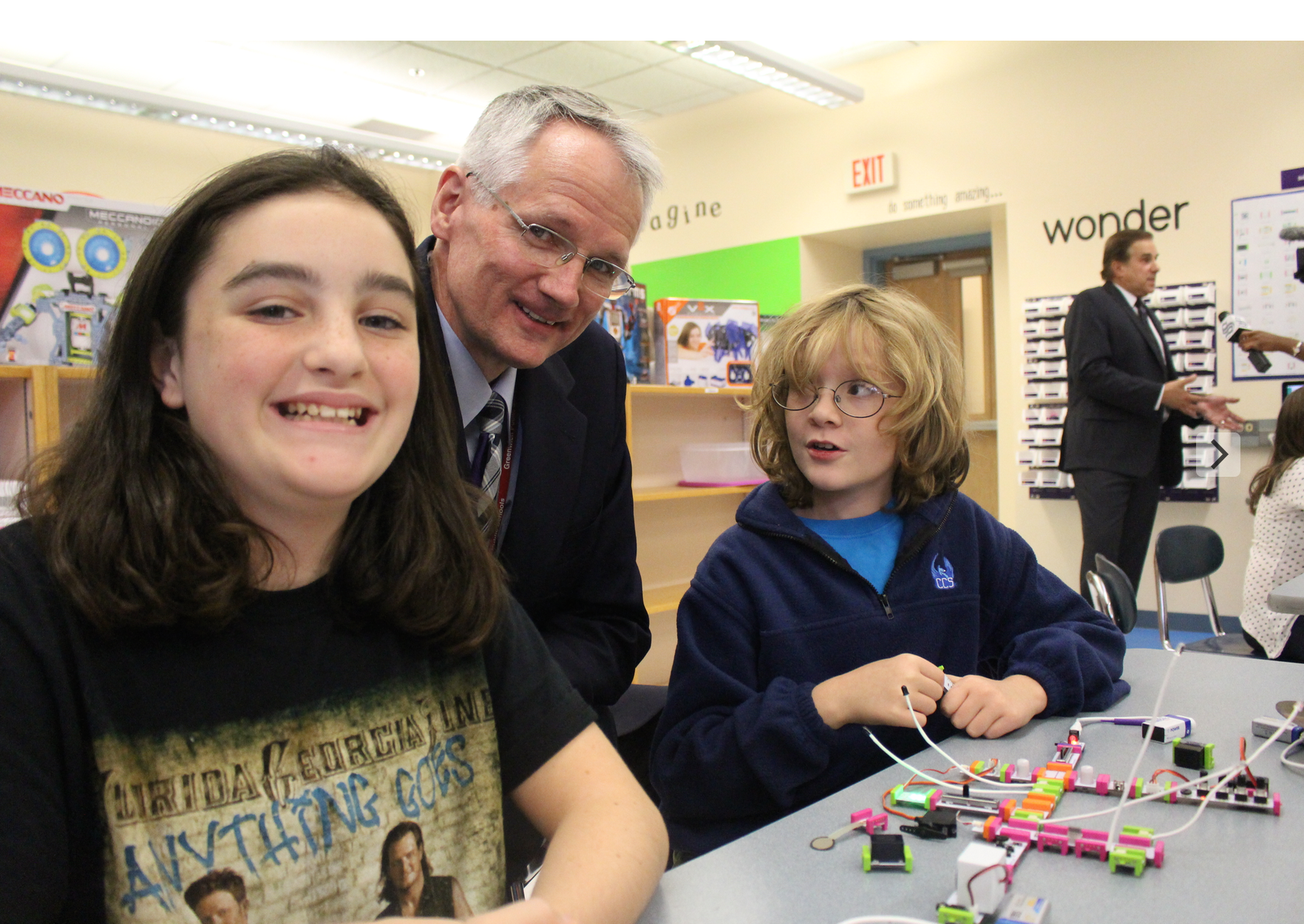 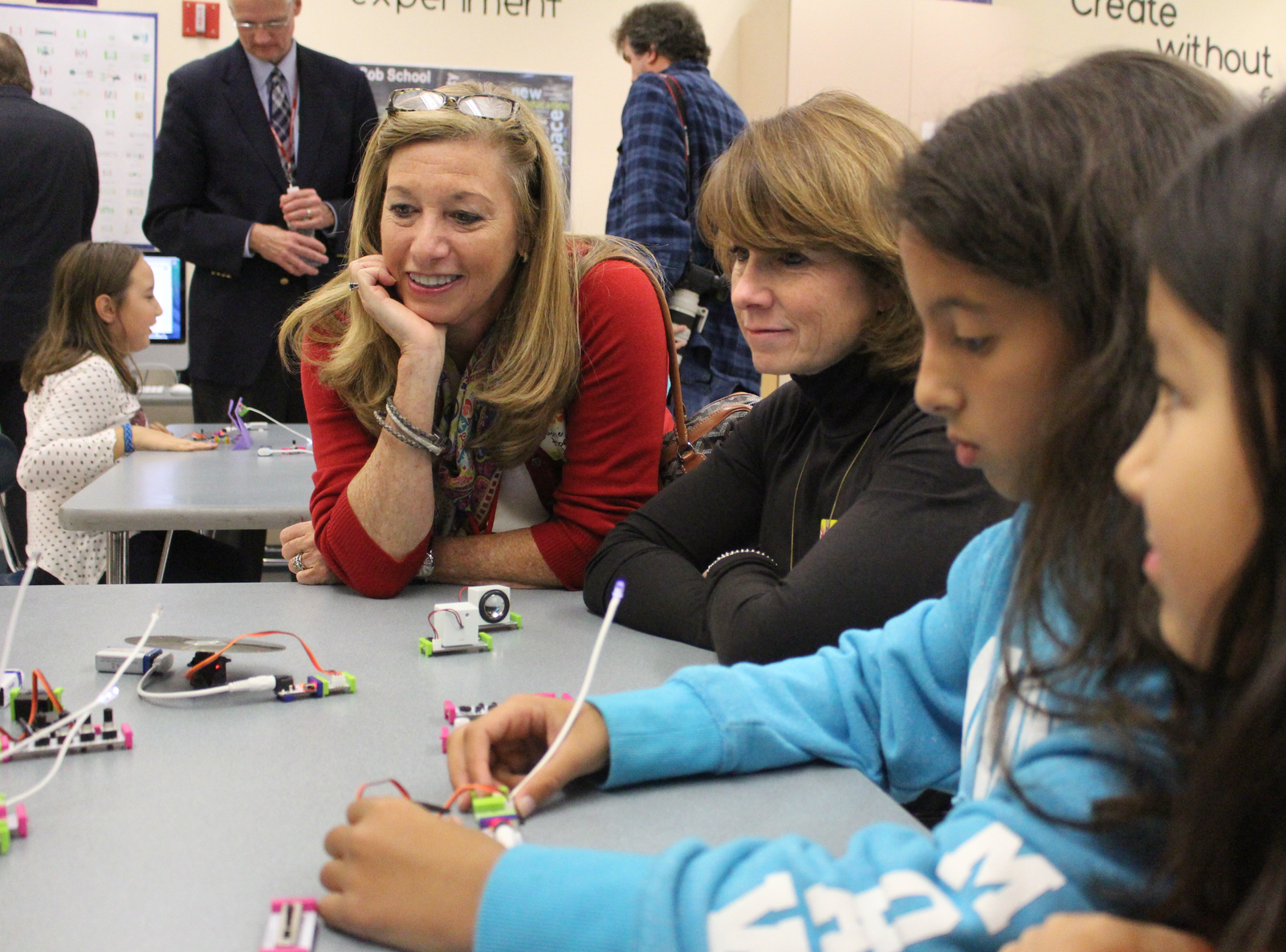 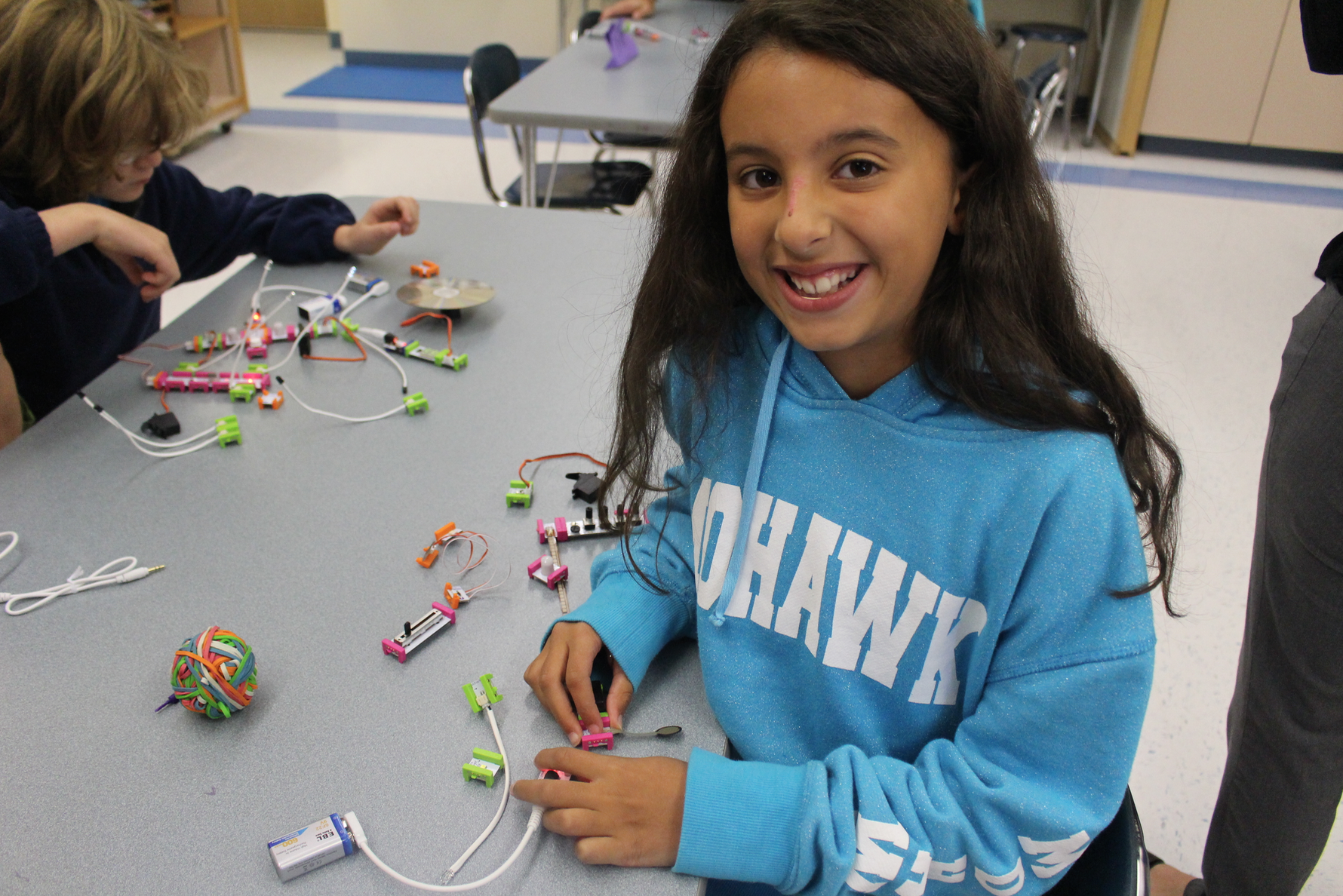 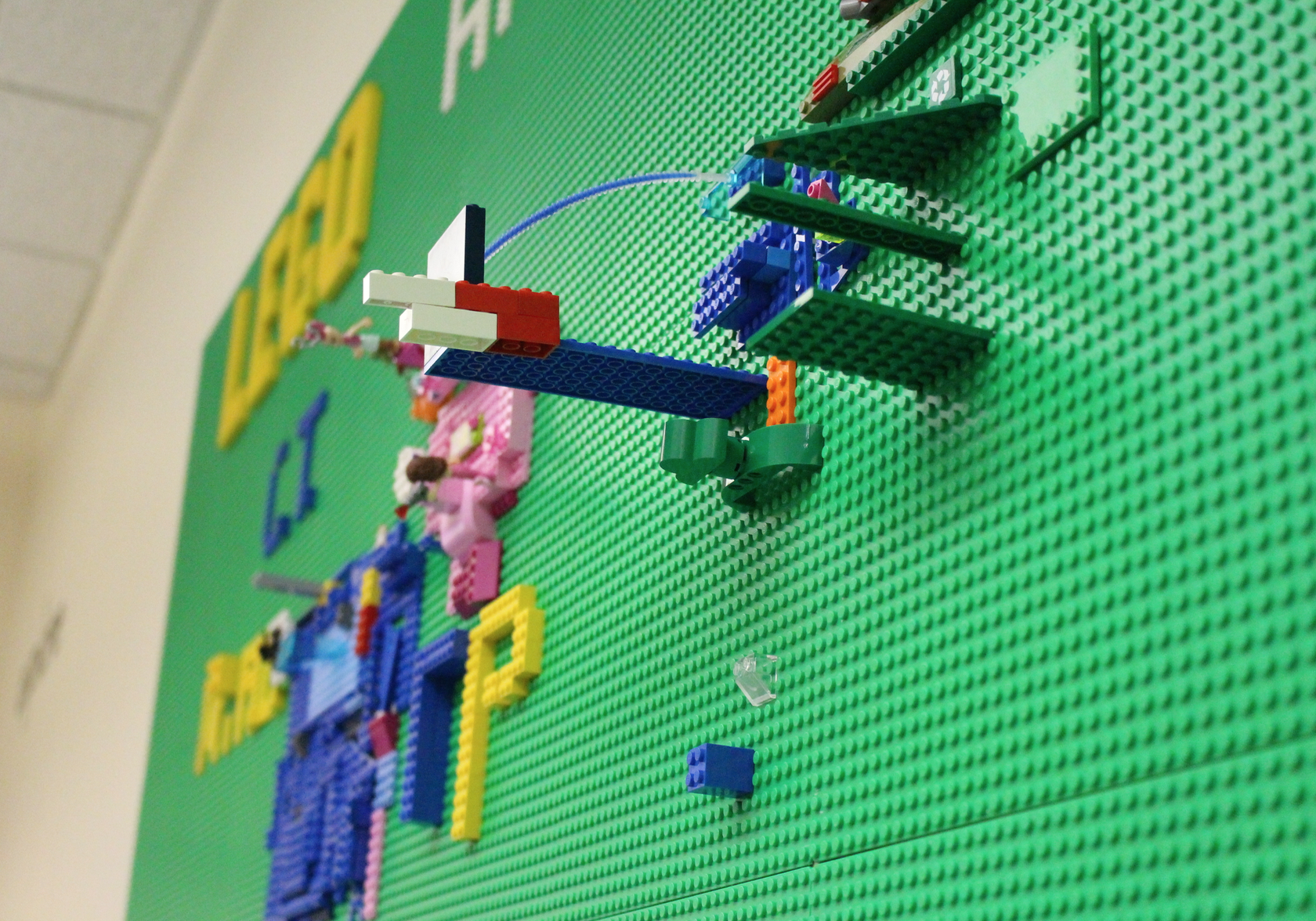 The Lego wall, where children get a physics lesson every day. Credit: Leslie Yager

Cos Cob School Says Farewell to Its Media Center