Dozens of people were charged on Monday in a nationwide conspiracy involving cheating on college entrance exams and the admission of students to elite universities as supposed athletic recruits.

Arrests were made by federal agents in multiple states.

Athletic coaches from Yale, Stanford, USC, Wake Forest and Georgetown, among others, were implicated, as well as parents and college exam administrators.

Among the parents charged were Hollywood actresses Felicity Huffman and Lori Loughlin and numerous CEOs. Greenwich resident Gordon Caplan, who is an attorney at Willkie Farr & Gallagher, an international law firm in New York City was charged by complaint.

Caplan was charged with conspiracy to commit mail fraud and honest services fraud.

According to an affidavit from FBI special agent Laura Smith who is a forensic accountant, the college recruitment scheme took place between 2011 and 2018.

In the scheme clients made purported donations totaling millions of dollars through a nonprofit arm of the The Edge College & Career Network LLC, aka “The Key” called The Key Worldwide Foundation.

The foundation was a front used to launder the money parents paid. A portion of those “donations” were doled out as bribes to coaches and people at testing centers.

Coaches, in turn, designated the children of clients as recruited athletes. The applicants did not even necessarily even play the sport. In one instance described in the affidavit, a student was admitted as a tennis player to University of Texas and even given a “books” scholarship. After starting at UT, the student withdrew from the tennis program and renounced the scholarship.

But in what is possibly the saddest scenario, the answers on the tests were changed by proctors after they were handed in.

“In many instances, the students taking the exams were unaware that their parents had arranged for the cheating,” Smith said in the affidavit.

The victims of the scheme are obviously the students who weren’t accepted to these colleges and universities because they did not have the advantage of cheating, but also the unwitting students, including the daughter of Gordon Caplan, who allegedly cheated her behalf without her knowing.

In one transcribed conversation from a court authorized wire tap, a cooperating witness joked about students’ lack of awareness of the scheme, “…they’re all families like yours, and they’re all kids that wouldn’t have perform[ed] as well, and then they did really well, and it was like the kids thought, and it was so funny ’cause the kids will call me and say, ‘Maybe I should do that again. I did pretty well and if I took it again, I’ll do better. Right?’ And they just have no idea that they didn’t even get the score that they thought they got.”

According to the affidavit, a cooperating witness bragged to Caplan that he had already accomplished 761 “side doors.”

According to the affidavit in November and December 2018 Caplan donated $75,000 to The Key’s charitable foundation in exchange for the test proctor to correct his daughter’s ACT exam without her knowledge.

Like others, Caplan was instructed to seek extended time for his daughter on the exams by purporting them to have learning disabilities and obtaining medical documentation.

That granted them extended time which generally allowed them to take an exam over two days instead of one, and in an individualized setting.

Clients were instructed to change the location of their child’s exam to one of two test centers that were “controlled” – the test administrators had been bribed – one at a public school in Texas and one at a private school in West Hollywood, CA – rather than at their home high school.

Clients were also told to fabricate a reason such as a bar mitzvah or wedding that required their children to switch locations. After the location change, the College Board would send the exams to those test centers via FedEx or UPS and into the hands of the schemers.

In one court ordered wiretap conversation between Caplan and a cooperating witness, the scheme was explained. 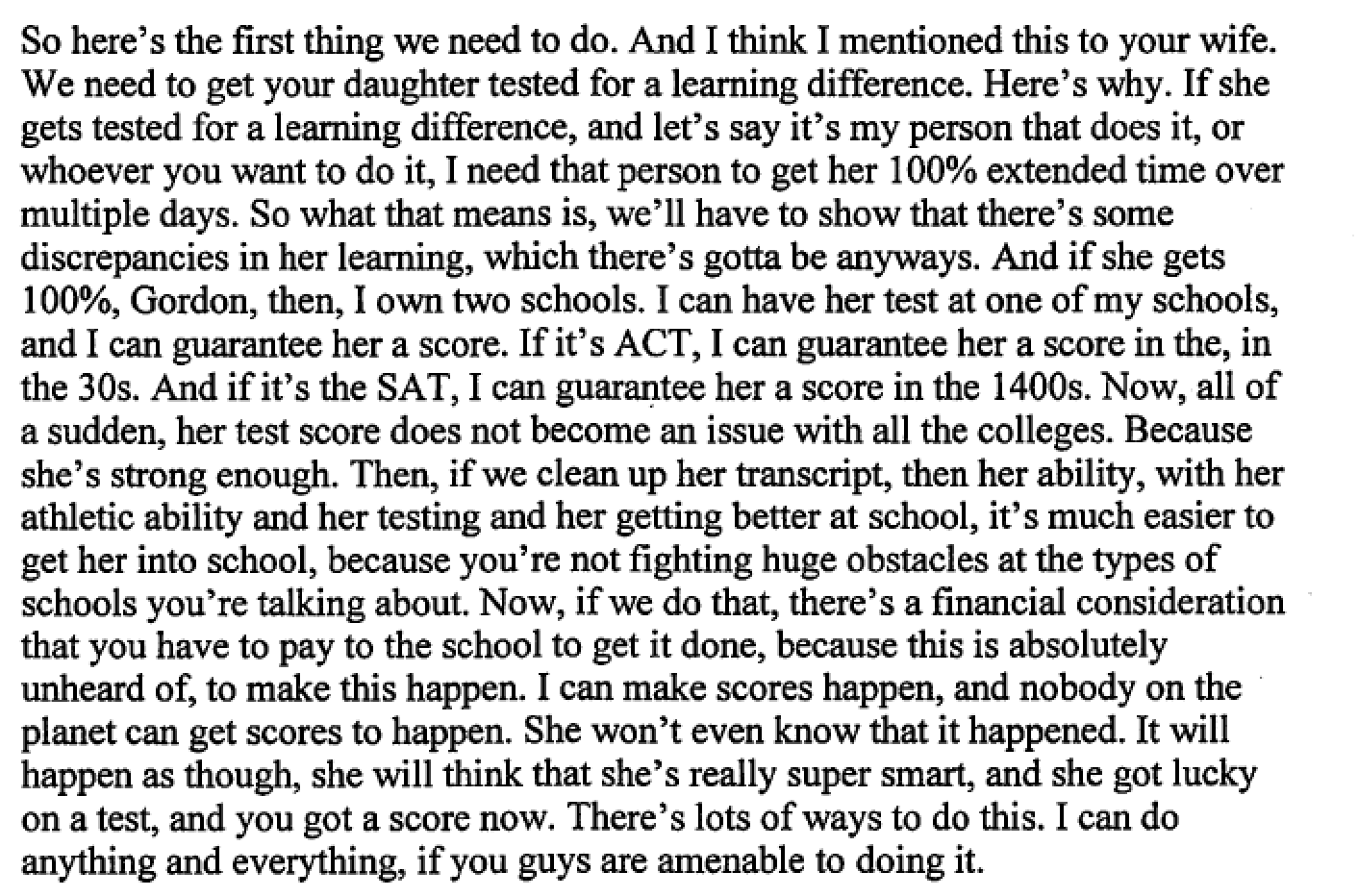 After these conversations, Caplan was later instructed as to the need for his daughter “to be stupid” when a psychologist evaluated her for learning disabilities in order to get the documentation necessary for extended time on the exam.

According to the affidavit, in Massachusetts, college applications were falsified not only to include fraudulent standardized test scores, but also “class grades, and often listed fake awards and athletic activities.”

The scale of this cheating scandal is vast. The 2018 fairness issues of recycled test questions and test answers being leaked online pales in comparison.

Back in the comparably innocent days of 2016, an article in Reuters said cram schools were part of “a vibrant Asian industry that systematically exploits security shortcomings in the SAT” and argued the College Board’s routine practice of reusing material from previous tests makes them vulnerable.

Today, in the case of the Caplans, if the daughter was indeed instructed to “be stupid” for the psychologist in order to qualify for more time to take the standardized test, one wonders if she will be considered complicit in the broader scheme.

For more information go to the Dept of Justice link here, and at bottom see “attachments.”