We first met Cassandra and Michelle three weeks ago at the Girls Who Code event at Second Congregational Church where founder and CEO of Girls Who Code, Reshma Saujani captivated a room full of teens from mostly private schools in Greenwich as she explained the genesis of her non-profit and shared themes from her TED Talk, Teach Girls Bravery, Not Perfection.

On Thursday we visited Greenwich High School and the Girls Who Code Club to see what they’re up to. “Right now we’re working on our entry to the Verizon App competition,” Cassandra said. “We balance our meetings with independent work on Codecademy. It’s a website where you can teach yourself coding.”

“We also do group work and interact with each other,” Michelle said. The club is ten girls strong and the members range from freshmen to seniors.

Cassandra and Michelle, both current juniors, started the club at the end of their freshman year, after having checked out the Computer Programming Club and finding it was mainly boys who already knew about programming.

“We wanted a club where girls could feel comfortable being beginners,” Michelle said. “So I reached out to Cassandra.”

The Club Advisor is Matt Meyers, who teaches computer classes at GHS in addition to chemistry. “It took me about two nano-seconds to say yes when the girls asked me to be the club advisor,” he said during a recent club meeting.

Michelle and Cassandra said they occasionally get surprised reactions about their all-girls club. “A few guys joked at the activities fair, ‘Can I join?'” Cassandra said. “But they also asked us seriously why our club is all girls.”

Cassandra said the reason for the all girls computer coding club is simple. “A lot of girls have a lot of potential in computer programming.”

“A lot of girls are turned off by an all guys club,” Michelle said. 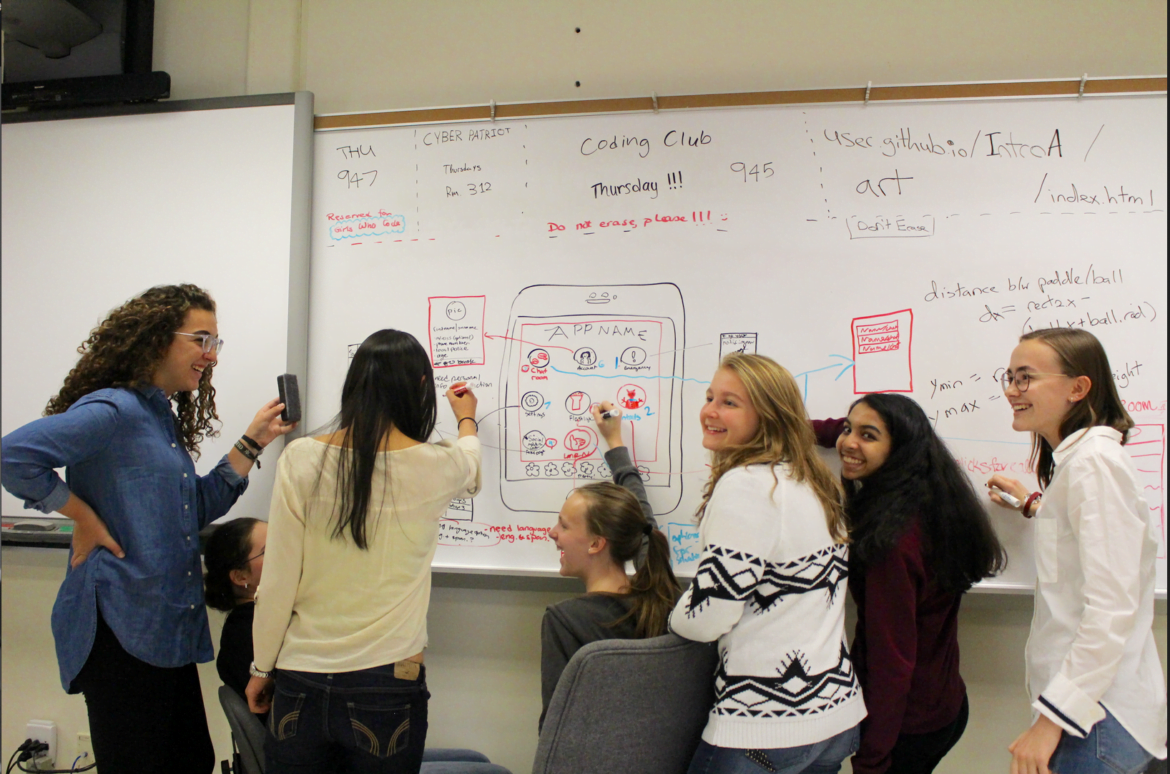 “We’re not a club that just gets together to hang out once a week. We wanted a club where people could learn. We wanted to have a community of girls who can work on projects together,” Cassandra said.

As for the Verizon App competition, Cassandra and Michelle said they’re focusing on devising a multi-faceted app with the theme of of empowering girls.

The concept will include several elements, including teaching safety and self-defense and offering directions to health services. The girls have been tossing around the idea of incorporating the smartphone video feature for a feedback analysis of self-defense moves.

“The Verizon app has to focus on a community,” Cassandra said of the Verizon App competition. “We’re focusing on women from high school to college age.”

“This competition is perfect for our club because most of us are beginners. For the first part of the competition, you need a solid idea of your app including the concept and what it would look like,” Michelle said.

If the girls make it to the next step in the competition, they’ll proceed with the concept. “If we don’t win, we’ll do it anyway,” Michelle said. “Our concept draws on the skills of all the girls in the club. Some are good at karate and self-defense.  Some are good good at digital art. There is someone with good video editing skills. Everyone is invited to bring their ideas to the club.”

“The girls are aiming to divide up the work among everybody,” Cassandra said. “We’re an inclusive club. You can join on the last week of school if you want.” 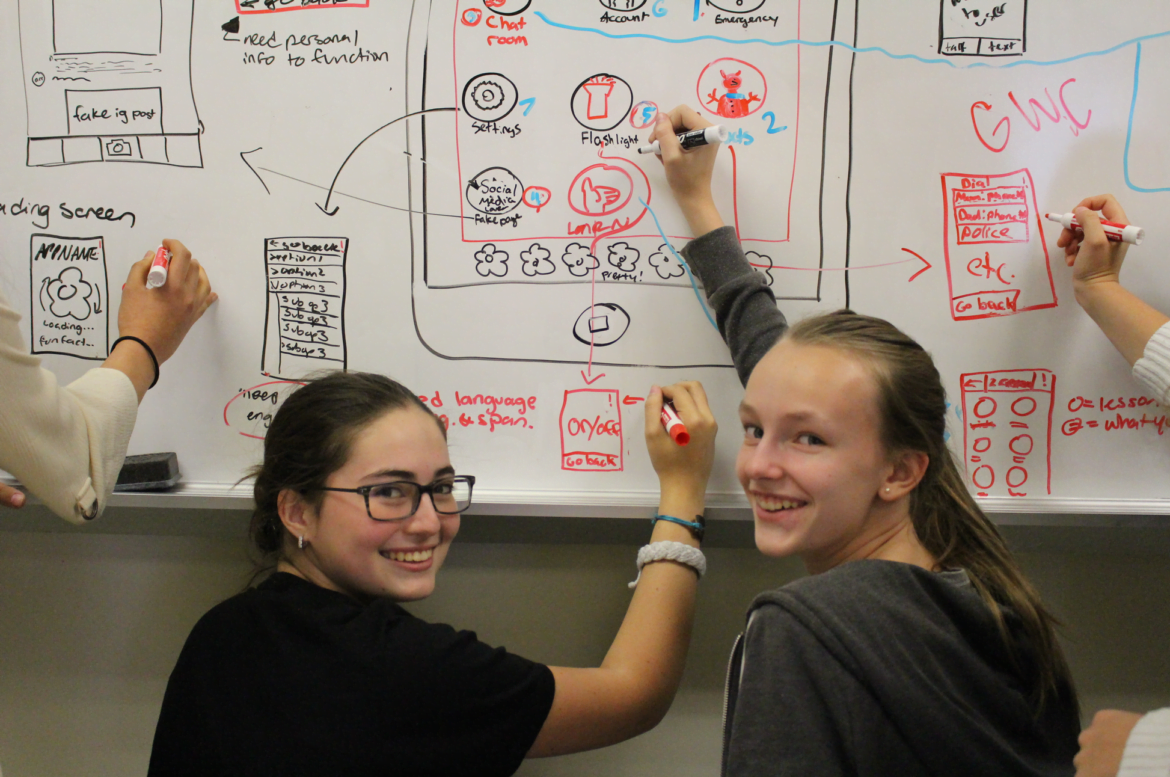 Ariana Ceppi and Julia Marcussen map out ideas for their app for the Verizon App competition. Oct 13, 2016 Credit: Leslie Yager

Looking beyond the Verizon App contest, the girls said they’d also like to work with local grade schools to teach coding.

“When I was in grade school, there was no opportunity to learn computer programming,” Michelle said. “But it’s such an important skill for girls.”

Mr. Meyers, who also advises the computer programming club said that at GHS he was initially a chemistry teacher, but now teaches several computer classes, which are increasingly popular.

Meyers is the right person for the job. Before teaching his first programming class he started a company that made educational apps including the planner app that all HS students use.

Mr. Meyers said that last year GHS held an Hour of Code event in the media center, which roughly 500-600 students participated in. The event involved several hour-long tutorials, and the students became teachers for the day.

In addition to the event inside GHS, Meyers sent some of his GHS seniors to teach tech classes at WMS and CMS.

Of the GHS Girls Who Code Club, Meyers said, “These girls area great ambassadors. Just like the tech industry overall, they just want to help.” 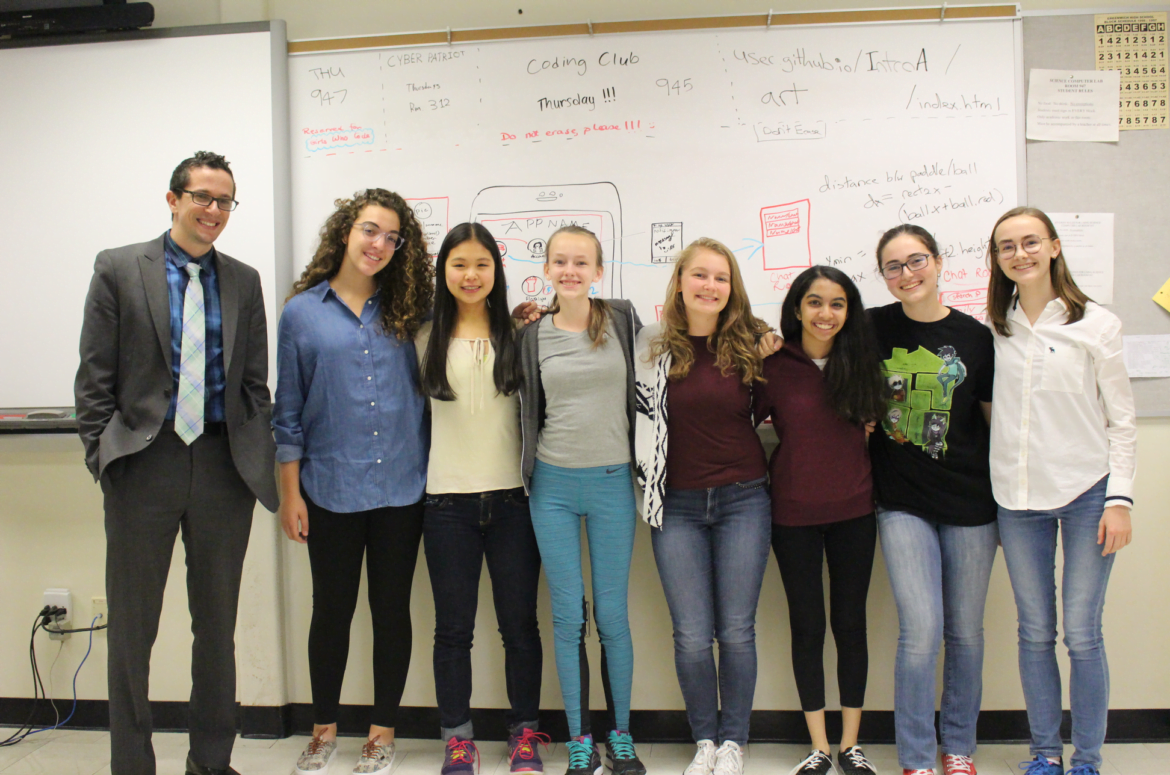