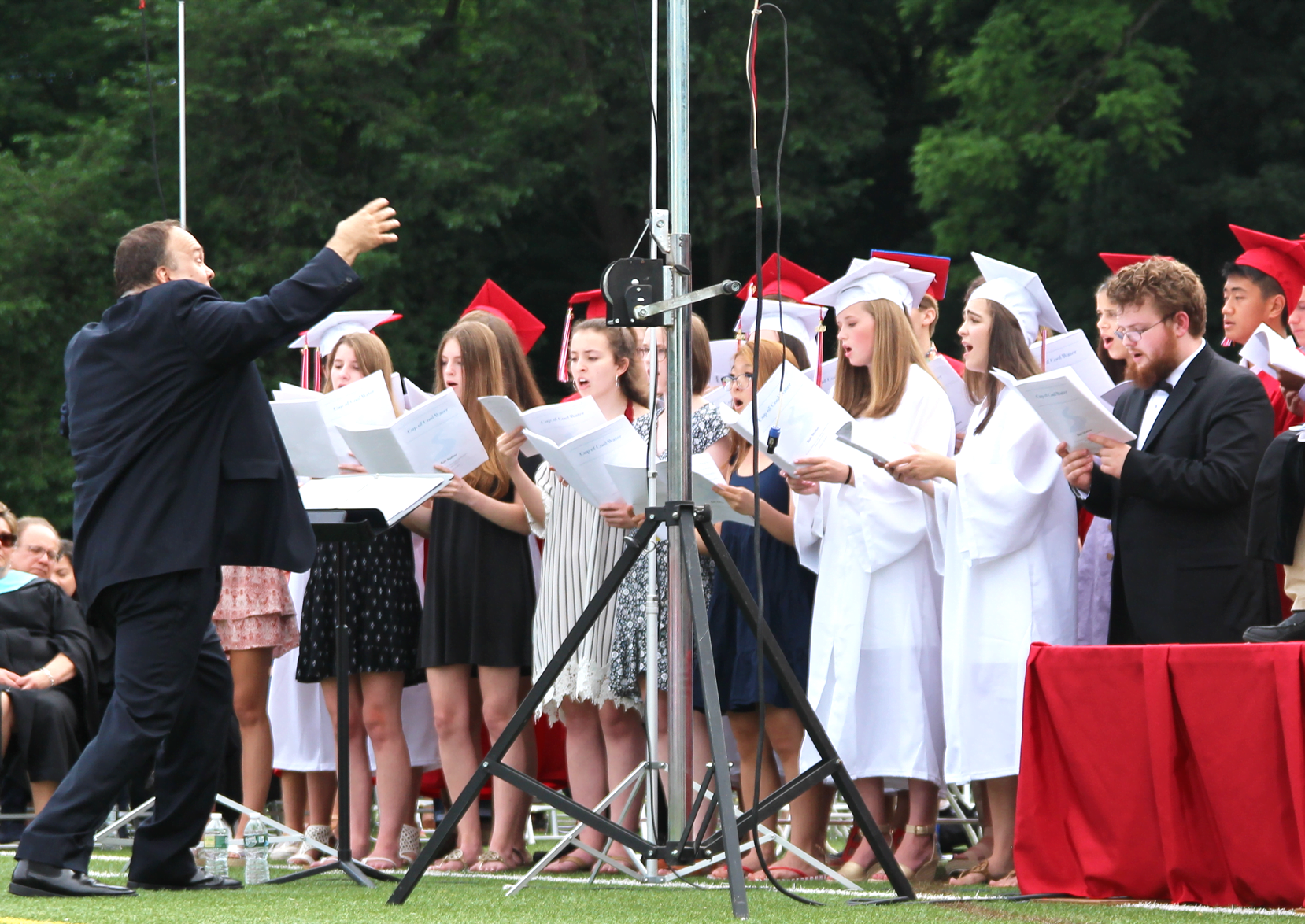 As the ominous clouds that had threatened to move the ceremony indoors evaporated and the sun beamed down on 677 graduates and their families, seated on 1,200 rented chairs, Mathes announced in a full voice, “Quizzes, term papers, early morning practices, all nighters, mid terms, finals, essays, applications and opportunity blocks are over! You’ve done it!” 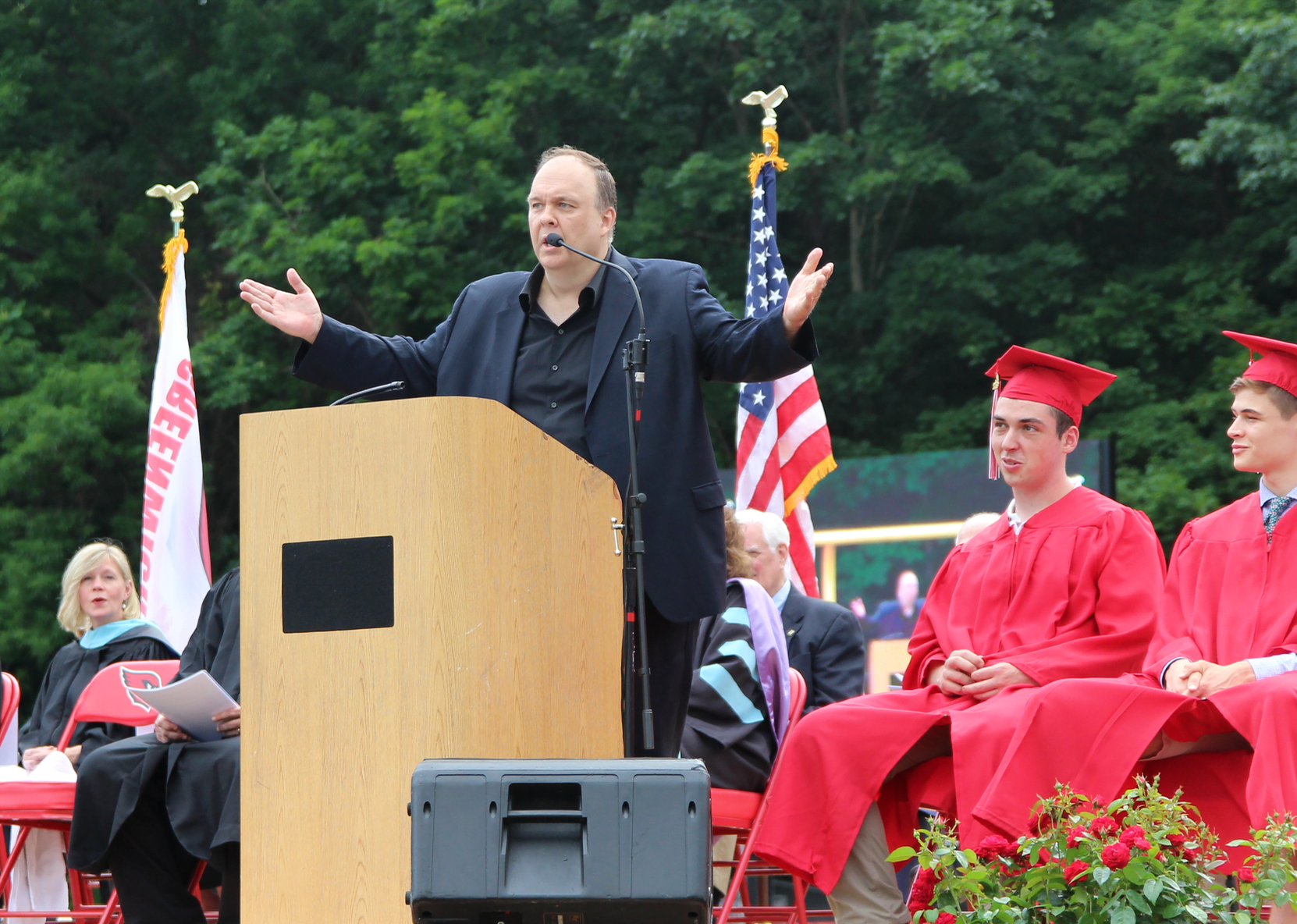 Mathes, who has strong ties to the school, comes from a family of teachers. He said his father George Mathes taught instrumental music from 1970 to 1995 and won the Distinguished Teacher, and that his mother Joan Mathes and her identical twin sister Joyce Kelly have taught piano and bassoon respectively to hundreds of GHS students and are still teaching now at age 85. His late uncle Arthur Kelly taught math in Bella house for 30 years. His mother in law taught English in Sheldon House.

Mathes and his wife Tammy, are both members of the class of 1981, and their three daughters are all GHS graduates, with their youngest, Lily a member of the class of 2019.

He, now an Emmy winning, Tony and Grammy nominated music arranger, composer, producer and director, said back in 1981 his band and jazz ensemble director Carmel Signa and composition and electronic music teacher Ann Modugno were his “north stars,” who gave him encouragement and inspiration. “They are legends to me,” he said, adding that a few years ago, after he co-producing two records for Sting  orchestrating and musically directing Sting’s Broadway Show The Last Ship, he was visited by his north stars.

“Not long after opening night Ms. Medugno and Mr. Signa came to see it. I met them at the stage door and they seemed very proud of me. I said to them, ‘Let me take you inside to meet Sting. He knows you’re here,'” he recalled. “This is Sting, 16 time Grammy winner, Rock and Roll Hall of Fame member formerly of the legendary band, The Police.”

“And they did not seem at all excited. With that firm and direct voice of Ms. Medugno’s that I remember from senior year, I heard, ‘We are not here to see Sting. We came all this way to see Robby Mathes.’ I’ll never forget it.”

His fondness for Greenwich High School came through. “I love this place,” he said.

As for his advice to the class of 2019, he demurred. “You’re smarter and quicker, and you deal with a much more complex world,” he said.

Instead he shared advice to his 18 year old self. “Ssshhhh, chill out. Listen. People around you have entire worlds to offer up. Listen hard.”

Second, he said, “Be kind to yourself. Give yourself a pass every once in a while. Your future will not be a straight line. You will screw up.”

“I was a total goofball in 1981, and somewhat pleased with myself,” he said, adding that his band was called ‘Revelation.’

“Which by the way is a terrible name for a band. Not even a Christian rock band would call themselves Revelation,” he joked, adding that the band’s repertoire included 1 song by Lynyrd Skynyrd, 2 songs by The Beatles, 1 song by Blue Oyster Cult and 27 songs by the Doobie Brothers.

“The Doobie Brothers were a great band, but Led Zeplin they were not,” he said, going on to make fun of the lyrics to songs he wrote back in 1981.

Mathes said after high school his plan was to go to Berklee College of Music, put together a band and get a record deal.

He described an incident  during freshman year that would serve to change his “grand plans.”

At Berklee he went to the tape library one night and turned in the catalog number for a classic jazz record by John Coltrane.

“I put the tape in and immediately heard an orchestra. Very confused, I was about to get up and bring the tape back and ask the librarian, ‘What the hell is this?’ But something stopped me. I listened. These were sounds I had never heard before. This was not John Coltrane, nor was it Beethoven, which my parents played incessantly. What was it? It was Gustav Mahler’s 6th symphony and it was amazing.”

“I still planned on getting that record deal, but I had to understand what was behind those sounds, that music. I left Berklee to study with a classical composer named Myron Fink, and it led me down a winding path,”he recalled.

He said he learned how to write for strings, horns and choir, and met legendary record producer Phil Ramone who had produced Paul Simon and Billy Joel, Frank Sinatra, Pavarotti and Tony Bennett.

“Fortunately for me he got me to work with all of those people in one capacity or another. That led to working with other heroes like Bruce Springsteen and Stevie Wonder, Yo-Yo Ma and Elton John,” Mathes said. “I eventually musically directed the Obama inauguration. How in God’s name did that happen? All of this because I didn’t take a recording back to the librarian at Berklee. I listened, and it changed everything.”

Mathes said he never got a record deal.

“Record companies would listen to my songs and say, ‘It’s music for musicians. Radio won’t play it.'”

“I went to bed with tears in my eyes more than a few times. Looking back it seems meant to be. Eventually I got to work with legends. But tell that to someone in their 20s without a crystal ball,” he said. “I felt like a complete loser. And the tougher I was on myself, the worse I behaved towards the people around me.”

“You are going to drive down dead end streets both personally and professionally. Your path will be circuitous. Be kind to yourself and by connection,the people around you. That constant voice of self hatred back then was incredibly debilitating. You do need to be tough on yourselves sometimes, but not to the point where you are incapacitated.”

Mathes said one of his greatest teachers at GHS was an English teacher named Anton Anderson.

“He was a shining example of kindness and patience. I turned in a half-assed paper once, and he told me that it was not at all good. But he added that there is something in there that is. It’s the part that feels like it comes from you. You have time. Develop that and you’ll be great. I wish that the voice inside of you will sound more and more like Mr. Anderson’s – a discerning but kind voice.”

Mathes repeated his advice of dead ends and winding roads.

“Follow your dreams,” he said. “And put the damn phone down!”

“Realize that truly great things on planet Earth – in the arts, in sports, in business, in public policy – are only created by groups of people working together in community, who listen to each other, take care of each other, and are kind to each other. Our paths are winding and circuitous. You’ll be alright. It’s okay.”

Mathes wrote a song in honor of his daughter Lily’s graduation called A Cup of Cool Water, which was performed by the GHS Chamber Singers.

“Each of you is a cup of cool water, and I celebrate you,” he said. “Go rock this world. Thank you.” 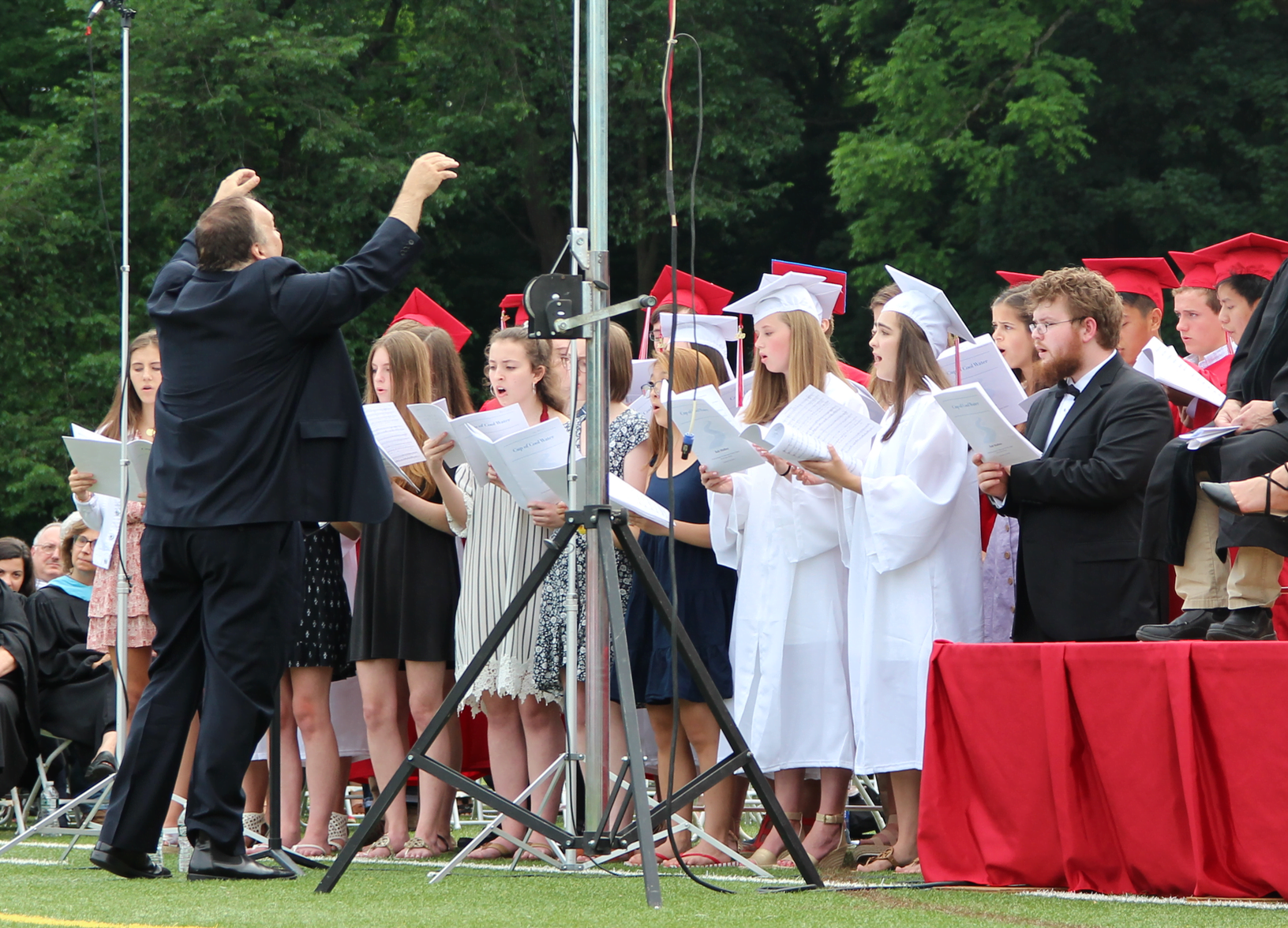 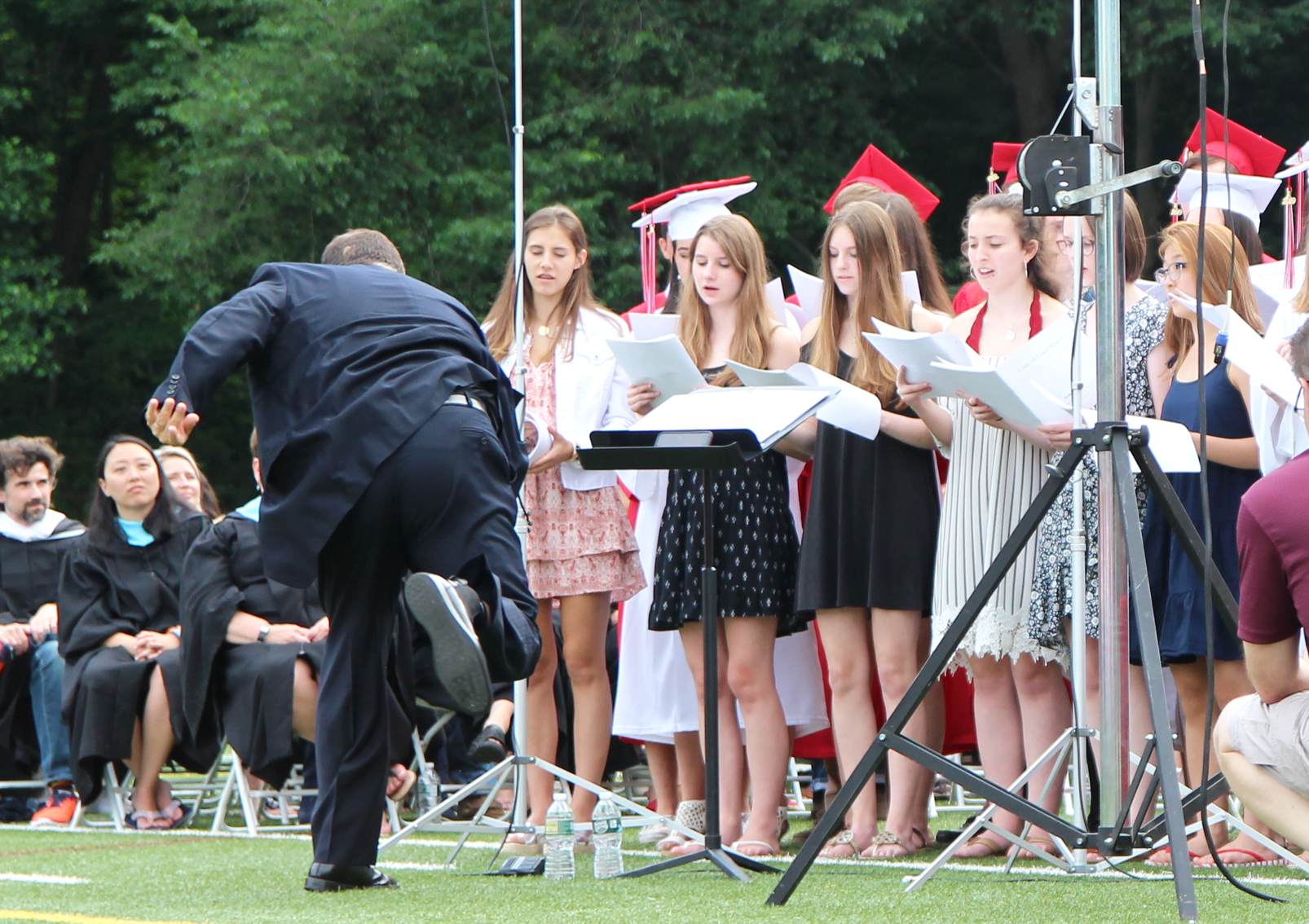 Kitselman Celebrated as Greenwich Schools Teacher of the Year

Outpouring of Gratitude for Ralph Mayo, “Everybody Knows Ralph”