The Board of Education gathered at the Havemeyer building on Thursday night to consider a gift from the Greenwich Athletic Foundation that would shore up the condemned bleachers at Greenwich High School’s Cardinal Stadium to the tune of $120,000.

The funding will make it possible to shore up the bleachers on a temporary basis. The gift includes funds to lease the equipment for four months.

GAF member Rick Kral said, “This rental could be all the way through two years. There is no deadline. It is $6,200 a month to lease the equipment, and there is a lot of equipment.”

In mid April, at the beginning of school vacation week, interim Superintendent of Schools Ralph Mayo announced that the home side bleachers, which are about 50 years old, would be closed immediately because they were not up to code.

The District’s engineers and the Town’s building department both conducted inspections and concurred that the bleachers need to be brought up to current building codes.

The bleachers were roped off and have been off limits since April.

In April the immediate concern was how the roped off bleachers would impact graduation for the GHS class of 2010. Per tradition, when weather holds, graduation is held outside on the stadium field with the bleachers packed with families. 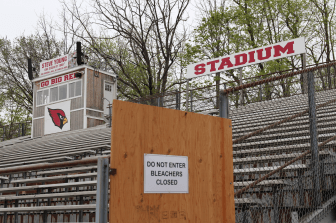 Students were upset at the possibility that graduation would be indoors and broken into two ceremonies to accommodate families in the performing arts center.

At the April BOE meeting, senior class president James Heavey said, “My classmates have been completely rattled by the mere idea that we will not be graduating together.”

The district wound up renting 2,100 chairs and lining them up on the stadium’s turf, which was a gamble considering if it had rained the ceremony would have been moved inside.

The sun came out just in time and the chair rental scenario wound up being a success.

On Thursday nigh the Board of Education members each expressed their gratitude, including Barbara O’Neill.

“Thank you for your perseverance for the hurdles we put in place when people try to help us,” O’Neill said to the members of the GAF who were present – Rich Fulton, Rick Kral, Randy Caravella and Rob Burnett. “I hope in future you’ll have a seat at the table so you’ll have a direct voice and not come in as an extra.”

Ms. O’Neill noted the GAF members have “amazing” experience and both “knowledge and contact with the people in the sports community that is very valuable.”

Greenwich Schools Chief Operating Officer LoriAnn O’Donnell said there had been only one bidder for temporary bleachers and that option didn’t include retaining the press box.

“We’re happy the GAF is supporting us in services and the shoring of the structure for four months,” said BOE chair Peter Bernstein.

Mr. Kral said the GAF had submitted copious documentation and a complete engineering study by certified Connecticut engineers to the Town’s building department.

Kral said the vendor, Waco Scaffolding, based in Cheshire, CT, is a town approved vendor who passes the Board of Education standards and requirements.

He said the company is ready to start the project the second or third week of August and the work would take approximately 15 days to complete.

“Once the structure is completed and inspection done, we should be able to use the structure and press box, and the GAF gift will include four months of lease which can be extended on a month-to-month basis,” he said.

“I’m so grateful to your organization for stepping in to this emergency situation,” said BOE member Jennifer Dayton.

“That didn’t facilitate the needs of the program and the costs were $90,000 per season. That would have been $180,000 a year for those bleachers which were inadequate, and more for the press box,” Kral said adding that the total would have been close to $400,000 a year.

Kral said hopefully the head of the building department Bill Marr will be able to review the proposal within 7 to 10 days.

“We’ve pre empted the normal delays. Once we have his approval we’ve asked Waco to pencil us in for the middle of August,” he said.
They’ve done that as a courtesy to us.”

“I told them we had to be done by September 7. The first home football game is Sept 14 and that builds in a week of leeway,” Kral added. “I don’t think they’d be done before the first day of school, but it shouldn’t encumber the students in any way.”

Board member Kathleen Stowe said, “I’d like to pile on the accolades. This is a no brainer.”

“I can’t thank you enough,” said Peter Sherr, who made a motion that the BOE approve the $120,000 donation for the bleacher repair and four months of rental for the equipment.

The motion passed unanimously and the meeting was done in just a half an hour.

Anyone who would like to support the Greenwich Athletic Foundation by donating to the bleachers project can make a donation online.

Or send a check and how you would like your donation listed to: