The highlight of Thursday’s Board of Education meeting was a vote on creating a committee to work in short order on a plan the BOE could vote on to upgrade Cardinal Stadium at Greenwich High School.

But not before new members were sworn in and a vote was taken on new officers. Peter Sherr and Karen Kowalski voted together consistently, first abstaining from the vote a chair.

Kathleen Stowe and Karen Kowalski were both nominated to be vice chair.

For secretary Karen Hirsh was nominated. Peter Sherr and Karen Kowalski again abstained. The six others voted for Ms. Hirsh. 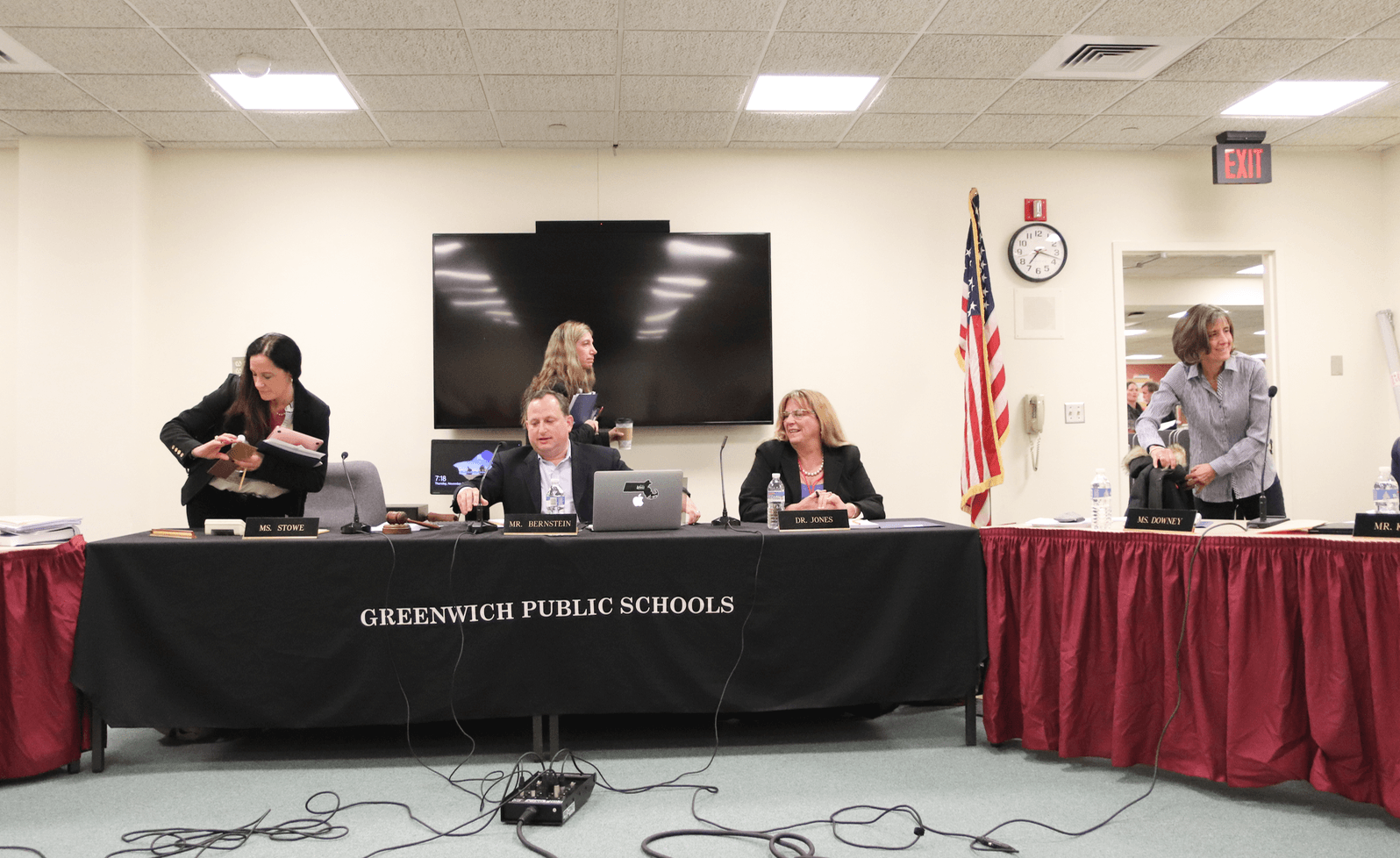 After the awkward shuffle of seats took place, public comments includes many voices urging the board to proceed on upgrades to Cardinal Stadium.

The stadium does not have rest rooms.

It is not ADA complaint.

The bleachers are being held up with temporary scaffolding.

After the bleachers were condemned last April, the BOE in July accepted a $120,000 gift from the Greenwich Athletic Foundation in the form of installation of temporary scaffolding, plus six months of rental, which expires at the end of December. 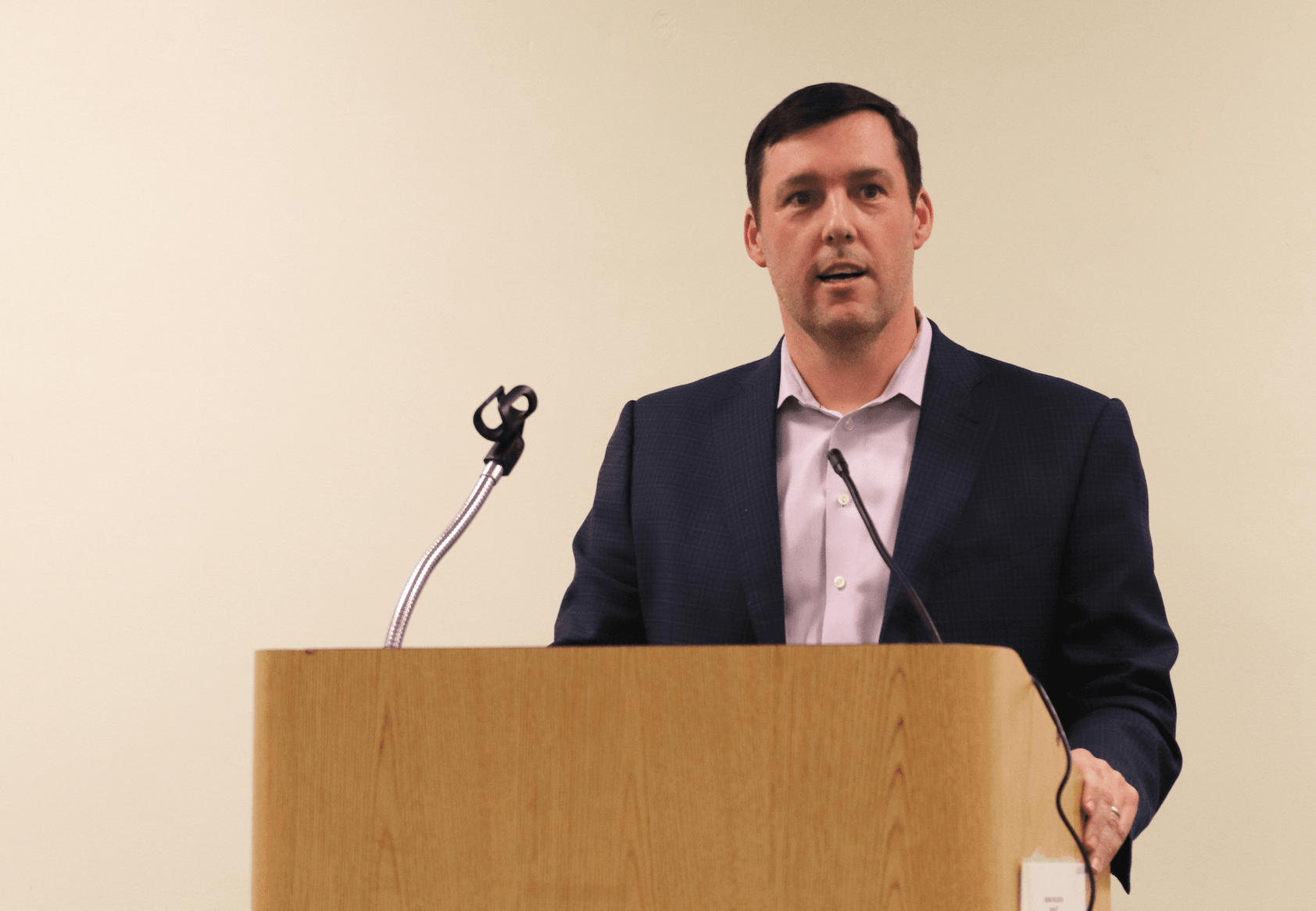 During public comment Rob Burton, president of the GAF and a lifelong Greenwich resident and 1993 GHS grad and former football player, said the organization pledged to raise $1,000,000 toward upgrades to Cardinal stadium.

“We have worked closely with administration for the past few weeks to develop a comprehensive plan for Cardinal stadium,” Burton said, adding they had taken into consideration concerns from the community about handicapped parking, ADA emergency vehicle accessibility, adding restrooms, and maximizing the space under the  bleachers for locker rooms,  bathrooms, storage and educational space.

Burton said the GAF plan is not only fiscally prudent, but he noted that over 3,300 people have so far signed the GAF petition in favor of Plan F, an “Under the Bleachers” plan.

He added that the proposal had the support of incoming First Selectman Fred Camillo, “countless members of BET and RTM,”  and support from varsity athletes who were present at the meeting.

“We believe that this work could happen quickly,” Burton said.  “The time is now to improve Cardinal Stadium. We’ve gotten 50 years out of the current bleachers – 50 years!”

“Golf carts are not a solution to accessibility,” said Laura Kostin.

Michael Chambers said the stadium has suffered from years of neglect.

“The athletic facilities have been ignored and it’s tragic that residents of the town have to step in and take care of infrastructure that the town hasn’t taken care of,” Chambers said. 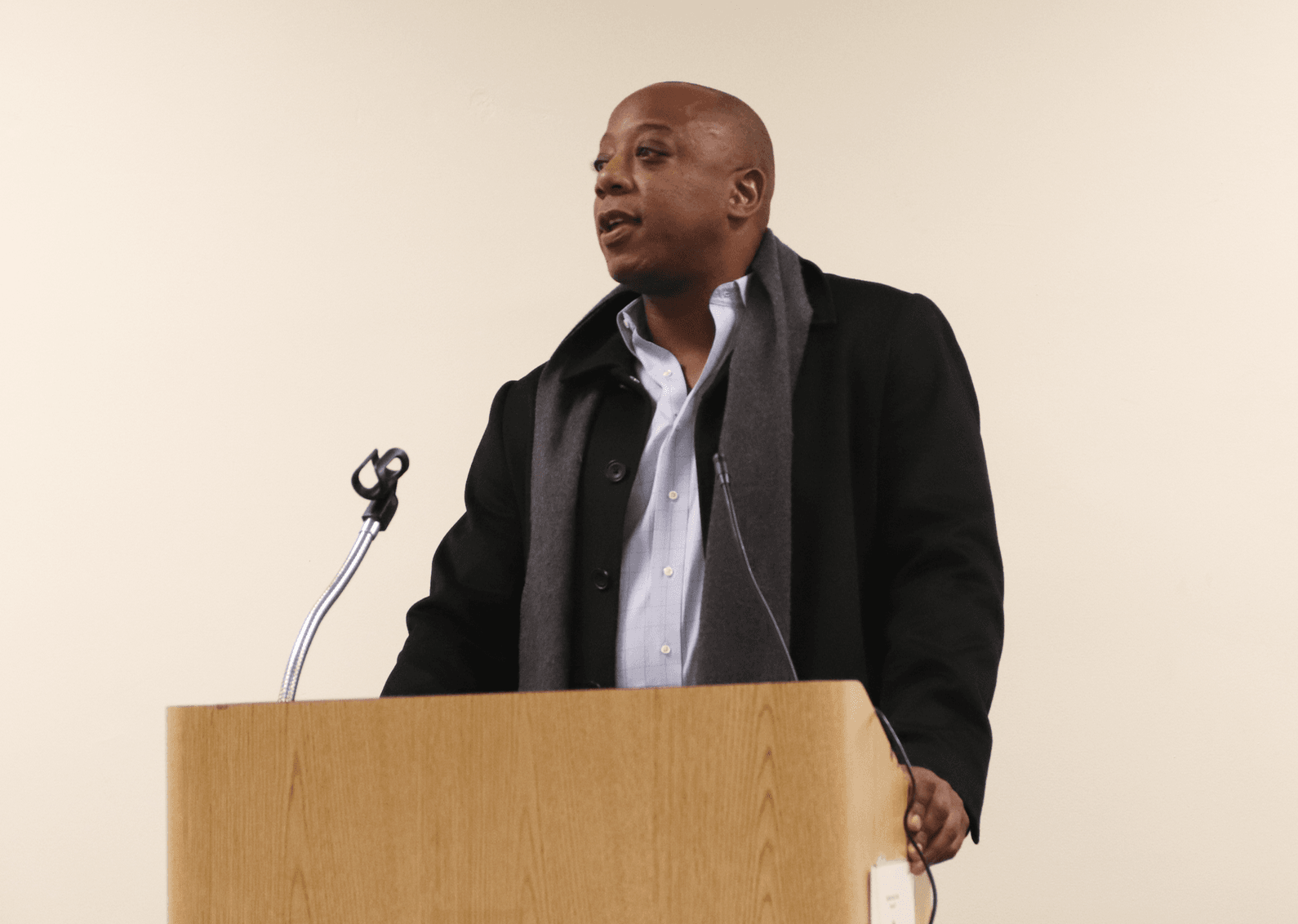 Michael Chambers called it tragic that residents of the town have to step in and take care of infrastructure. Nov 21, 2019 Photo: Leslie Yager 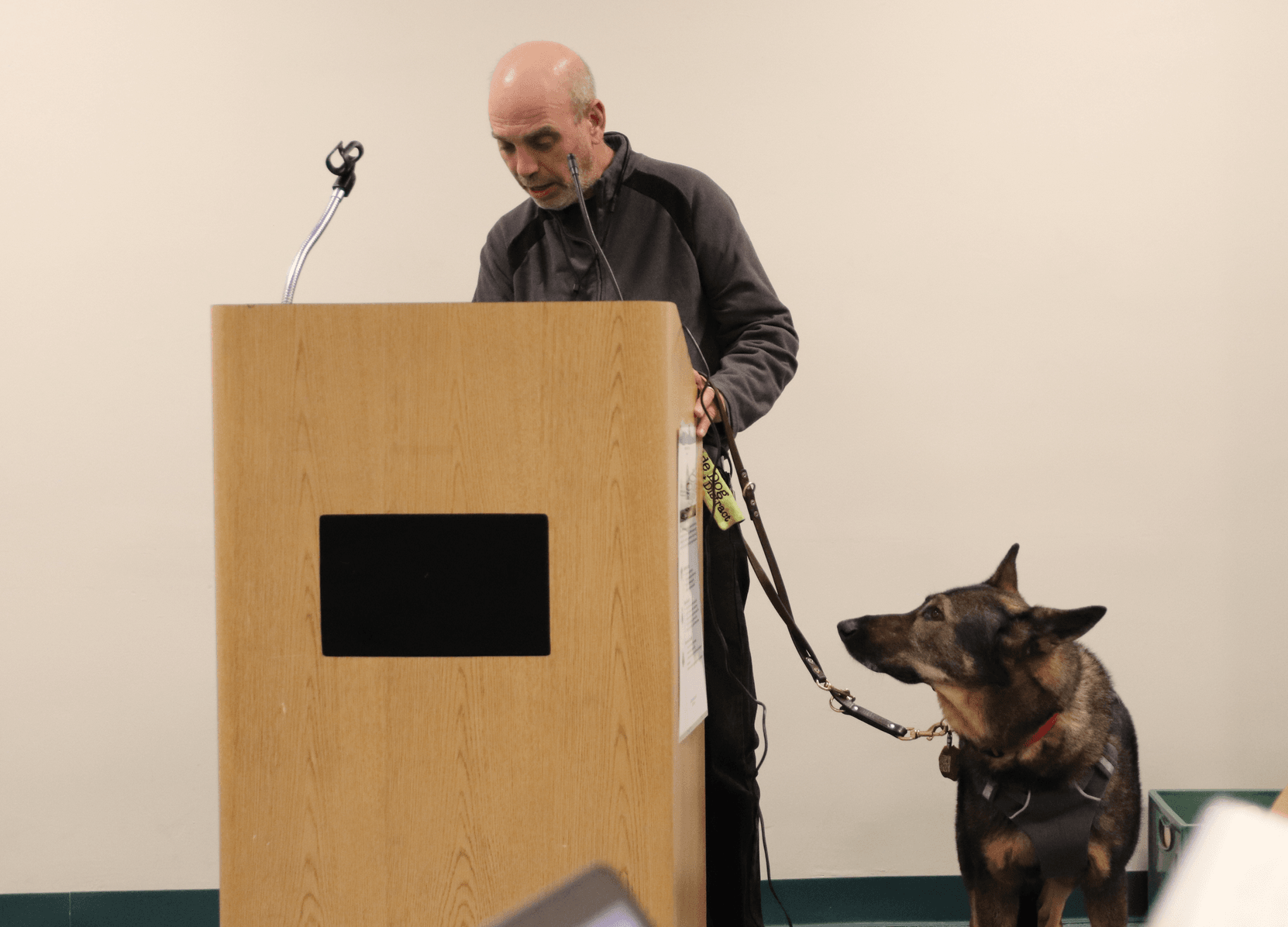 Alan Gunzburg said if there is no parking in the stadium, then the stadium is not ADA compliant. Nov 21, 2019 Photo: Leslie Yager

Alan Gunzburg, from the First Selectman’s Advisory Committee for People with Disabilities said he was concerned to hear talk about  “accommodating” people who need to get them from parking to the stadium.

“Title 2 of ADA does not allow for accommodations,” Gunzburg said. “Accommodations are only allowed under Title 1, which has to do with employment. If there is no parking in the stadium, then the stadium is not compliant.”

Stephanie Cowie quoted a friend, Codi Darnell, who uses a wheelchair, describe the experience of coming to Cardinal Stadium: ‘I want to paint a picture, first of the exhausting roll to the stadium from handicapped parking spaces by the gym. I challenge any one of you to try this in a wheel chair. Once I arrive at the stadium I go by myself to the fence to watch the game. I am no longer part of the experience. Many times I say to myself, why am I even here? Friends and family are together in the stands. It’s all I can do not to break down and cry. I watch the game through a fence – not over, but through a fence.’

Cricket Dyment said PTA Council has consistently advocated for rest rooms, changing facilities, and ADA accessibility for the stadium, bleachers and press box. They are also advocating for a secondary egress and exit from the GHS campus to improve traffic flow and improve security. 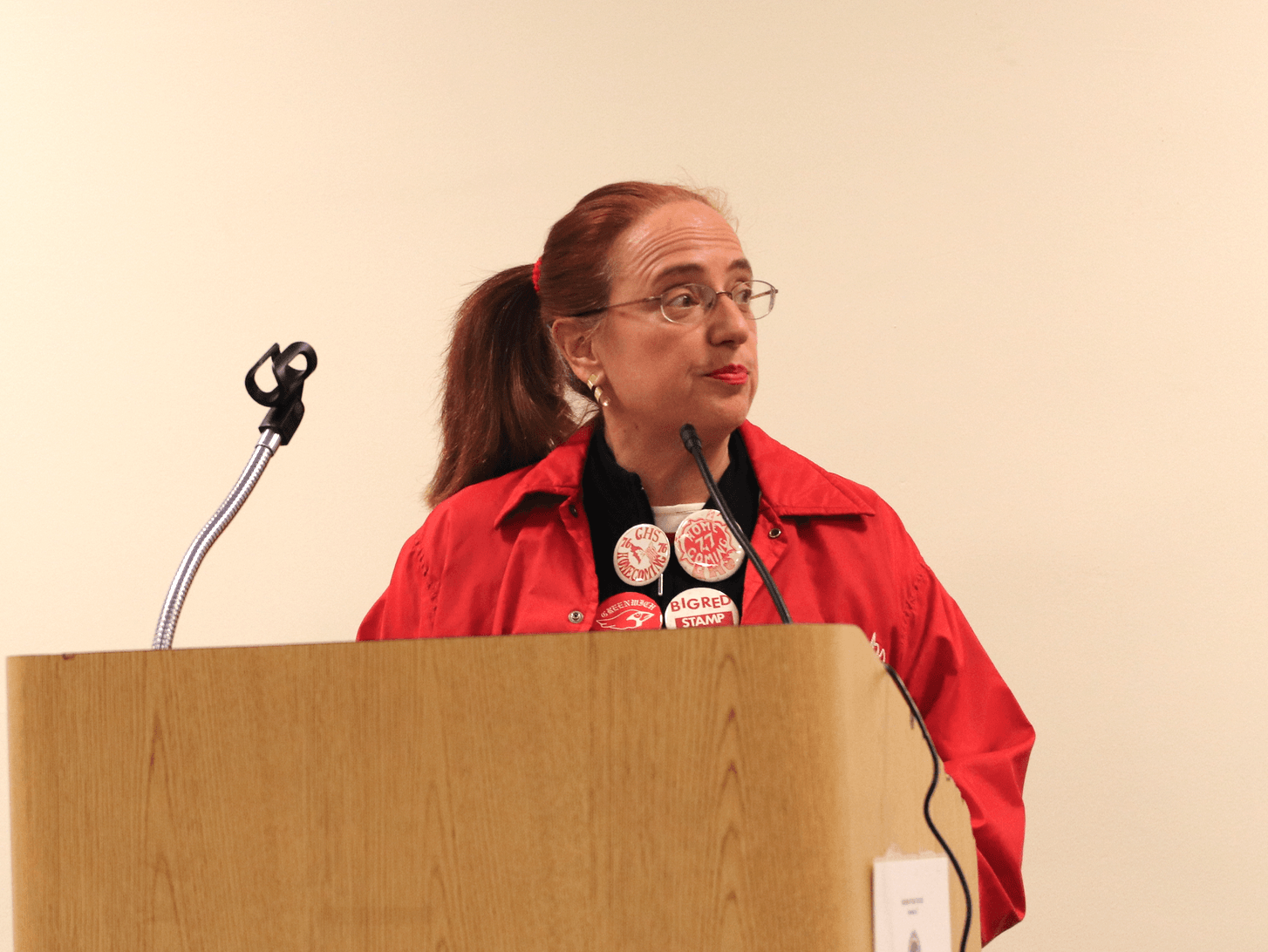 Joan Stewart Pratt, a neighbor of the GHS campus, said she supported upgrades to Cardinal Stadium, but not a secondary road that would add a traffic light on East Putnam Ave. Nov 21, 2019 Photo: Leslie Yager

Joan Stewart Pratt who graduated GHS 41 years ago, said she lives directly behind the bleachers of the football field.

“The GHS stadium should be a highlight of the town,” she said, adding that she and her husband supported Plan F.

But, she said, “We do not support talk about another traffic light between Overlook and Hillside. “There used to be three lights. This was over 20 or 30 years ago. It was removed because there was too much traffic.”

BOE chair Peter Bernstein read aloud a motion to form a feasibility and design study committee that would include: a BOE member, the district facility director, Athletic Director, GHS headmaster, a representative from the BET, the RTM, Parks & Rec, Planning & Zoning, DPW, GAF, and either the Greenwich ADA coordinator or a member of First Selectman’s Advisory Committee for People with Disabilities.

“This committee needs to finish the work,” Bernstein said. “We saw a 60% design. This is a directive to have that committee go finalize the design and bring it back to the board for a final vote.”

Bernstein said the plan has recently been referred to as “F+” because it might also include use of space under the visitor bleachers.

“In the world I come from, stuff like this is done in days and weeks,” Peter Sherr said. “How quickly could this committee complete its work and bring a proposal to this board for a vote?”

Russ Davidson of KG&D architects said, “We’re up to 8 options. There is nothing we haven’t explored. It’s pretty much how soon a committee can make a decision and how much money do you want to spend.”

“The issue was they were not funded by BET, not that they weren’t proposed,” Davidson said. “The building under the visitors bleachers has some possibilities, but there are other options.  Handicapped parking is a must. It was included in all the original phases. It just wasn’t funded in the BET phase plan.”

“We have all the baseline information for budgets. We’re happy to do this before the new year in a two or three meeting cycle,” he added.

Christina Downey suggested the committee set a cap or have a not-to-exceed dollar amount.

“What if the committee comes back with a plan that is more than we feel we can spend? If we do the second side of the stadium, visitors bleachers, we don’t know the incremental cost. We all have the $6.1 million number in our head. What if it becomes $9.1 million?” she asked.

“I just want to see the number,” Mr. Sherr said. “I think we should ask for all of this and let the BET tell us no.”

“You’re thinking about another $1 million and change to do the bleachers on the visitor side – and additional site work for a road for accessibility,” Bernstein said. “And that bridge could be a significant cost item to allow for car traffic if it’s coming from the school rather than the Post Road.”

Mr. Kelly asked how long it would take to put the committee together. Dr. Jones said she was working on it and would continue working on it the next day.

“We may want to schedule a separate public forum on the plan so we can take it up at the next meeting,” Mr. Bernstein said.

Ms. Downey asked if the cost of scaffolding rental was in the budget through construction. The answer was no.

The GAF gift included payment for scaffolding rental through December.

The motion to form the committee passed 8-0.

On Friday morning, during his final WGCH ‘Ask the Selectman’ radio program, Peter Tesei said he was a strong advocate of adding a secondary entrance to GHS via East Putnam Ave.

“I support creating another vehicular egress-access into that campus because Hillside Rd has been inundated. We have a 2 year working group that included police and neighbors trying to address those issues. Safety is paramount, and that needs to take place. It’s just too many people.”

He said there is already a drive up by the ball fields, though it is not standardized.

“I know there will be push back from the folks living in the area including Overlook, Milbrook and Mallard,” he said. “But if it can create a better flow and improve safety, everyone will be better served by that.”

“This is our flagship school. We have one high school. Any talk of relocating it is pure folly. Frankly it is in a good location,” Tesei said.