Safe Driving Day at GHS, which is a project of Health teacher Kathy Steiner’s Outreach Club, benefited from the type of perfect May weather least associated with tragic car crashes. But the mangled wreck of a red sports car in the bus circle was enough to give anyone pause.

Then there was the “Convincer,” a seconds-long “ride” that simulates a car crash at just 5 miles per hour.

Witnessing the jolt at that slow speed was also powerful. “Some kids think it’s fun. Others don’t,” said State Trooper Misenti, a member of the traffic services unit who assisted with the demonstration. “It gives a good jolt,” he said. Students had to be at least 15 and be in good health to ride the Convincer. Gabby Ferraro gave it a whirl, and though she was all smiles, she said the simulated crash was indeed convincing.

Trooper Misenti said the state owns three Convincers and they are regularly brought to colleges, fairs and high schools.

Kathy Steiner, longtime advisor to the Outreach Club said the event was successful because so many groups came together to collaborate, including GEMS, the Fire Dept., Explorer Post and Greenwich Police. “To have them give up their time for this event and collaborate with us is great,” she said. “We are so grateful. Car crashes are the number one killer of teenagers.” 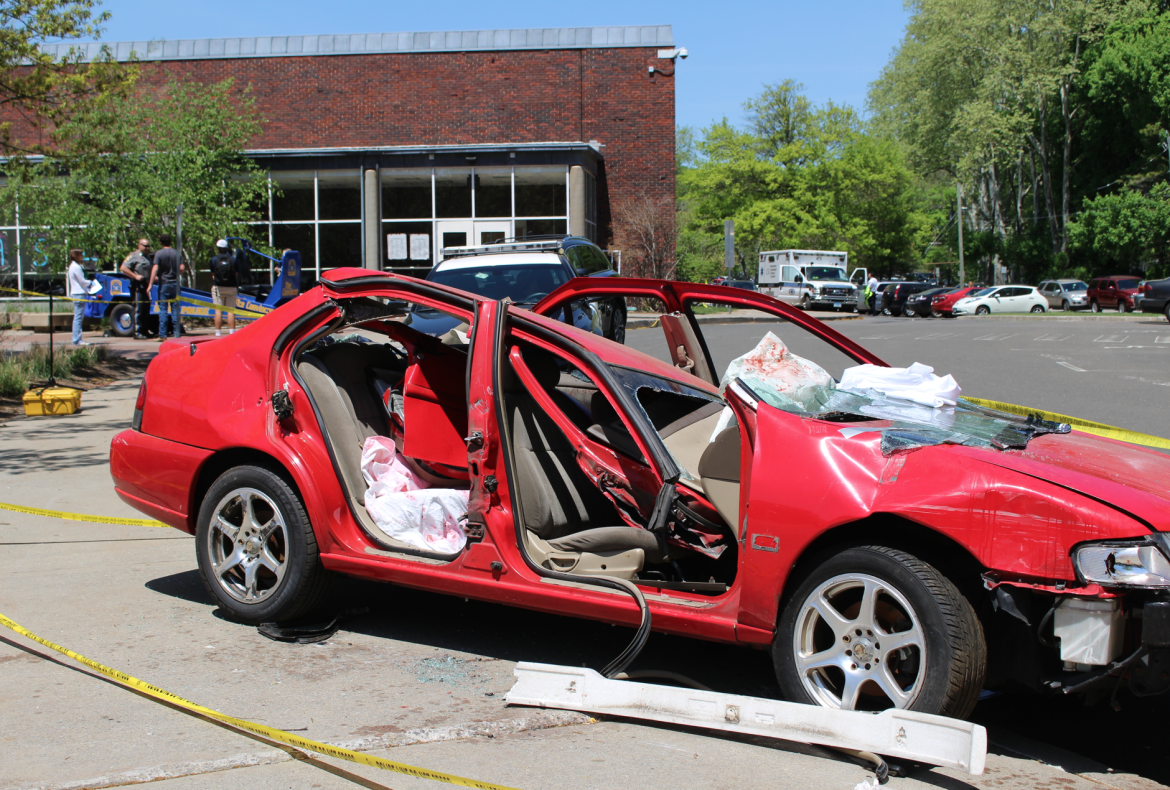 The overall message of Safe Driving Day was that drinking and driving kills, as does distracted driving. GHS grad Ben Albano, who returned from his freshman year at UNC Chapel Hill set up a table and spoke about Project Yellow Light, a non-profit he is passionate about. Ben established the Project Yellow Light fundraiser at Grand Prix in Mt. Kisco a few years ago. This year his brother Addison, a senior at Brunswick ran the event, which uses go-kart racing and the incredible concentration it requires to drive home the point that distracted driving is a killer. 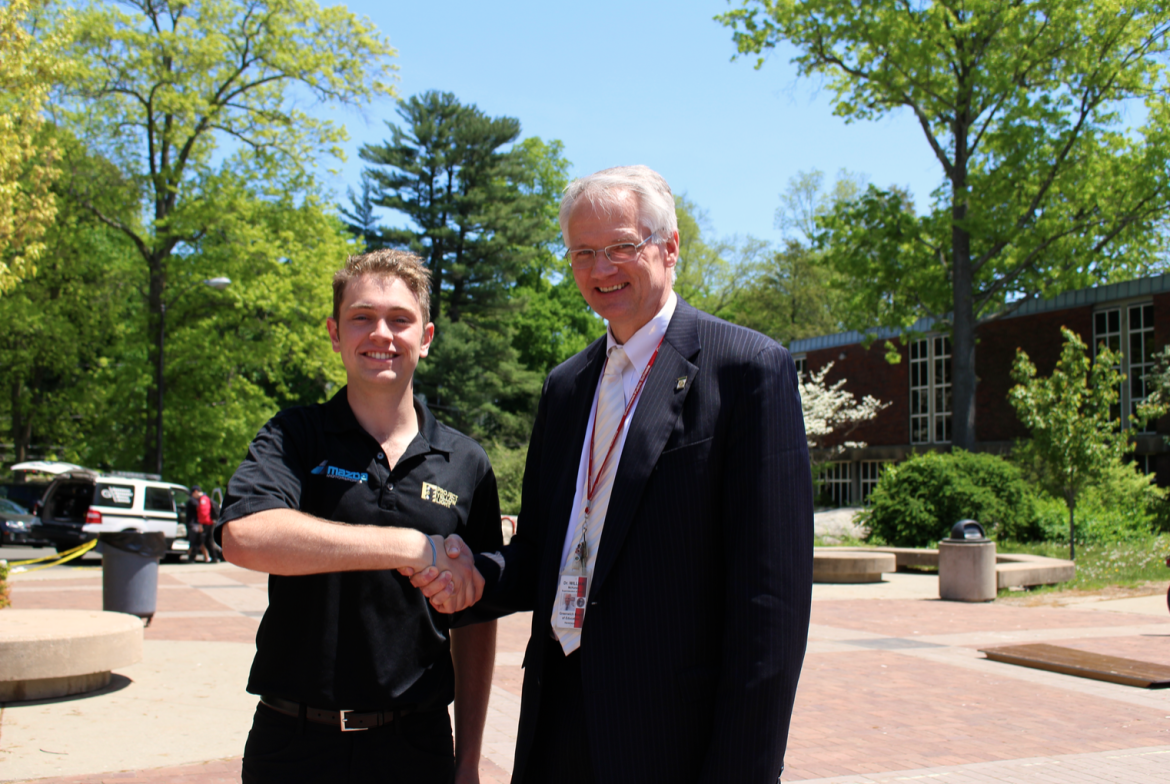 Ezequiel Konecny a sophomore who is a GEMS volunteer said the reaction to his being made up to look like the victim of a serious car crash was mixed. “Some people were intrigued,” he said. Others were scared. Some mentioned, ‘I don’t want that to be me,'” he said. 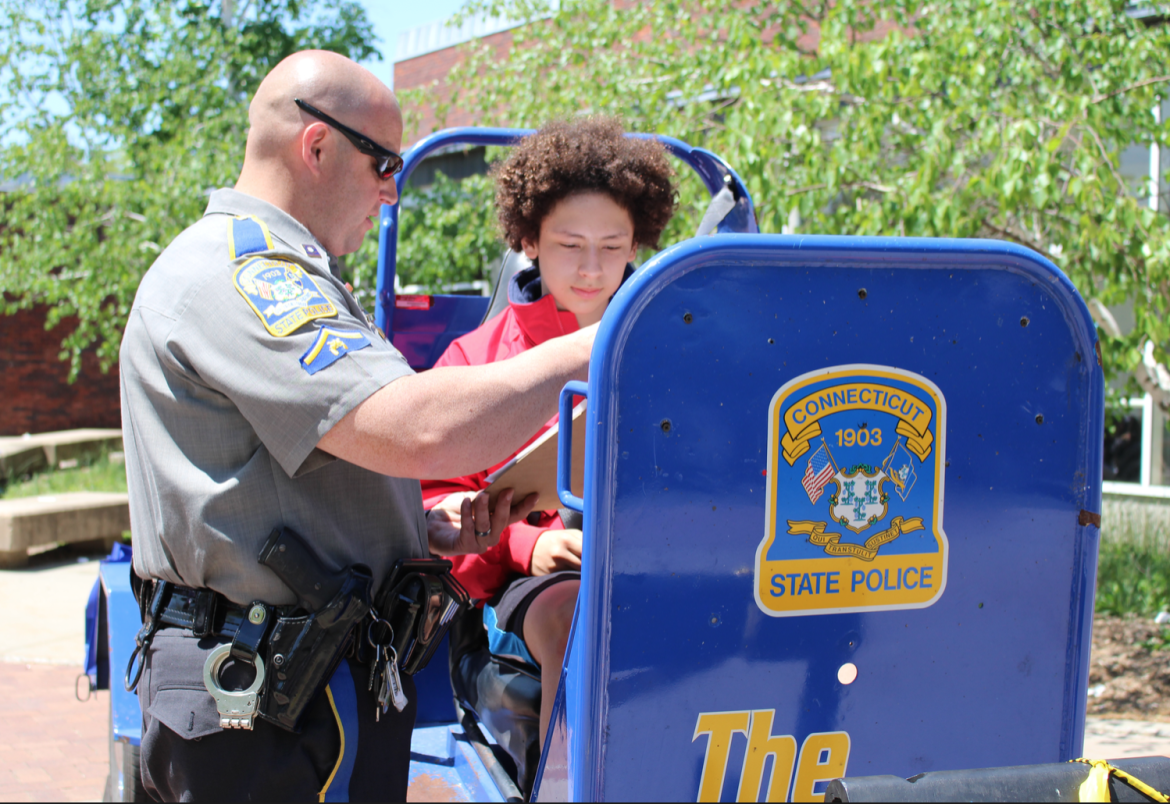 Jacobo Romero anticipates his 5MPH crash on the Convincer at Safe Driving Day at GHS on Thursday. Credit: Leslie Yager 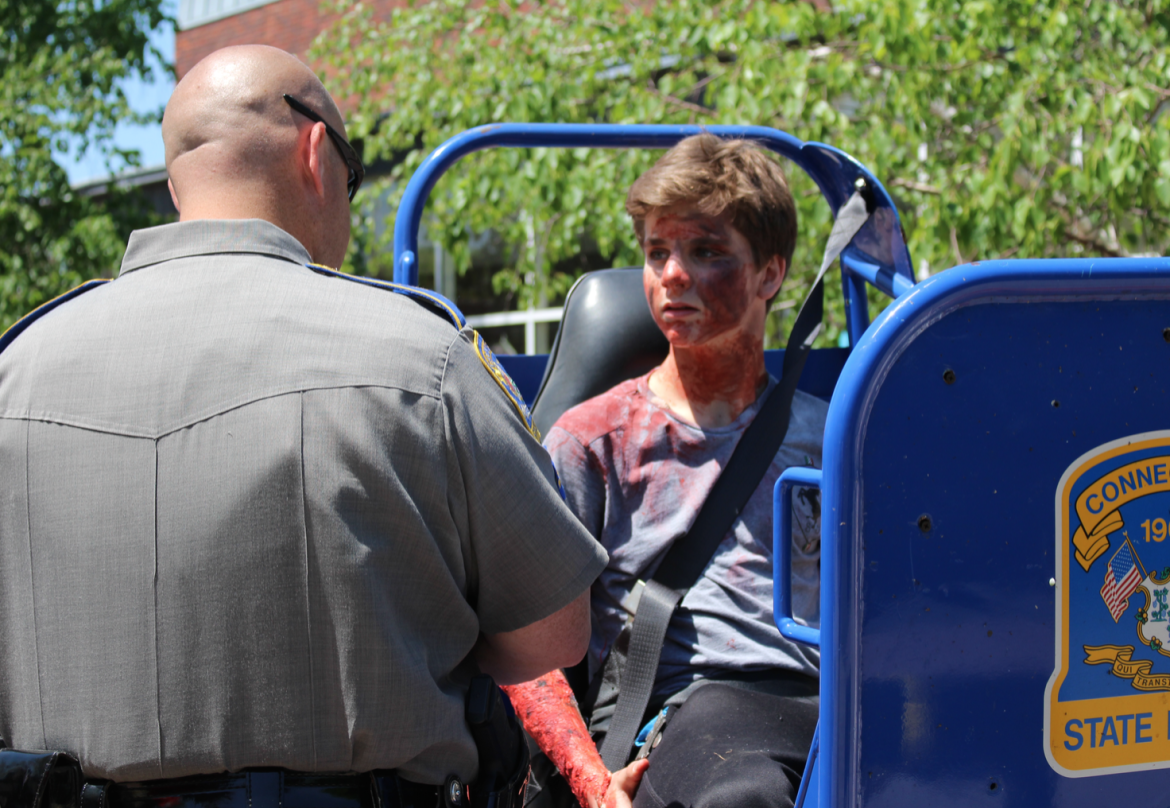 At at Safe Driving Day at GHS, Ezequiel Konecny a sophomore who is a GEMS volunteer anticipates his 5MPH crash on the Convincer. Ezequiel was made up with “blood and gore” as if he were a crash victim. Credit: Leslie Yager 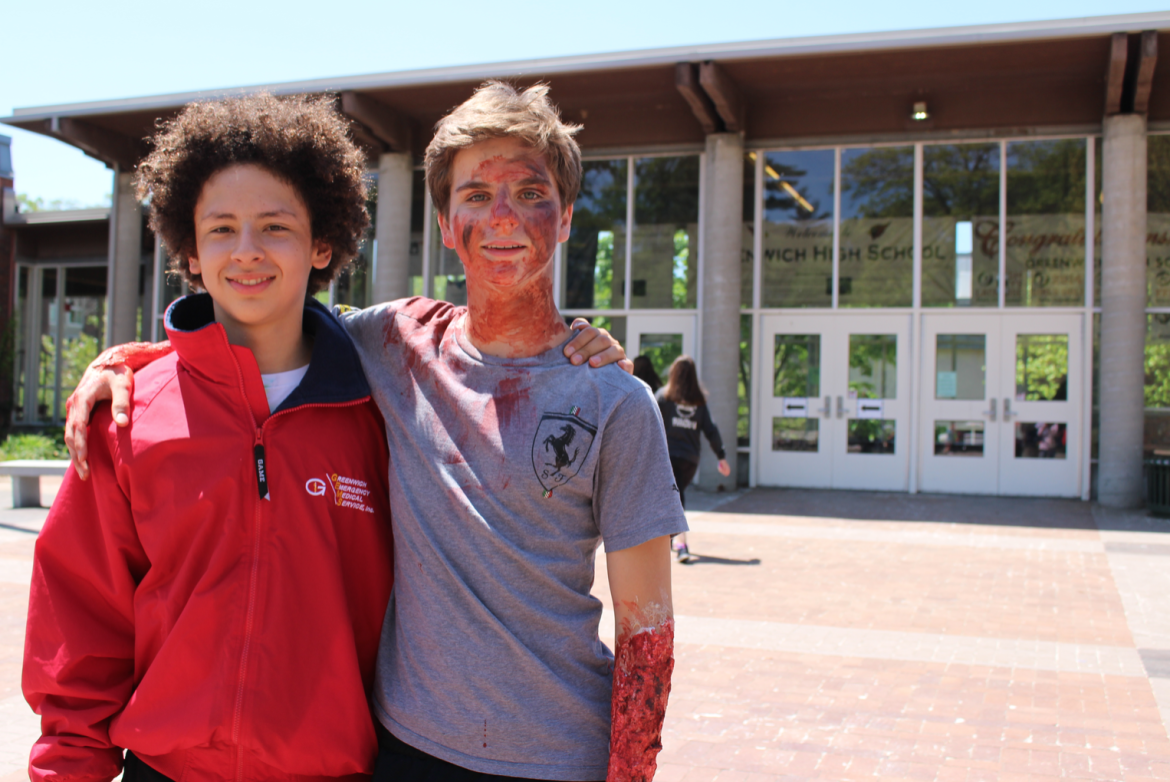 Ezequiel Konecny and Jacobo Romerez at Safe Driving Day. It was a beautiful, warm sunny day in May — the type of day one doesn’t ordinarily associate with a drunk driving or distracted driving crash. Credit: Leslie Yager 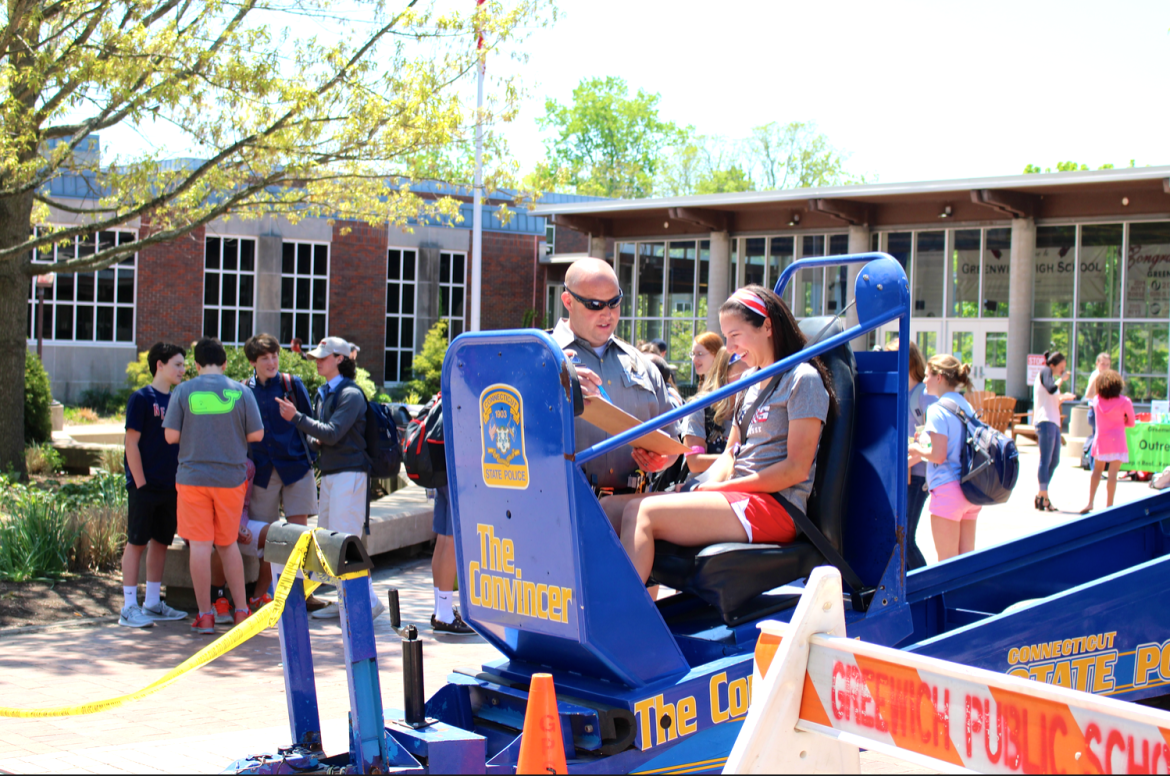 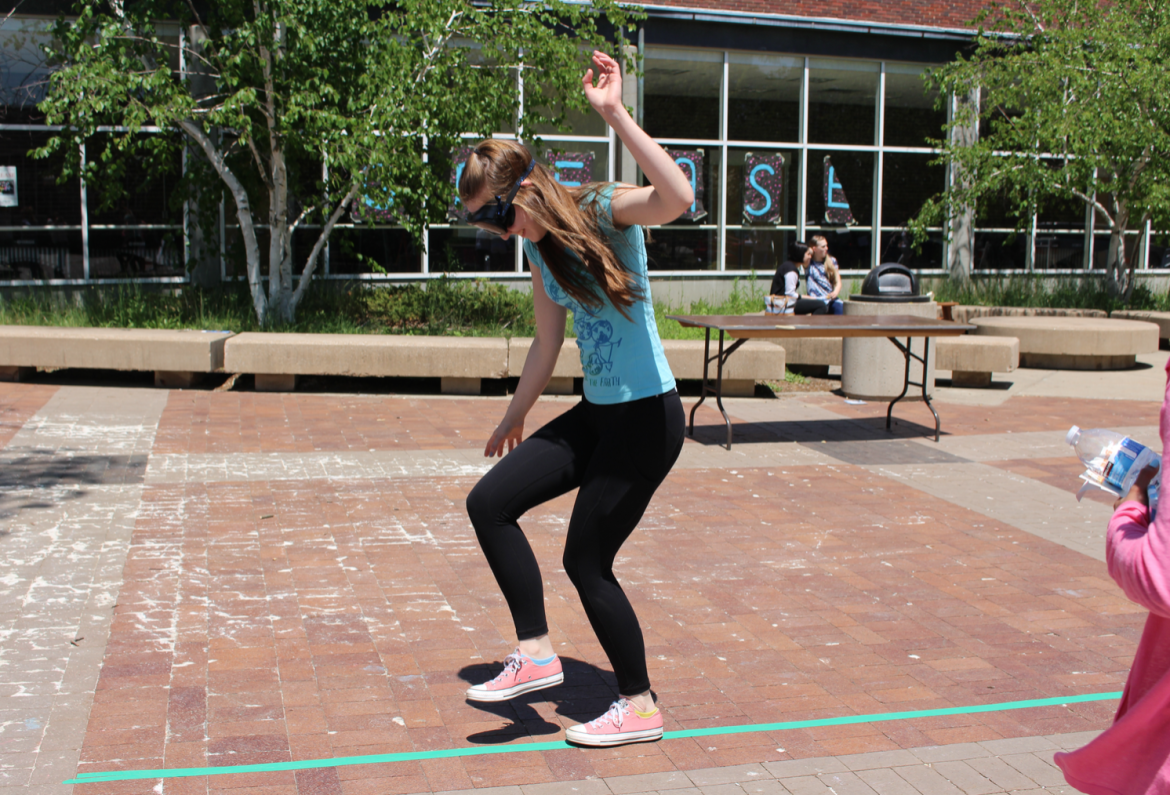 Charlotte Hacker demonstrated how abilities are impaired by strapping on “the beer goggles” during GHS Safe Driving Day on Thursday, May 14, 2015. Credit: Leslie Yager

The Outreach Club members let students try on the “beer goggles” that simulate impaired ability before considering getting behind the wheel.

Demonstrating the effect was Charlotte Hacker, who had difficulty walking a straight line.

The overall goal of Outreach Club is to decrease underage drinking within the Greenwich community. 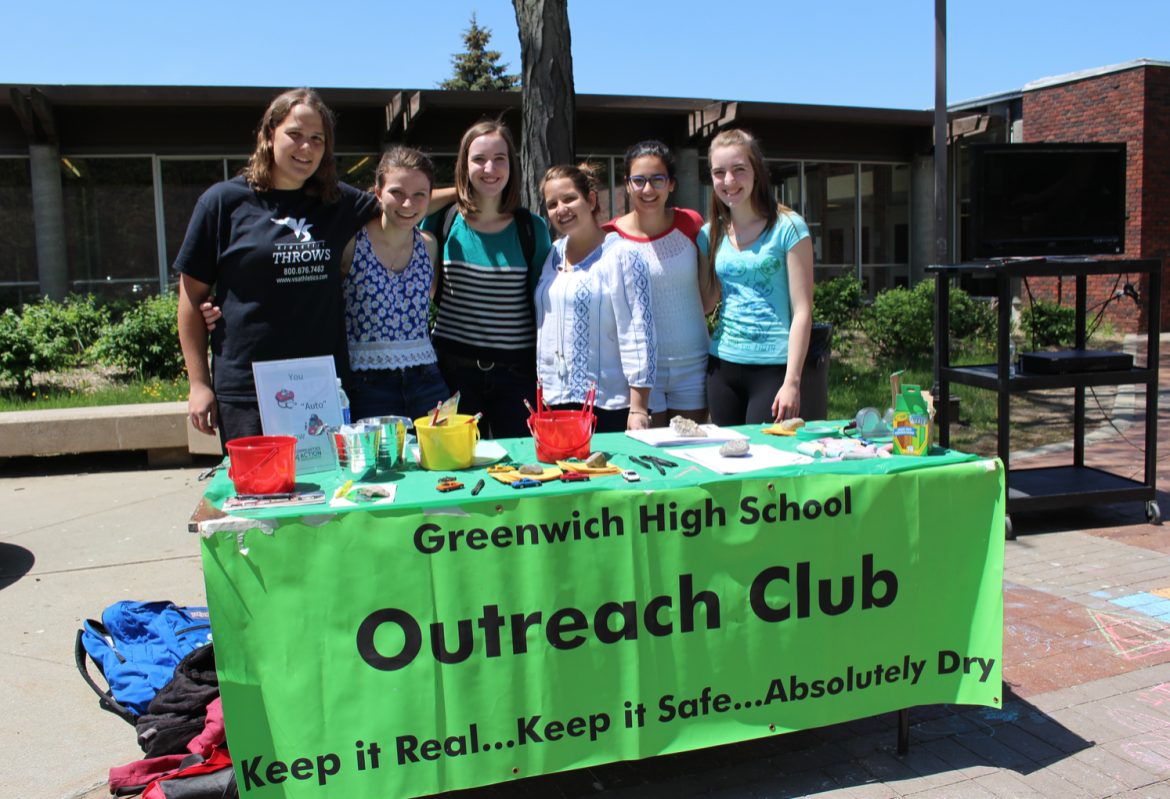 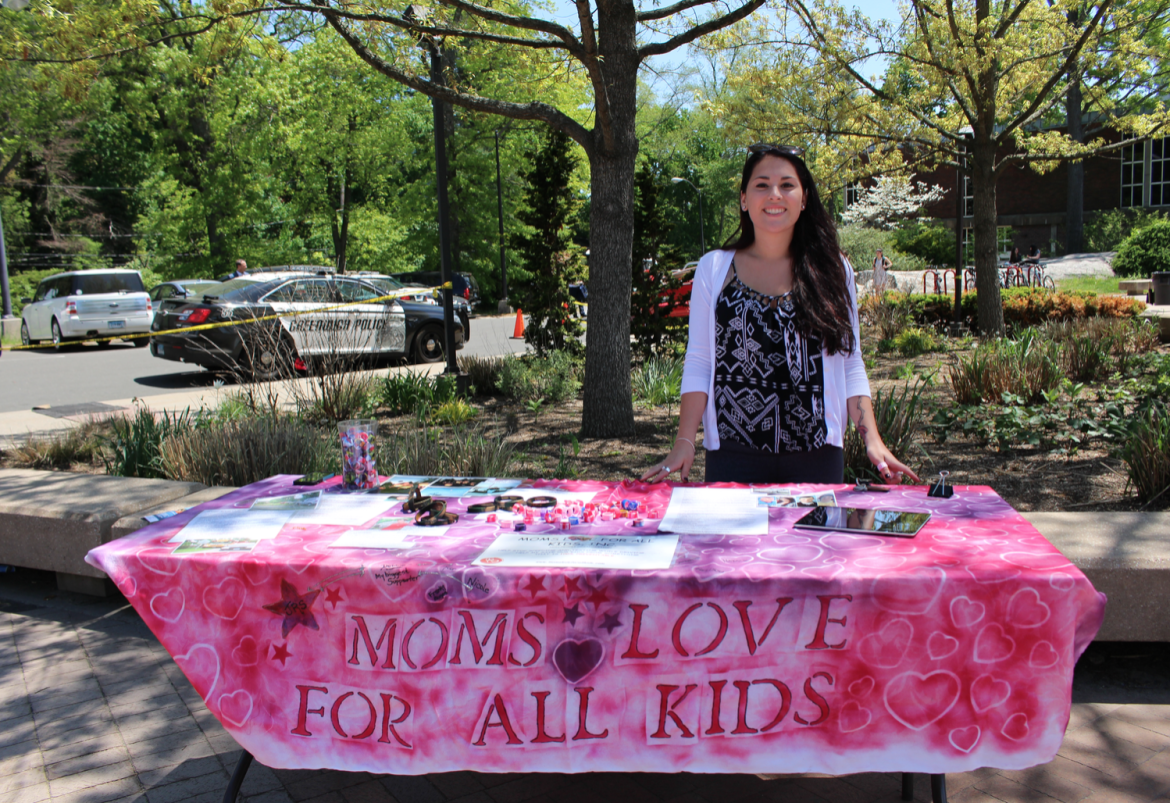 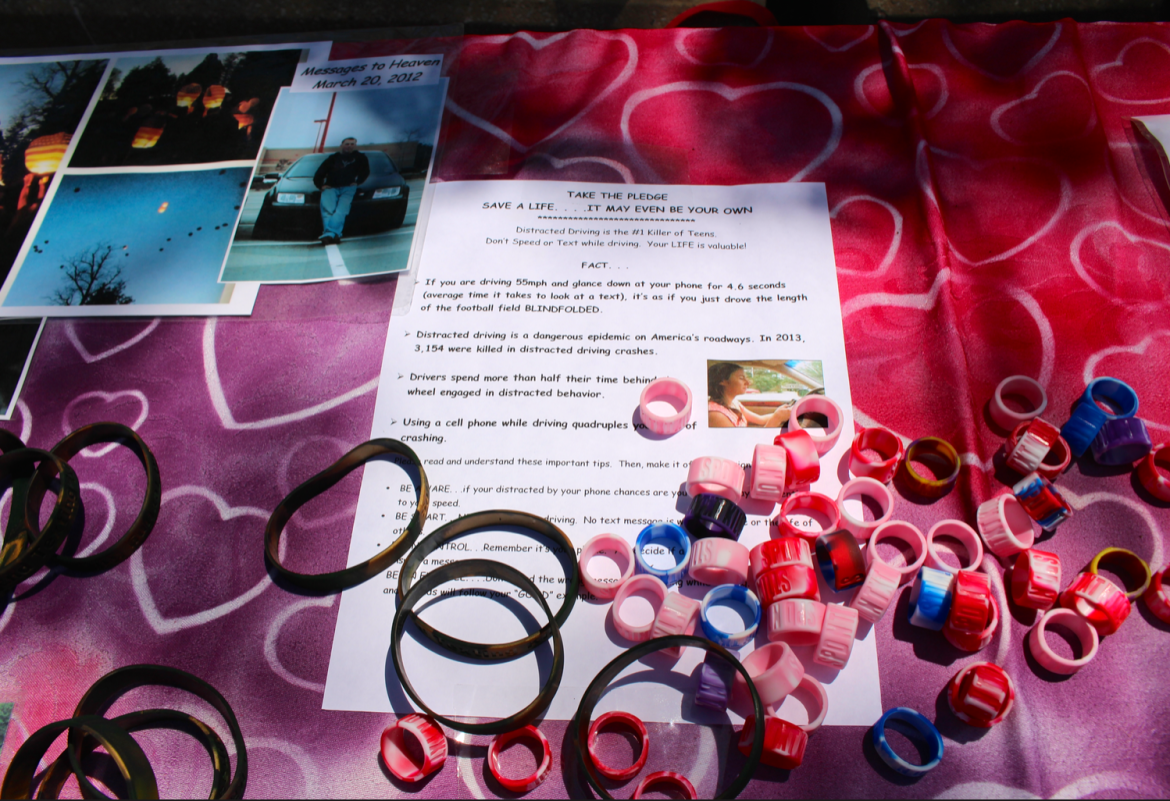 Natalie Heerman of Moms Love for All Kids, LLC, an organization started by her mother, Joann, said that in Greenwich, in one year from may 2014 to April 2015, 970 tickets were written for cell phone use, texting, and distracted driving. A reminder from Moms Love for All Kids that distracted driving is any activity that could divert a person’s attention away fromt he primary task of driving. All distractions endanger the driver, passenger and bystander safety, including texting, using a cell phone or smartphone, eating, drinking, talking to passengers, grooming, dreading, including maps, using a navigation system, watching a video or adjusting a radio, CD player or MP3 player. Find them on Facebook at Moms Love for All Kids, LLC.