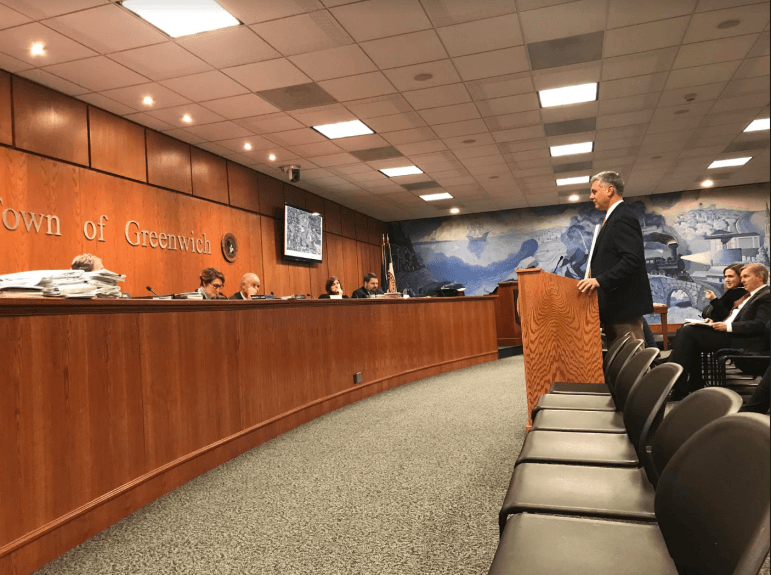 By: greenwichfreepress | 1 hour ago

They said they’d prefer GCDS migrate their athletic fields to the school’s Stanwich campus, which is further from the congested GHS/CMS corridor.

They also suggested borrowing locker rooms and toilet facilities from the Greenwich Skating Club in the interim.

RTM District 8 (Cos Cob) Has a Vacancy

The district will fill this position at their next meeting scheduled for Wednesday, March 4, beginning at 8:00pm in Cos Cob School’s Media Lab.

The 72.27 acres of land is considered surplus and is no longer needed by Aquarion in order to provide water service.

ARORA: Tolls Are a Bad Policy with No Popular Support

I-95 at Exit 4 (Indian Field Road/Cos Cob) southbound exit ramp in Greenwich will be closed for a week during work. Traffic will be rerouted to Exit 3 (Arch Street). Continue Reading →

A new, voluntary, drop off food scrap recycling program is the result of efforts by GRAB and Waste Free Greenwich working with the Dept of Public Works and Conservation Commission for the pilot starting in April. Continue Reading →

On Wednesday, January 29, at 7:00 pm The Children’s School will host Deborah Roffman for a parenting workshop on talkign to children about Sexuality. This frank workshop will give you the tools needed to tackle the subject of sex with your children. Continue Reading →

“Pam had been living at Greenwich Woods for about eleven months when she suffered a major and un-survivable stroke. Her time spent there was undoubtedly the best in many decades of her life.” Dr. Stephanie Paulmeno Continue Reading →

With water views like no other home in Cos Cob, this meticulously maintained imperial home is from a fairytale with its curved turret staircases, arches and rounded features. Continue Reading →

The US Attorney’s Office is charged with enforcing federal criminal laws in Connecticut and representing the federal government in civil litigation. The Office is composed of approximately 68 Assistant US Attorneys and approximately 54 staff members at offices in New Haven, Hartford and Bridgeport. Continue Reading →

A man was charged with Breach of Peace 2, Interfering with an Officer/Resisting Arrest, Criminal Trespass 1, and Illegal Possession. Continue Reading →

Following an investigation into a crash on West Putnam Ave in April 2019, a Greenwich man subsequently failed to appear in court and a warrant was issued. Continue Reading →