Joe Dowling just wants to be able to to make it to the bathroom.

“Imagine putting a beautiful structure like this on the top of Mount Fuji,” he said to describe the pathway he had to take to get to the proposed spot of relocation for a bathroom at Greenwich Point.

Dowling is a Greenwich resident who contracted polio at 13 years old and has been in a wheelchair for nearly forty years. 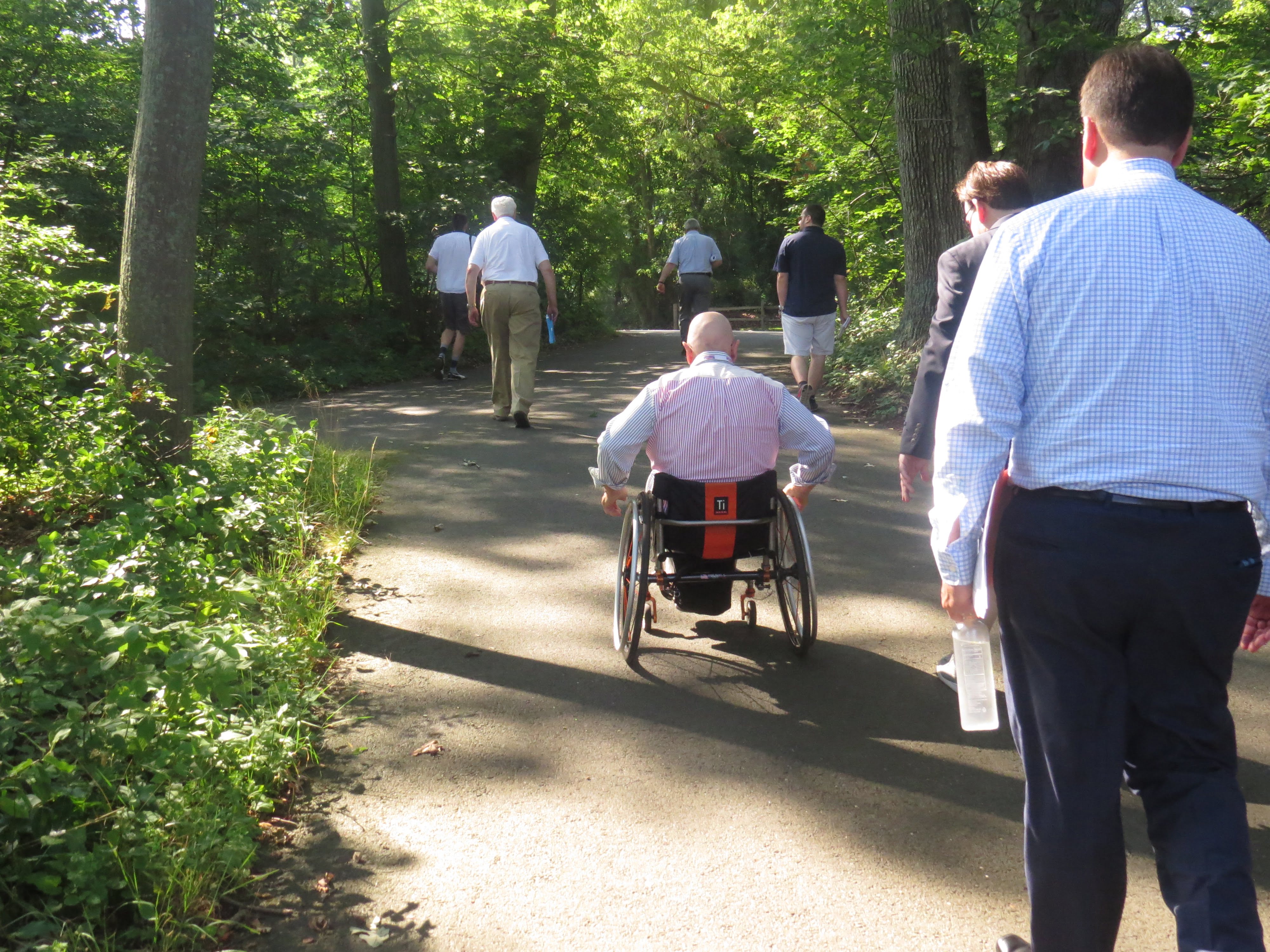 Joe Dowling uses one of the roadways by the Chimes building that does not meet ADA regulations. July 19, 2017. Photo: Devon Bedoya

On Wednesday, Board of Selectmen met with the Town’s Building Superintendent Alan Monelli and Parks and Recreation Director Joe Siciliano at Greenwich Point to further discuss an issue regarding a solution for providing bathrooms in the Chimes building. 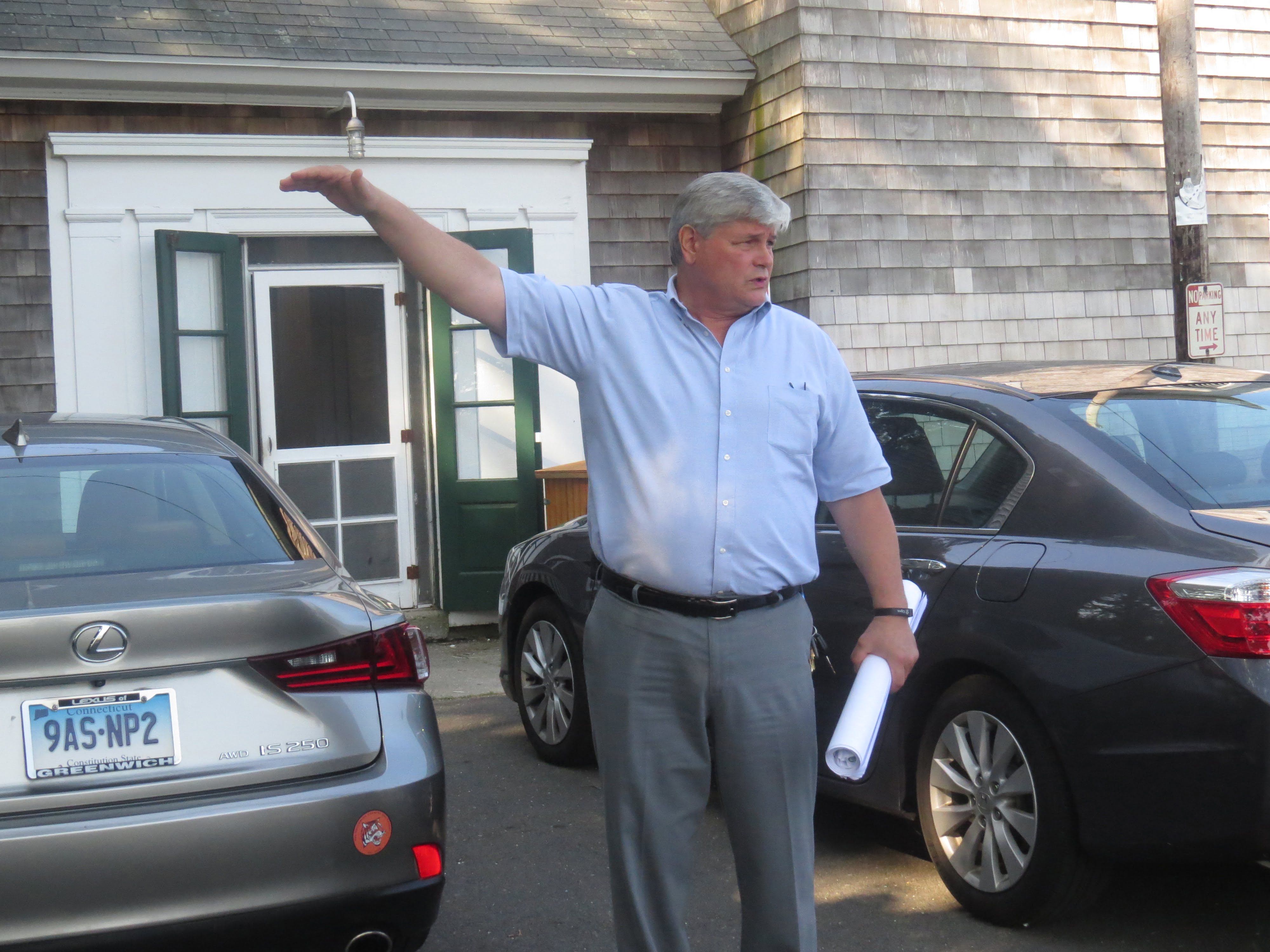 The building’s only bathroom does not meet Americans with Disabilities Act regulations.

The building also sits in a flood zone, according to Federal Emergency Management Agency regulations.

With the Greenwich Point Conservancy looking to renovate the Chimes building, this bathroom is a particular point of conflict.

This is because the GPC wants to use a historical waiver to restore the building, since the building has presided at the edge of Greenwich Point since 1947.

“At some point, the Greenwich Point Conservancy wants to restore this building. One of the issues with restoring a building is that you have to have a function so that you can restore it to a building code. By removing the bathroom, that would allow the Conservancy to restore in any way that they want,” said Monelli.

Monelli also said that during Hurricane Sandy, the Chimes building was badly damaged. Since it sits in a flood zone, any renovation would mean the building would face inevitable damage due to weather. The the building also sits close to the roadway, and had to be restored after a car crashed into its side.

To solve the issue, GPC has proposed to relocate the bathroom up the bluff behind the Chimes building. 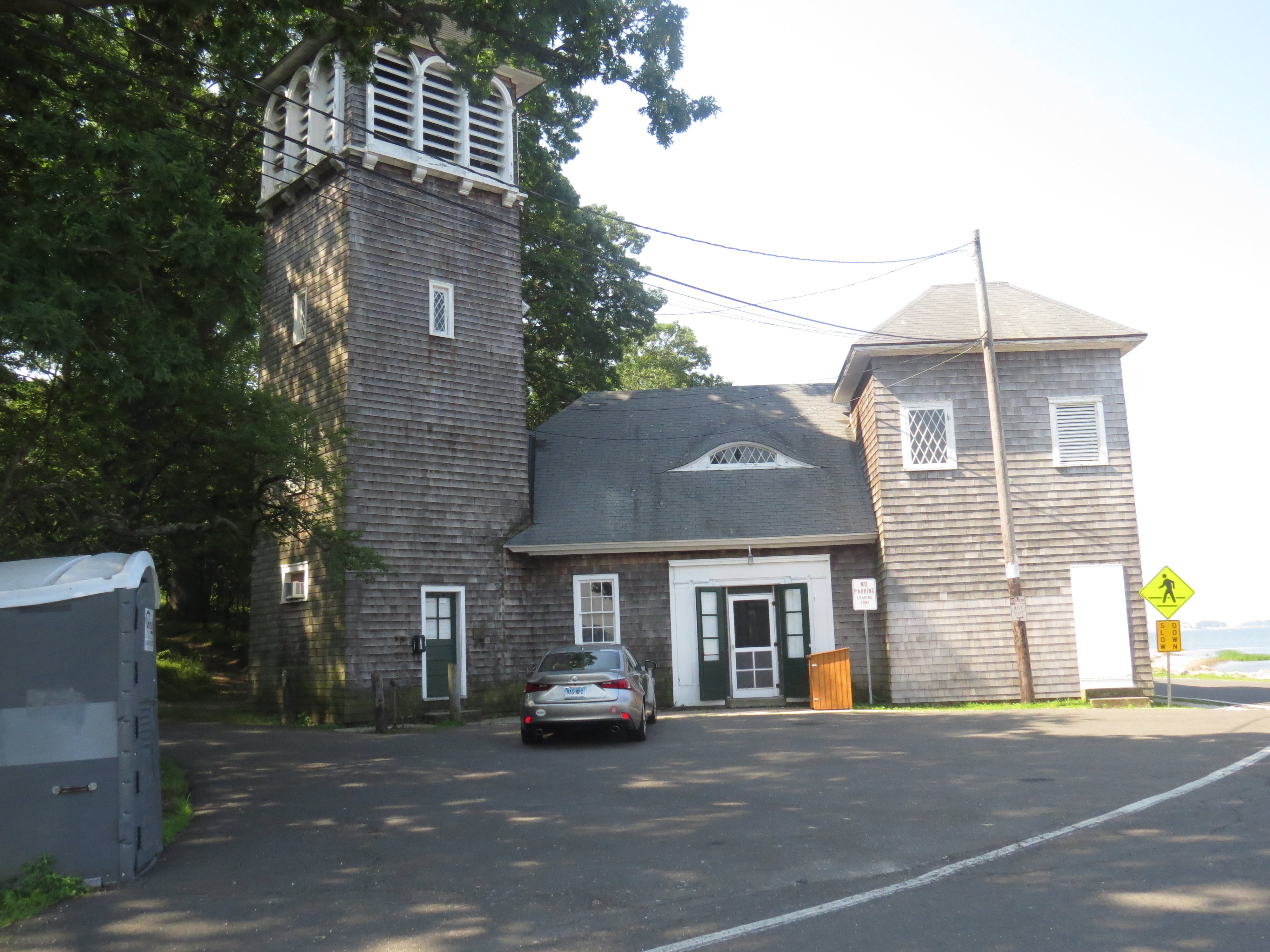 The Chimes building at Greenwich Point is used heavily by boaters and members of the Old Greenwich Yacht Club. July 19, 2017. Photo: Devon Bedoya 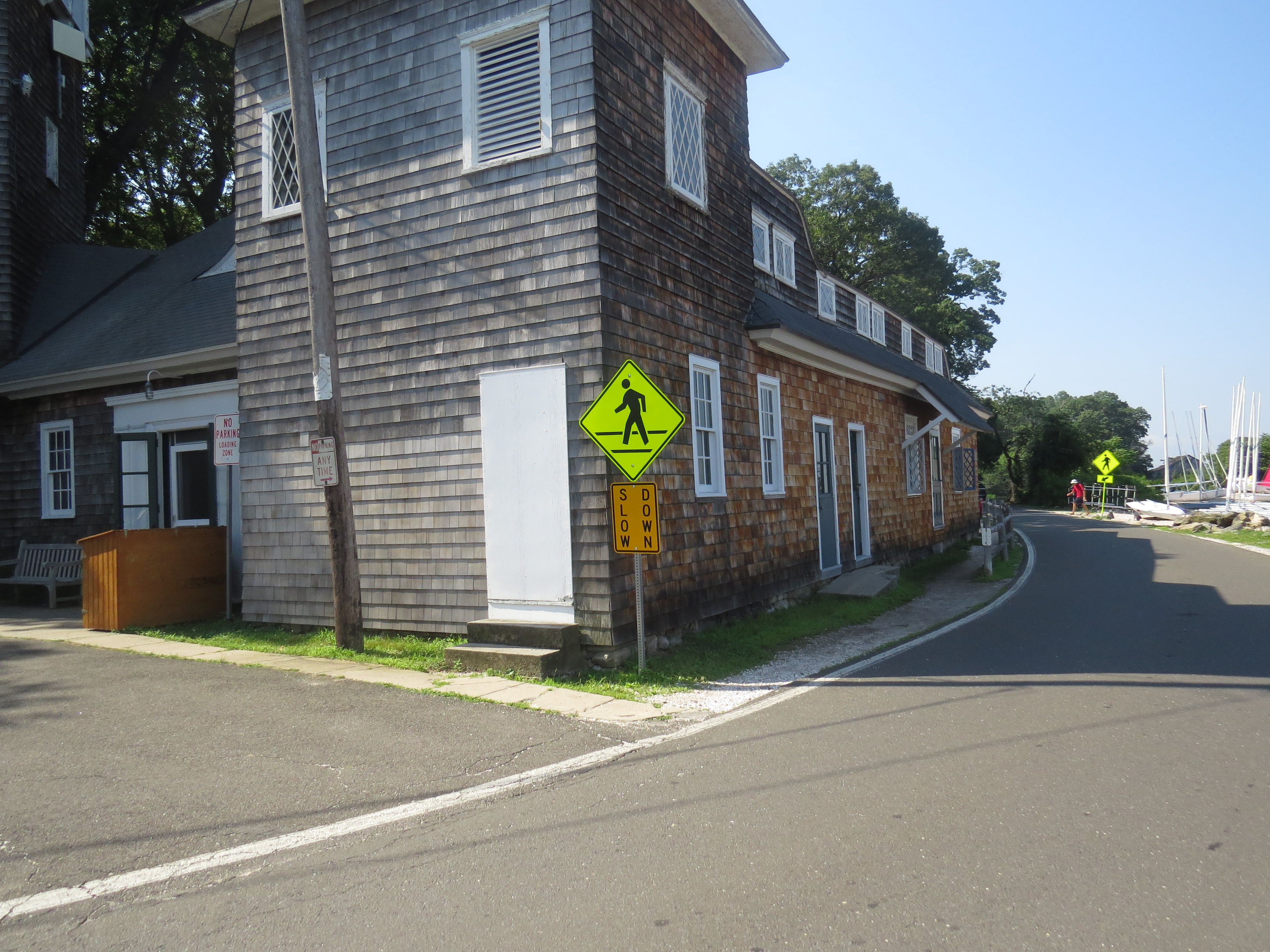 The Chimes building has faced damage due to Hurricane Sandy, which tore off the siding of the building. July 19, 2017. Photo: Devon Bedoya

At Wednesday’s meeting the Board of Selectman toured the grounds at Greenwich Point by the Chimes building and the Old Greenwich Yacht Club where new restrooms are proposed.

The proposed relocation is out of the flood zone and meets FEMA regulations. The septic field would be moved to the nearby clearing to meet regulation as well. The new structure would also meet ADA regulations.

“My only concern is the location, not the bathroom itself,” said Alan Gunzburg. Gunzgurg is on the First Selectman’s Advisory Committee for People with Disabilities in Greenwich and is legally blind. 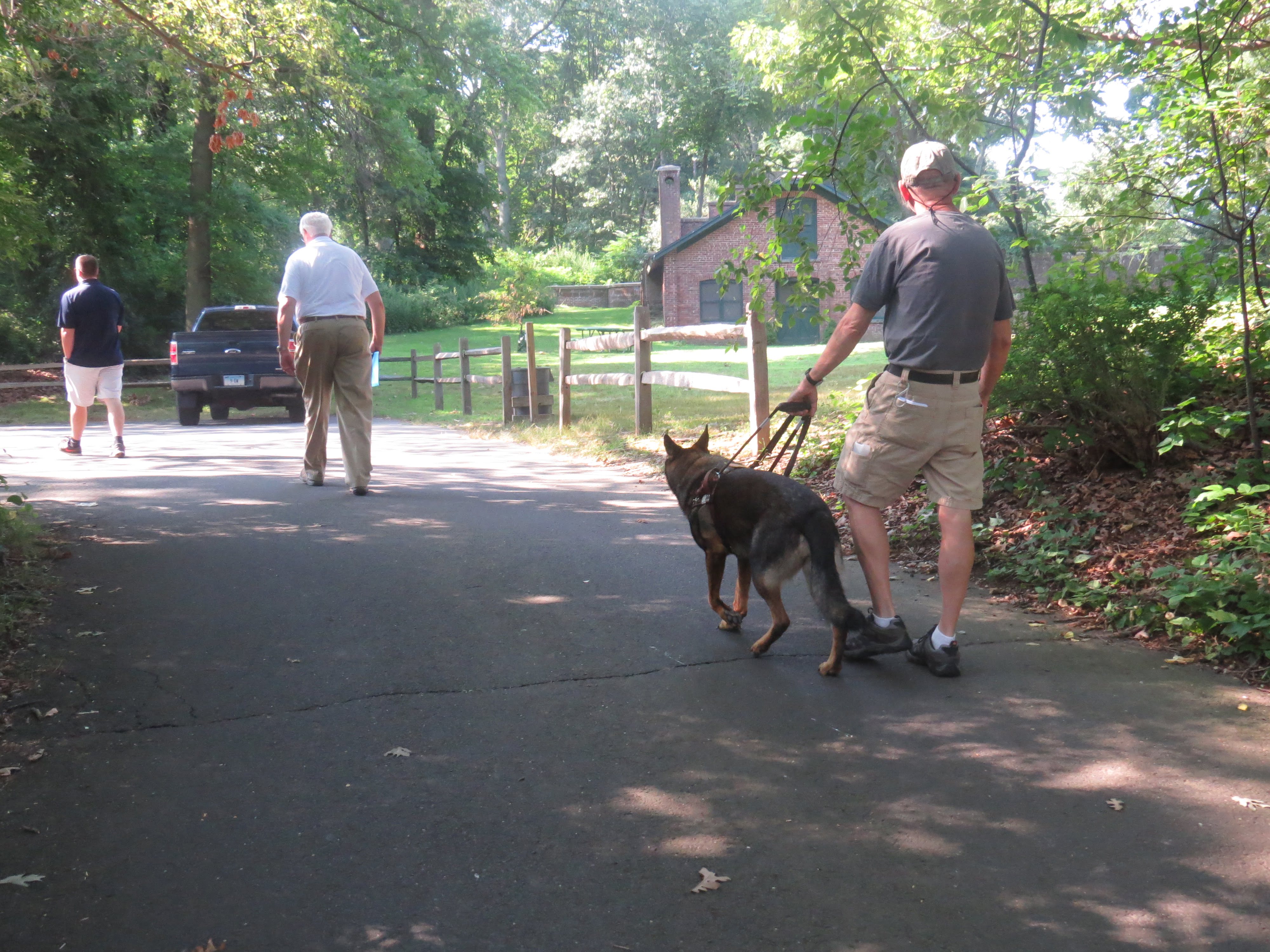 Alan Gunzburg walks with his seeing eye dog, Kili, to the site of the proposed bathroom. July 19, 2017. Photo: Devon Bedoya

The proposed location requires potential bathroom users to travel up one of three currently existing steep roadways. Monelli said that two of the roadways are not within ADA regulations due to level of incline.

“I had the town engineer come out to assess the possibilities, and we found that the far road is less than a one-foot rise, which meets ADA requirements,” said Monelli.

To be compliant, the level of incline has to be between one inch and twelve inches. The third existing roadway, which Monelli referred to as the “far road,” does meet this standard. 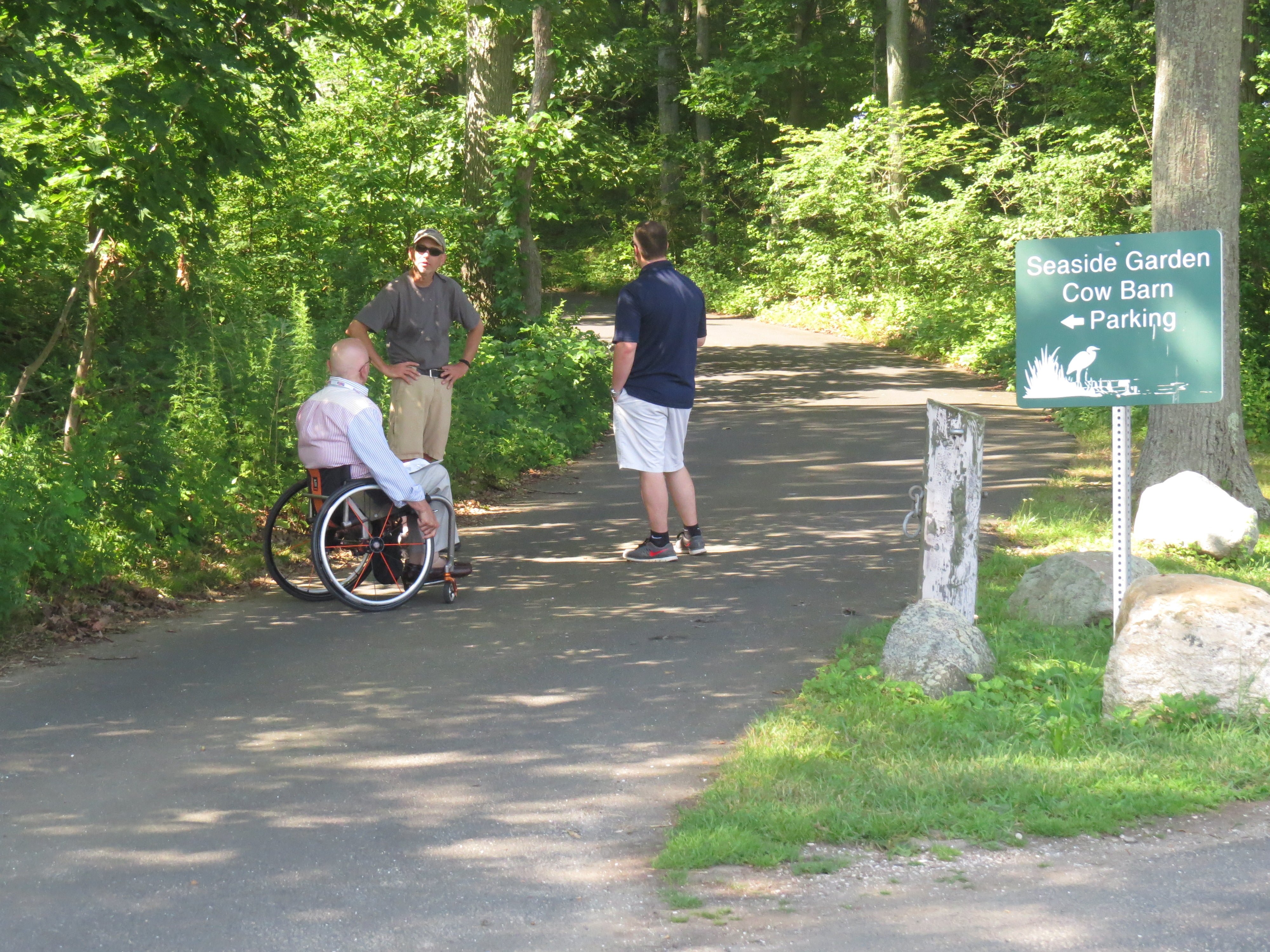 Joe Dowling and Alan Gunzburg agree that this roadway should become a footpath in order for the new bathroom to be accessible. July 19, 2017. Photo: Devon Bedoya

Both Gunzburg and Dowling said that to make the proposed location compliant, this third roadway would ideally become a walkway for pedestrians, and Selectman Drew Marzullo agreed.

“It not the ideal location,” Marzullo said. “I’m concerned because of accessibility. But if not here, then where?”

According to Monelli, there isn’t much of a choice. At the last Board of Selectmen meeting, there was discussion of the possibility of a scissors ramp or a Porta-John. Ultimately, Monelli said the best bet for making the location of the proposed bathroom ADA compliant was the third existing pathway.

“This is close to being a home run,” he said.

Although Dowling made it up the roadway himself, he said he still had some concerns.

“If it’s ADA compliant, it’s accessible. But it’s not necessarily usable… What we really need to look at is accessibility versus usability. Can it be used without danger?” said Dowling.

He said for him, almost nothing is difficult since he has maintained his strength through constant training. He said being in a wheelchair for so long has helped him to not only see elevation change, but also feel the slightest change.

“I definitely think it would be a problem for people newly recovering from surgeries, people in walkers and elderly people,” said Dowling. 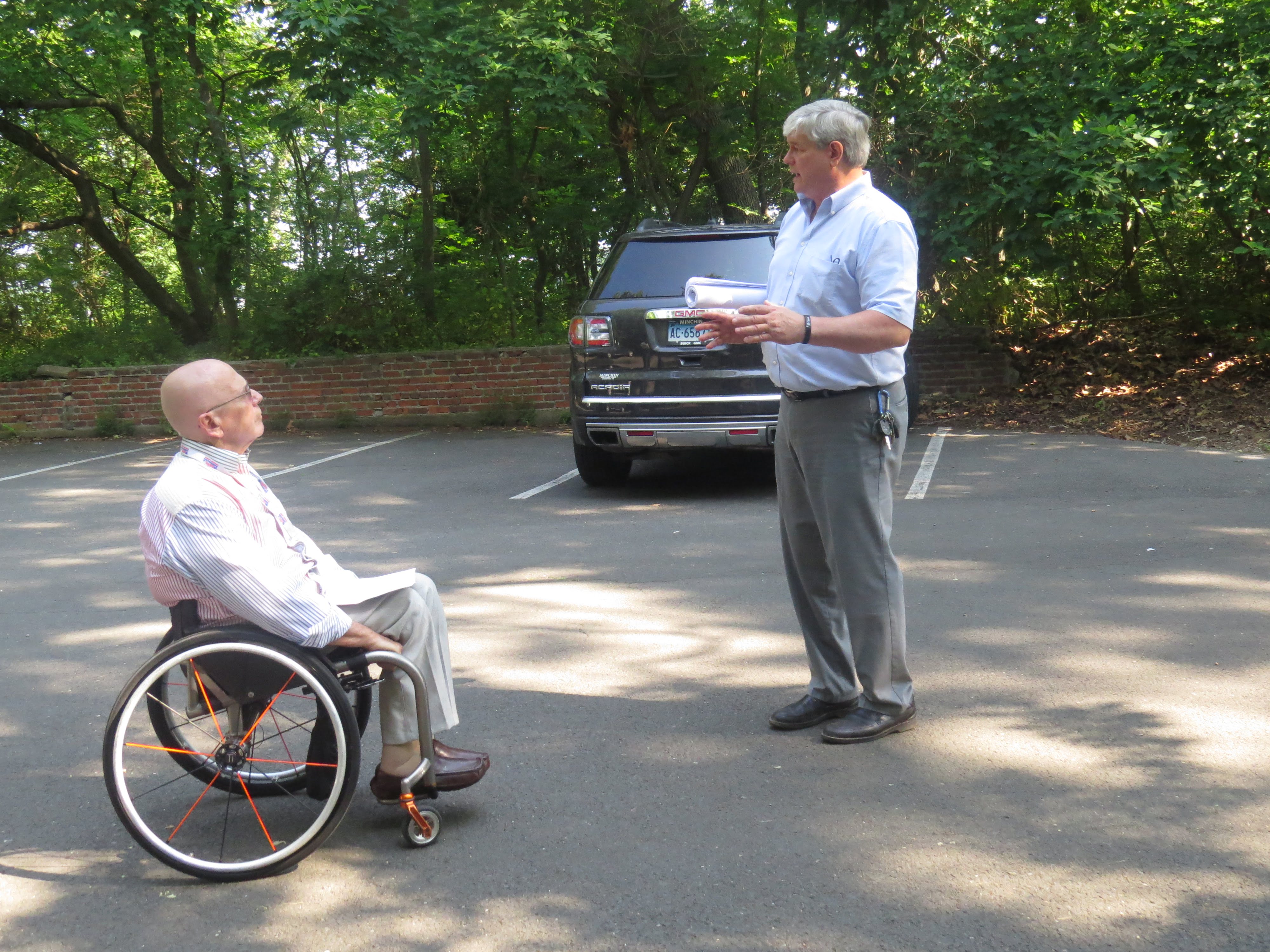 Gunzburg agreed that the incline might be too much for some people.

“To build a $600,000 bathroom that not every resident in the town of Greenwich could take part in doesn’t make any sense” Gunzberg said. “I could walk up the bluff no issue, but could my mother who just had a knee operation? Could someone with a hip problem? Could somebody in a wheelchair? How about a mother with a double stroller? Of course it’s about the disabled, but it’s really about everybody.”

“I think it’s very important that the ADA issue is raised,” said Selectman John Toner. “It’s important to be ADA accessible. Nothing is ever perfect, but this is a good option,” he said about the idea of the third roadway becoming a footpath. 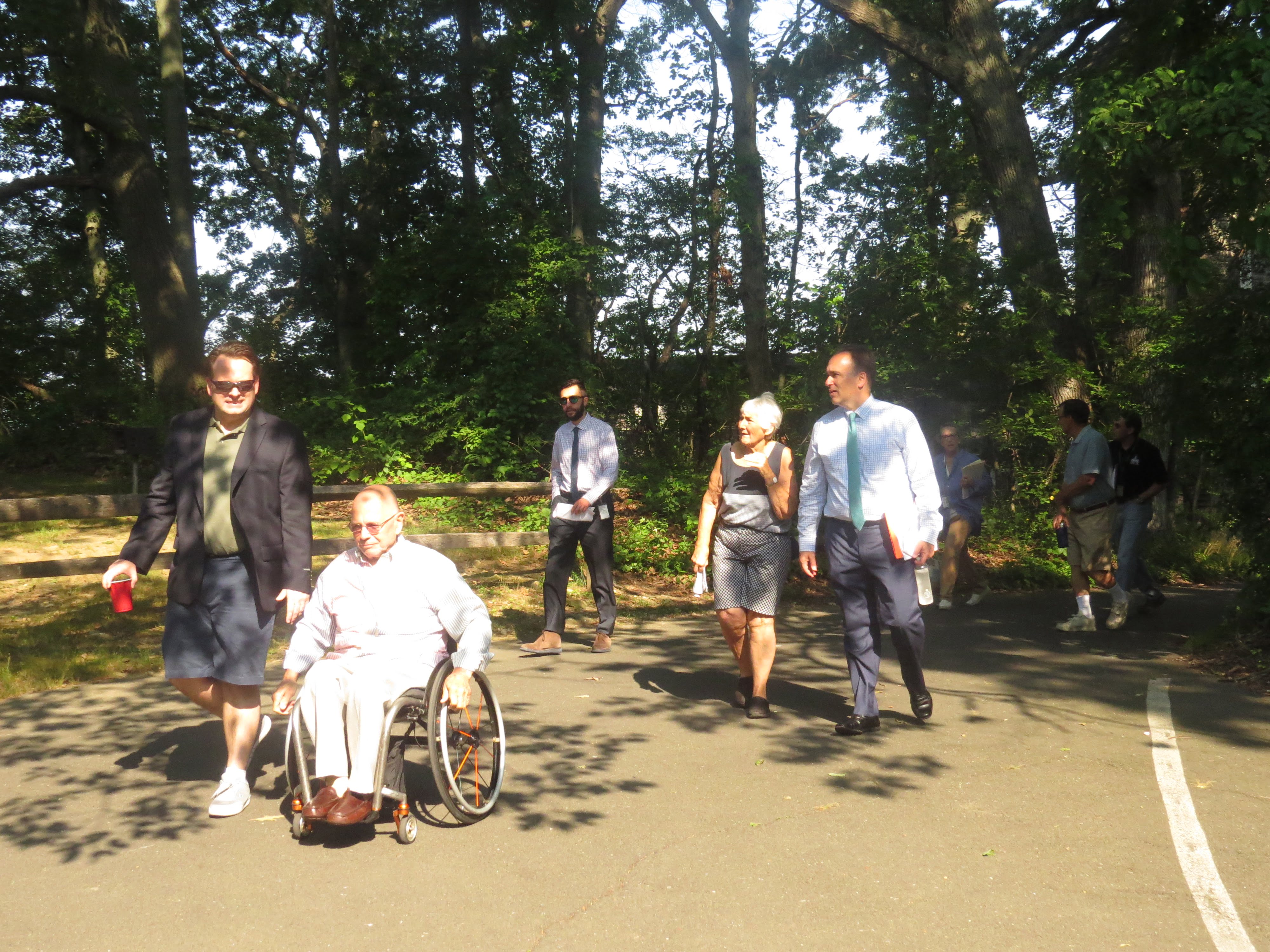 People at the meeting move up to the bluff behind the Chimes building to discuss the location of the new bathroom. July 19, 2017. Photo: Devon Bedoya

First Selectman Peter Tesei ended the meeting by reminding everyone that the purpose of touring the Greenwich Point grounds was to gain a better understanding of what was being proposed. He said it would help the selectmen make a referral to Planning and Zoning, who will then handle the various details and regulations that pertain to this proposal.

The selectmen will vote on the referral at their July 27 meeting.