At the most recent Board of Selectmen meeting, George Yankowich, Housing Authority Commissioner and Chris Bristol, the attorney hired by the Housing Authority fielded questions on the proposed overhaul of Armstrong Court.

“That’s where my family’s roots are from, Chickahominy – on both sides,” Tesei said of the Armstrong Court neighborhood, adding that he understood objections of neighbors to the construction on Booth Place of a 51-unit apartment building for seniors.

The State has designated Armstrong Court as “at risk,” given its age and construction, and Tesei said the community has unanimously embraced the redevelopment of the complex, including the addition of new units along Hamilton Ave.

However, the First Selectman said, “There’s consensus this project can go forward exclusive of the senior residence on Booth Place.”

Still the Selectmen had many questions for Yankowich and Bristol, including how the project would achieve the satisfactory number of additional units to qualify for State funding, given the math:

The  number of units in existing buildings will be reduced to 132 from 144 in order to create “family units.” 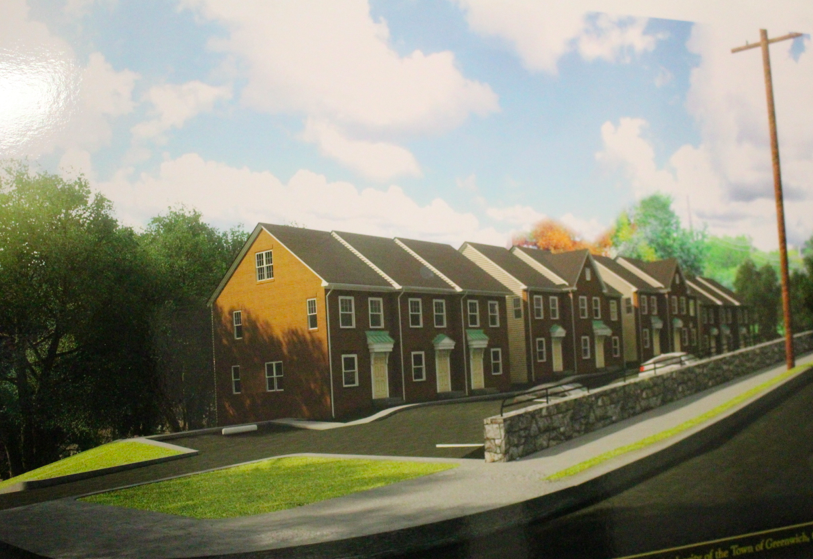 Rendering of proposed townhouses to be constructed along Hamilton Ave. The proposal received MI status approval from Selectmen and will next go before P&Z.

“It’s a game of chess trying to move around 144 families,” Yankowich said, of housing existing tenants on site during construction and renovations.

Six new three-unit buildings would be constructed first. Next, families would move into the newly constructed buildings in order that their apartments be reconfigured and renovated.  However, Yankowich said there would be a few exceptions.

Yankowich said seniors living alone in two-bedroom units are considered “over-housed,” and would be moved out of Armstrong Court to other senior housing in town. He said ideally seniors would live in buildings designed for them, rather than  assigned to first floor units. 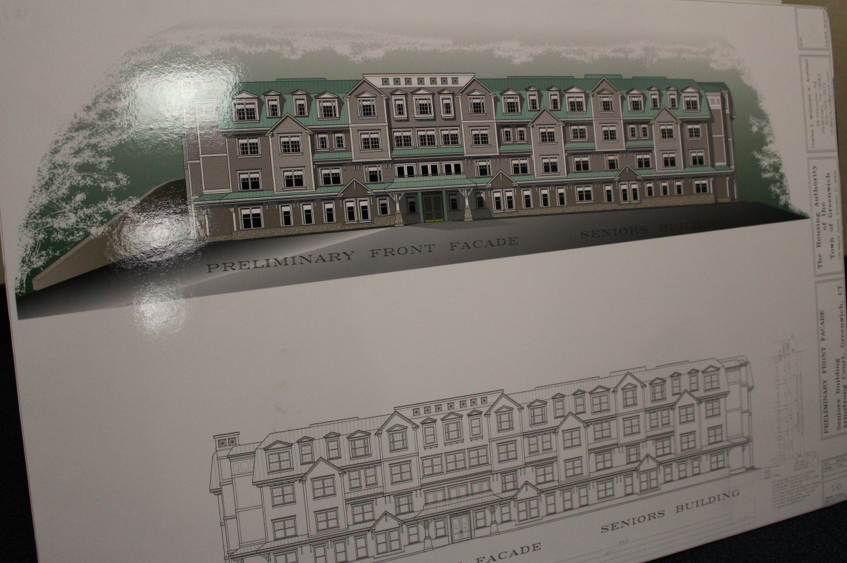 Off the table. Rendering of proposed seniors building that has since been removed from the proposal.

If not Booth Place, Where?
“If not Booth Court, where? Where does land exist?” Marzullo asked, about where senior housing might be constructed.

Yankowich said scatter-site development doesn’t work for seniors, and that senior housing needs a critical mass to trigger amenities like a generator, an elevator, a storm shelter and services like TAG and visits of social workers.

There is a growing need for senior housing in Byram. Yankowich said that 60% of residents at McKinney senior housing came from the Byram, Pemberwick and Chickahominy neighborhoods.

Yankowich said approximately an acre to 1-1/2 acres would be necessary to locate a new senior housing complex and, ideally it would be near a village.

Yankowich pointed out that the Town’s largest seniors housing facility, Agnes-Morley Heights, has not affected property values. In fact, on the contrary, Yankowich said, “Most people don’t even know it’s there. It’s a matter of good planning on a relatively small piece of land in town.”

Dawn Fortunato, an Armstrong Court neighbor, pressed the Selectmen, Yankowich and Bristol.  Referring to the State’s requirement of a certain number of units to qualify for funding, she sought assurances the Town wouldn’t return to develop “the hole.”

“Would those (additional units) go on top or would we try to stick them down in the hole?” she asked, referring to the spot he seniors building had been proposed, citing wetlands, easement over a sewer pipe and whether the soil is contaminated.

“I just want to make sure that nothing’s going to go down there,” she added. “We’re all for low income housing. I came from low income housing,” she said, adding she wished there had been improvements at Wilbur Peck years ago.

Fortunato asked the status of soil tests at Armstrong Court. “We all deserve to live in a healthy environment,” she said.

“It’s at the lab and we’re waiting for it to come back,” Yankowich said of the EPA probe, which will become part of public record. “But , we’re not going to be building there, so…”

“We have every right to know what’s in the soil,” Fortunato said. “We have five residents on the street with cancer.”

Tesei acknowledged Fortunato’s trust issue. “The issue with the formula is going to have to be a caveat on our approval. We’re approving you, but contingent on the calculation of those numbers,” Tesei said.

As for Fortunato’s concerns about soil, he said, “This is the world we live in. We deal with it as the need arises. But you want to know,” he said to Fortunato. “We want to focus on specific questions to the item on the table, which is the MI improvement. This isn’t a public hearing on water quality or anything else.”

Bristol clarified the next steps. He said applications are pending before the Planning and Zoning commission, but the senior housing application would be withdrawn.