He is the second BOE top official to announce their departure this month. On Aug 15 director of human resources Bob Stacy announced he had accepted a position at Stamford Public Schools. His last day is Sept 12, 2019.

“John will be retiring on Oct 1,” communications director Sasha Houlihan confirmed in an email response to GFP’s request for comment on Hopkins departure, adding that Hopkins position will be posted.

“If needed, we may go with an interim,” she added.

Debra Hess, a member of the Audit Committee that regularly reviews areas to be audited, said, “The audit of food services was put on the agenda back in the spring and I was supportive of doing the audit. At the time, there were discussions regarding pursuing other alternative solutions to deliver the service.”

“The audit was being performed by the Town’s internal auditor. I am not aware of the next steps to completing the audit. The Audit Committee has not met since its last meeting in July.”

Houlihan said the district will continue to work with the auditors as needed.

Last year parents ratcheted up demands for improved cafeteria food. Coincidentally it was also the first year the department made a profit since 2005.

But all the trends are not rosy.

While the number of students on free or reduced lunch continues to grow, fewer of the students take advantage of the program. 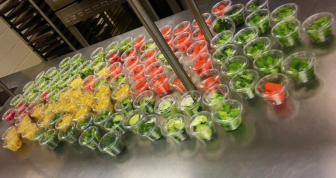 A Food Service Committee was formed in 2015 to review the program and make recommendations to the Board of Education to break even financially as well as explore contracting out food services to a third party. 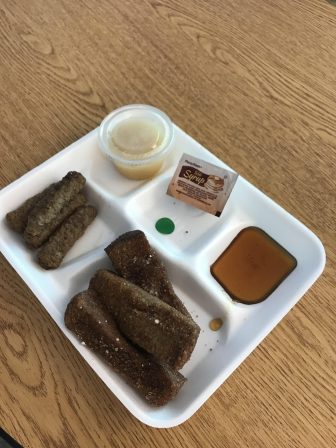 The moment had a BOE Ground Hog Day quality.

“This discussion of better more healthy food options is as old as the hills,” said Peter Sherr.

Lauren Rabin, the BOE member on the School Lunch Fund Committee, agreed there had been previous efforts. But, she said, “Everything we have tried has wound up coming back to staffing.”

She pointed out that survey data for participation in school lunch was revealing.

“We’re serving less meals per day and there are more students in the system,” she said. 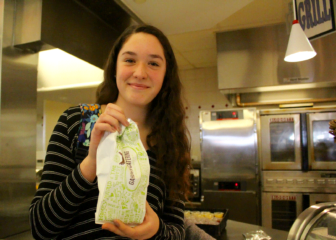 Back in 2015 the  GHS cafeteria had outsourced some of its menu to Garden Catering, and the nuggets were such a hit that overall volume in Cardinal Cafe increased. GHS, students also have the option of Domino’s Pizza.

And yet still, on any given day students order and pick up everything from Chicken Joe’s to Arcuri’s right at the curb.

Ms. Rabin said,  “We’re competing with Uber Eats and Grub Hub. Even at the elementary and middle schools, parents are driving, not a bagged lunch or sandwich, but Chipotle to their kid.”

Karen Hirsh, from PTA Council said that in 2017, the National PTA expressed disappointment with the relaxing of nutritional standards for school meals.

A pilot program could require one or more schools to go off the National School Lunch Plan, which reimburses the district for every meal served.

The district will receive close to $780,000 this year through federal and state food programs to assist in proving food to those in most need.

At that same hearing, Ms. Pierson, who has served on the Health & Wellness committee for five years, said the committee had worked with Mr. Hopkins and improved quality and nutrition of food.

Still, she said those changes are minor and fail to  address what parents and students have wanted for years. “Real, substantive changes to the quality, nutritional value and taste of the student lunches in our schools.”