A “moderate income” application for a seven-unit apartment building at 62 Mason Street went before the P&Z commission on Tuesday night.

The applicant, The Battle Hill Corporation, seeks to redevelop the property which currently features a house dating back to 1882 (according to the Assessor’s office).

Representing the applicant was attorney John Tesei. With him was local developer Albert Orlando of Orlando Development Company and architect Niko Nakos with Greenwich based Steven Mueller Architects. 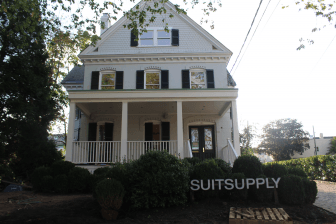 Two doors south of 62 Mason Street is the Suit Supply building which was renovated from head to toe to accommodate the men’s clothing retailer.

Mason Street is a mix of residential and commercial buildings, but 62 Mason Street is part of a tree lined row of turn of the century houses in the CGB zone, which stands for Central Greenwich Business.

The moderate income regulation, Sec. 6-110 of the Greenwich Building Zone Regulation, is also referred to as “workforce housing.”

Sec. 6-110 is a Town incentive-based regulation that allows for additional height and Floor Area Ratio (FAR) in exchange for 20% of residential units being moderate income units. The goal is to offer rents affordable to teachers, police and Town Hall employees, for example. 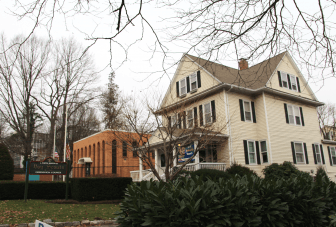 The Boy Scouts are across the street at 63 Mason Street and next to that is First County Bank at 59 Mason Street.

The applicant’s proposal is for a three-story building with seven units.

There would be three 2-bedroom units on the first floor, two on the second floor and two on the third floor.

Two of the seven units would be for moderate income tenants.

Each unit would have an outdoor terrace in addition to access to a roof deck and a small back yard. A parking garage would be entirely underground and none of the garage space counts toward the FAR.

As is typically the case with applications that come in under the Town’s moderate housing regulation 6-110, the applicant is proposing the maximum FAR. Effectively when it comes to incentives, the maximum has become the minimum.

Some of the commissioners balked at the resulting “massing” of the building at .9 FAR.

“The CBG zone is .3 FAR, and you’re requesting .9,” Commissioner Nick Macri said. “You’re giving me two units and I’m giving you triple the amount of FAR.” 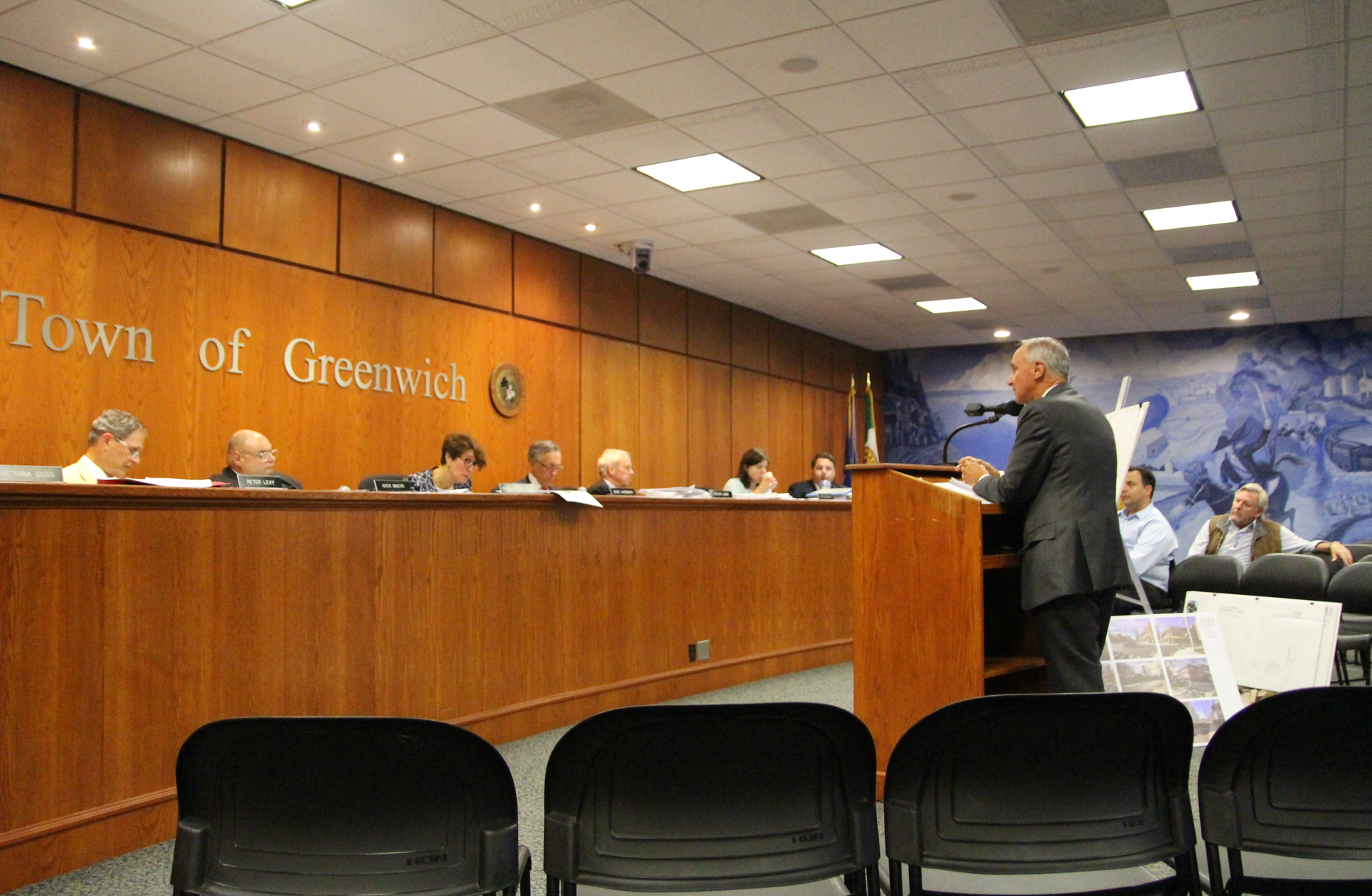 Mr. Tesei offered the commission a history lesson of the Town’s efforts dating back to the 1980s to make moderate income housing a priority.

He pointed out that the Town created 6-110 to encourage moderate income housing and the application complied with the regulation.

“This commission ultimately decided that we want to get up to 20% moderate income units under our Town formula with priority for Town employees, and we’ll give you .9 FAR. Not up to .9 FAR, but .9. That was the quid pro quo to get to 20%,” he said.

A large Town tree was posted for removal earlier on Tuesday to make way for  the entrance to the underground parking access.

Currently there is a driveway on the right side of the property.

According to the Tree Warden, the tree is a London Plane, which is similar to a sycamore, only it’s more olive color.

“I think I planted it about 20 years ago,” said tree warden Steve Gospodinoff on Wednesday. 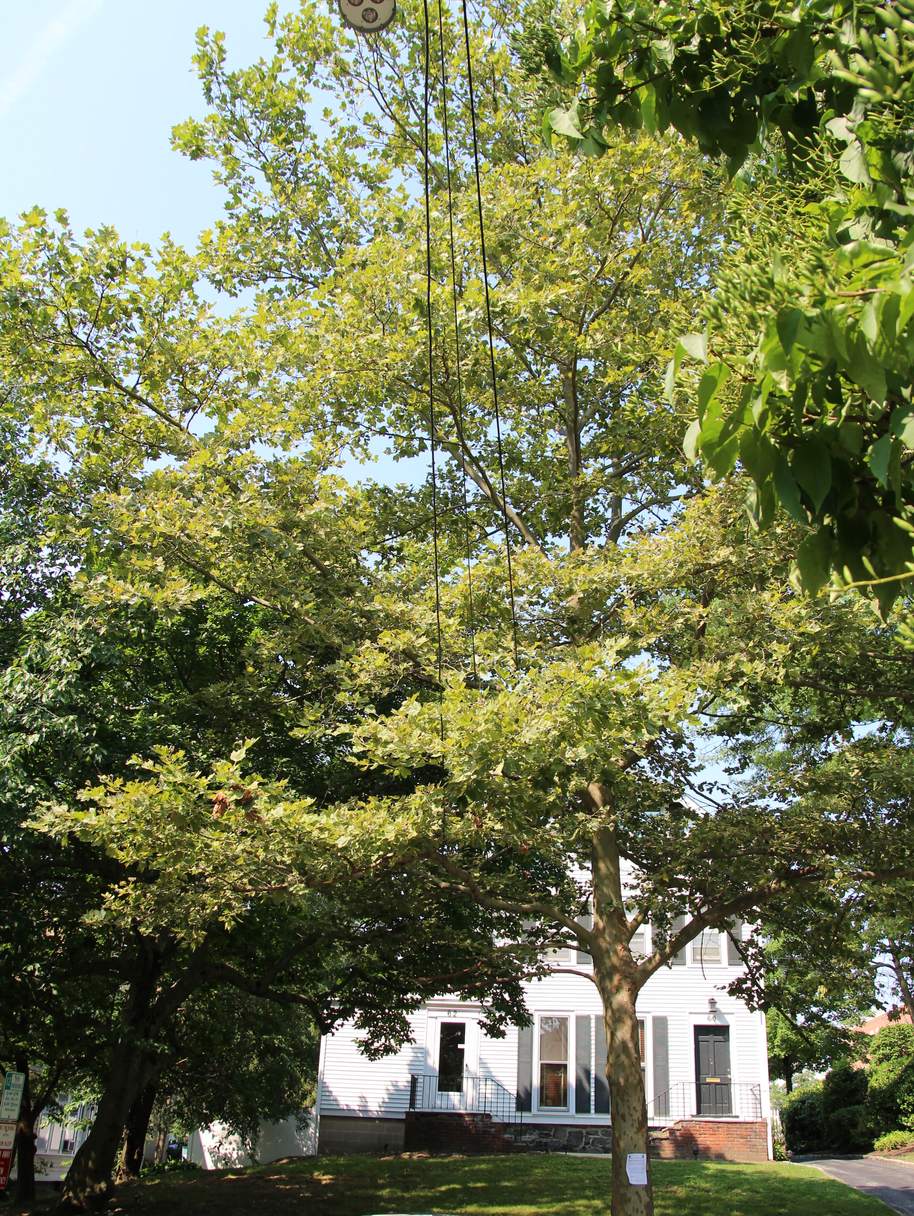 Even though P&Z commission was reviewing the application for the first time, it had already gone before the Architectural Review Committee.

Attorney John Tesei said, “We spent many months including close to a year with the Architectural Review Committee (ARC) on various iterations.”

Tesei said ARC had reacted negatively to an earlier Italianate design, and suggested the applicant create a mansard roof.

Their idea was to make the building look more residential.

Tesei said the proposed building height had already been reduced  from 40 ft to 33 ft, plus a 3 ft parapet.

“My client said he hated the mansard so much he refused to pay for the rendering,” Tesei said. “It’s a true story.”

“The mansard roof – that was really the last piece of puzzle with ARC. They felt, rather dictated, that the mansard be introduced at the third floor level.”

That said, the ARC is an “advisory” committee to the P&Z commission.

P&Z commission chair, Margarita Alban told Tesei, “They are advisory to us and sometimes we don’t take their advice.” 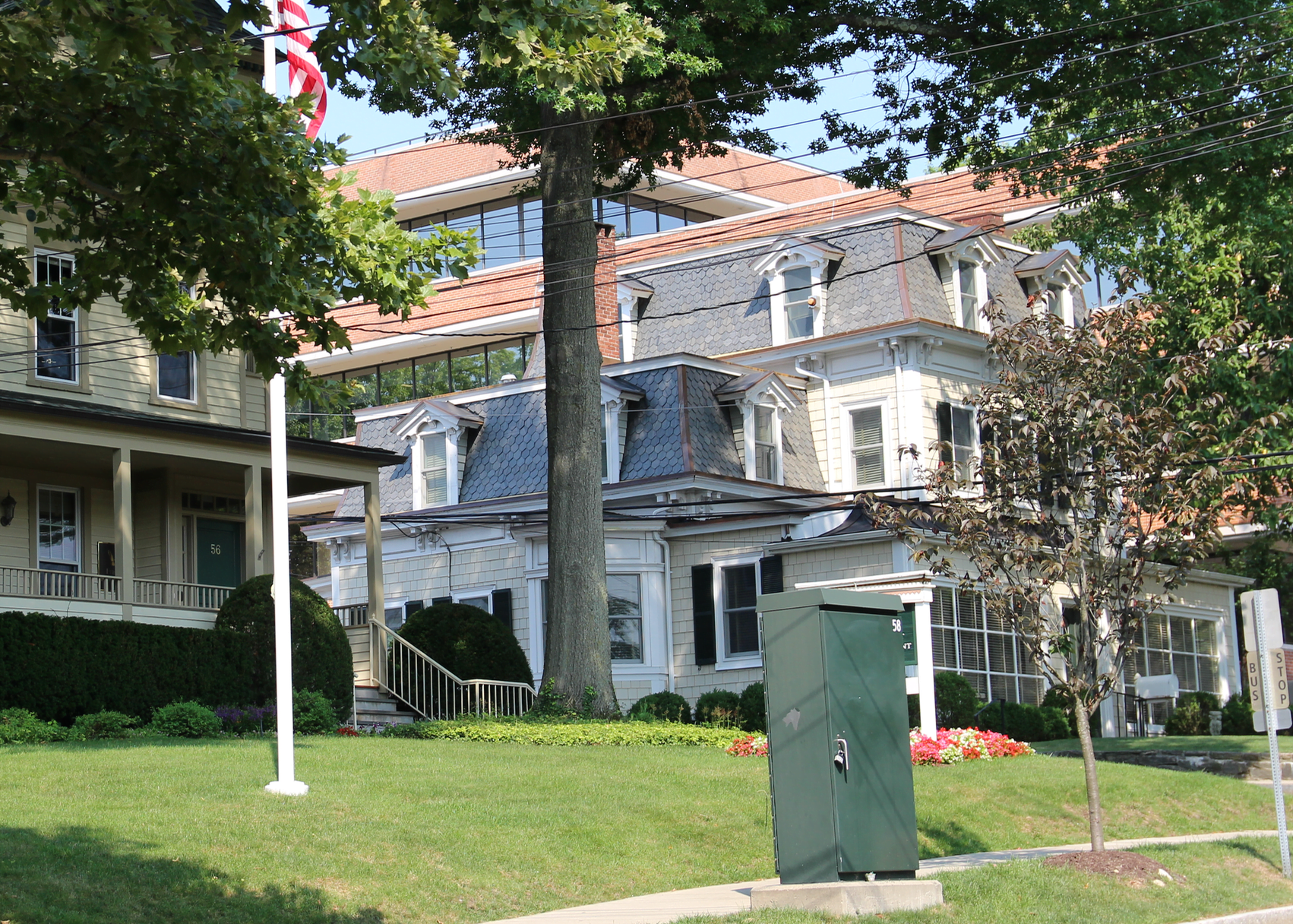 The commission noted there is a successful mansard roof two houses away from #62, (see above), but they felt the applicant’s proposed mansard failed to match the rest of the building.

“Now we have Second Empire, but the Italianate details are still there,” commissioner Macri said. “The mansard roof doesn’t become successful because the details of the rest of the building have not followed suit.”

“I’m not partial to mansards myself,” Ms. Alban said. “But a whole body of people weighing in say it reduces the perceived bulk.”

During further discussion on the bulk of the proposed building, commissioners floated the idea of the applicant reducing the two moderate units to one in order to bring the size of the building down to .7 FAR.

Attorney Tesei said his clients had spent a lot of  money and used months of their time working with ARC, and were abiding by the incentives in regulation 6-110.

Mr. Macri said there was more at stake in the trade-offs of FAR and height incentives to achieve more moderate income housing.

Mr. Macri also pointed out that the language of the regulation is that the commission “may” allow the incentives and that the significantly increased FAR is not automatic.

“Are you saying it is all or nothing?” he asked Tesei.

“If you’re going to say you have to reduce FAR and keep two units, then, yes it’s all or nothing,” Tesei said. “The reduction has to be quid pro pro in terms of giving up a moderate unit.”

“I’m not sure my client should be wasting more money if I don’t know the (commission’s) consensus. I know one commissioner is dead set against it,” Tesei said.

“It seems to me you’re attempting to bully the commission. You’re raising your voice,” said commissioner Peter Lowe to attorney Tesei. “It’s not necessary. And to say,  ‘Vote now or I don’t waste any more money.’  You’ve been interrupting me to make this point. We’re not in a position to pass judgement now. …It’s a business decision you have to make.”

Ms. Alban offered to poll the commissioners about reducing FAR to make the building less massive, and in turn losing one of the two moderate units.

“I think this is a great spot for affordable housing,” said commissioner Victoria Goss.

Commissioner Peter Levy said, “This area is under a lot of pressure to be developed, and I appreciate that the developer wants to do moderate income. I think you’re going in the right direction.”

Commissioner Hardman said, “Moderate income is very important. In the context of the existing regulations, the project at .9 FAR makes sense. …I feel comfortable with this building that it doesn’t overwhelm the neighborhood.”

Commissioner Macri said the perception of the building is that it is tall. “Move it back so we’re not seeing tall buildings. The issue with this building is that there is a significant vertical rise right on the property line both north and south. Residential scale buildings are not like that,” he said.

“That plan with the mansard roof that Mr. Macri critiqued was approved by at least 5 architects on ARC, some of them are landscape architects,” Tesei said.

There was discussion about the various buildings on the block, and the potential impact to the streetscape.

P&Z Director Katie DeLuca noted the house next door to 62 Mason has two peaks, and on the corner of Amogerone there is a house with a mansard roof.

Ms. Alban said there was a lack of consistency in the architectural elements with a mansard roof on an Italianate building. “I don’t care which way you go, it has to be more consistent,” she said.

Mr. Levy said the overall massing will look reduced with a mansard. “But that’s not what you’re doing with this design.”

“If you tie a mansard roof into the architecture, it could be successful,” he said.

“You have one design that works and another that doesn’t, but they both need to be significantly polished. I prefer the mansard, but the details need to be looked at hard,” Macri said.

“A successful mansard is at Milbank and Lincoln,” Macri added, referring to 138 Milbank Ave, though numerous neighbors protested its bulky appearance at a Zoning Board of Appeals (ZBA) meeting during the application process. 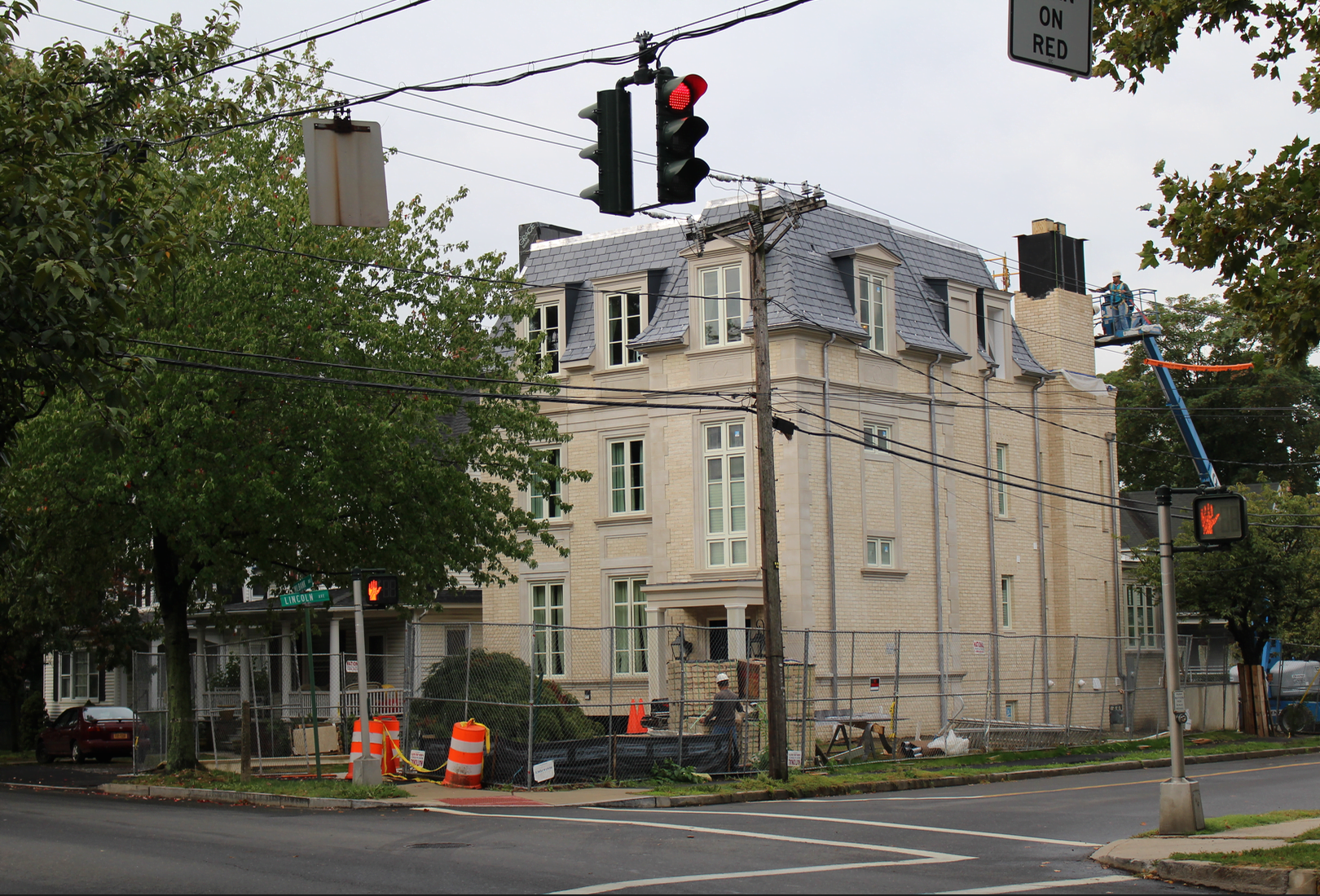 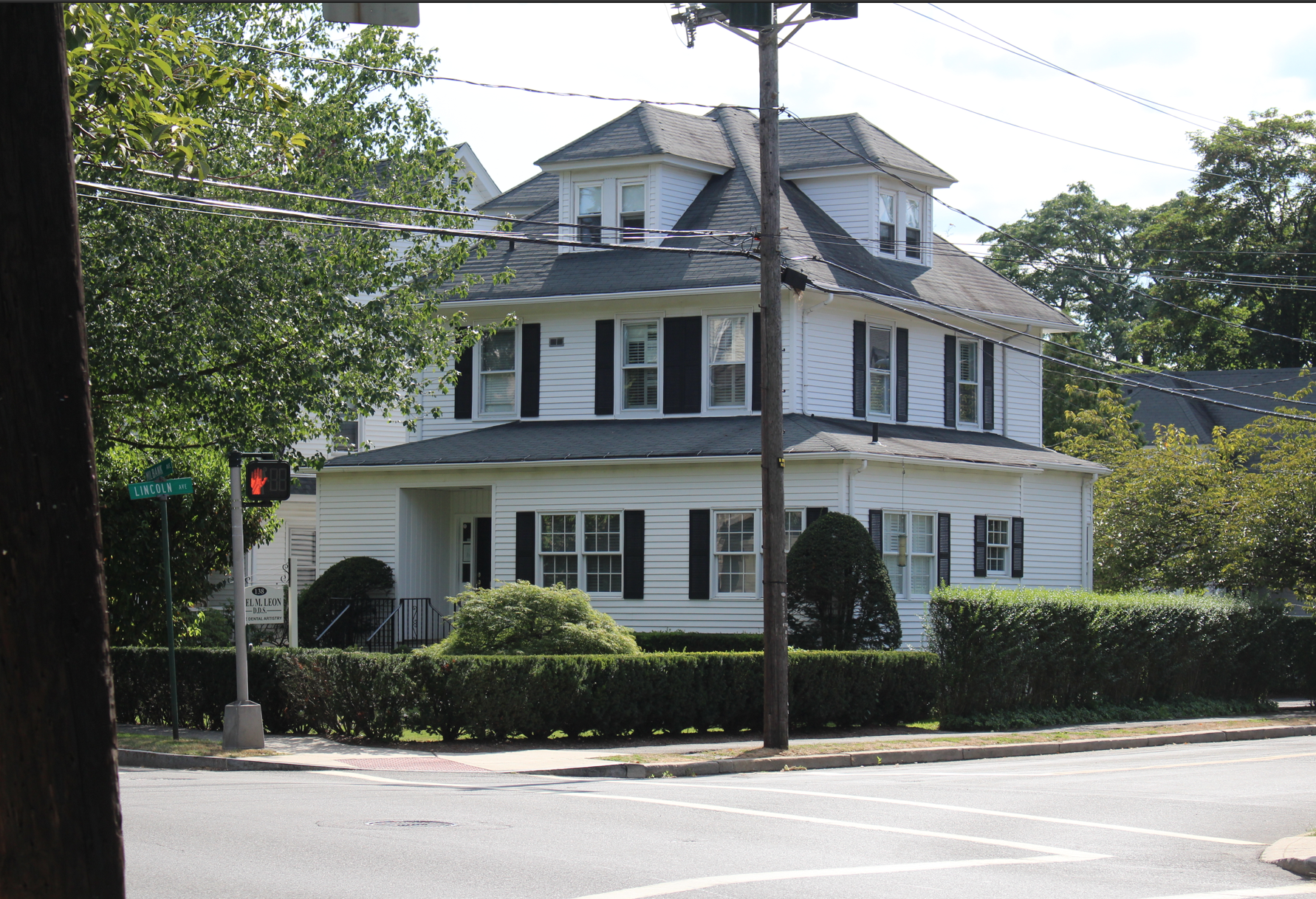 138 Milbank Ave was torn down. It had a non conforming dentist’s office downstairs. In exchange for removing the nonconforming element, the applicant received incentives.

The applicant proposes 16 underground parking spaces for the seven units.

“We’re two over (the required number) and the chances are that not everyone is going to have two cars,” Tesei said when asked about parking for guests in the downtown area where parking is tight.

At the end of the discussion, the commission left the application open and  asked the applicant to come back to a future meeting and make the mansard match the rest of the building and consider reducing the two moderate units to one and bringing down the FAR to .7 from .9.

At the end of the discussion the item was left open.

An early iteration of proposed 62 Mason Street apartment building has evolved after feedback from the Architectural Review Committee.