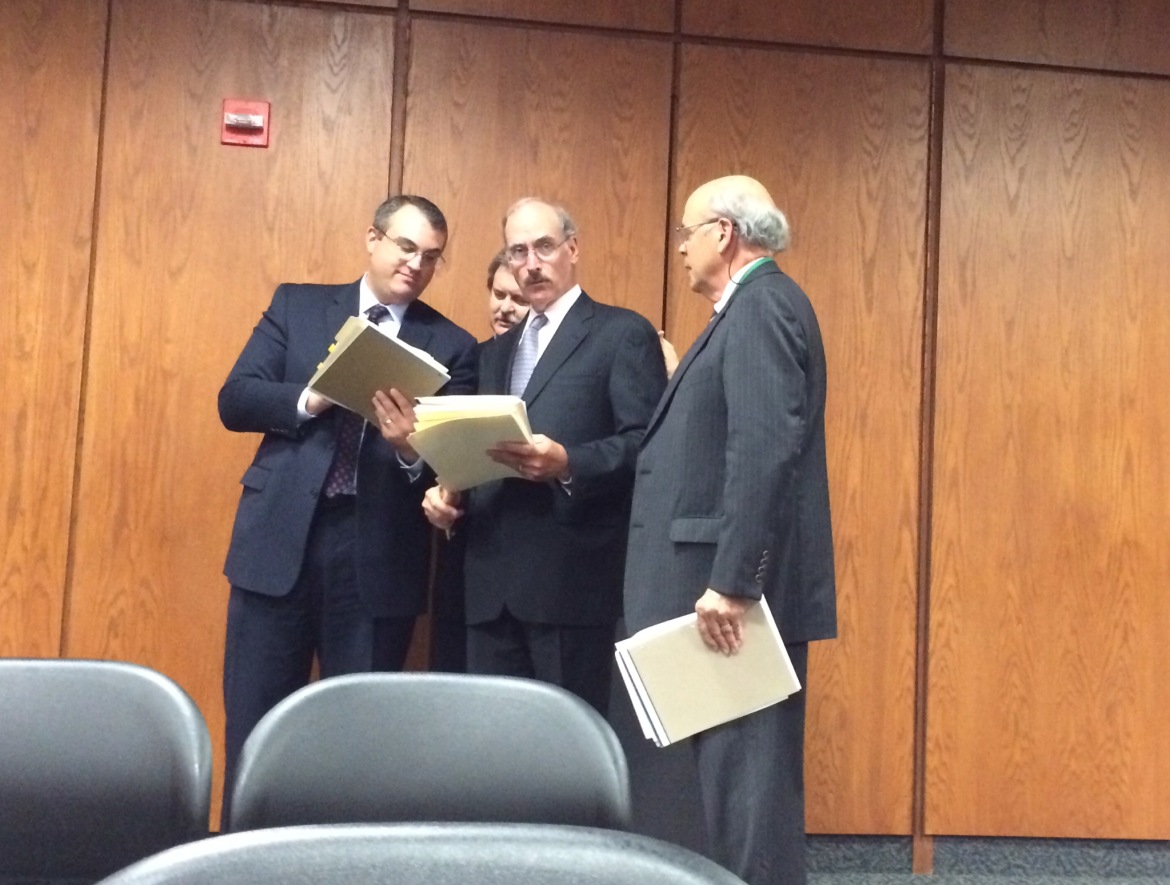 From the outset at Thursday mornings BOS meeting, First Selectman Tesei described the addition of “item 8” to the agenda as unprecedented. “This is not a pubic hearing,” Tesei reminded those who turned out. “We’re not going to take laborious comments,” he warned.

Town Attorney Wayne Fox explained that only a single paragraph in the draft settlement was to be voted on by the Selectmen on Thursday morning.

“That is the only paragraph that applies to the Town of Greenwich. The remainder would have to be voted on by the Zoning Board of Appeals.”

Attorney Fox said that the plaintiffs, Greenwich Reform Synagogue, wanted the added paragraph, “so that they would have the federal court continue to have jurisdiction over this matter should there be any problem in the permitting process going forward.”

“They (the Plaintiffs) want to be able to go back to federal court in the event there is a problem in the permitting process and have it resolved at that level.” – Mr. Wayne Fox, Town of Greenwich Attorney

“I have not known our land use agencies to inhibit action on things,” Tesei said.

“Who wouldn’t agree with that? This is what we do every day,” Marzullo said, referring to the paragraph at question**. “This paragraph could be in any agreement.”

Fox described the issue as complex and referred back to what he described in June as “a the lack of action taken by the ZBA,” when the 2-2-1 vote resulted in a de facto denial of the GRS application back in June, resulting in the federal lawsuit. At that June meeting, Selectman Theis went on record objecting to the proposed synagogue on busy Orchard Street.

At that meeting, Selectman Theis, who lives on Sinawoy Rd, said he is concerned that Town is fast becoming overgrown and  overdeveloped. He described his own street as a racetrack. “I hope decisions aren’t made based on who has the bigger bank account,” he said back in June.

At that marathon June 4-1/2 hour meeting, about a dozen Cos Cob neighbors voiced a series of concerns ranging from worries about declining property values to pedestrian safety for children who walk to Cos Cob School and Central Middle School, and both adequate parking and a proposal for a shuttle bus back and forth to CMS and Greenwich Baptist Church.

“Sometimes you only have five adults coming…Generally there’s a very small number of people in the synagogue,” said GRS attorney Tom Heagney at the June ZBA meeting. “We didn’t just design this on the back of a napkin last week,” Heagney added in a moment of frustration.

Fast forward to Thursday morning, Oct. 2, and Theis broke with his fellow selectmen Marzullo and Tesei when it came time to vote on the an amended paragraph, even after the word “expedite” was deleted from the phrase: “Greenwich Parties will use reasonable efforts to the processing of the Synagogue’s applications for additional necessary permits or approvals.”

“I remain in opposition to the project and recuse myself, and continue to recuse myself,” Theis said, though Mr. Perloe approached the selectmen to ask why Mr. Theis had voted against approving the amended draft only then to minutes later describe himself as recusing.

At that point Mr. Theis said he withdrew his earlier vote, though it didn’t change the outcome. “In that case I take my vote back,” he said.

Christopher Von Keyserling: “I Want Some Assurance from the Selectmen that This Puts the RLUIPA to Rest.”
Mr. Von Keyserling, of District 8 RTM asked the Selectmen for clarification on the status of the federal lawsuit based on the law, RLUIPA, or Religious Land Use and Institutionalized Persons Act.

“It is not clear to me whether this settlement does anything to effect that lawsuit at all. It doesn’t seem to me this is settling that RLUIPA lawsuit,” Von Keyserling said. “It seems in a way there is a very subtle shift… Generally speaking, it seems the burden of proof is on the Town rather than the applicant.”

GRS attorneys said that since the ZBA, by virtue of a tie vote, denied their application for the house of worship, many modifications to the proposed synagogue had been made. “That is yet to come. That’s going to occur at a future date,” the attorney said of the ZBA’s vote. “They didn’t specifically vote against it. It was a non-vote, so it counts against it, based on Connecticut law,” he said of the de facto denial.

Sarah Darer Littman said she had a petition of 26 parents who are can’t attend the special meeting because of the open house. She beseeched the Selectmen to re-schedule the special ZBA meeting.

“Perhaps they were unaware of the open house,” Tesei said of the ZBA, adding that he understood, as a parent himself. I can’t impose my will on them, nor can any of these gentlemen,” he said. “There is nothing I can do to get them to change it,” he continued, adding that the BOS doesn’t have jurisdiction.

Theis made a motion to ask the ZBA to postpone the special ZBA meeting to a later date, but no one seconded his motion. 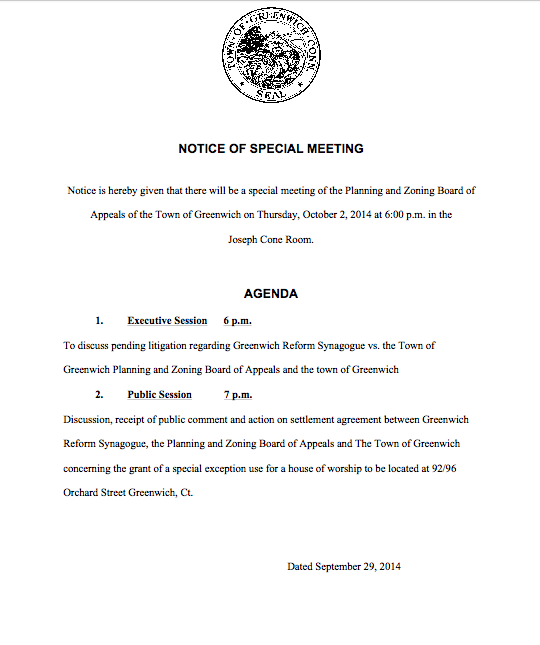 Mr. Theis made a motion to postpone the special ZBA meeting after Cos Cob neighbors’ voiced concerns that the hastily scheduled meeting conflicted with a long-scheduled Cos Cob School open house.

While Mr. Tesei was not sympathetic to Cos Cob parents who find themselves double booked, he did refer to a letter from the pastor of Greenwich Baptist Church about arrangements for overflow parking.

The issue on the agreement on parking with Greenwich Baptist church “is something that needs to be given greater clarity given the correspondence we received,” he said to the Town Attorneys.

Mr. Marc Abrams, co-president of the Greenwich Reform Synagogue thanked the Selectmen and said his congregation looked forward to becoming great neighbors in Cos Cob.

Wendy Schreiber, Marc Abrams’ co-president of GRS described the timing of the meeting as “the middle of the holiest holiday in the Jewish calendar. “I respectfully ask that you make no changes to the timing of the meeting tonight…It’s a little bit of an imposition for us, but what would be more of an imposition for us is to be delayed, and delayed, and delayed… We respectfully ask that nothing else  be delayed for us.”