On Wednesday at noon, Greenwich’s Tree Warden Bruce Spaman held a public hearing on the fate of a Pin Oak tree on Mead Ave in Byram which is a stone’s throw from New Lebanon School.

The tree is on the side of Mead Ave with no utility wires, but there is a second massive Pin Oak across the street that has grown around the wires. That too may be in jeopardy.

Neighbors turned out to defend the tree’s right to stand. Matt Popp said he moved from Chestnut Street to Mead Ave precisely because it was lined with trees.

Members of the Highway Division of DPW, Superintendent Joseph Roberto and Peter Kurpeawski attended the meeting, explaining they had brought the fate of the tree to the Tree Warden’s attention because they plan to do milling and paving on Mead Ave.

Kurpeawski also said the roots coming up over the curb are a “road hazard.”

Spaman said his department received letters and correspondence objecting to the removal and that triggered the public hearing.

“This road has been identified to be paved and we approached the tree department. The decision is through Bruce (Spaman),” Kurpeawski said. “…It’s an obstruction in the eyes of the highway department.”

Spaman explained that the tree was posted because highway department’s plans would seriously damage it. “We can’t ignore that,” he said. 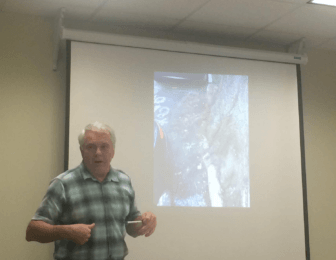 Tree Warden Bruce Spaman shared a photo of the Pin Oak on Mead Ave where the Highway Dept put a gap in curb to work around the tree roots. July 25, 2018

Roberto said the Highway Dept had already taken lengths to protect the tree by skipping several feet when they installed new curbing.

“We took pains to skip where the specimen trees were and still put in a curb.”

He said the Highway Dept has in the past coordinated with the Tree Warden.

“We coordinated with the tree warden, before, during and after construction. We walk the site with the tree department,” Roberto said.

Longtime neighbor Matt Popp took issue with that and said when work was done outside his house that the trees “took a beating.”

“There was improper cutting of the roots, no protection of the roots. As a tax payer I’m paying for new trees. If that’s was an example of working with the tree department… I didn’t see it,” he said.

Alex Popp, Matt’s twin brother, who also opposes cutting down the tree, said for 18 years he has worked at Riverside School where the Highway Dept cut roots of huge trees next to the school playground, and that as a result a massive tree fell across the playground.

He said if it weren’t for the children being on a field trip that day, they’d have been on the playground when the tree fell.

“Realtors bring prospective buyers to the area because of the trees,” he said of Riverside. “On Lockwood the sidewalk is crazy going around the trees.”

Alex suggested doing a curb bump-out to protect the tree and serve as a traffic calming measure.

“Maybe in the future we could bump it out like they’re doing at Old Greenwich School,” he said. “It’s a healthy tree. If we’re going to cut this tree down then there’s a lot of trees to cut down in Riverside that overhang streets and sidewalks.”

Mr. Roberto and Mr. Kurpeawski said they weren’t in the tree business.

JoAnn Messina, the director of the Greenwich Tree Conservancy said,  “You could be. You could be part of the solution. I think that would be really helpful.”

Messina said trees are needed on the west side of town and in downtown. “We need the communication (between Tree Conservancy and Highway Dept).”

It was pointed out that 206 mature trees had recently been removed to make way for the new New Lebanon School.

“These roots tend to ooze out into the travel area and sometimes curl right over the curb and go into the street,” Spaman said to Roberto and Kurpeawski. “What you’re proposing will wipe out the stability of the tree.”

Neighbors whose house is closest to the tree came to ask the tree warden to cut it down. 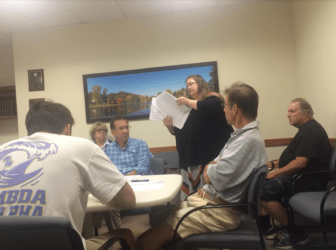 Kasie Peralta who lives in the house closest to the tree at issue said a blind woman tripped on the sidewalk by the tree and threatened to sue her family. She said the sidewalk cracks because of roots underneath it. July 25, 2018

Kasie Peralta and John Lambertson said the tree casts shade on their lawn and prevents them from planting grass.

They said the tree’s roots go through their yard and have gotten into pipes. They said their house was built in 1885.

“The roots go into our back yard. And we’re worried,” Peralta said. “It’s dropping branches around children. It is a safety issue.”

Spaman explained that old pipes are clay and crumble with age, unlike new pipes which are more robust. “The sewer laterals are usually old non-gasket clay tiles and the roots do penetrate them,” Spaman said.

“I’m planning to put aluminum siding on my house,” Lambertson said, adding that he was worried any falling branch could damage the siding.

Lambertson acknowledged that the town replaces trees that have to come down.

“I can understand that people having a problem with the tree coming down. We love trees,” Lambertson said. “We have plants. If we get it taken down, hopefully, we can meet half way and have new trees put up.”

Mr. Spaman said the tree at issue has a 37” diameter.

“It’s healthy as a horse,” he continued. “It’s flowing over the curb. It has no dead limbs.”

Spaman explained that Pin Oaks are generally good urban trees that can take these conditions. “But only to a certain point,” he said.

“What about me? I’m losing beautification of my yard. So now I don’t have grass. And I can’t plant grass. And my yard is now on a slope,” Lambetson said.

Peralta said she thought it was because the sidewalk was installed at an angle.

“I have heard there was discussion about milling or working around the roots of the trees,” Messina said. “I’d hope we save the whole tree including its roots. With Pin Oaks, the roots are shallow. It’s like cutting off your toes to fit in a shoe.”

Messina said she sympathizes with the neighbors. I have two town trees in front of my house that lose leaves and branches, and I can’t plant anything under the trees. …To me it’s important to have those trees. It depends on your perspective.”

Peralta said she was worried the sidewalk would crack.

“Where do we come in? Can we get something done for us?” Mr. Lambertson asked.

Spaman said if the highway department does what they’ve proposed it would be irresponsible to leave the tree standing.

Referring to the incident at Riverside School, he said, “They destabilized the tree and didn’t tell us. We dodged a bullet. Remember the Alamo.”

Mr. Spaman said it might be possible to put a bump-out in front of the tree rather than cut its roots. He said a little creative thinking might be useful.

The Tree Warden said he would issue his decision in three business days.