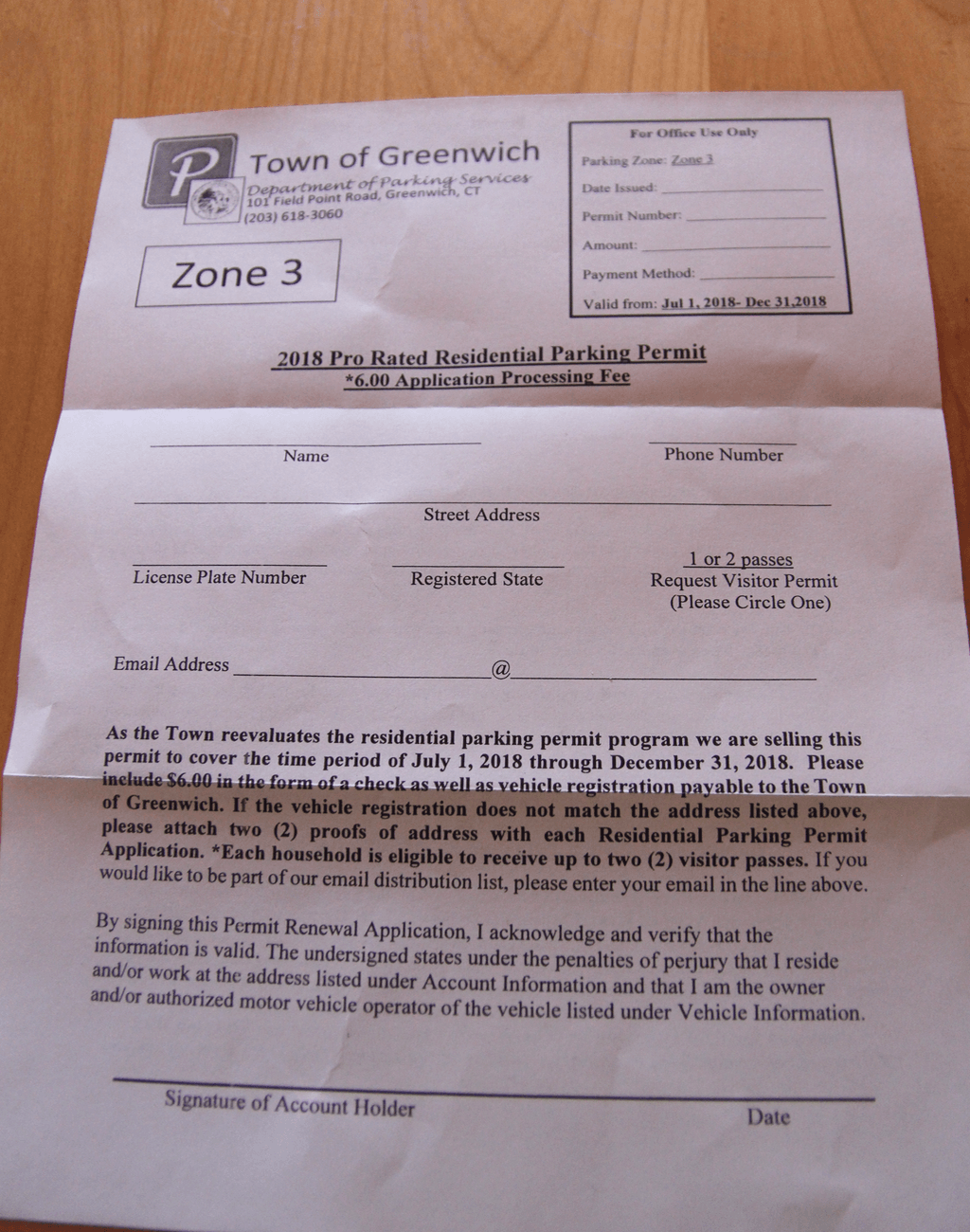 A call to Greenwich Parking Services to ask about a letter to residents in residential parking zones yielded abundant information.

Ron Lally, who for 16 years was risk manager for the Town, was brought in to help parking services with accounting and management issues in the department. He works there three days a week.

“We’re lucky to have experienced staff here,” Lally said. “Rod (Dioquino) has been with the department almost 12 years.”

Lally and Dioquino said the deadline to submit a form to renew residential parking stickers is August 1.

They also gave an update on multi space parking meters and the RFP for a consultant to advise the department.

Subsequently, Greenwich Police Captain Kordick was put in charge on an interim basis and he set about codifying many parking regulations that were in place, but never reflected in town code – and vice versa, parking regs that were in code but obsolete.

Around the time Azrelyant left and Kordick jumped in, the residential parking permit program, which Kordick said he would have loved to scrap entirely, went on hold.

Everyone with a 2017 parking sticker for their zone was told their expired sticker would be extended through June.

For a time, Capt. Kordick went on leave. When he returned recently, he resumed his work at GPD, but not at parking services.

Also, since Azrelyant’s job was eliminated, she has initiated a law suit against the Town, alleging there was retaliation for her speaking out about unethical practices and mismanagement and that she was unfairly fired.

Mr. Lally, a risk management specialist who worked full time for Greenwich for 16 years, was brought on by Kordick last December.

• Each household can request up to two guest passes.

Dioquino and Lally said they are prepared to process requests for new permits due by Aug 1 and have them out by the end of the first week of August.

In fact, they said the department has hired Joseph Sechi to oversee the program.

“If you don’t have a permit you’ll get a ticket,” Lally said, adding that the department is actively enforcing parking regulations in residential zones.

Back in February, an RFP went out for a consultant for parking services, but no vendor has been selected yet.

Mr. Lally said the RFP is for not for an outside management group to take over the department, but rather for a consultant to make recommendations.

“We have more of a team work atmosphere here than before,” he said. “For now the plan is to keep it in-house. We’ll see what happens.”

“What’s been discussed is an outside consultant to make recommendations on operations,” Lally contiued. “Any department could use a good look over.”

“I strongly recommended they do not go to outside management,” Lally said.

Lally said parking services wants to manage parking in Greenwich rather than see it as a way to make money, which is the model for other municipalities.

“It’s a quality of life issue,” he said. “We want to manage this. It’s not to make money or to support the general fund.”

Nevertheless, Lally said the department’s financial trends are very strong. He said the 2018 fiscal year was a record year with revenue in millions of dollars.

Lally was rosey on Parking Services. “The cooperation level with other departments is skyrocketing,” he said.

Aside from the residential program the department is moving toward mechanizing all the parking lots. 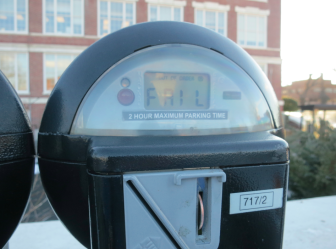 “We’re rolling out the multi space machine technology to all the parking lots in Greenwich and putting in capital request to redo all the meters in the streets,” he said.  “It’s big stride forward for the municipality. It not only helps the public so they can use credit cards but helps us in the back room to reconcile.”

Lally said there’s always a certain element of the population who want to use quarters or cash, so new meters will give people the flexibility for either method of payment, as well as paying by phone.

As for the single head meters, Lally said the department is looking to install meters that accept both credit cards and cash in places like Greenwich Ave.

The department is working on installing multi space meter machines, or MSNs, and they are already installed in the Amogerone Lot (behind CVS on Greenwich Ave).

The next parking lot will be Liberty Way, which he expects will be completed in two to three months.

He said Amogerone and Liberty way are the two biggest lots in Greenwich, excluding the Railroad parking lots.

Lally said that there are always people who prefer to use quarters or even dollar bills if that’s an option, and that his recommendation is to continue that option as well as pay by phone.

After Liberty Way, the next lot to be upgraded will be Bruce Lot, which is the lot behind the public safety complex on Bruce Place, followed by Volunteer Lane which they refer to as Lafayette Lot, a long term lot, off Layafette Place.” 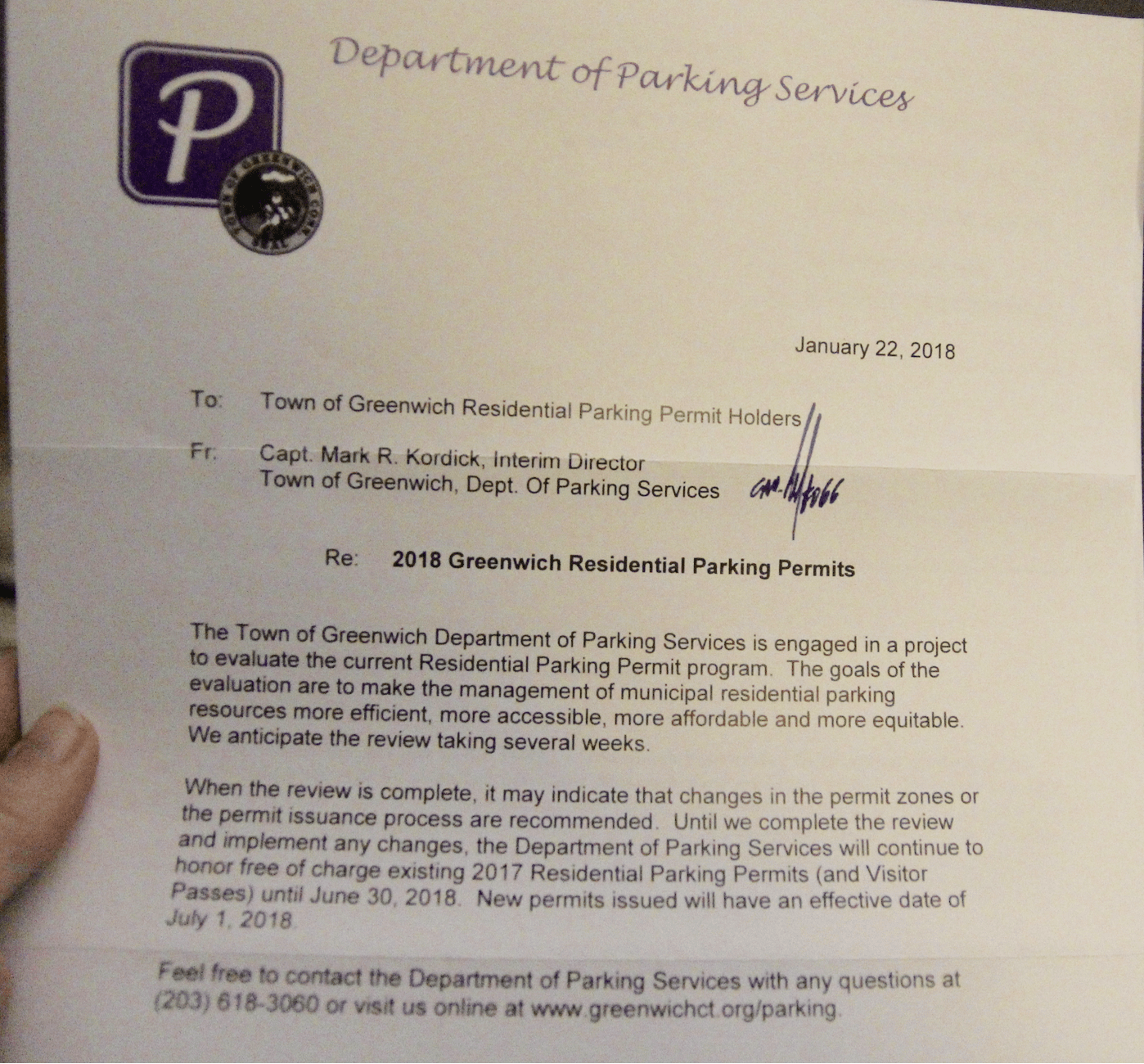