At the June 27 Board of Selectmen meeting, the agenda included a request from Greenwich’s Housing Authority for Municipal Improvement (MI) for 51 units of senior and disabled housing to be added to the McKinney Terrace senior housing development. 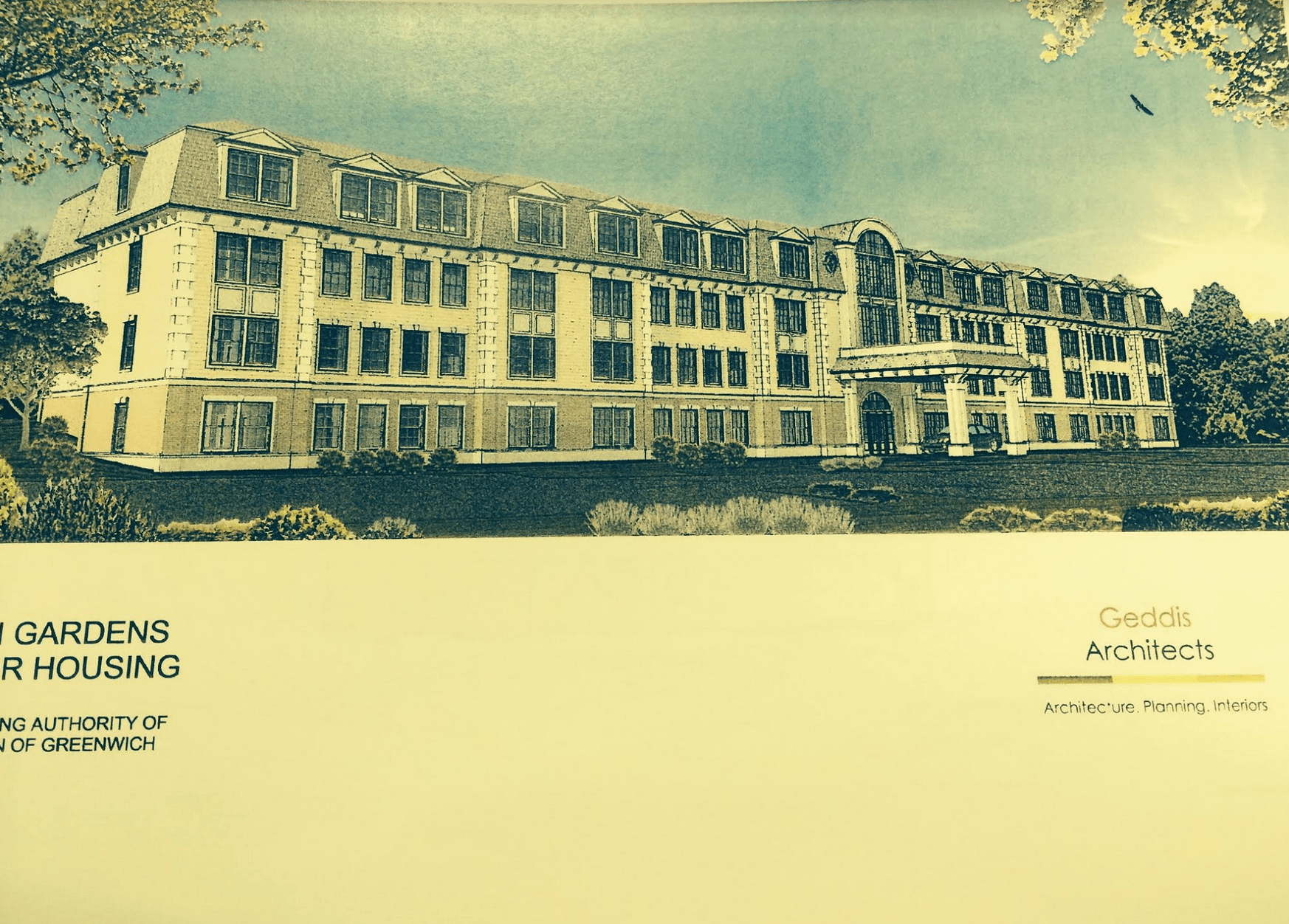 Geddis Architects rendering of proposed HATG seniors/disabled housing at McKinney Terrace. Presented to Board of Selectmen in 2018

McKinney Terrace, which opened in 1988 at the former Byram School, is located on Vinci Drive, off West Putnam Ave.

With the project, the Housing Authority hopes to bring the town closer to compliance with the state’s requirement that 10 percent of its housing be “affordable.”

It is also a goal of Greenwich’s POCD to increase the town’s affordable housing inventory.

The Housing Authority currently has 1,200 units of affordable housing, roughly half what it needs to be in compliance.

The Town’s Commission on Aging submitted a letter supporting the project.

Financing, according to the HATG, “is envisioned to be 4% tax credits with commercial bank loans and other debt instruments.”

Housing Authority board chair Sam Romeo and executive director Anthony Johnson explained to the Selectmen that there would be no private parties in the transaction and no Town money will be used.

“That doesn’t mean you have to be asset poor to live in one of our family housing,” he continued, adding that income on assets does count toward the maximum income.

“As long as your net income – even from your million dollars if you sold your home and it’s in the bank –as long as you’re not generating in excess of $48,000 as a single person, you can still be housed in our properties.”

“We actually have had people there who have inherited money, but may not have earned a lot of money,” Mr. Johnson continued.

The project cost is projected to be between $11 million and $15 million. The Housing Authority already controls the land.

The rendering presented features an all-brick building. However, Mr. Johnson said that might be adjusted to lower the cost.

“Once we get through the zoning process, and all the other things we have to do, we can have the building up in a year,” Mr. Romeo told the Selectmen.

The McKinney Terrace site has an existing senior building with 51 studio and one bedroom units. There are also 21 units of family housing in three buildings. Both developments were originally financed through loans from the State’s Dept of Housing.

Romeo and Johnson said there is a pressing need for affordable housing in Greenwich, especially given the expense of market rate rentals.

Mr. Romeo said that according to the National Low Income Housing Coalition, a Stamford resident making minimum wage this year would need to work three full time jobs or 120 hours a week to afford a modest two-bedroom apartment downtown, and that would hold true in Greenwich.

Whether or not the Selectmen vote in favor of the project, the Municipal Improvement process has many hurdles and there will be many chances for community input.

Wednesday’s Selectmen meeting was not a public hearing, and attendance was scant. With the new project coming on the community’s radar, it remains to be seen how Byram neighbors will react.

Back in 2009 the Byram community erupted at the prospect of additional housing at McKinney Terrace and the controversy made its way into election season with all selectmen candidates including Peter Tesei opposing the proposal saying it was a less than an ideal location for seniors.

Since 2009, a 2014 Housing Authority proposal for 51 units of senior housing on Booth Place behind Armstrong Court did not materialize. There were issues with the location at the foot of a steep hill, neighbor concerns about possible contamination as the location was a stone’s throw from the dump and brook, and difficulty creating an entrance.

Still, pressure is ratcheting up for affordable housing in Greenwich.

Developers are using the 8-30g affordable housing statute for their proposals.

A municipality is subject to the 830g statute if it has less than 10% affordable housing, which is the case in Greenwich.

The statute says that unless 10 percent of a town’s housing stock is deemed affordable, a developer willing to include a portion of guaranteed long-term affordability is exempt from town zoning regulations.

That is unless there is substantial public interest in matters of public health and safety, or other matters which the town may legally consider. 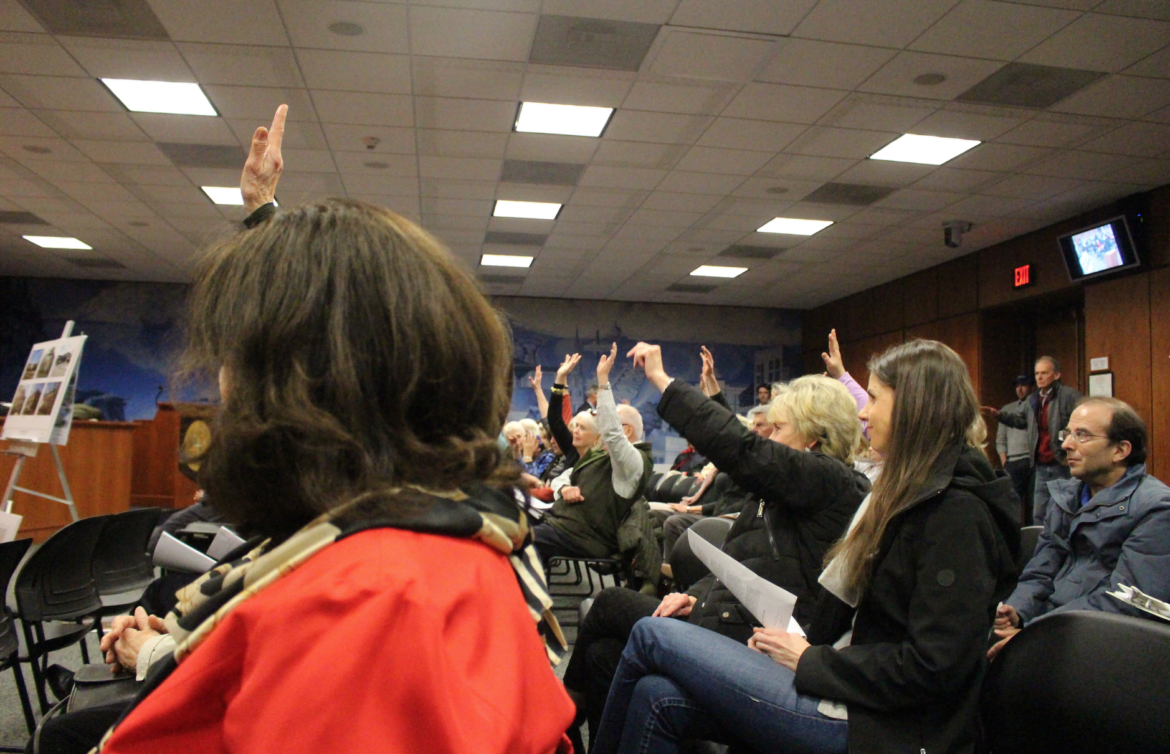 Residents raised their hands to indicate they had signed the petition against the proposed development of 143 Sound Beach Ave. March 2017

Many will groan at the memory of late night public hearings on the proposed developments of a 355-unit, 5-story “pedestal building” on the site of the  Post Road Iron Works, and a proposal for a multi-story mixed use building at 143 sound Beach Avenue. Both were submitted under the 8-30g statute.

In April, a proposal to develop a flag lot behind the Two Door Restaurant in Chickahominy with three buildings for a total of 10 one-bedroom including affordable units under 8-30g failed to carry at P&Z. Four affirmative votes were needed to approve, but there were only three. A key safety issue was the width of the driveway should a fire truck need to access the property.

The Selectmen expect to vote on the Housing Authority’s MI request at their next meeting, which is July 12. 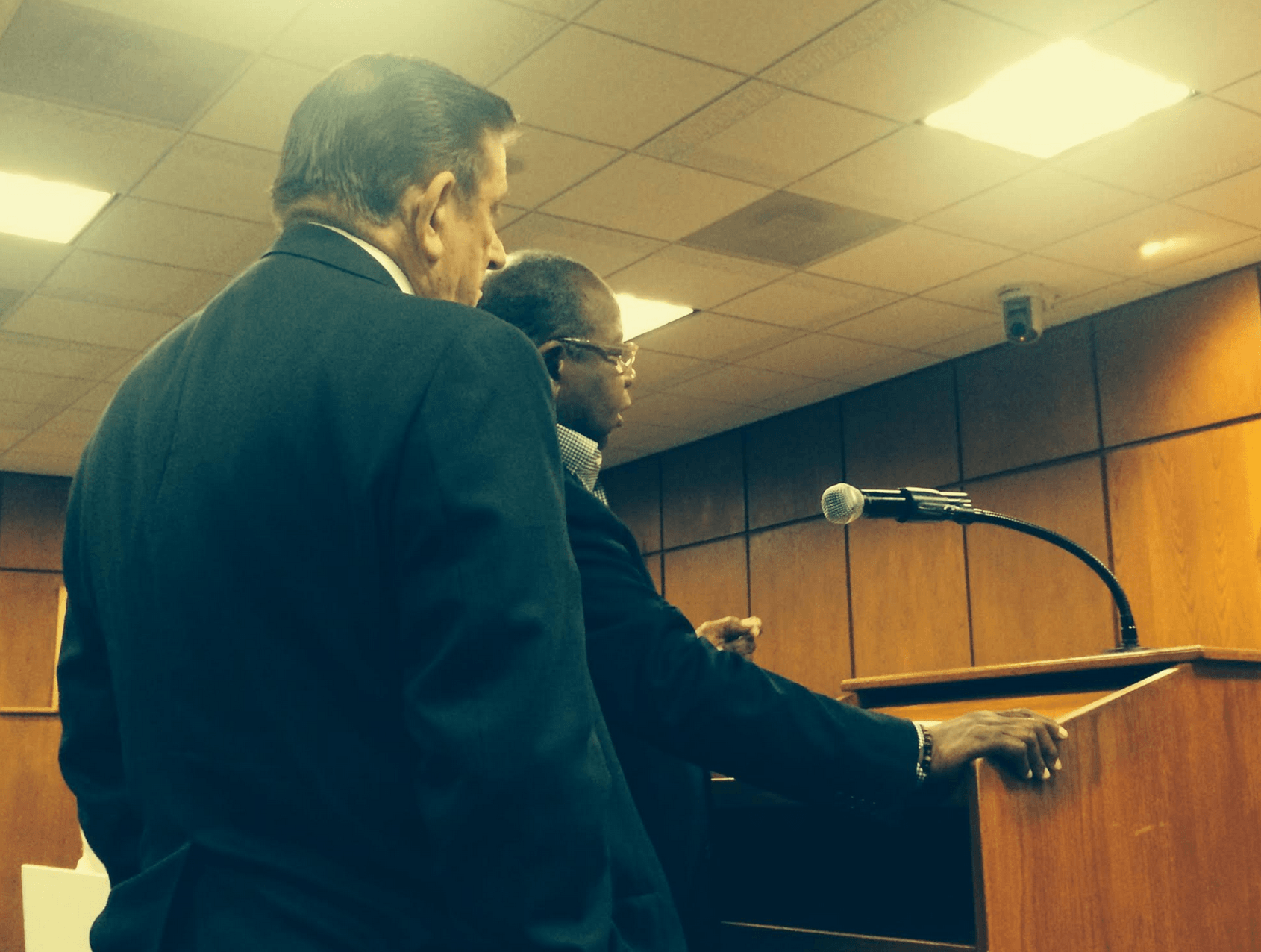