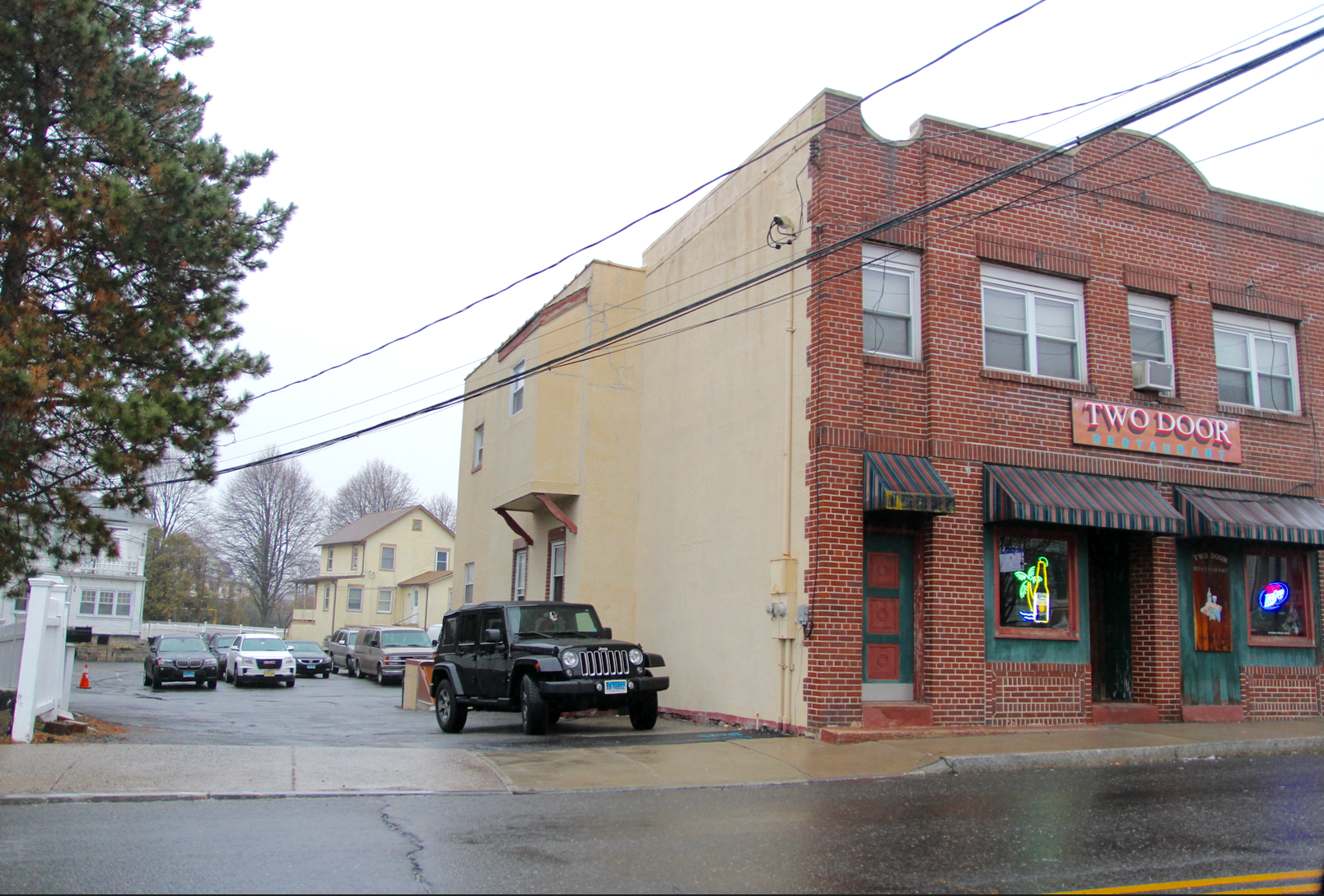 UPDATE: This application was approved at a subsequent meeting.

Original Story, April 2018: A vote on an 8-30g affordable housing application seeking approval to demolish two 2-family homes on a flag lot behind the Two Door Restaurant at 176 Hamilton Ave and replace them with three buildings for a total of 10 one-bedroom units failed to carry on Tuesday night at the Planning & Zoning meeting.

There was much discussion of the application and owners of neighboring businesses voiced concerns.

The application was a “must decide,” meaning the timeline had run out and no further extensions were available.

The final vote resulted in a moment of stunned silence.

Before the vote, chair Richard Maitland explained, “There are many things on this project that are unusual – the density exceeds our regulations… All of these things are not in compliance with our regulations. That’s because it’s under 830-g, and its goals are to create affordable housing when a town doesn’t have the proper number of units, which Greenwich does not. The theory that the 830-g has it that local zoning constrains affordable housing, so the applicant has the ability to ignore local zoning to the extent specific tests are met.”

The conditions under which the commission could fail to approve the application are for “substantial public interest in matters of public health and safety or other matters which the town may legally consider,” he said.

A motion to approve made by Margarita Alban was seconded by chair Richard Maitland.

Four affirmative votes were needed to approve, but there were only three: Ms. Alban, Mr. Maitland and Peter Levy. Voting against were Nick Macri and Andy Fox.

The applicants’ attorney Bruce Cohen said his client had engaged a firm called Hygenix Inc. who found “some non-native material on the site including fly ash, but not in a quantity that would require remediation.”

Cohen said that when construction takes place, that material would be disposed of in accordance with DEEP regulations.

Cohen said his client had  submitted a revised site plan to address issues raised at the Feb 22 hearing.

Green Space
“First of all, we’ve increased somewhat the green area by moving the buildings and increasing the landscape areas,” Cohen said.

“We’re adjacent to the Hamilton Avenue School playing field, which provides an element of green area or open space, which I know you were interested in trying to achieve.” Cohen continued. “…It’s ideal for teacher housing given it’s near the school, a church, is on the bus line and near downtown Greenwich and the railroad station.  There are shops in the vicinity. It’s the kind of development I’d hope you’d see fit to approve.”

Cohen said he hoped his client’s  application would “set the standard for applications like this in the future.” 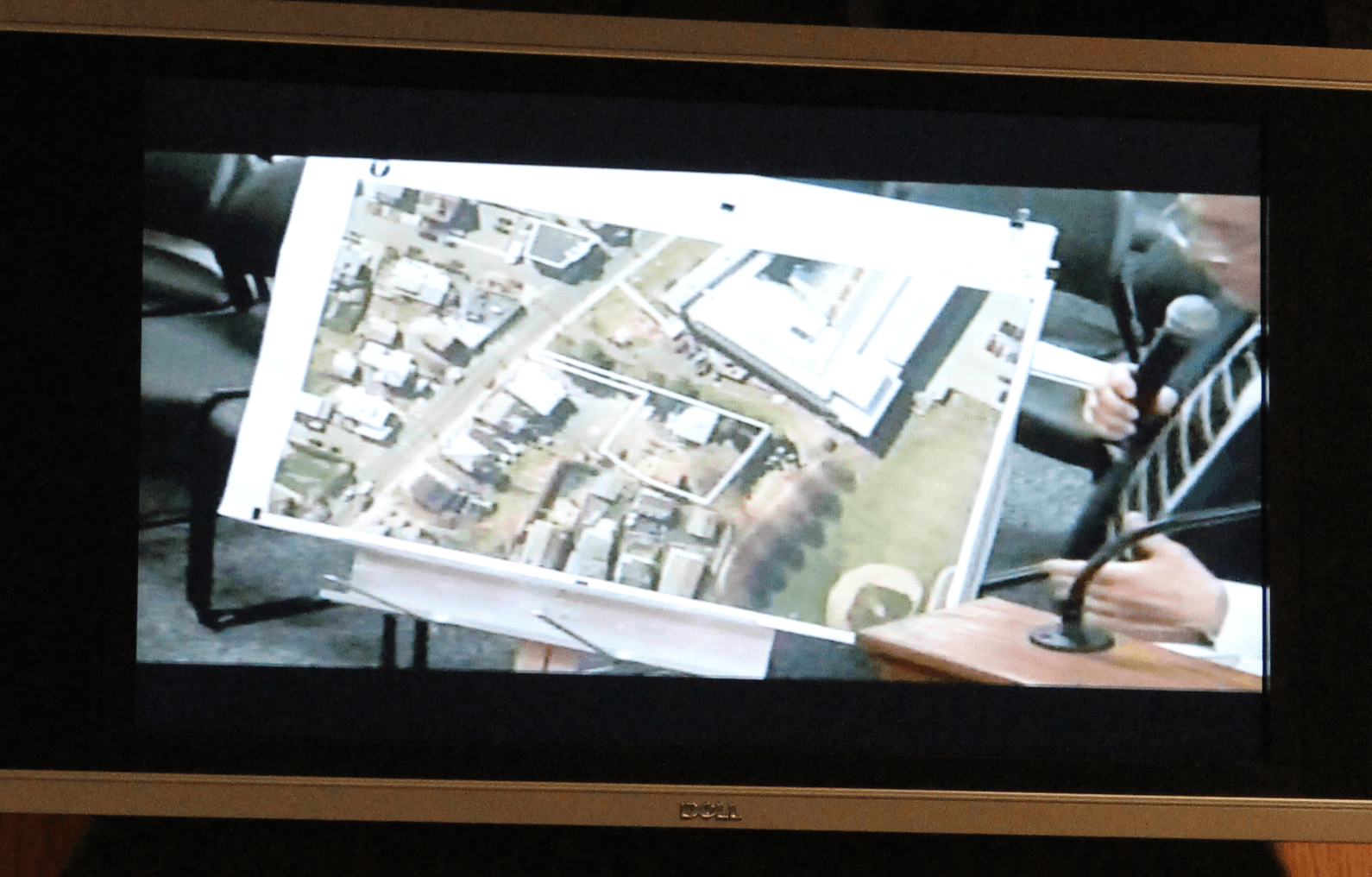 Flag lot where the proposed 830-g multi family development would be constructed behind the Two Door Restaurant. At the top right corner of photo is Hamilton Avenue school. To the right is the Ham Ave School field.

There was discussion of Mr. Cohen’s reference to adjacent playing field at Hamilton Avenue School as “green space.”

“I find that statement a little thin,” commissioner Macri said. “I take exception to that. To say there is an open space next door on my neighbor’s property. The next person comes in and says, ‘My next door neighbor has five acres and there’s open space.’ I’m not too sure if that’s something we should consider.”

“I’m not suggesting it should be a precedent,” Cohen replied. “But it’s good to have a green area, so we don’t have drainage issues.”

Emergency Vehicles Access, Easement for the Hamilton Avenue School Driveway
Another  point of contention was the commission’s concerns about the width of the driveway leading to the development, which is on a flag lot behind the Two Door Restaurant.

There was also discussion about the safety of residents and pedestrians walking down the driveway to the flag lot or the back entrance to the Two Door.

Mr. Levy suggested that the applicant, who owns the homes along Charles Street, create a sidewalk there, offering a safer alternative walking to Hamilton Avenue.

Mr. Cohen said he didn’t know if his clients would agree to that. 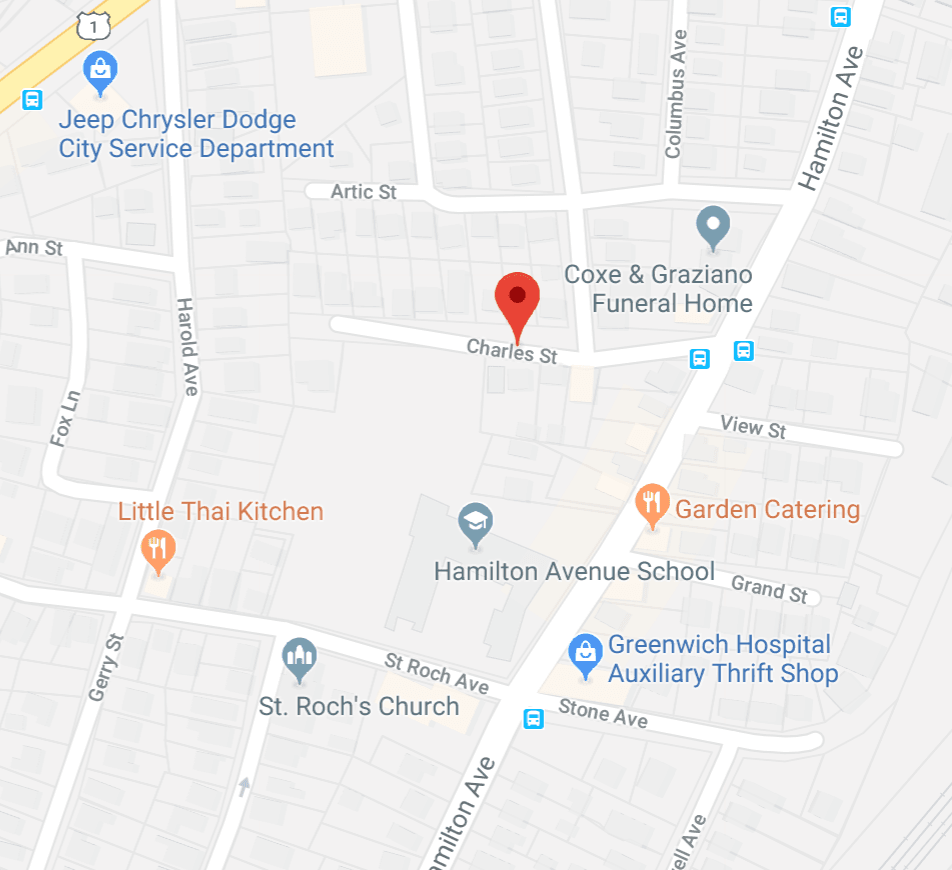 The applicant had been told at the Feb 22 meeting they needed an easement from Hamilton Avenue School in order to create the 16 foot apron at the entrance to the driveway. Mr. Cohen referred to that as a “license.”

He said that would result in good sight lines along Hamilton Avenue to the west.

Mr. Cohen said that in a meeting with Mr. Wetmore from the town legal department, he was told that license would not be a problem as it would follow precedent.

There was discussion on the width of the driveway giving access to the flag lot, which would have the 16 foot apron upon confirmation of the license agreement with the Board of Education, and a 10 ft wide driveway beyond that.

However, if the Two Door Restaurant were to put up a fence on their portion of the shared driveway, that would narrow it.

Cohen said that his client had received the blessing of the Fire Department, who confirmed that emergency vehicles would have adequate room to drive down the driveway and enough radius to turn around.

Mr. Fox said the okay by the Fire Dept didn’t reconcile with the fact that there could be a future impediment to access. He noted that the diagram showing the fire truck turning radius had only been submitted earlier in the day of the meeting.

“The diagram submitted with the fire truck doesn’t work if the restaurant puts up a fence,” Fox said. “The agreement should be put in place. Including the license agreement (with the Town for the Hamilton Avenue School easement) before I sign off. They have the right to put up a fence and then a fire truck can’t get back there.”

Mr. Macri also persisted on this topic. “What would happen if the neighbor put a fence up?”

“There is only one place a neighbor could put up a fence up, which would be along his property line,” Cohen said. In doing so, he’d cut his nose off despite his face.” 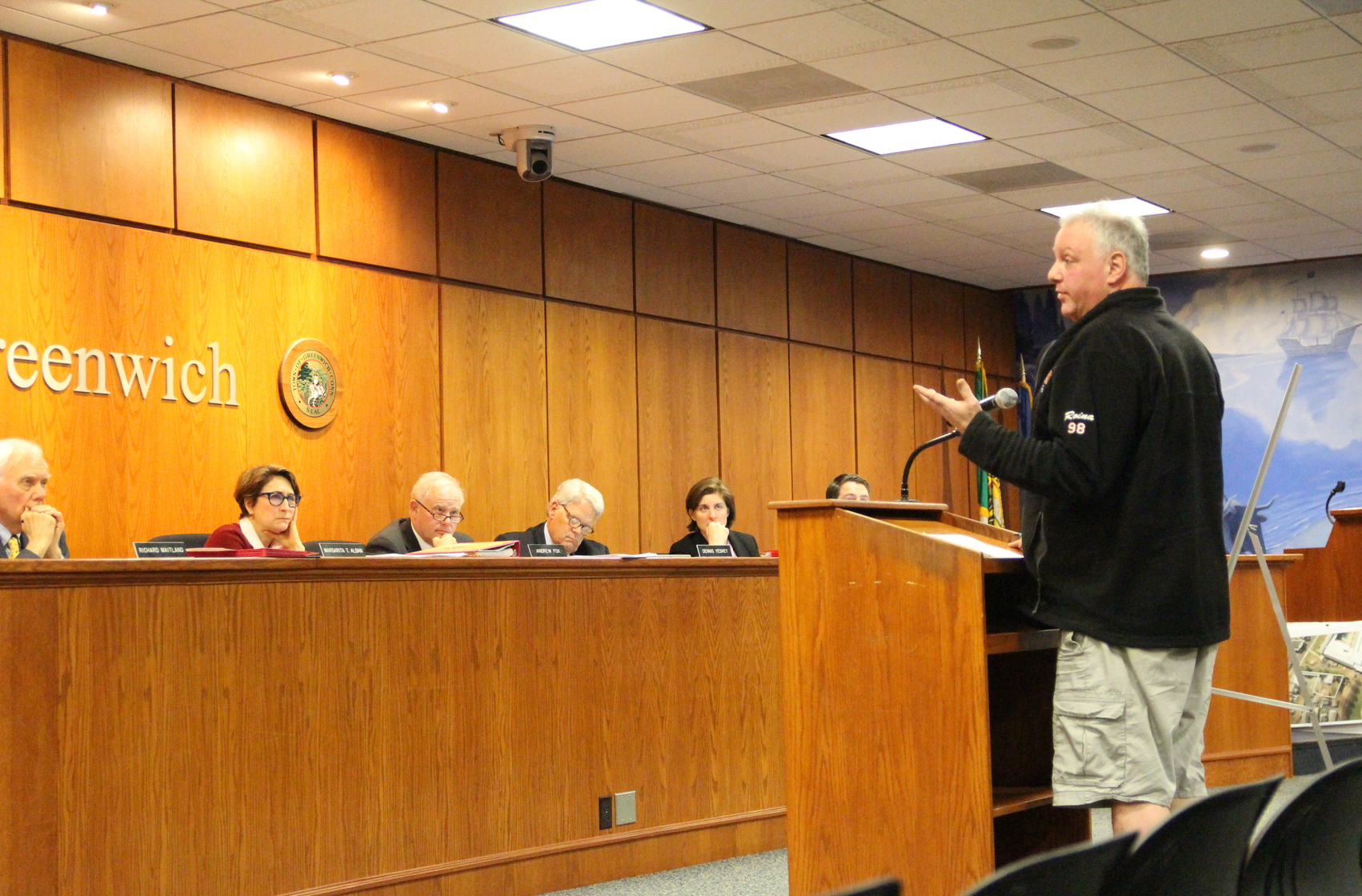 Rob Roina, owner of the Two Door Restaurant, next door to the proposed development, said, “If they have property on Charles Street, maybe they can go in there. There’s not enough room for them to get in and out (from Hamilton Ave.) April 17, 2018 Photo Leslie Yager

“You have no control over that,” Macri said, who also asked what would happen if a new owner of the Two Door wanted to tear the building down.

Mr. Cohen acknowledged that to be true. “But we’d have 10 ft of paved area which Mr. Marucci (Scott Marucci of the DPW Engineering Division) said would be sufficient. And in assuming we’re successful in getting the license agreement from the town (for Hamilton Avenue School easement) we’d have the wider apron and at least another two feet along the way.”

Cohen said that in the 60 years the Two Door has operated and the driveway has been in use, there have never been problems.

Later, during public testimony, Adam Roina circled back to the issue of the width of the driveway to the flag lot.

“I know the Fire Department stipulated if the Two Door put up a fence, they’d not have access to get in,” he said. “It’s unlikely, but I’ve seen patrons of the Two Door park there. So what’s the difference? How does fire department get access if a car is parked there and why would the Town give up land for a housing development that doesn’t seem to add much value?” 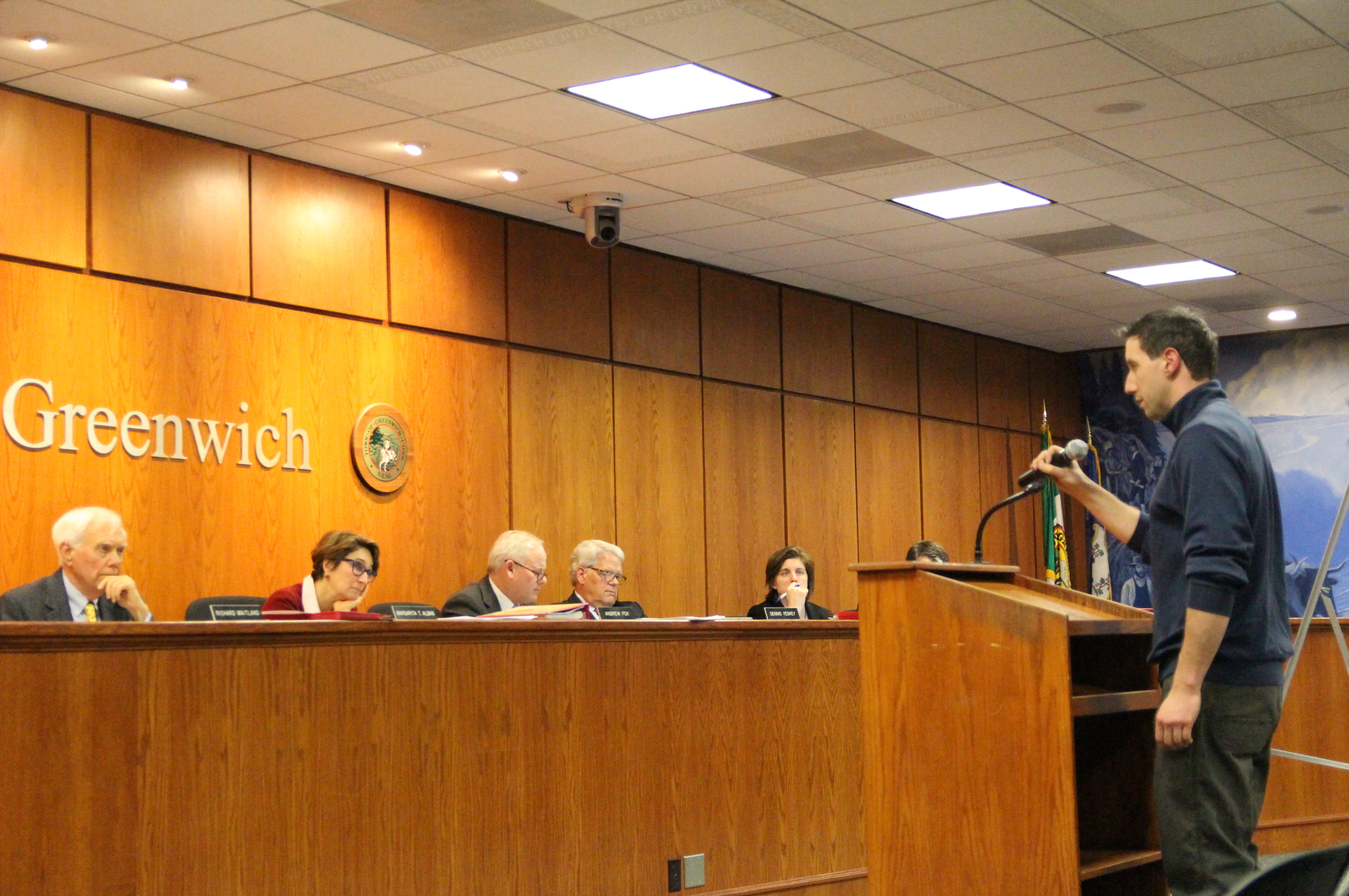 The attorneys and commissioners acknowledged that even if the Two Door owners did not put up a fence, a future owner of the building might want to tear down the building and do something different.

Any agreement the commission approved would have to be in perpetuity.

Albert Strazza, attorney for the Two door spoke for his clients.

“We understand the importance of affordability of housing, but it shouldn’t be at the cost of the long time residents and business owners,” Strazza said. “They want the commission to consider safety. The access on a flag lot is very narrow and they share it with patrons. At times of peak traffic when the restaurant is at capacity, the problem is compounded.”

“If the restaurant is at capacity I don’t see how an EMT truck could get in the back there. And pedestrian access. I don’t see how that’s been addressed. There is a lot of talk of people walking to the bus line. Where are people going to walk from Hamilton Avenue to the back? How will my clients’ patrons be able to access the back lot.  If you’ve tried to get out onto Hamilton Ave, the sight lines are very difficult. You can’t see cars coming because there are often cars parked in front of the restaurant.”

Strazza said he was also concerned about drainage, and that currently the parking lot is part asphalt and part gravel.

He also said he was concerned about disruption of his clients’ business during construction – specifically trash removal and deliveries. “How will my clients stay in business?” he asked.

Lastly, Strazza said the applicant’s traffic consultant John Canning of Kimley-Horn had said there would be 11 parking spots and one handicap spot for the 10 units, and that overflow will go onto the street.

“We believe there is enough, but if there are occasionally one or two more vehicles, there is parking available on the street,” Canning said.

Strazza said overflow parking onto Hamilton Ave would impact the five adjacent businesses. “And there is no municipal lot nearby,” he pointed out.

830-g and Affordable Housing
“I’m surprised to see the folks from the Two Door here because this application started last December and has been before this commission, and the Architectural Review Committee, and this is the first objection that I’ve heard,” Cohen said.

After P&Z chair Richard Maitland reminded everyone that the entire application failed to meet regulations, but because it was an 830-g affordable housing application, it was exempt from town regulations unless there is substantial public interest in matters of public health and safety or other matters which the town may legally consider, the commissioners took their vote.

8-30g, Affordable Housing and Development in R6 Zone
Last June the P&Z commission ruled that in R6 zones it is no longer possible to develop more than a single family or two family home.

However, in R6, multi-families with more than 2 units are possible under the 8-30g affordable housing statute.

A municipality is subject to the 830g statute if it has is less than 10% affordable housing, which is the case in Greenwich, which hovers around 5%. It is also a goal of Greenwich’s POCD to increase the town’s affordable housing inventory.

Mr. Cohen noted that there is less affordable housing in Greenwich than there were a few years ago.

“I’d like to point out the provisions of 830-g apply to Greenwich because we’ve not reached our target of affordability,” Cohen said. “Since the last census, affordable housing has dropped from 5.3% to 4.9%. So, we, the POCD, and you have all recognized the desirability and necessity of affordable housing in town. 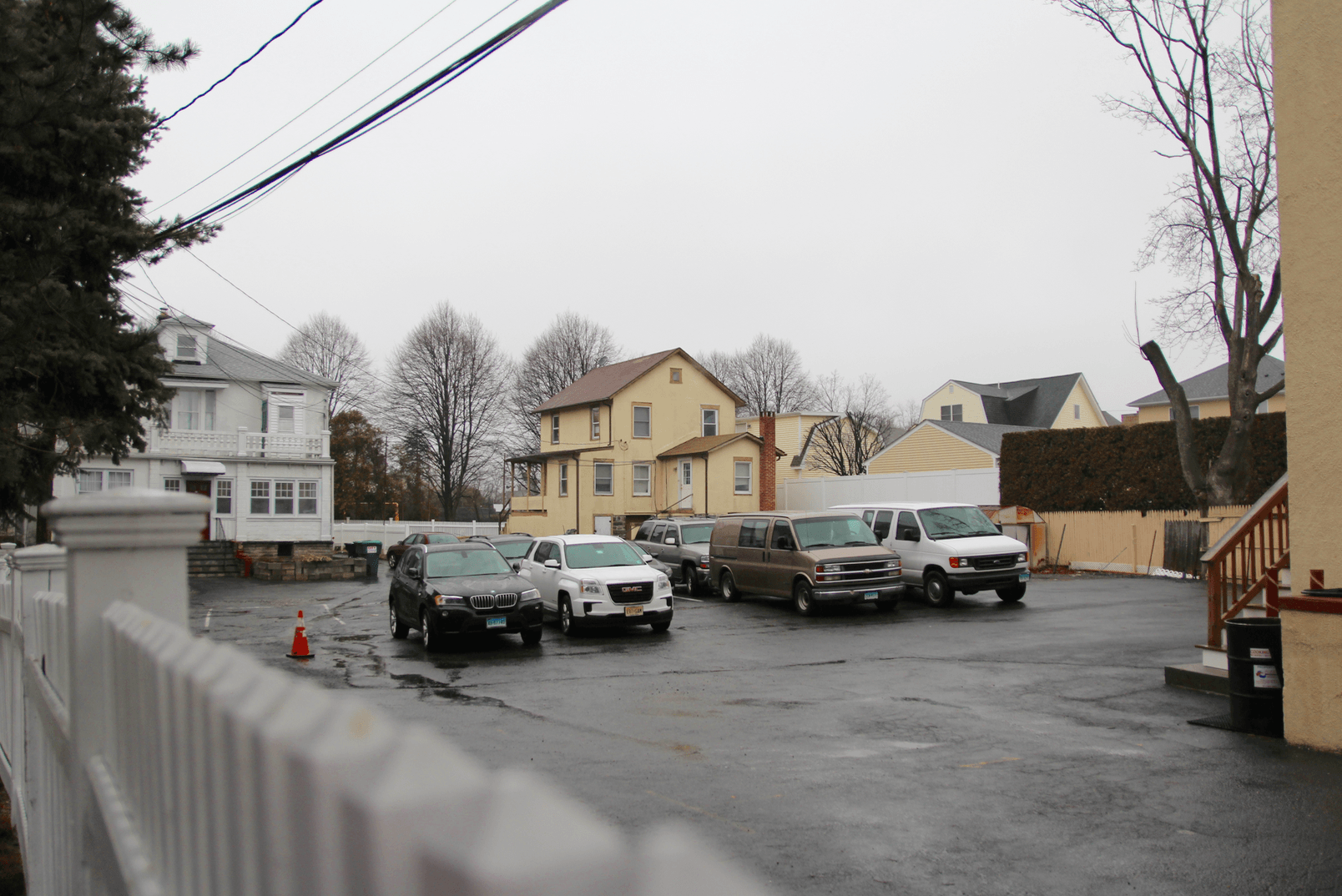