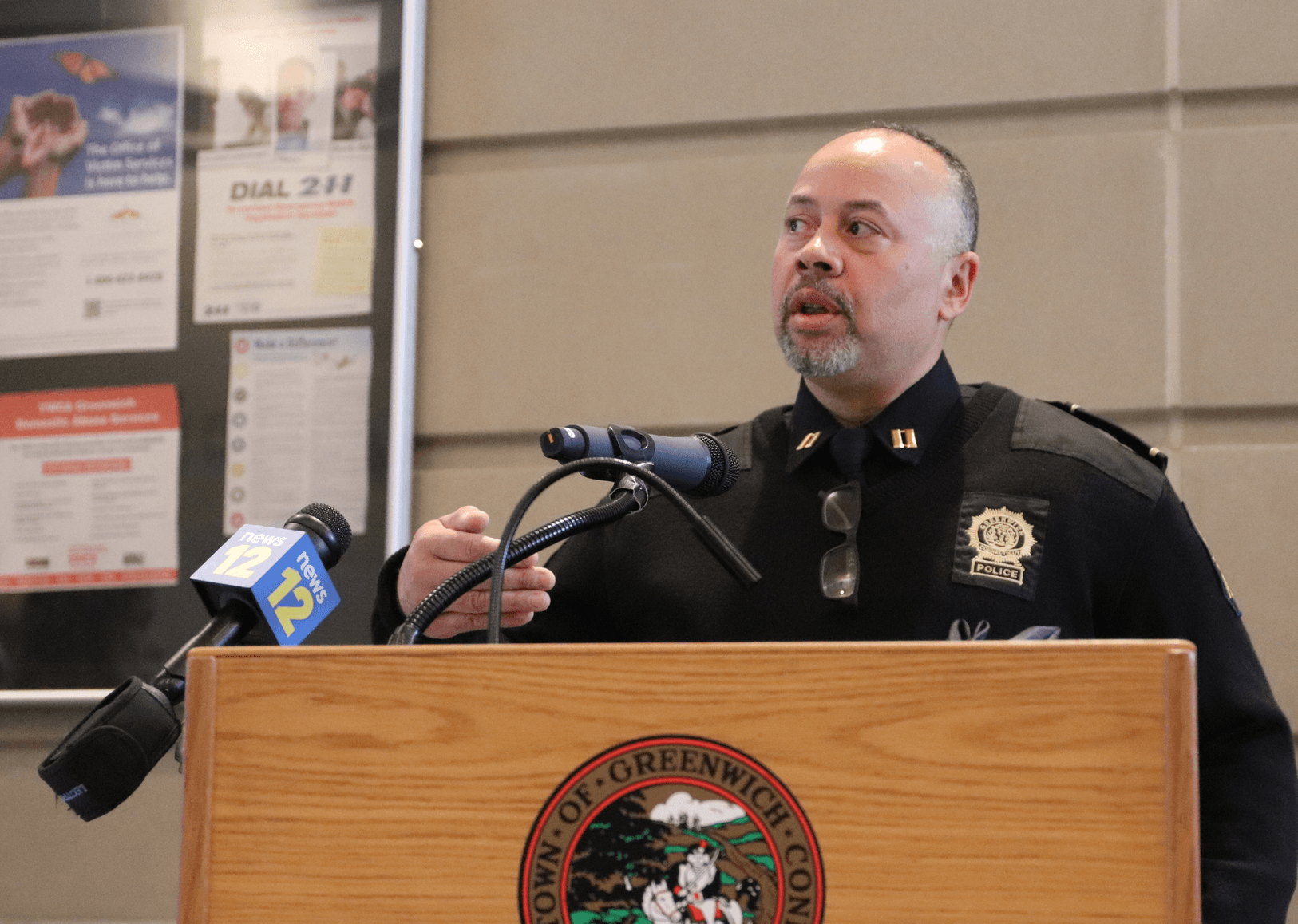 Camillo said as of Tuesday Town Hall was closed to visitors with the exception of those with an appointment for time sensitive transactions.

He said that while the Eastern and Western Greenwich Civic Centers and town playgrounds are closed, parks, beaches, paddle tennis and tennis courts remain open. “We’ll be monitoring those venues,” he said.

Having declared the state of emergency on Monday, Camillo noted he has the ability to close certain businesses in addition to town functions.

“We want people outside. We want them exercising and walking, but at a distance.” – First Selectman Fred Camillo

“We’ll be making an announcement later today about hair salons and nail salons,” he added,” he said. “We are looking closely at everything.”

Greenwich Police Chief James Heavey said in all three emergency services are experiencing a dip in calls.  “We’re using that time to protect our force and get them ready for the inevitable increase in calls,” he said.

“She is unsure if any of the 6 confirmed cases in Greenwich came through GEMS, but it’s part of what they plan for in any pandemic,” Captain Gray said. “So far the response has had no detrimental effect to their delivery of service.”

Asked when 911 is appropriate to call, Chief Heavey said if, for example, an elderly person is coughing and having difficulty breathing, they should indeed call 911.

Police will triage the call, and both GEMS and a police officer will respond.

However, he said if a person has flu-like symptoms and is not part of a a high-risk group, they should contact their personal physician. “Then, if the appropriate symptoms are there, they’ll give them a prescription so they can get an appointment at Greenwich Hospital or one of the other agencies that test for the flu or the virus,” he said. “If you’re a healthy person having some symptoms, don’t use 911 for that.”

“We end all our meetings with a reminder to try to be kind. People’s stress is going to go up. We want people to help each other out and cooperate.” – Greenwich Police Chief James Heavey

Asked for advice to residents who reside in apartment buildings or complexes including public housing, Camillo advised they practice social distancing in common areas or avoid them altogether, and of course, continuously wash hands.

Camillo said that as of Tuesday he said the State of Connecticut has 49 confirmed cases of COVID-19. Twenty of those cases are in Westport.

“Here in Greenwich, we have 6 confirmed cases,” Camillo said, adding that while practicing social distancing residents, including children out of school, should feel free to go outdoors to walk and exercise.

Camillo saaid the Fire Dept, Police Dept, Health Dept and Selectmen’s office are holding daily meetings. Also, he said he is sharing best practices with Mayors and First Selectmen from neighboring towns, including those in Westchester, NY.

Asked whether Greenwich Hospital has the number of tests it needs, Camillo said that was “a constant battle” and being done on a state by state basis.

“Governor Lamont’s concern is that a state like Connecticut, which is smaller than a state like New York, but has regions like Fairfield County and towns like Greenwich that are very close to epicenters of the outbreak – more than some rural areas of New York,” Camillo said. “The state of Connecticut is out there pushing for their share of testing kits.”

The First Selectman said Chicken Joe’s and Upper Crust Bagel are delivering food across town, and Stop & Shop is open early in the morning just for seniors age 60+ from 6:00amto 7:30am. 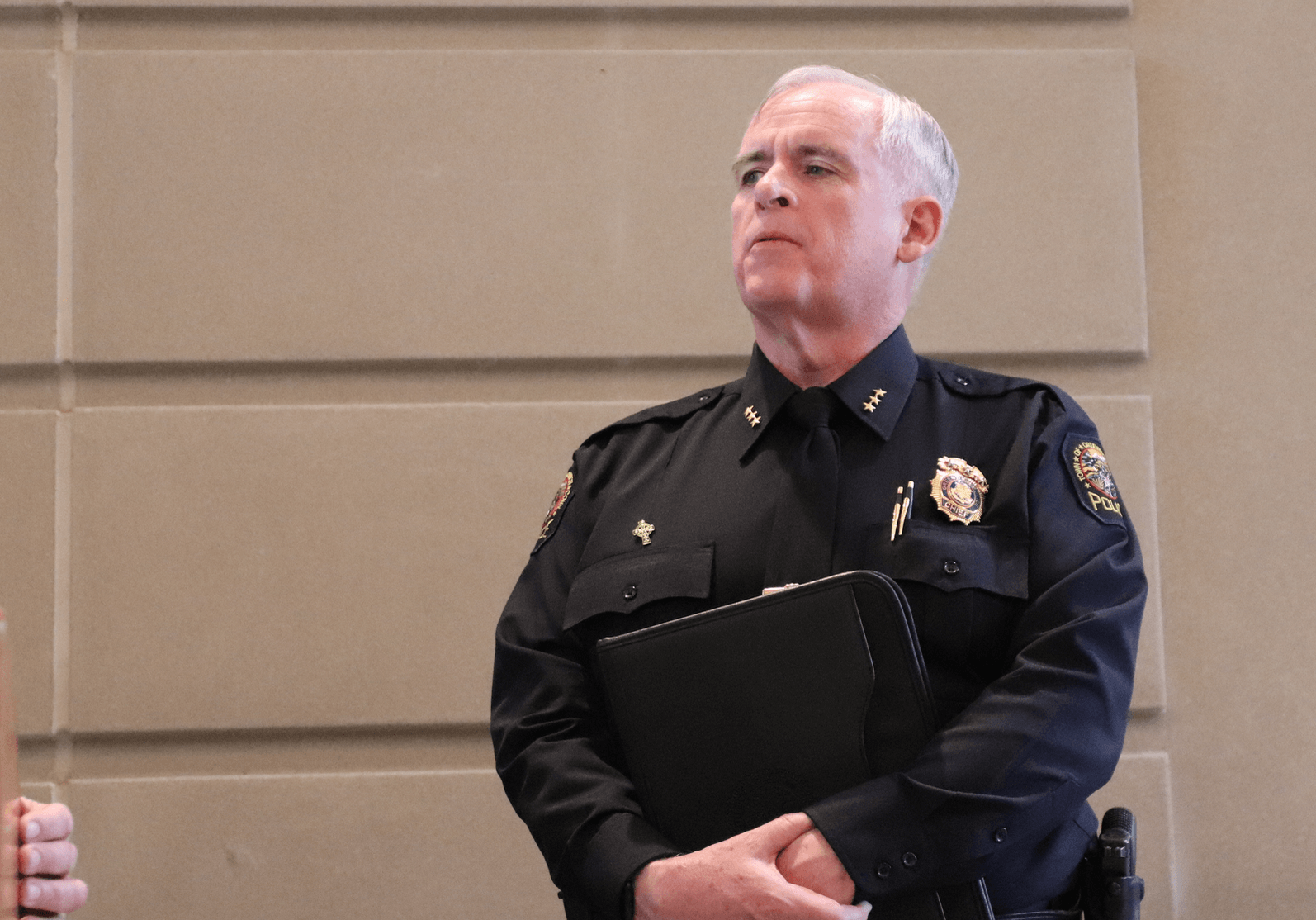 “I’d urge residents to shop and buy local, at a distance,” Camillo said. “Order takeouts and whatever you can do. Buy a gift certificate to be used at a later date to be used at these businesses.”

Chief Heavey said since Monday night at 8:00pm when restaurants and bars were ordered closed except for those able to offer takeout and delivery, compliance has not been a problem.

He said the Knights of Columbus are volunteering to help seniors with their shopping.

Joanna Lipson from Greenwich Health Dept commented on the six cases of COVID-19 in Greenwich, saying just one of them is in the hospital.

“Those six individuals isolated themselves right away, before they got tested so they did not expose their family members,” she said, adding that the Health Dept is monitoring daily.

Fire Dept Chief Peter Siecienski, who took a sanitizing wipe to the microphone at the podium before speaking, said to minimize exposure during responses the public are not allowed inside fire stations, and that dispatchers ask a specific set of questions that stem from the virus.

Camillo advised residents to not to believe everything they read on the internet, and not to forward information that is not confirmed.

“A lot of that can end up hurting people and place them in harm’s way,” he said.

Chief Heavy said police are trying to provide some normalcy to residents. To that end, in honor of St Patrick’s day, earlier in the morning, about 15 officers of Irish descent raised the Irish flag outside town hall while practicing social distancing and hand washing.

Heavey said he expects people to be under stress during the pandemic but urged residents to help each other out, especially the elderly and people with limited abilities, as long as they can help out while exercising social distancing.