While last year’s December meeting focused on Narcan, and Greenwich Police Chief Heavey was a featured speaker, Monday’s meeting featured frank discussion on Opioid addiction and trends in both illicit and prescription medications.

US Congressman Jim Himes (D) said that as the parent of two teenagers, his daughters see it. “It hits close to home,” he said. “The community is being ravaged.”

State Senator Scott Frantz (R) said that ironically, a Stamford-based company makes opioids, though he did not mention the business by name. Frantz pointed out that as many die from opioid abuse as from car accidents.  “There may be a class action law suit against one of these manufacturers,” he said. “I am optimistic and people are starting to pay attention.”

Stamford Mayor David Martin, who was on his way to an emergency preparedness exercise in an abandoned building, likened the dangers of drugs to terrorists bullets.

Fentanyl Being Used by Heroin Dealers to Boost Yield

Lawlor said the New Jersey/New York area for drug trafficking is the supply source for Connecticut. “Whatever is going on there trickles down into Connecticut,” he said, adding that the newest trend is lacing heroin with Fentanyl, which is a powerful synthetic opiate analgesic similar to but more potent than morphine. Fentanyl is typically used to treat patients with severe pain, or to manage pain after surgery. 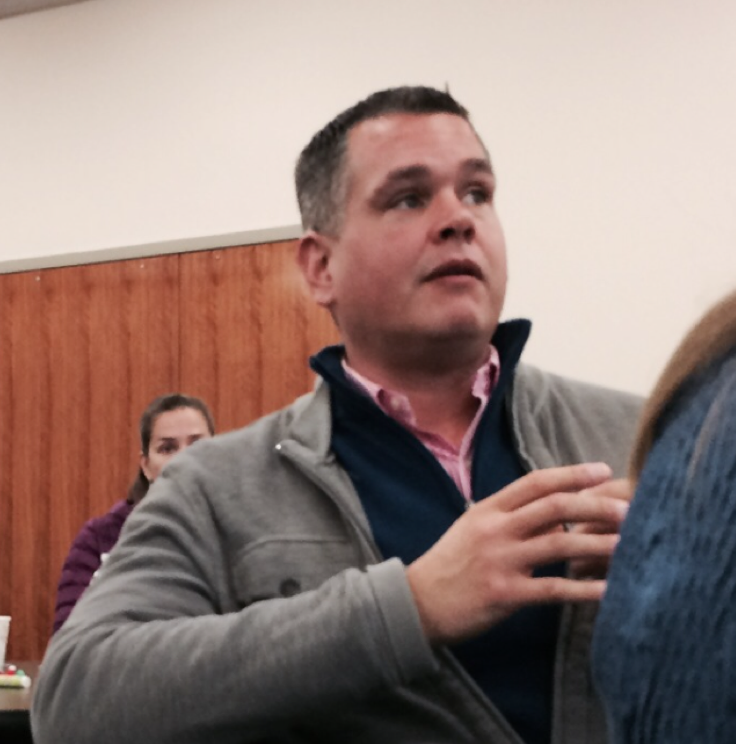 “New Jersey has seen a 651% increase in Fentanyl cases in the last year,” Lawlor said, adding that drug gangs are turning to Fentanyl because it is profitable.

“Drug gangs are selling straight Fentanyl or lacing heroin with Fentanyl, and it’s coming this way,” he warned.

Lawlor said, adding that with that type of markup, the scheme is attractive to drug dealers. The powder form is illegal but available via the internet and is being used pressed into pills and sold as OxyContin. “They’re not even telling the kids what it is,” he said, adding that most kids are crushing it up and snorting it.

“You can buy a kilo of Fentanyl online from China for $20,000 online and make $2,000,000 profit.” – Bob Lawlor, of the High Intensity Drug Trafficking Area Office of National Drug Control Policy.

Lawlor explained that most users anticipate a certain amount of heroin every day, and that when a drug dealer  boosts lower quality heroin by adding Fentanyl to increase their yield, it contributes to the likelihood of an overdose. In fact, he said Fentanyl deaths are on the rise

“New Jersey is having a major problem with Fentanyl pressed into pills disguised as OxyContin,” Lawlor said. “Kids are thinking they’re buying OxyContin and it’s pure Fentanyl. We get 90% of our heroin from New Jersey. They’re even seeing an increase of meth cases in New Jersey.”

Lawlor said he ‘d heard that meth was on its way to Connecticut, but never believed it until the last 18 months.

Stephanie Paulmeno, who stared her career as a pediatric nurse, said she sympathized with anyone who has had the misfortune of watching a baby born addicted. “If you’ve seen the screaming, shaking and crying, you know what a problem it is.”

Dr. Jennifer Bragg, who specializes in Neonatology, said the incidents of babies born dependent on both prescription pain killers and illicit drugs are on the rise. She said the trend takes both a physical and financial toll. Dr. Bragg said the average cost for a baby born drug-dependent is $66,000, whereas a baby born with no medical issues costs on average $3,500.

Dr. Bragg said the newborn babies born drug dependent are treated with morphine and methadone, agreeing with Paulmeno that the babies really suffer. “You’ll see those babies being carried around all day long by nurses because they just won’t stop crying,” she said.

“We can safely send the baby home with the mother,” she said, adding that the hospital works with DCF.

The group discussed requiring parental consent for Opioid prescriptions for pain relief for children during what Darien First Selectman Jayme Stevenson called “the gap years,” referring to age 18-25 when young people are still on their parents health insurance but are often away at college. Stevenson said that as a mother of five children, she had been to too many funerals.

Stevenson said a parental consent law would be helpful, “Until we can get to the root cause why young people are looking to self-medicate to avoid whatever the pressures they experience in their lives. This cuts across all demographics.”

Stevenson urged legislators to do whatever possible to preserve a mental health safety net. 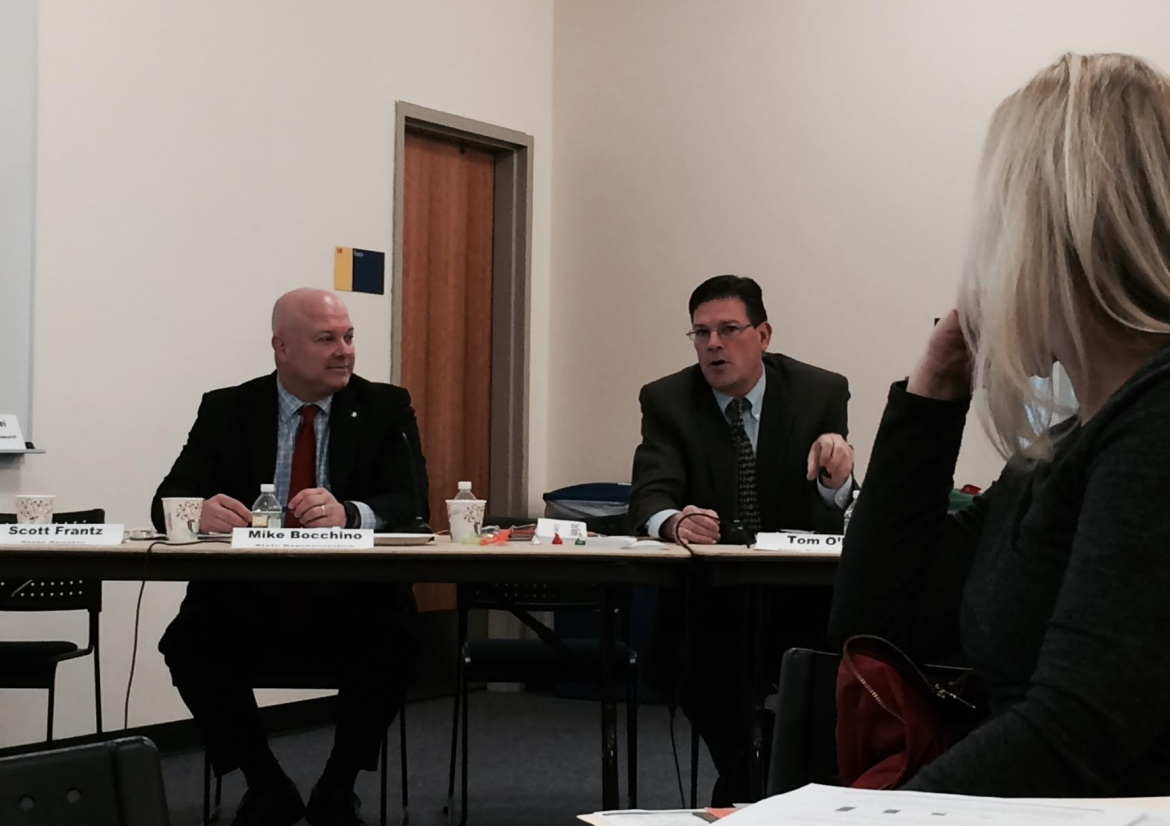 State Rep. Mike Bocchino, from Greenwich, said he’s recently spoken to high school students, and described them as unaware of the dangers of Opioid addiction and abuse.

Bocchino said he would not only embrace the idea of parental consent requirements, but endorsed the idea of teens serving their required community service hours in organizations that treat addicts.

Bocchino was also enthusiastic about changing the packaging of pain pills, and moving away from pill bottles to blister packs, which make it easier to keep track of the number of pills.

Other potential legislation discussed wold address the problem of pain medication vanishing from residential medicine cabinets. Requirements for safe storage and disposal could go a long way to preventing theft of pain medications which have a high street value.

Stephanie Paulmeno, of Communities 4 Action, said unfortunately there are incentives to facilities to issue strong pain medications. “There are penalties to facilities if they don’t keep patients’ pain under control,” she said. “In our society, people aren’t expected to endure pain. In hospitals one of the requirements is to keep patients pain free.”

Amy Badini, parent and chair of Chair of the Regional Youth Network, said that all too often doctors will prescribe 30 pain pills to a young person after their wisdom teeth are removed.

“All the kids know when someone has had their wisdom teeth out. It’s a big day at the high school,” she warned, adding that a parental consent requirement would likely come a warning on paper of the dangers of dependency and addiction, and provide something of a red flag. 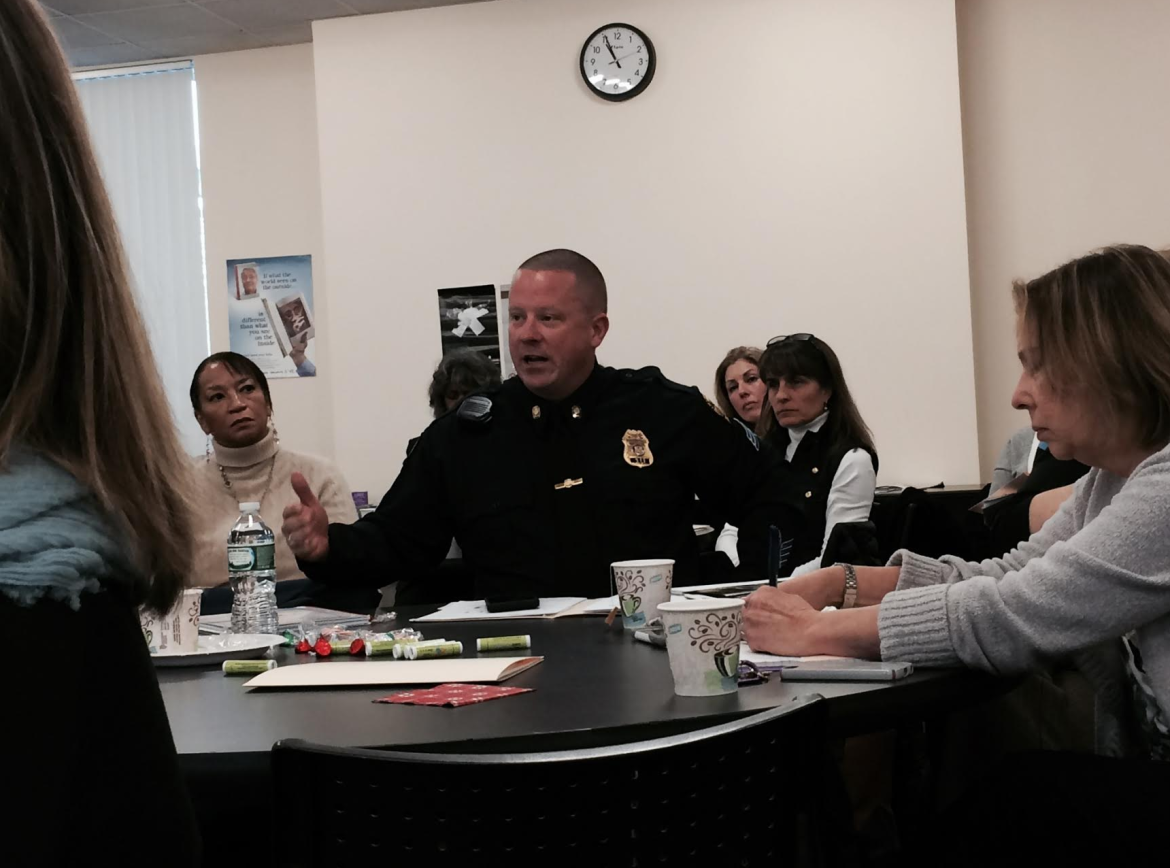 Sergeant Tim Hilderbrand said that in Greenwich said that School Resource Officers are critical in reducing problems with drugs and bullying in schools. “SRO’s are very valuable. Now we’re trying to get cops into the middle schools,” he said.

On the topic of drugs in schools, State Rep. Tom O’Dea (R) from New Canaan, said he is alarmed by marijuana despite changes in the law to decriminalize it in certain instances. O’Dea pointed out that few kids go from drinking beer straight to heroin.

On the topic of drug sniffing dogs in public schools, he said he advocates bringing dogs into high school to walk along school lockers in the evening. “Any kid who brings drugs to school is stupid,” he said. “It’s an issue of access.”

Heroin in Greenwich? The Elephant in the Room