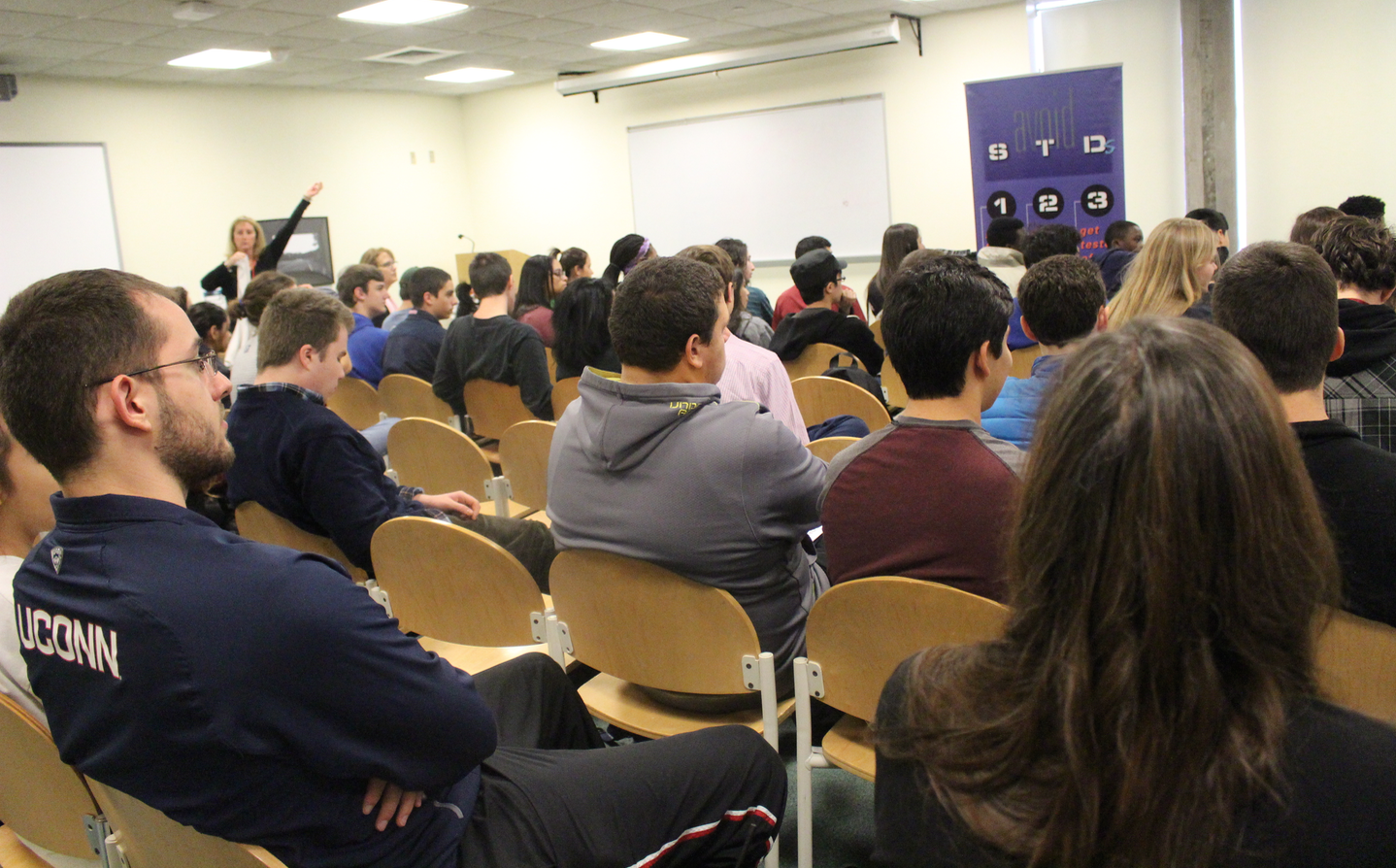 Actors from  Stop AIDS Mobile Theater, performed at Greenwich High School on Tuesday, educating students through a series of skits. The performance, funded by the CT Dept. of Public Health and Concerned Citizens for Humanity, was attended by teens from GHS and the GHS Alternative High School.

The performers, Maggie Skomal and Tony Republicano were introduced by Outreach Club co-presidents Charlotte Hacker and Rosanna Neri. The visit was also significant because December 1 is World AIDS Day. 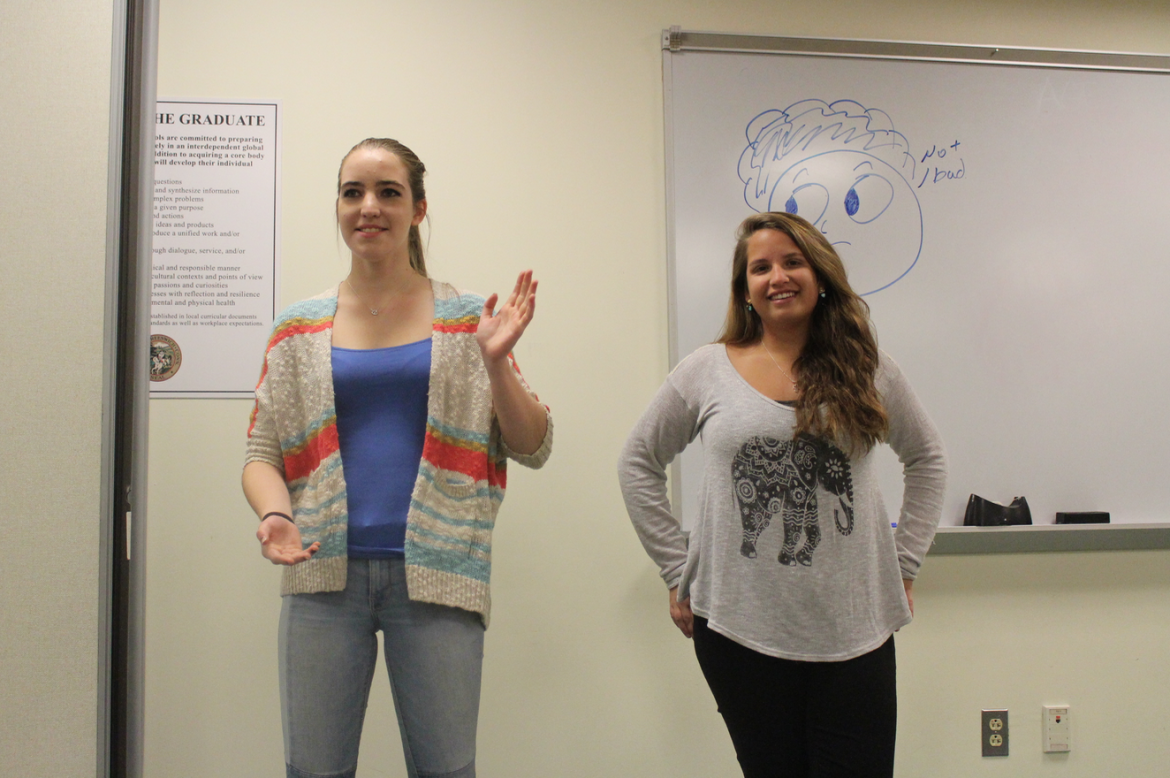 • Needles: Needle Sharing for Steroid Use or Drugs Like Heroin, Piercings or Tattoos
The duo said so much of the conversation about AIDS has stopped, but in Connecticut the numbers of HIV are increasing. They reviewed HIV, the virus that causes AIDS, sexually transmitted diseases (STDs), and sexual health.

Maggie said HIV is a very easy virus to avoid getting, as there are only three ways to get and spread it. 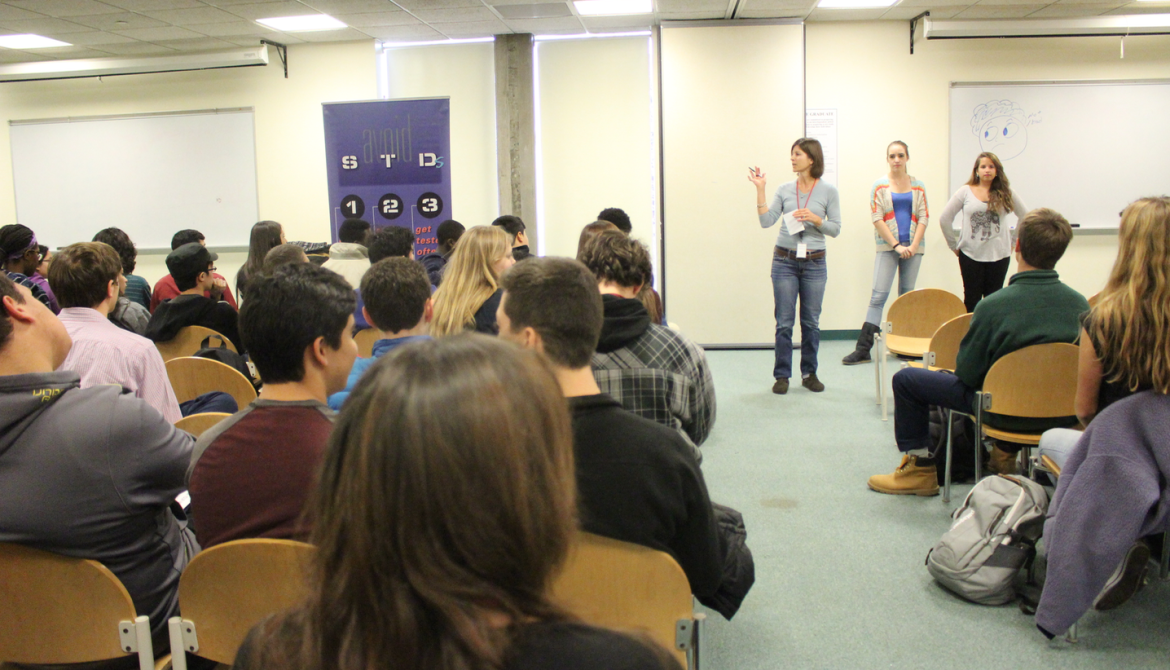 Sharing a needle for piercing an ear, nose, lip or eyebrow, for example, can also transmit the virus. Third, getting a tattoo from an unlicensed tattoo parlor is risky. There are a lot of unlicensed and unregistered tattoo shops, which means there is no guarantee of clean needles or ink.

“We were just at a school recently where nine students were going to get tested for Hepatitis C and HIV because they were under age and had gone to an unlicensed tattoo parlor,” said Skomal, adding the students  weren’t sure the tattoo artist had used a clean needle and clean ink. 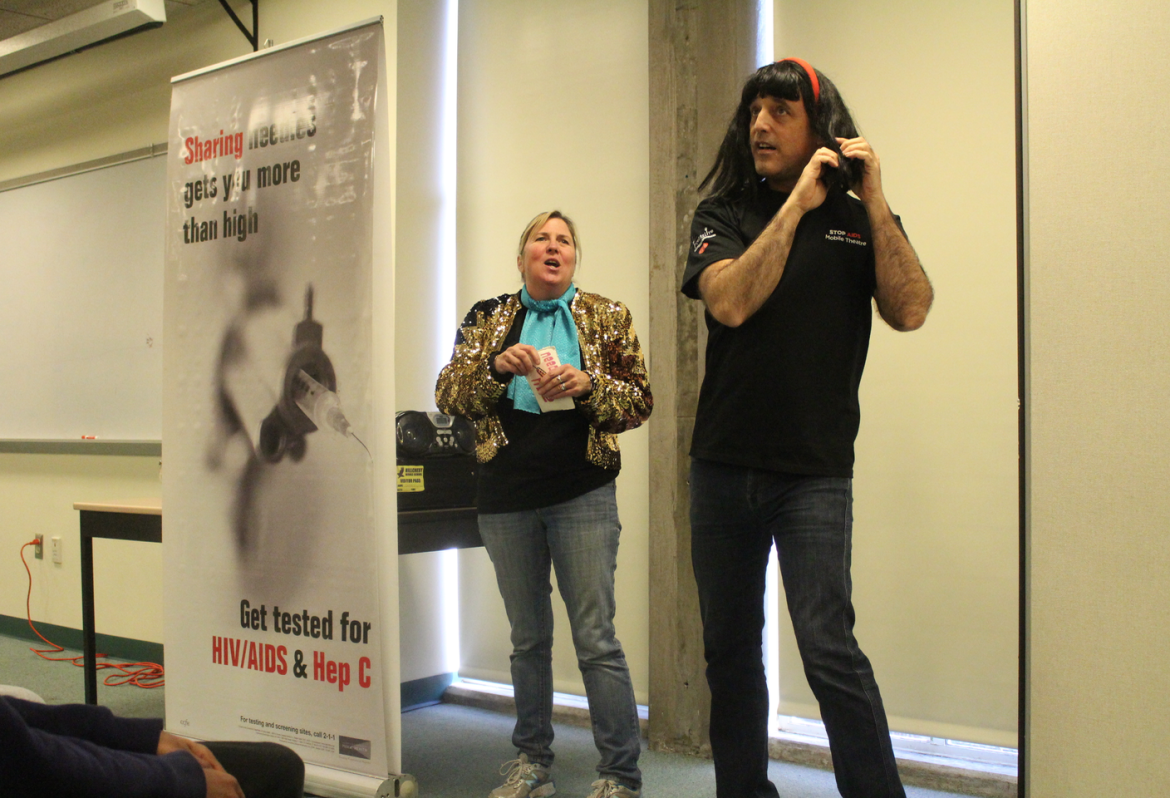 “There’s blood – you’re piercing the skin. If that blood is infected with HIV or Hep C, and then it gets in the ink and the ink gets picked up and used on someone else. The person gets not only the ink but the virus as well.”

• Childbirth
The third way HIV can be transmitted is from a mother to baby. Skomal said it’s possible to reduce the chance of transmission to 0% is by working with a doctor and medications/treatments. It can happen when the baby is inside the womb, through natural delivery or through breast feeding.

Other reminders included not sharing razors or toothbrushes. Also people who snort drugs up the nose and share their paraphernalia can transmit the virus if there is a nosebleed. But mostly unprotected sex and sharing of needles.

Sexually transmitted Diseases
Skomal said that one out of every three people will get a sexually transmitted disease. Everyone should get tested. Unlike Latex, all natural and Lambskin condoms have tiny holes in them that can let the HIV virus through.

Bacterial Transmitted Diseases (Gonorrhea and Chlamydia) can be cured with medication.  HIV, Herpes and HPV are all viral diseases that can be treated, but not cured.

Needle Drug Use
Skomal said a growing problem in Connecticut is needle drug use by people who take opiates – pain medication in the form of prescription drugs. When the pain medications cannot be accessed, more young people are finding that intervenous needle drugs are cheaper and easier to obtain.

“We are seeing a rise in young people experimenting with needle drug use,” Skomal said, adding that sharing needles brings the risk of transmitting blood born diseases. 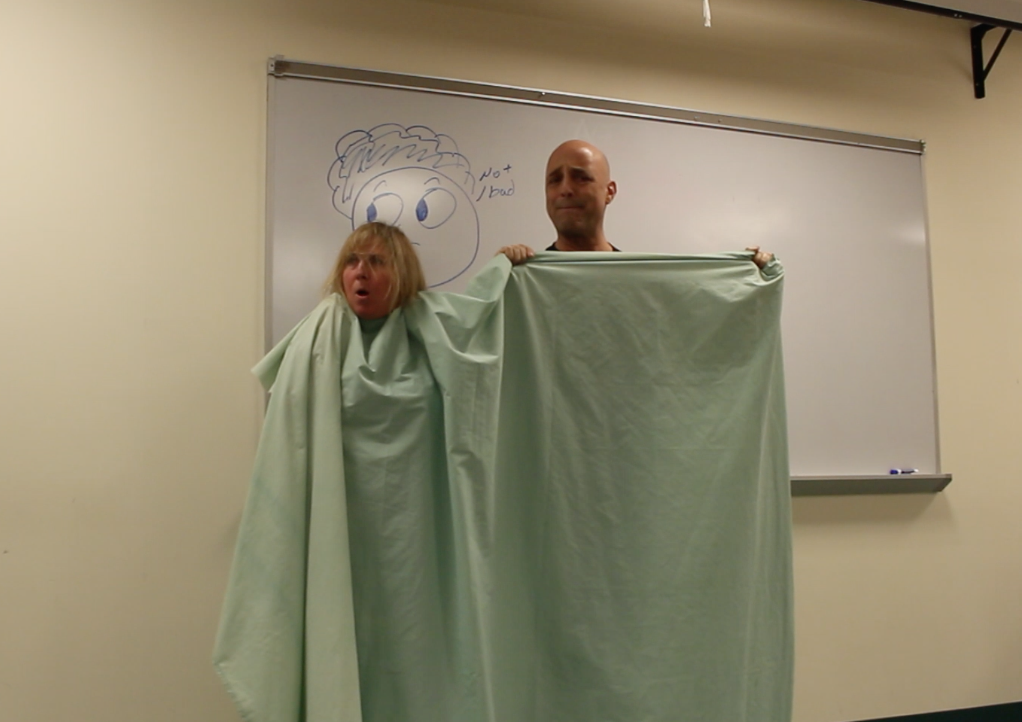 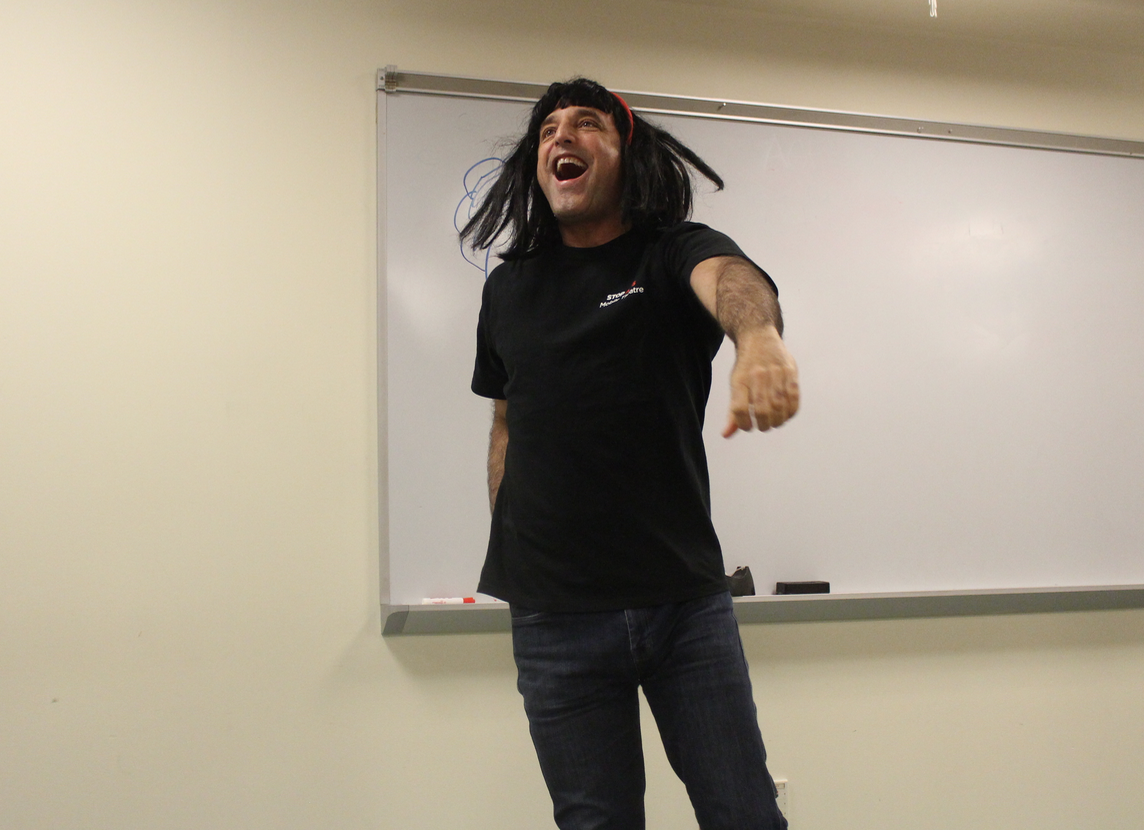 Tony performed a skit as Tracey the cheerleader who tried needle drugs just once and died. “You landed on O.D. — overdose. Your body couldn’t handle the drugs. You’re dead. Poor Tracey, her little life is O.V.E.R.,” Skomal said. The only way to win this game is never to play it. Credit: Leslie Yager

What GHS Students Gladly Line up For? Healing Touch Volunteers from Greenwich Hospital