UPDATE: At the June 28 Zoning Board of Appeals meeting, there were only ZBA 4 members present out of 5. Applicants on the agenda were given the option to return at a future meeting where all 5 ZBA members would be present. The applicants seeking to develop a 19-unit multi-family project at Milbank and Havemeyer chose to wait to a future meeting. About a half dozen neighbors who had turned out to oppose the development left town hall disappointed.

Original story: On June 28 the Zoning Board of Appeals will hear from developers who seek a variance to maximize FAR for a condo project.

The applicant is seeking to merge the six existing separate lots into one lot to construct a permitted multi-family dwelling (The applicant grandfathered in before recent changes to the R-6 zone prohibiting more than two-family residences.)

The variance pivots on the inclusion of  a parcel of land between Milbank and Locust Street, which dips down low and will not be built on by the developers. The inclusion of the parcel which may collect water in heavy rain, could potentially add FAR to the proposed condo development. 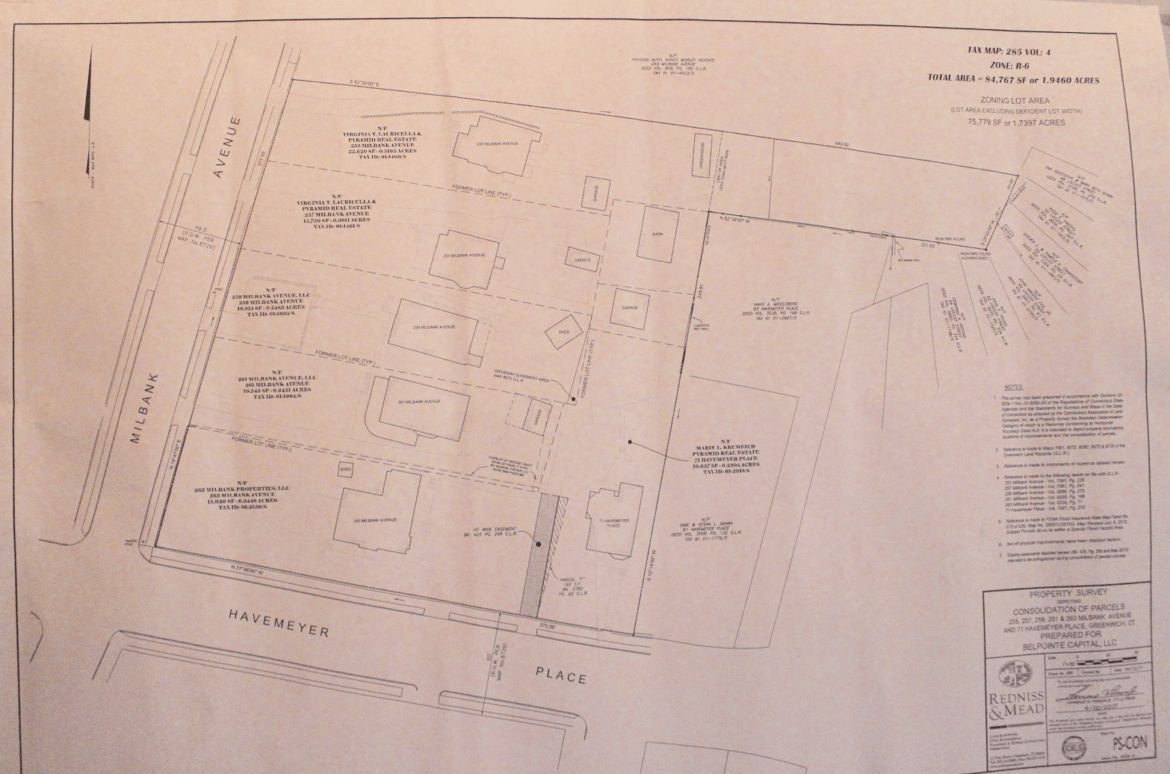 Six lots on Milbank and Havemeyer will be combined by developers into one lot. 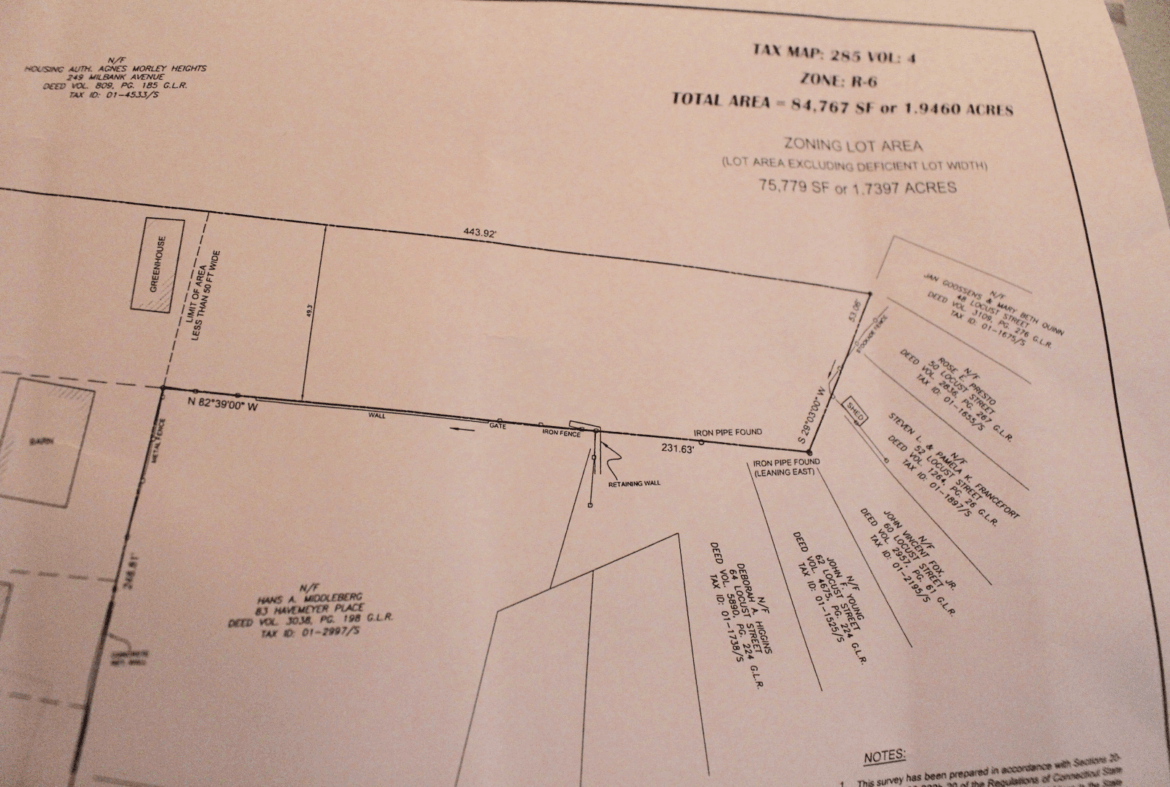 Six lots on Milbank and Havemeyer will be combined if condo developers have their way. They seek a variance to have a finger of land (top right corner) be exempt from the minimum 50 ft width, meaning they can add to that FAR on their development site.

The regs require that parcel to be 50′ wide to count toward the FAR of the condo project, but it is 49.3 ft wide.

Part of the application includes an elimination of an existing easement of access over one parcel to another (driveway at 71 Havemeyer) and that would factor into calculation of FAR.

This will all be ironed out at the Wednesday ZBA meeting.

In 2014, the P&Z commission had concerns about the “canyon effect” being created along Milbank.

P&Z commissioner Margarita Alban requested clarification about how the proposed development conforms to height limits for the proposed buildings. “It’s getting this canyon effect,” Alban said of her concern for development along Milbank Ave. 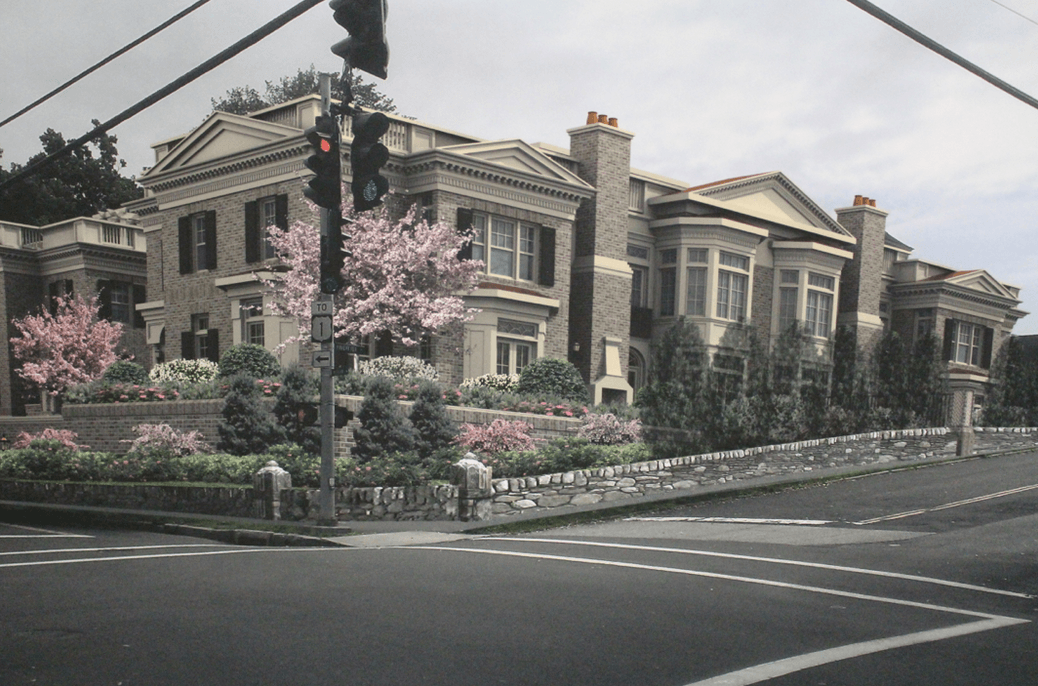 This was the rendering of proposed condos presented to Greenwich in 2014, back when only three homes were to be demolished.

That was then. Today the applicant seeks to demolish:

255 Milbank, owned by Virginia Lauricella et all of Pyramid Real Estate (built in 1910) 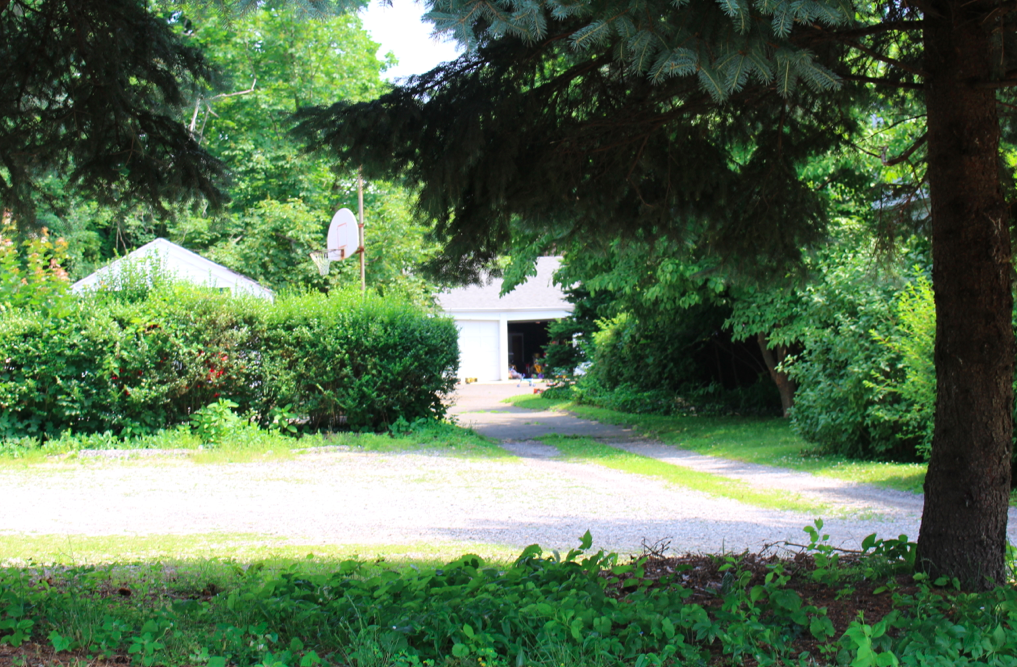 Back in 2014, there was discussion of a house at 71 Havemeyer Place which does not have driveway. According to the deed, the property has a “right of way,” which is an easement granting a 10-foot right of way to a neighbor to access their garage. Attorney John Tesei described it as, “a classic neighbor to neighbor use of a driveway for purpose to getting to a garage. It is not a street,” he added.

Back in Sept 3, 2014 Architectural Review Committee meeting, Tracey Brown, who was on ARC at the time, critiqued the applicant’s rendering of the proposed condos.

Architect Rudy Ridberg presented his plans for the development they were calling “The Charleston on Milbank Ave.”

Ridberg said the units, which he called “flats,” would be roughly 2,500 sq ft a piece and each resident will have their own storage room underground, along with two parking spots, recycling, garbage and elevators, all of which will be hidden below grade. 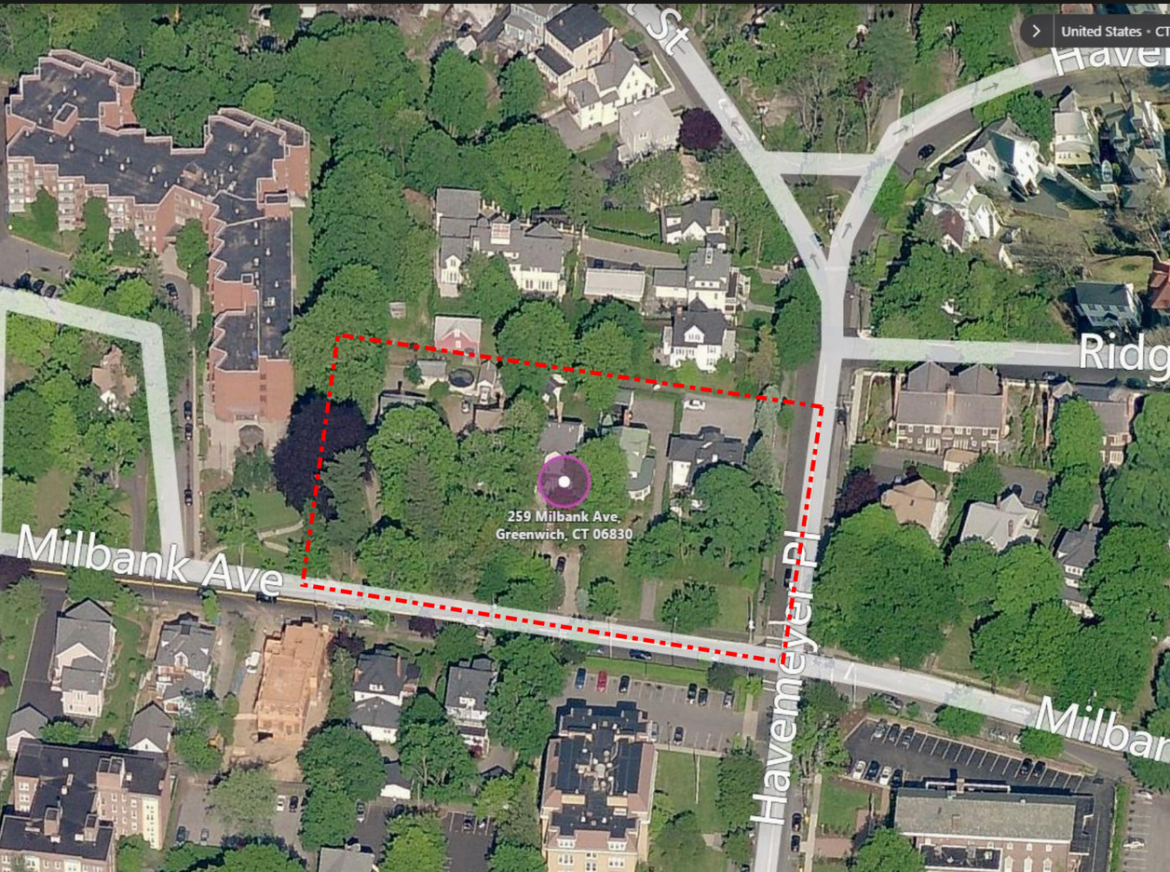 He said owners would have key access off the elevators and each come in from different levels. Ridberg described the floor plan of a ground floor unit, all of which are identical and include three bedrooms including a master suite, an open great room with dining area and fireplace, plus kitchen/breakfast area and door to outside patio with fireplace.

The first floor units will include patios. The upper floor residents will have stair access to a rooftops.

The east side of Milbank would feature a steep rise, and the plans were for underground parking built into the hill.

Though tenants and owners would have elevators from underground parking spaces — two per unit — the eight units will feature single floor living, each with a private outdoor space large enough to accommodate a fireplace or, possibly, a spa, similar to the development at the site of the former Manero’s restaurant.