US Senators from Connecticut Chris Murphy and Richard Blumenthal held a discussion on guns at Greenwich Town Hall on Friday afternoon.

Despite the Nor’Easter that felled trees and kept emergency services personnel busy all day, residents turnout in force and people were turned away when the meeting room filled to capacity. 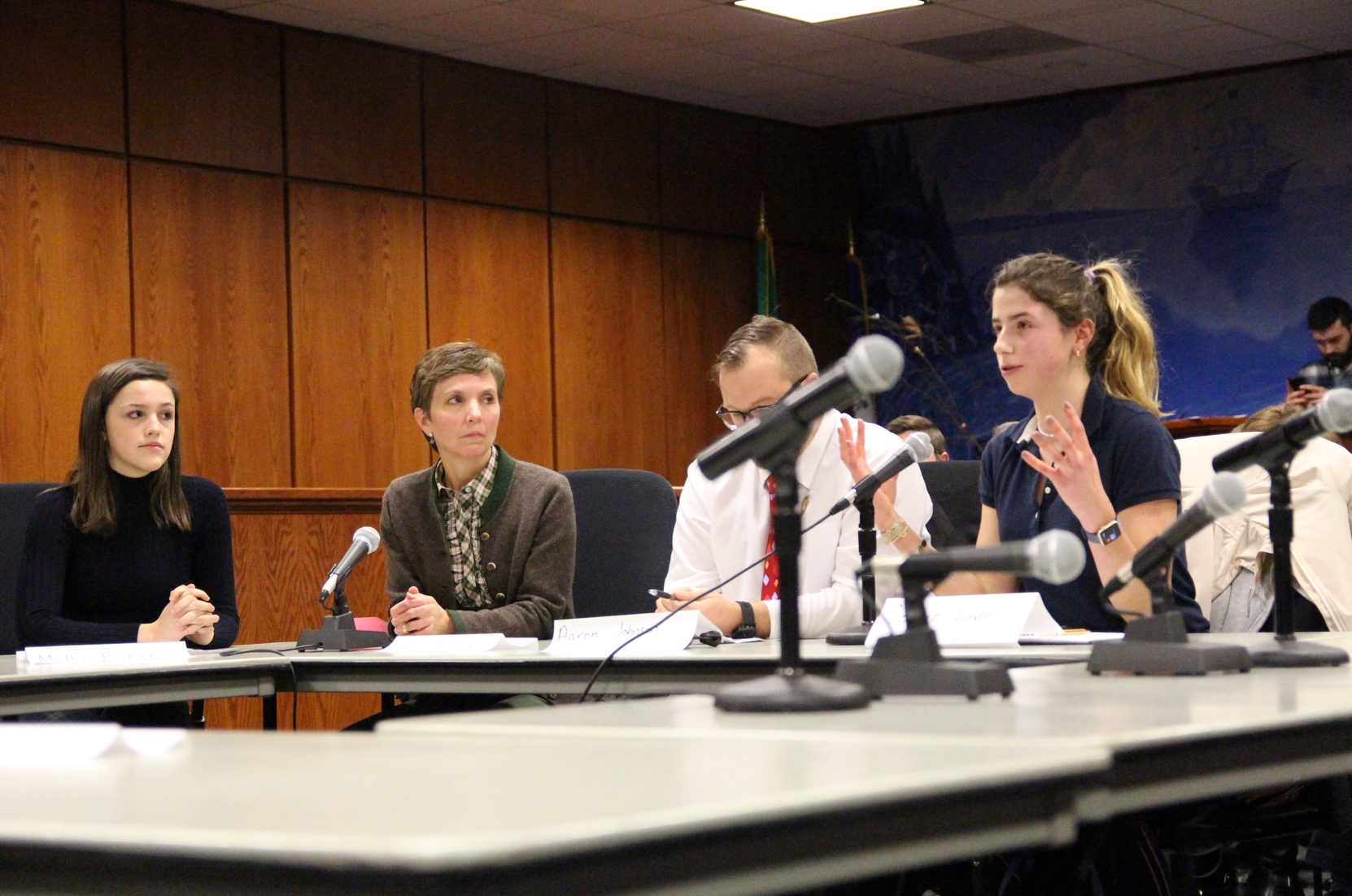 “As a student, all we ask for is safety,” Lindh said. “We are excited to coordinate this with voter registration and coordinate it with our empowerment.”

Murphy said he’d had a “very interesting meeting” with the president on Wednesday.  “He surprised a lot of people by supporting background checks for assault weapons. But he’s started to walk some of that back.”

“Connecticut has some of the strongest rules for guns. We’ve seen a 48% reduction in gun crime,” Murphy said, adding that it is no coincidence that Florida has a 400% higher rate of gun violence than Connecticut.

Greenwich’s GEA president cited a survey that said 85% of teachers are not interested in being armed. 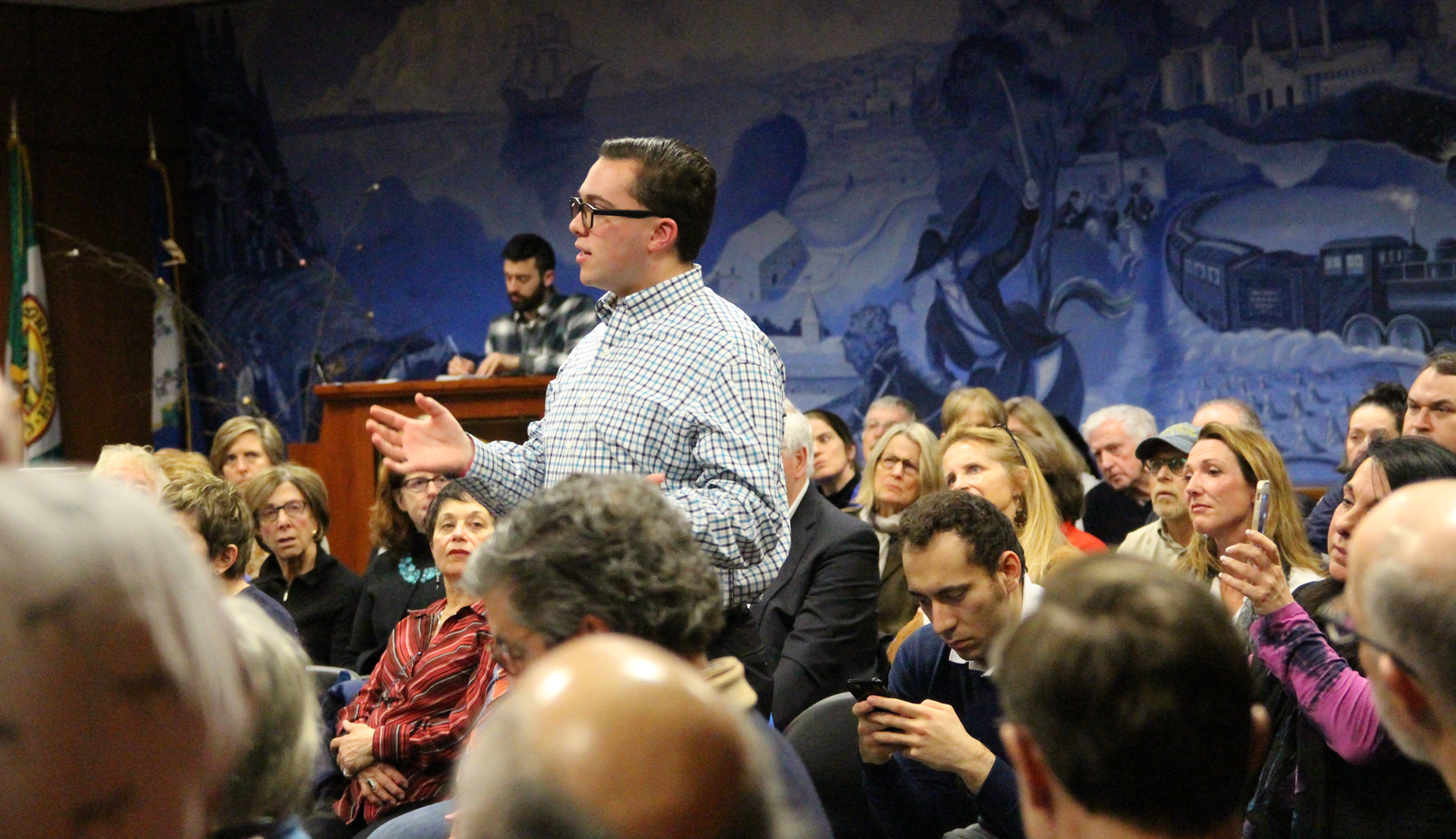 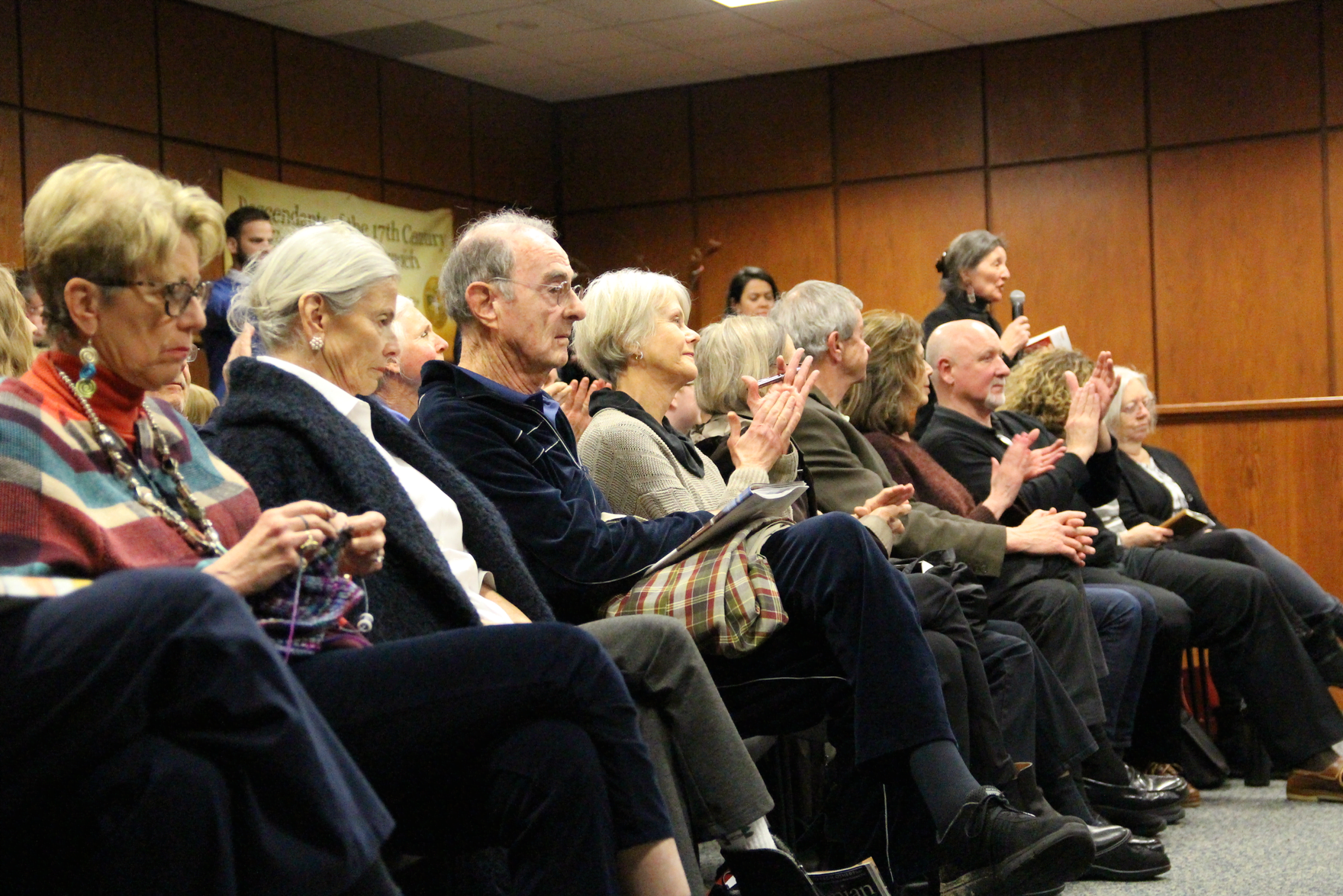 “Focusing on the gun, there also needs to be  focus on what else is in the bubble and what educators are responsible for,” she said.

Murphy said 85% of teachers don’t want to be armed. He said there are far more accidental shootings in the US than mass shootings.

Aaron Johnson, who said he taught in Newtown before coming to teach in Greenwich, held up two Sharpies as he said, “We’re here to support the kids. Teachers should be armed with pens!”

“The political landscape has shifted sideways,” Murphy said. “A consensus has developed, and the American public is making its outrage known.”

“Our Republican colleagues in the Senate are taking a much more active role,” Murphy continued. “They talking about raising a red flag for people who are designated a danger to others.”

Murphy said that 90 people are killed every day in the US, and that two thirds of those are suicides. “We’re talking about people in crisis who are a danger to themselves.”

Both Senators said Republicans are reluctant break with the NRA to do something meaningful on gun safety.

“We need to extend background checks across America and ban assault weapons,” Murpny said. “They have no purpose except to kill people.”

Greenwich’s GEA president said a survey of teachers revealed they’re not interested in being armed. “There needs to be  focus on what else is in the bubble and what educators responsible for,” she said.

Molly Baker a senior at Fairfield Ludlow, said her peers are asking her about gun control. 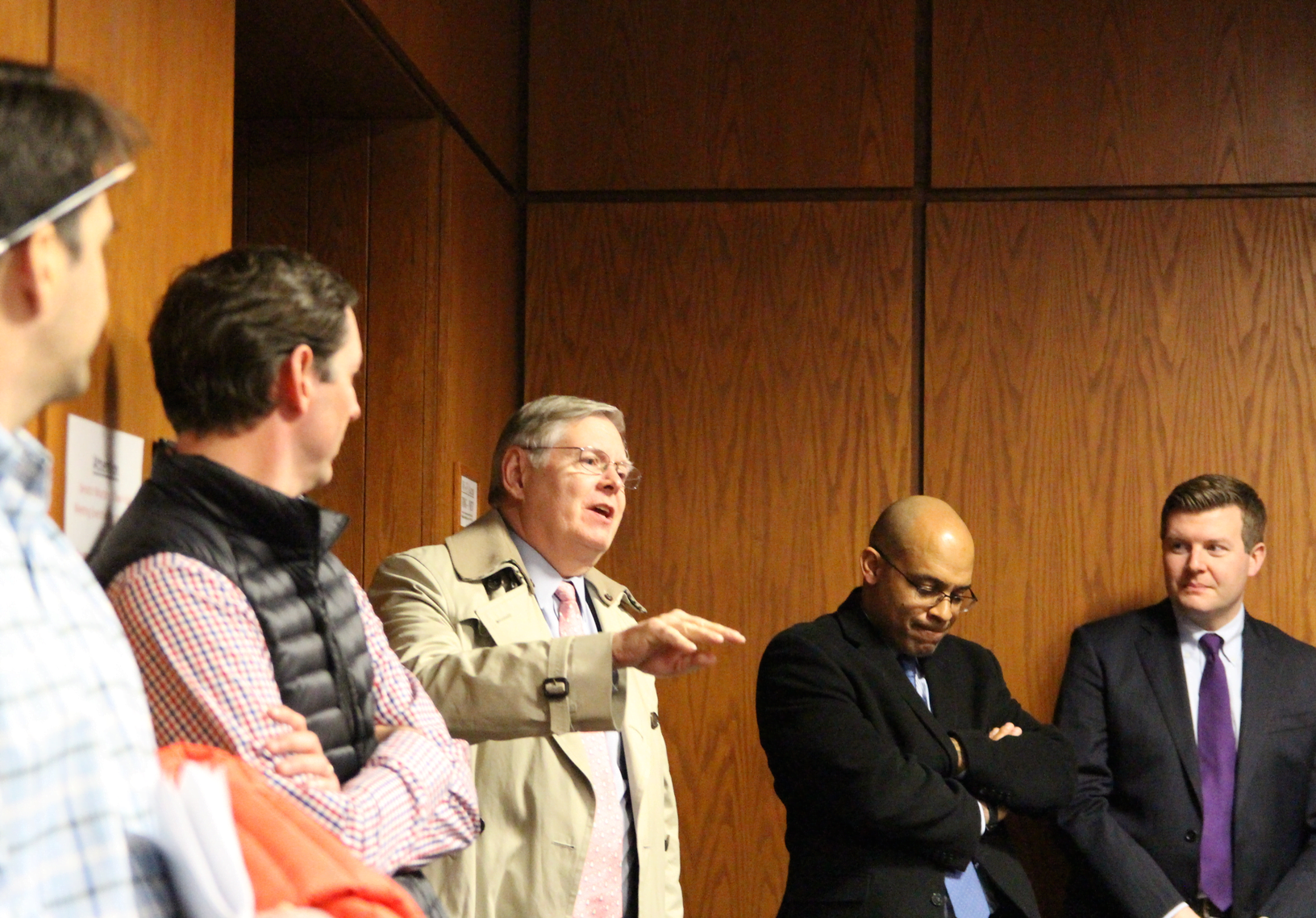 “Kids really want to form their own opinion,” she said. “With the walkout, even kids who don’t know the difference between Democrat and Republican want to participate in the national school walkout for students, teachers and administrators.”

Baker said she feared for her  own safety. “I can buy a gun but I’m still afraid for my safety,” she said. “It’s hard to reconcile.”

RTM member Laura Kostin, with two children in Greenwich Schools, asked the Senators, “What are your Republican colleagues saying to you?”

“There has been long term alliance between the gun lobby and the Republican party,” Murphy replied. “Their alliance is hard to break.

Blumenthal described the current moment as one of extraordinary opportunity.

“They sense they need to do something, but they’re not sure it’s possible to do something and maintain their NRA A rating,” Blumenthal said of Republicans. “It’s beginning to be evident which politicians are taking money from the NRA.”

Blumenthal said students have power and that there is a tradition in the US of students  taking action, and that the Civil Rights rights movement is a good example.

Carol Sutton said she has urged the BOE and administration not to inhibit students. She said previous generations had their moment. “Just like Vietnam,” she said.

“Knowledge is power, and students are just getting exposed to that,” Goldstein said. “We are promoting getting involved with whatever side you want to be involved with.”

“I view this as a social change movement,” Murphy said, gesturing to the teens. “You are being criticized by people who know your power. When you see the criticism, you know that is a sign it’s working.”

Carolyn Vermont, Director of Urban Initiatives at CAGV said gun violence in that city is an every day occurrence.

“It is becoming too normal,” Ms. Vermont said. “Guns and drugs are constantly being trafficked. The supply of guns is still there. It just keeps coming and coming.”

Blumenthal said there are steps that can be taken to taken to make school safer without arming teachers, including alarms, sensors, locks and and not necessarily arming teachers, or “creating a militarized fortress setting.”

David Lynch, a gun owner from Stamford said, “I’ve tried an AR-15 and they have no business in the private sector. “They are 33% more powerful than an AK 46.”

Blumenthal said there is a real appetite for gun buy backs.

“People want the guns out of their homes,” he said. “There were a lot of gun buy backs when I was attorney general for CT. “There was a real appetite for the gun buy backs,” he added. “Some of the strongest opposition to assault weapons are people who have been in combat.”

“We need to keep the heat up for more background checks. I don’t think the votes were there for an assault weapons ban, but that may change after the next election,” Murphy said.

“Make the goals high. We should not be settling for baby steps.” 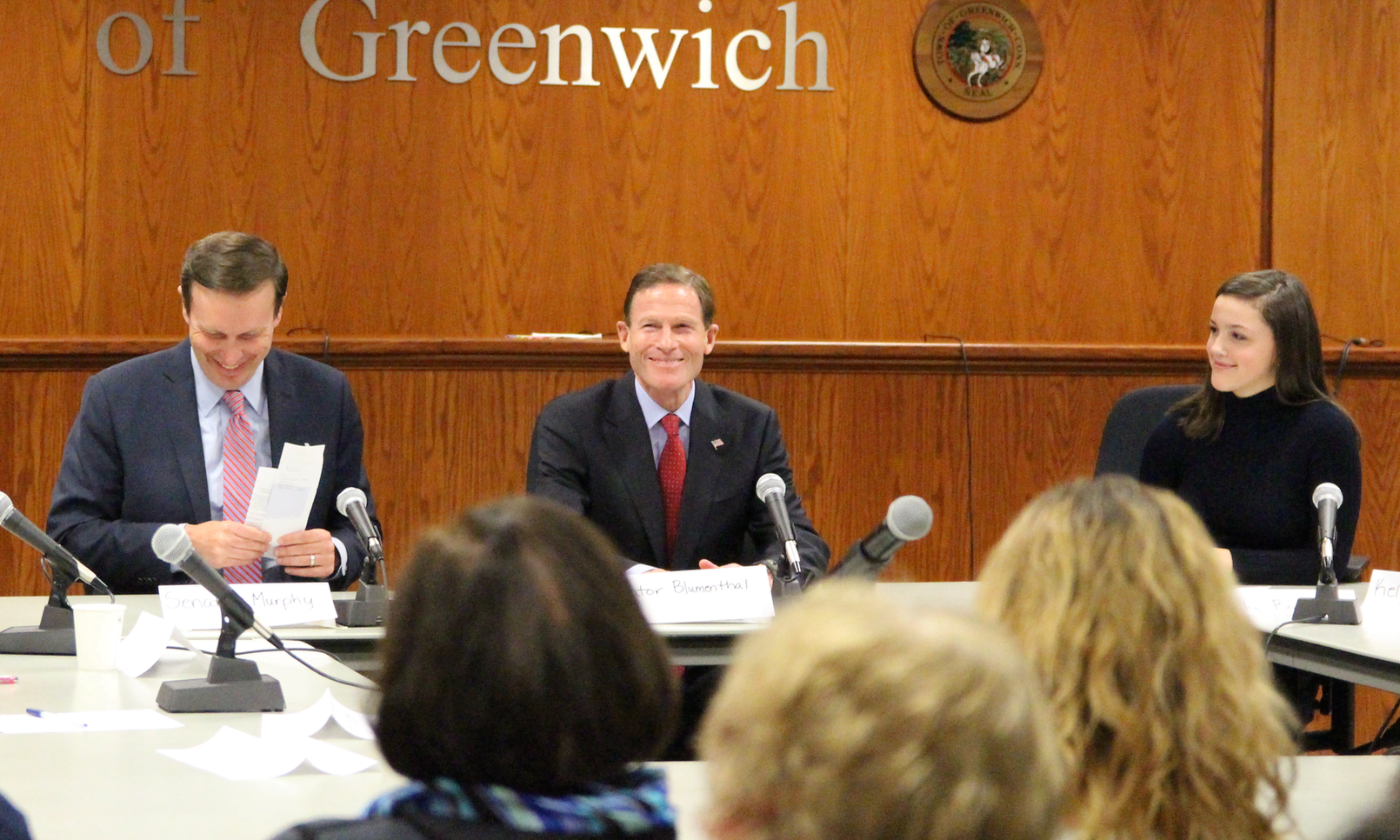