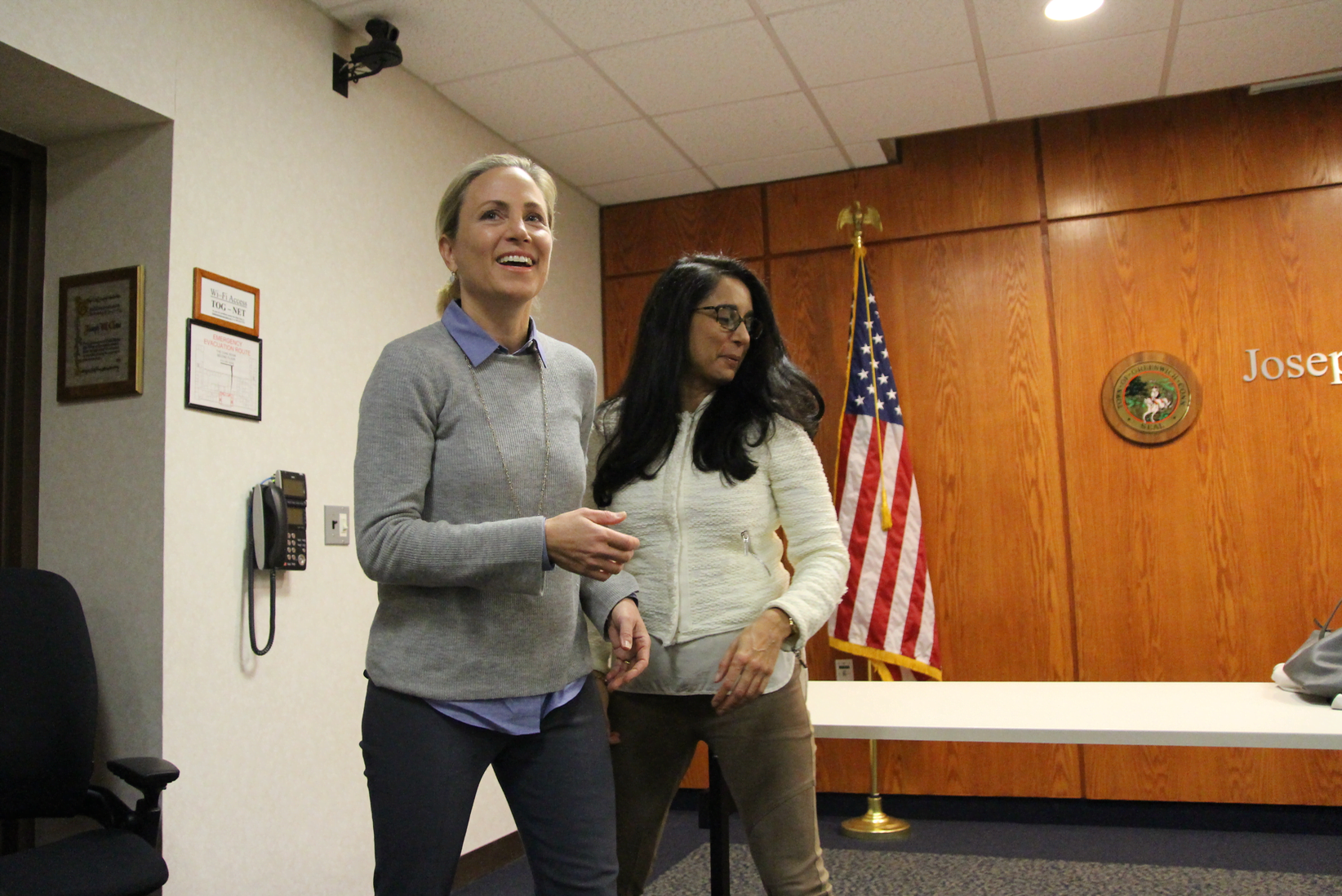 Bergstein’s district includes Greenwich and parts of both Stamford and New Canaan. Frantz has held the position since 2008.

The event was billed as a “community conversation,” and off the bat, Bergstein set ground rules for the standing room only crowd in the Cone Room.

She insisted the conversation be respectful and civil, and that anyone making a comment cite their sources.

The caveat wound up being unnecessary.

“I know many of you did not vote for me and I’m grateful that you came here to meet me and begin a relationship,” Bergstein said, adding that her goal is to build trust and increase civic engagement.

“I think our state has been mismanaged but we can turn it around,” she said. “We need to create the right conditions. We need to eliminate the estate and gift tax, and lower the individual income tax gradually, so we don’t spike the deficit.”

Bergstein said that with its failing infrastructure, Connecticut has fallen behind. “Companies say, ‘We’re not going to subject our people to traffic on I95 or slow trains,'” she said. “But, that is fixable.”

Bergstein said Connecticut must be a leader in preserving rights and values and create a progressive social environment that attracts millennials.

Determined to “eliminate the aisle” Bergstein said the first two calls she made after winning the election were to incumbent Republican State Reps from Greenwich, Fred Camillo and Livvy Floren, who succeeded in winning new terms.

“I told them how I’m looking forward to working with them,” she said. “They have a lot of institutional knowledge and they’re wonderful.”

Asked about the suggestion during the campaign that Democrats would install a statewide real estate tax, Bergstein said she absolutely opposed that and did not know the source of that suggestion.

“I never heard Ned say he was in favor of that,” she said. “I think that was fabricated. I would not favor that.”

There were many questions including one about the transportation fund lockbox. “I will defend that to the death,” she said.

“Talk about being raided,” said Lyn Arndt, a school teacher who is the parent of a 28-year-0ld son with Autism. Arndt said the Dept of Developmental Services, formerly the Dept of Mental Retardation (DMR), which provides services for intellectually disabled and mentally ill adults, has “a giant waiting list for services,” and has been cut brutally to the tune of $40 or $50 million.

“Can I count on you to work bi-partisanly,” Arndt asked Bergstein. 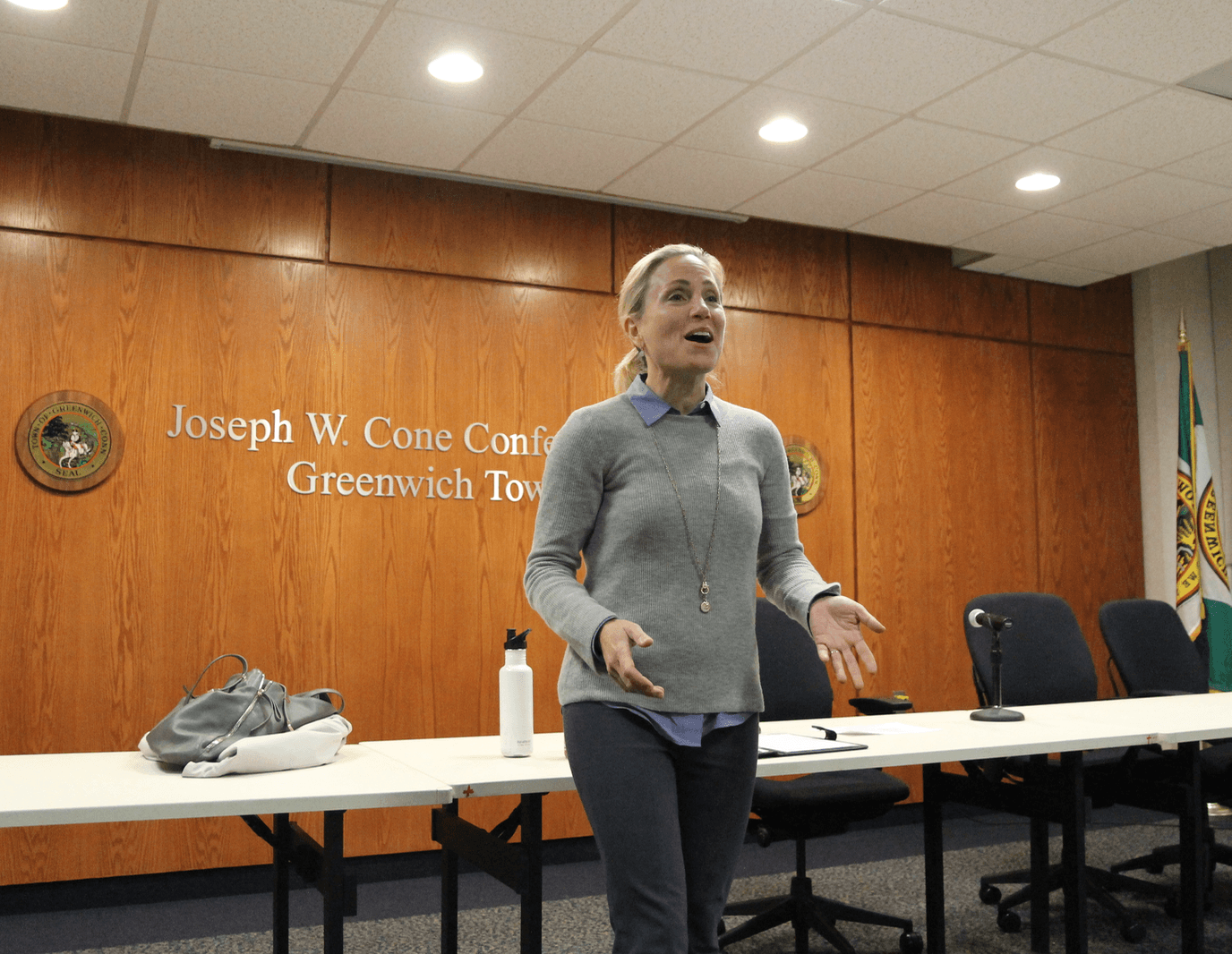 “Absolutely, yes,” Bergstein said, adding that she had spoken to individual families and learned that the delivery of services in Connecticut is inefficient and that there is a lot of “bureaucratic blockage.”

She said she’d heard from families who had tried to set up group homes, and even purchased the houses, but were blocked by the state.

“I want to repeal the estate and gift tax,” Bergstein said adding that controlling the budget is a top priority. She said the estate tax is indeed a “death tax” because people are leaving Connecticut for states like Florida and Wyoming where they might otherwise be staying on Connecticut and contributing to the economy for another 25 years.

On the topic of pensions, Bergstein said it’s important not to make “piecemeal changes” targeting new employees because the bulk of payments are going to existing retirees. She said unions are on notice that pensions could be annihilated if unions don’t come to the table and compromise.

“A conservative legislature would legislate away pensions,” she said.

Phyllis Behlen said she was in favor of growing the economy. But, she said, “What I’m having a hard time with is cuts to individual tax rates, cuts to corporate tax, and both gift and estate tax, yet we continue to have needs that go without being funded.”

She pointed to Lyn Arndt, the parent of a disabled son who said the DDS had been defunded. “Disabled and low income people – especially here where the cost of living is so high – there are people who want to work, but can’t afford the rents or health insurance.”

“Passing tax benefits for the wealthiest is irresponsible. I’m talking about responsible tax reform, revenue neutral tax reform,” Bergstein said. “For example, in Massachusetts they decreased the individual tax in small increments over time. That will stabilize the economy and free up money that should be spent on services and on education.”

Currently, she said, “That money is being crowded out by pension liabilities, which we have to take down. It’s all a balancing act.”

Bergstein declined to say what committees she is being considered for, but she spoke at length about tolls.

First, she said they would not “border tolls” that require a full stop and result in drivers being diverted from the highway at the state line.

“They would not go on at Exit 2 like 20 years ago,” she said. “They’re all electronic. People don’t slow down or get off the highway. Those are myths.”

Bergstein said the per mile cost would be about 5¢ or 6¢.

“Nobody is going to get off the highway for 5¢ a mile because everyone wants to get to their destination faster, including truckers who get paid for the speed of their delivery.”

“I think there already is a quiet consensus in Connecticut about tolls,” she said, adding that the suggestion Connecticut would lose funding if tolls were installed. “It’s just not a thing.”

She said Massachusetts installed their tolls in just two years.

Also, Bergstein said high speed rail from New Haven to New York is feasible and could get started with a year of revenue from tolls.

“We’re talking about using the existing tracks, maybe straightening a few curves – but not in Greenwich – not widening them, and upgrading three or four bridges,” she said.

Asked what might she do to convince Republicans to work with her, Bergstein said she will work to change the narrative within the party so that Greenwich is not perceived as an endless source of funding because “they are draining it and the fuel will run out.”

“We have to reframe their perspective so that they see us as an ally,” she said. “The Speaker of House is a union leader and just won by 18 votes, a very slim margin. …He’s got to know that not only is he on thin ice, but we need a radically different approach. Otherwise we’ll get a hard right swing and everything will get thrown out.”

There was a question about a comment made by Fred Camillo during these State Rep debate on Oct 11 in which he said social services should be transferred from the hands of state employees to local non profits.

Bergstein said there might be some merit to that idea because state social service employees make $30 an hour and local non profits pay $10 an hour.

“It’s a two tiered system,” she said, adding, “Why not work to collapse the two systems into one so that the state is managing and overseeing, but local non profits pay $20 an hour – a good wage.”

Bergstein said she intends to make the “community conversations” a regular event. She has one scheduled Tuesday night in Stamford and another on Wednesday in New Canaan.

The next at Greenwich Town Hall event is scheduled for  Jan 24, 2019 and ideally future meetings will be scheduled quarterly.