On Thursday Deputy Tree Warden Steve Gospodinoff held a public hearing at  Greenwich town hall on the fates of 6 trees that Eversource wants to cut down.

At issue are Five mature Norway Maples with 28 – 39” diameters on North Maple Ave, and one mature 28” Ash Tree at 98 Round Hill Road.

It was a rare face-to-face moment for residents to plead with an arborist from Eversource, Eric Barber, not to take down the trees down.

“You have a lot of mature trees in your town. There are a lot of trees with structural defects,” Mr. Barber said. “I respect his Town’s wishes, I really do. It is a tricky balancing act, for sure.”

Francia Alvarez from the Greenwich Tree Conservancy Eversource is cutting down trees in town that aren’t replaced. “The trees are in perfectly good health,” she said.

“They shouldn’t just be cutting down trees because it’s convenient for them and protects the power lines,” Alvarez continued.”Power lines are everywhere, and if we start to cut down all the trees under power lines, there will be no trees left.” 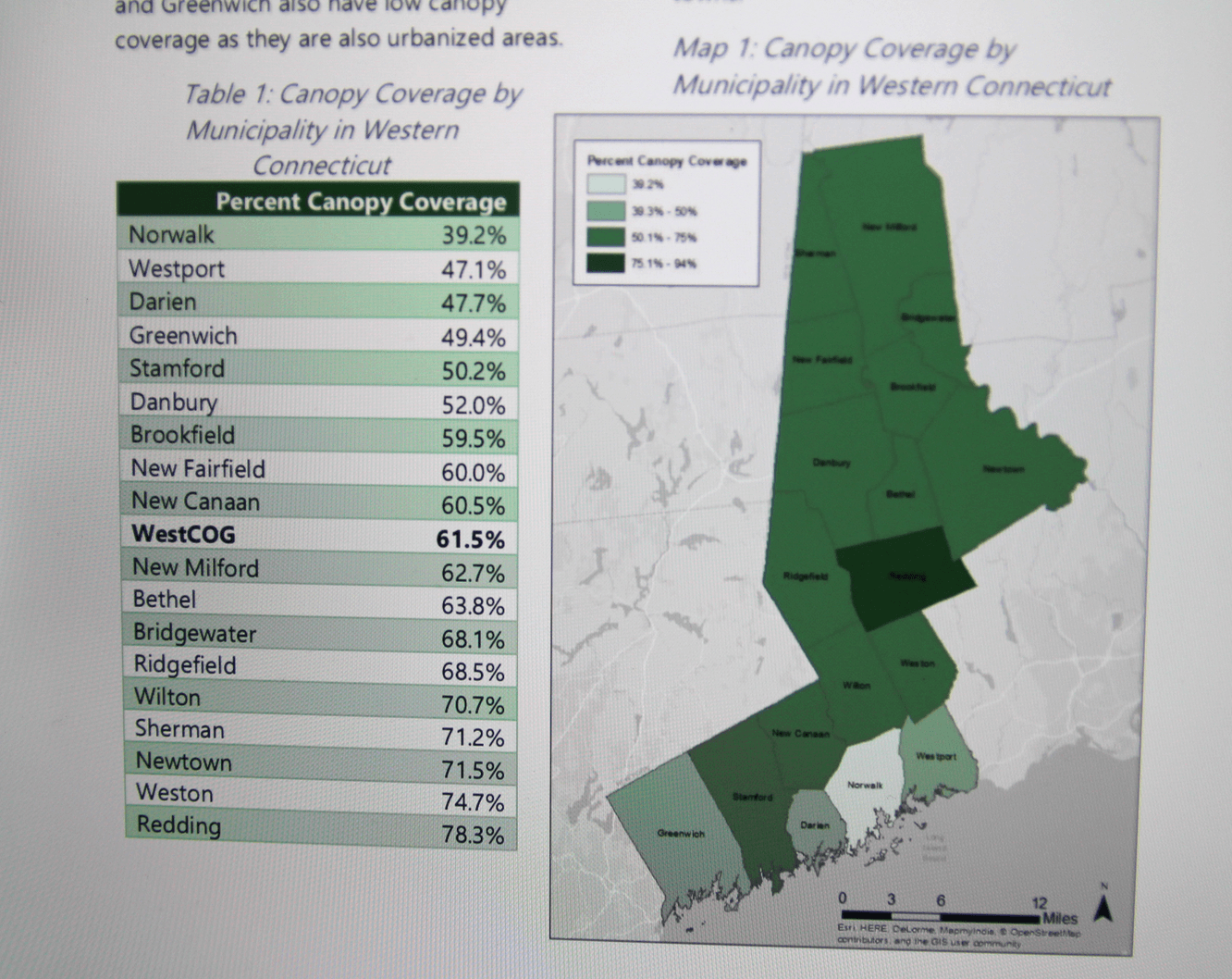 She said trees provide shade to houses and roads and absorb storm water.

JoAnn Messina, director of the Greenwich Tree Conservancy said, “We’ve had disagreements with Eversource over when trees should come down and when they should be pruned. In many cases it’s less expensive to take a tree down than to prune it correctly.”

She said her organization objects to Eversource’s enhanced tree trimming (ETT). “We don’t agree with sky-to-ground clearance as other towns have agreed to. We don’t need to clear trees from 8 feet.”

Mr. Barber, a licensed state arborist who has worked for Eversource for three years, said his background was in residential tree care.

“Believe me, I understand your concerns,” he said. “I used to deride what the utilities did to trees. It wasn’t until I became a consultant that I learned why we do what we do for protection of the electrical reliability. It is a tricky balancing act.”

Barber went through his reasons for wanting to cut down each of the six mature trees. 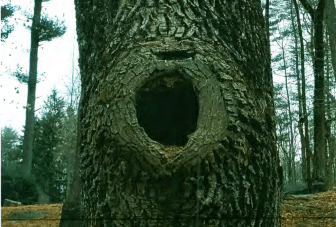 Ash Tree at 98 Round Hill Road.

Mr. Barber said the Ash Tree at 98 Round Hill Road is in close proximity to a transformer and backbone power line that feed 340 customers.

He said he was concerned about Emerald Ash Borers, which are a non native beetles that infest and kill North American Ash species.

Barber said there is a good size hole on the back of the tree that appeared deep.

“It creates a structural weak point. That raised my alarm,” Barber said. “We don’t know how deep it goes.”

Derek Kaufman, a resident of 98 Round Hill Rd, said he had worked for 10 years with Plantscapes to take care of the Ash Tree in front of his house.

He read a letter from Plantscapes owner Dan Nadeau that said: “We examined the tree and found no existing issues with rot, insects or disease. The tree is very healthy… The tree has been under our care for many years and our clients have spent a lot of money keeping it well.” 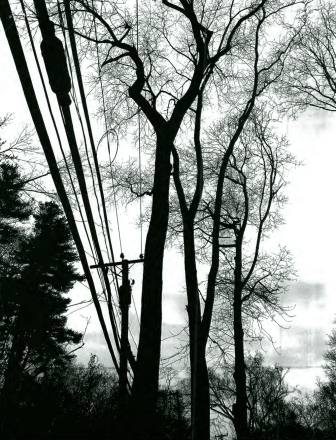 Mr. Gospodinoff said he had spotted signs of the Emerald Ash Borer in Greenwich.

“I could see it in the blooding of the bark and we had to take it down,” he said, referring to one tree on Stanwich Rd.

Mr. Kaufman asked for a compromise. He said he was willing pay for fungicide treatments and inspecting the tree annually.

“You can do a treatment with a systemic pesticide so that that if the bug tries to infect the tree that it ingests it and dies,” Messina suggested.

Joy Rendahl of 476 N Maple Ave said she was dismayed in November to find the five trees posted for removal by Eversource.

“They are mature trees that have withstood many storms since 1961,” she said adding that was the year she moved into her house. “That includes very damaging storms in the last three years.”

Ms. Rendahl said over the years, a total of 35 mature trees had been cut to the ground on the south side of North Maple.

“I’m very grateful for your thoughtfully selected replacement trees, but no person here today will live to see new trees attain the stature of these mature trees,” she said.

Rendahl said it didn’t make sense to cut down an 80-year-old tree to avoid a possible “temporary inconvenience for a few people.”

He said 3 of the 5 trees (not just branches) are in direct contact with primary power lines.

Mr. Gospodinoff asked if Eversource could move the lines away from the trees.

“No, the lines are already engineered out as far as they can go,” Barber said. 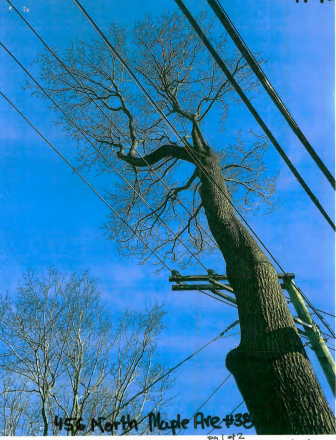 Barber said one Norway Maple at  456 North Maple is in close proximity to backbone power lines and has a trunk cavity with internal decay about 35 ft up.

“The root system has sustained mechanical damage over the years, leading to some decayed areas on large structure roots,” Barber said.

Ms. Rendahl said she believed all 282 residents Eversource says are at risk of losing power have their own generators.

Mr. Gospodinoff asked whether it was possible to put a rubber sleeve or hard plastic sleeve on the three trees with direct contact to power lines.

Mr. Barber said he would look into that suggestion, but that sleeving is a short term fix. 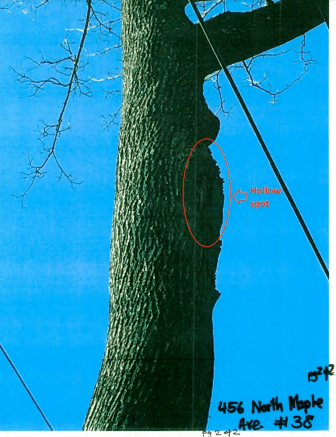 “There is always friction. It won’t take long to wear through the plastic. …It’s a very short bandaid,” Barber said.

“I don’t know. I’d have to talk to an engineer about that,” Barber said, adding that a sleeve might extend the life of the tree by five years.

Barber repeated that when trees and power lines are in contact, it poses a threat.

“The wire is not insulated. It has a coating on it that can wear through. Eventually the tree could become energized, and become a public risk, cause a fire to the tree, and an outage,” he said.

Barber referred to CT State Statute, 16-234, which says Eversource does not need permission, consent or notification to remove any tree, or any part of it, that is in contact with a primary power line.

The second tree at 456 N Maple, a 30” Norway Maple, is in direct contact with a primary power line. Barber said there is mechanical damage to its root system, which could be caused by lawn mowers, plows, trucks, cars or anything other than by nature.

He said the tree has a “girdling root,” which can lead to decay in the trunk.

“This tree is declining,” he said. “It’s not in good health. …You don’t need a storm for dead wood to fall off a tree. I’ve seen it happen on a calm day. We’re concerned decay has gotten into the base of the tree. The tree could become energized and cause an outage.” 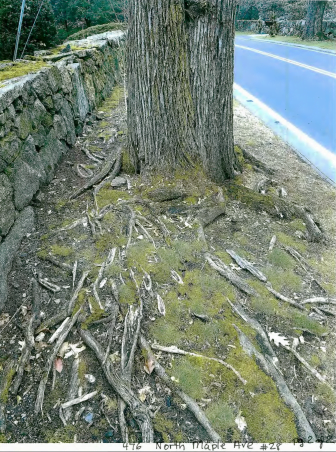 Barber said a Norway Maple at 476 near Bobolink is growing through power lines, has mechanical damage to the root system, and girdling roots, and that the top half the top of that tree is dead.

“This tree is declining. There are signs of decay and dead wood,” he said. “It’s in severe decline.”

“Can you remove the top half?” Ms. Rendahl asked.

“I’d have to look into that,” Barber said. “It’s something we can explore with the town.”

There are two Norway Maples at 519 North Maple that are in contact with a power line. One tree is in contact with the primary power line. Barber said it has deadwood at the crown and decay at the trunk, and that the likelihood of failure is probable during normal weather conditions. 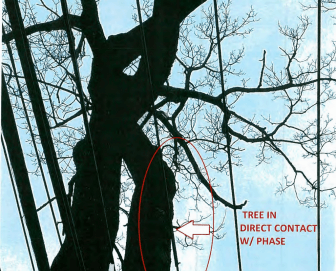 “They’re weaker wooded. They don’t get stronger. They’re like people. They have a finite life span,” he said. “They’re not typically long-lived like Sugar Maples which can live hundreds of years.”

“The more trees you cut down, the more flooding you wind up with in town,” she warned. “You want water filtered through the ground to improve quality of well water.”

“I don’t think it’s ever advisable to take down 5 trees at one time in one area,” Messina said. “It doesn’t make sense. Let’s try to see what ones we can save, which can live another 5 or 10 years, and take down what is clearly hazardous, if they are hazardous.”

“I agree Norway Maples are no longer our friend,” Messina continuted. “The Town hasn’t planted them in years. We wouldn’t replace with the same, but they provide all the benefits – flooding, air, water – and we don’t want to lose them. We have been replanting on North Maple Ave, and Eversource has not been helping us.”

“That has not been the philosophy of Eversource,” Messina said.

Messina said there is a difference between an unhealthy tree and a hazardous tree. She said safety is paramount and if a tree is indeed hazardous, it should come down, but unhealthy trees are a different story.

“Root issues and dead wood – a lot of us live with unhealthy things for years. That doesn’t scare me so much. And mechanical defects? If we took down every tree DPW hit with a plow, we’d be in rough shape.”

Steve Gospodinoff addressed Mr. Barber. “If we do allow you to cut some of the Norway Maples on Town property by the power lines, would you consider planting on private property with permission from residents?”

“Sure, like a one-for-one replacement, yes,” Mr. Barber replied.

“Eversource has said they would not replant at all,” Messina said. “This is totally exiting!”

“With a caveat,” Barber said. “Not everywhere. Not across the board. It’s one-for-one in highly sensitive areas like these stately old trees with a lot of sentimental value.”

“Town tree policy states that a tree needs to be replaced one-for-one,” Messina said. “I would think Eversource could go under that.”

Per statute, a written final decision granting or denying permission to take down these trees will be issued by Gospodinoff within three business days.

Greenwich Free Press will update the story when a decision is announced.