Greenwich implemented new single stream recycling rules on July 1. Some items that residents were used to recycling are no longer accepted.

There are also some items that are recyclable that may come as a surprise, including pots and pans and aerosol cans.

“When Styrofoam breaks down it breaks up into beads or small pellets that contaminate other items,” Collins said. “It’s like if you rub a balloon in your hair, it’ll stick. It’s the same with Styrofoam. It clings.”

“The plastic bags themselves, if they’re unadulterated, they’ll be recycled just like at grocery stores,” Collins said. “But recycling plants don’t want them mixed in with all the other recycling.”

“A little oil stain is okay. As long as the wax paper is removed and there is no food left in it.

As for aerosol cans, if they are empty, they also may be recycled. However, if there is any liquid remaining, it’s trash.” 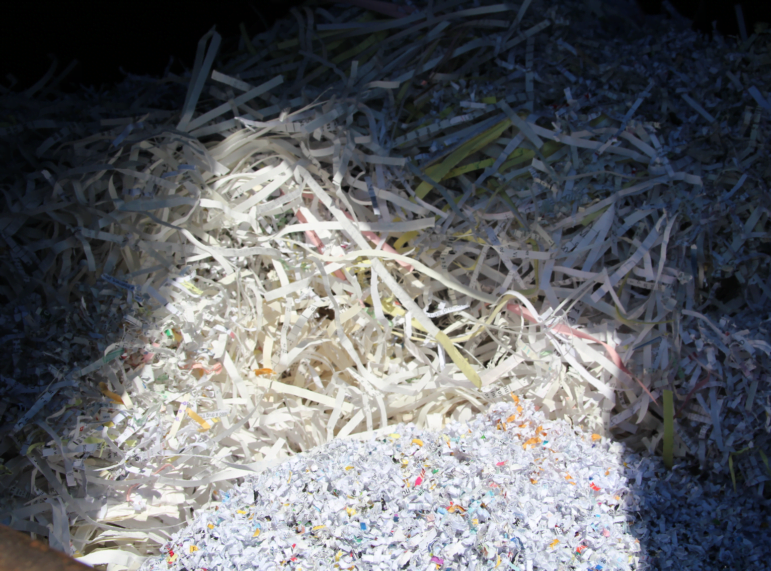 Collins described the single stream recycling process as like a scene out of a Dr. Seuss book.

“First there is an enormous magnetic steel wheel and a reverse magnet to draw in the other non magnetize metals,” he said. “Then they have electric eyes and scanners looking for glass bottles. They also have blasters and blowers to separate and vibrate along the belt as they go through an enormous catacomb.”

“The process is amazing—down the conveyor comes one finished product that is cubed and fits on a pallet and is driven onto a truck. From there the trucks usually head to the piers in New York City.”

The problem with small materials like shredded paper and even foil yogurt lids, is that they stick to other materials.

“You go to some of these packing plants and it’s like New Year’s Eve with packing peanuts and shredded paper flying through the air,” said Collins.

Collins explained that the exclusion of plastic bags in single stream recycling is perhaps the most impactful change. 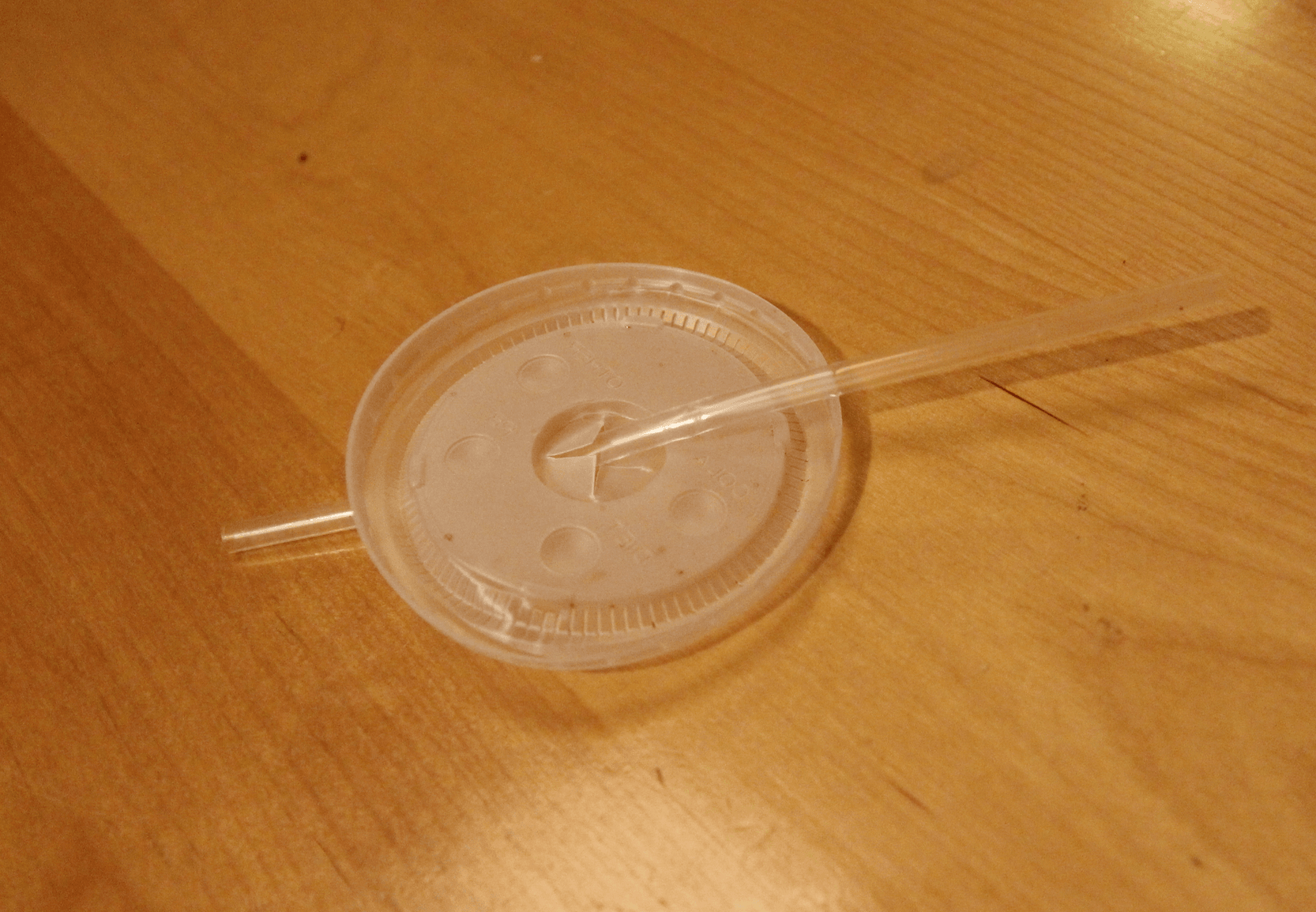 Plastic straws must stay out of single stream recycling.

“Plastic straws are no longer recycled. But paper straws are great,” Collins said. “We use them at home and they still make them. Those will eventually break down, but not plastic.”

As for cups, he said it’s possible to rinse and recycle a those classic red Solo cups, but not paper cups because they get wet and absorb liquid.

“The world is just generating too much plastic and the ocean’s showing it,” Collins said. “We need to cut down.”

Some more specifics to consider in light of the new changes:

All items being recycled must be thoroughly washed.

Paper materials like paper napkins and cups are not acceptable if they are in any way soiled, or contain liquid.

Paint cans can not be recycled. A can containing paint can ruin an entire 30-40 yard container.

Single stream recycling is only for household items. This means pots and pans are okay. Car parts are not.

The new rules are far from arbitrary.

In fact, they are necessarily if the US wants to continue to have a robust recycling industry.

China previously accepted the majority of the world’s recyclable items. However, in the past year, that has changed.

“China has really pushed back on taking recycling,” Collins said. “Anything from aluminum cans, single stream recycling, office paper cardboard, plastics 1 through 7, was going to them – they were happy to accept them. But now they’re addressing their own pollution problems.”

“The whole world was sending to China – even Australia. We cleaned up our backyard, but then theirs got dirty,” Collins said. “Now they’re being pickier and setting new standards.”

Without China readily accepting the world’s recycling, some municipalities including Stamford are charging residents to have their recycling taken away.

In Greenwich, Collins said the new recycling rules should go a long way to ensuring Greenwich does not have to start paying for recycling.

Jay Greco of City Carting & Recycling, who is on site at Holly Hill about four hours a day, noted that Greenwich is actually the only town in the area that is anywhere near to achieving this standard.

“The single steam that comes from Greenwich is by far the cleanest,” Greco said. “In Stamford, New Canaan and Norwalk, the contamination levels are probably at 10%.”

For comparison, Greenwich is only at around 2.5-3%. Greco attributes this in part to enforcement, but also to Greenwich’s ongoing efforts to educate residents.

Electronics Recycling
While Greenwich has a successful single stream recycling system in place, this is not the only form of recycling where the town excels.

“It was all by hand from people dropping items off here,” he said. “That actually equates to six 100-yard trailers that are not going up to the waste- to-energy plant.” (Greenwich sends waste to plants in Bridgeport and Peekskill, NY.)

Greenwich excels at recycling and is in a good position to do even better. By following these new rules and remaining committed to recycling, the town can keep costs down and keep items out of the trash.

Click here for the 2018 Flyer with updated information on recycling at Holly Hill.

Click here for more information on Holly Hill including directions and a map of the facility.

Wondering What Happens to Plastic Bags at The Dump?  (May 2018)

The Future is Not Plastic in Greenwich. Plastic Bag Ban with Zero Fee Wins in RTM Vote (March 2018) 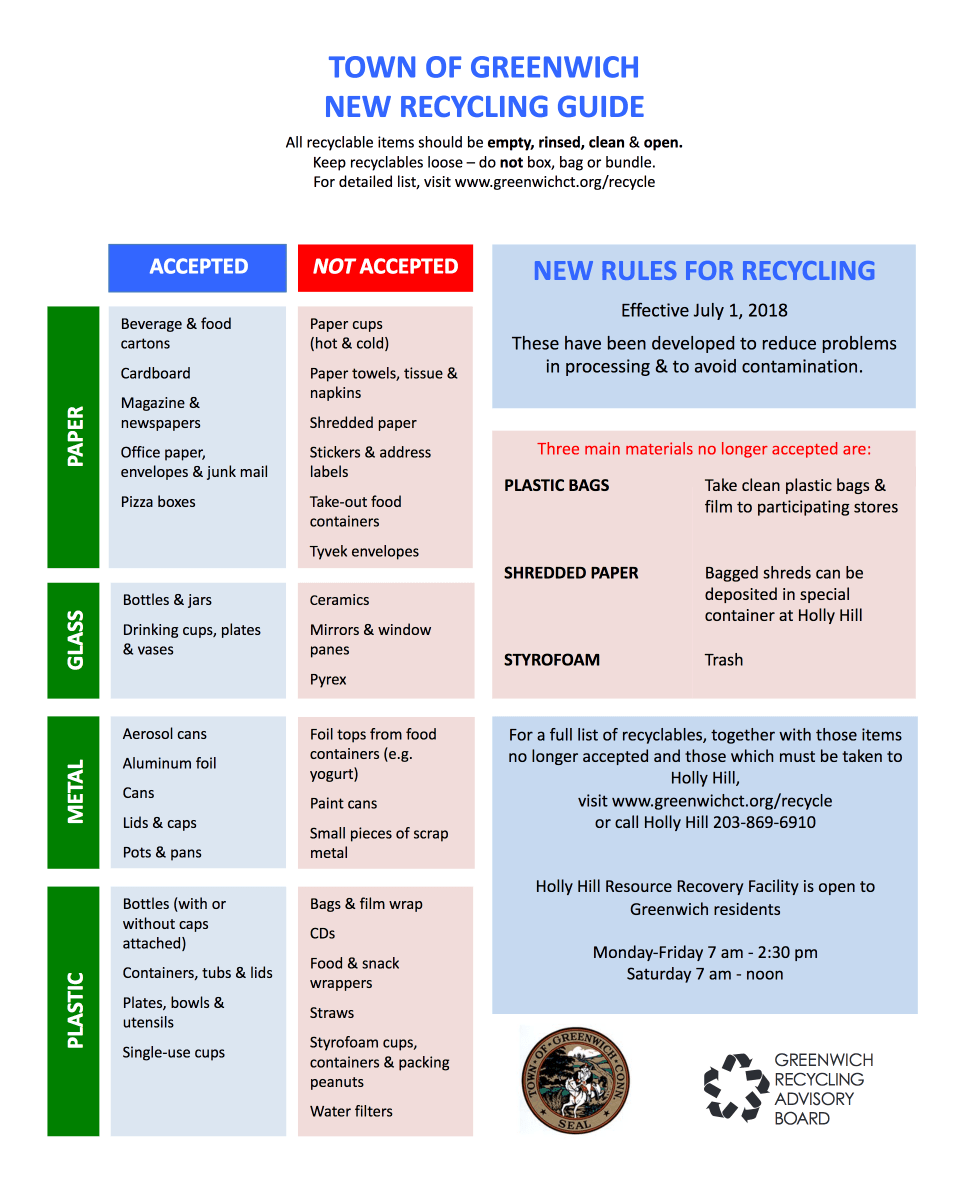