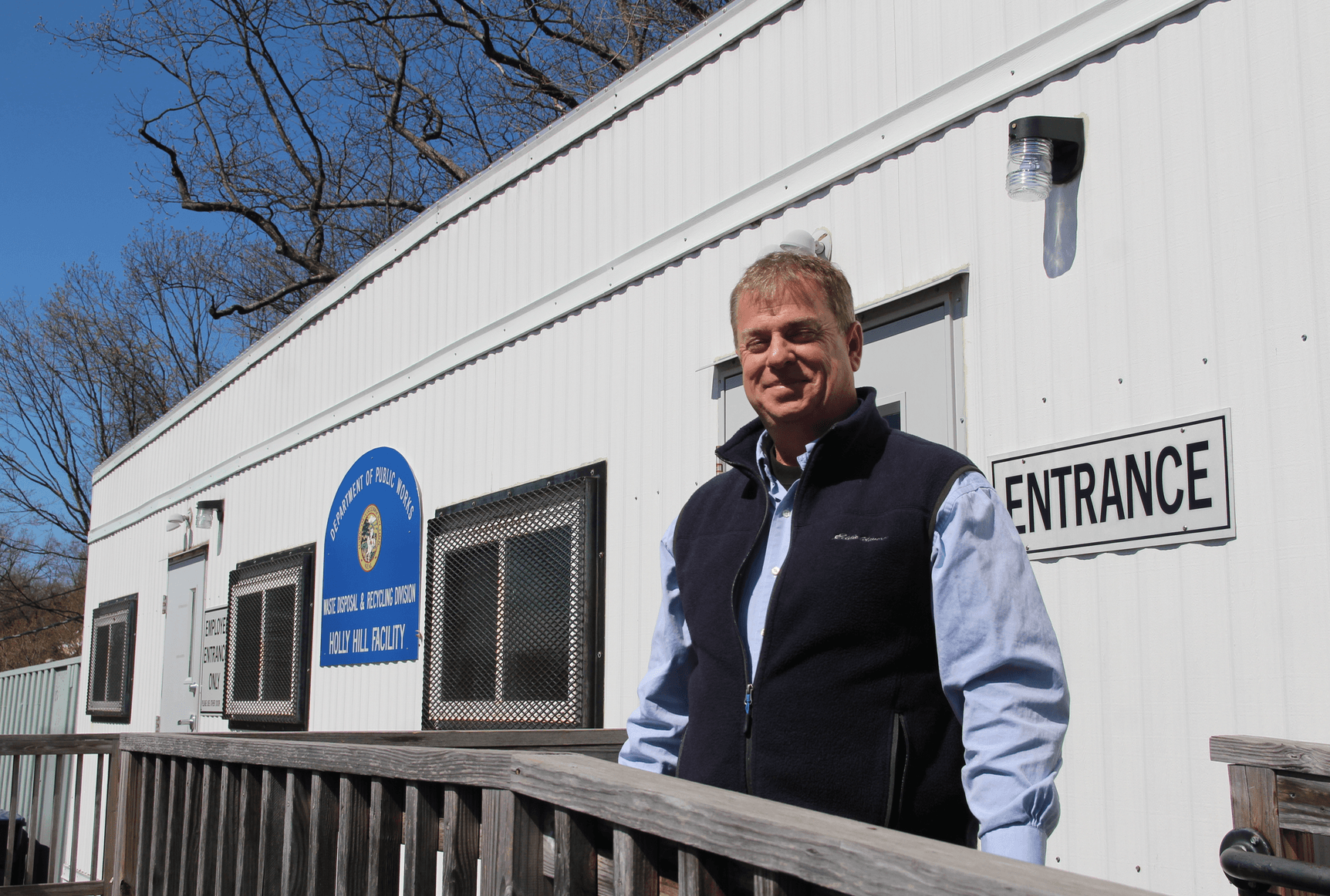 Patrick Collins, the superintendent of the Holly Hill Resource Recovery and Recycling Facility busted some myths this week.

Since the RTM voted to institute the plastic bag ban, effective Sept 12, 2018, awareness has increased about what happens with single use plastic bags when consumers are done with them.

Despite Holly Hill, aka “the dump,” having an ever lengthening list of items that can be recycled, plastic bags are problematic in the single stream recycling process.

This includes not only plastic bags covering newspapers and those dispensed from the grocery store, but also the film that butchers use to wrap a foam trays of meat of poultry.

Collins said he doesn’t object to the term “dump,” despite it having been ages since garbage was literally dumped there, because people want to do the right thing and it’s valuable for everyone to see each other recycling.

He said the dump offers a sense of community. “It’s like an old fashioned barbershop, people catch up with each other at the dump.”

The problem, Collins explained is that all these carefully washed recyclables often arrive at the dump inside a big plastic bag. Worse yet, three are the bags full of plastic bags. This is where the problem starts.

“We see people are going through a lot of trouble cleaning their recycling but when they put it in a plastic bag, it finds its way into the machinery,” he said. “At one time the plastic bags were recycled. But what they’re finding is that there’s so many plastic bags coming in that they’re gumming up the works.”

He said the state DEEP took a survey from Connecticut’s six big recycling plants and asked them to list their hindrances. For starters, he said, “We realize China is pushing back on materials we send them to recycle – as far as plastics go.” As a result, he said 90 percent  of our material is now handled and sold domestically.

Why is China pushing back? Because Americans too often engage in “Wishcycling.” Collins said Wishcycling is when people include soiled food containers and other dirty but otherwise recyclable items in their recycling.

“People were just sticking it in their recycling bin with food still in it,” he said. “And they had to pay for the removal of this contaminated material.”

Not just a greasy pizza box, he said. “Pizza boxes with crusts and cheese still in them.”

Collins said Greenwich’s single stream recycling goes to Taylor Reed in Stamford, an enormous station where it is separated by machinery.

“While separating all the recycling materials, the machine literally has to be shut down 3 times a day to get the plastic bags out. They are gumming up the conveyor works and the machinery for separating materials.”

“It’s just by coincidence with the plastic bag ban that all this is coming up,” Collins said, adding that he is glad for the opportunity to set the record straight.

“You can return the bags back to the stores – the grocery bags, like the ShopRite yellow bags. They will still take them back. And they are recycled. They can be used again for creating everything from carpeting to fleece. It’s easier for them to market that material because it’s unadulterated versus bags mixed in with other materials.”

Collins said he recommends washable fabric reusable bags. “With the recycled plastic grocery bags, you can’t wash them. Think about it. The meats will leak. If it’s a hot summer day and you wipe it out, the bacteria is still there. I recommend washable cotton bags. That’s always best. You get a better life out of them.”

For those not engaged in Wishcycling, who feel guilty if they don’t empty and recycle an expired jar of peanut butter, Collins said to consider the waste of hot water and the carbon footprint that expands in the process. “Just throw it in the garbage. Yes, some of these things should go in the trash.”

So too should your plastic bags, if you’re still using them.

“A lot of people have called us up about the plastic bag ban,” Collins said. “I love the inquiries about the basics of what’s accepted and not.”

“The schools are also doing very well with recycling,” he continued. He said that at Cos Cob School, Julie DeChamps from the Greenwich Recycling Advisory Board “GRAB,” put together the program where the cafeteria no longer uses Styrofoam trays.

“When we were kids it all went through a dishwasher,” he recalled. “There was one green pail for scraps. Now we’re generating boatloads of trash in the schools and focusing all this extra energy to try to recycle it.”

Collins last plug besides the upcoming hazardous waste day at the Island Beach lot on Saturday, is for people to come see him for a dump sticker. “Get a sticker,” he said.

Collins said his team is planning a townwide mailing through GRAB , Green & Clean and DPW Waste Disposal on the upcoming plastic bag ban.

Collins said he welcomes questions about recycling or getting a sticker to use the facility. He said the best time to call is between 7:00am and 2:00pm at (203) 869-6910 call between 7am and 2pm. Recycling questions or dump sticker.

The Future is Not Plastic in Greenwich. Plastic Bag Ban with Zero Fee Wins RTM Vote