The dogs did not make a peep. Not a single woof. That said, in their silence the dogs still managed to steal the show. 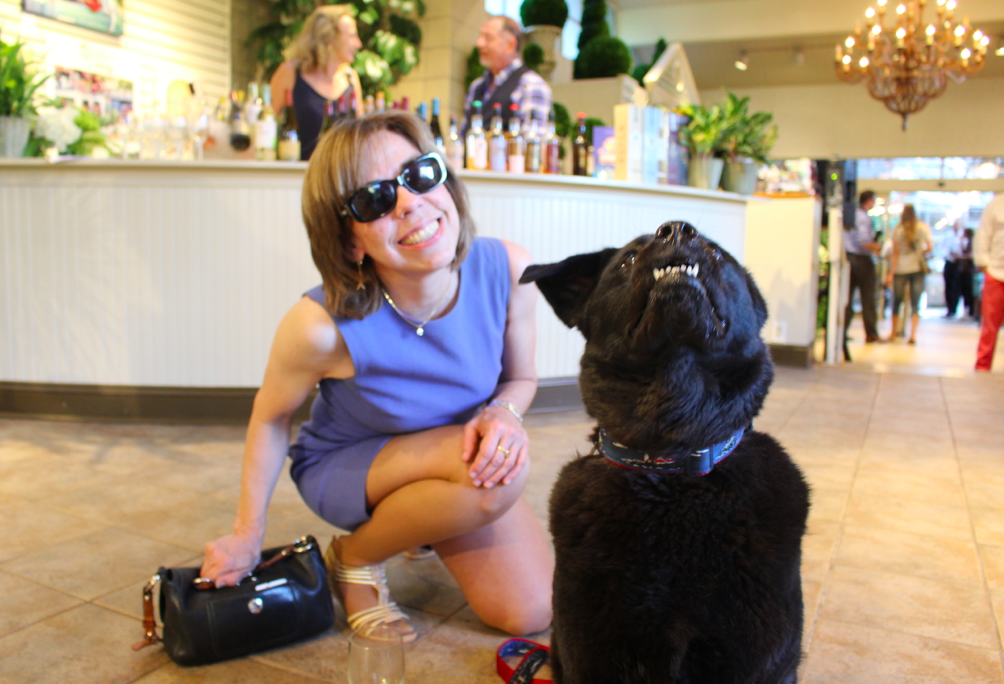 Nora Maloney and Lizzie, a black lab who came from Adopt-A-dog. Lizzie made everyone feel special, but she was partial to her friend Perkins. Credit: Leslie Yager 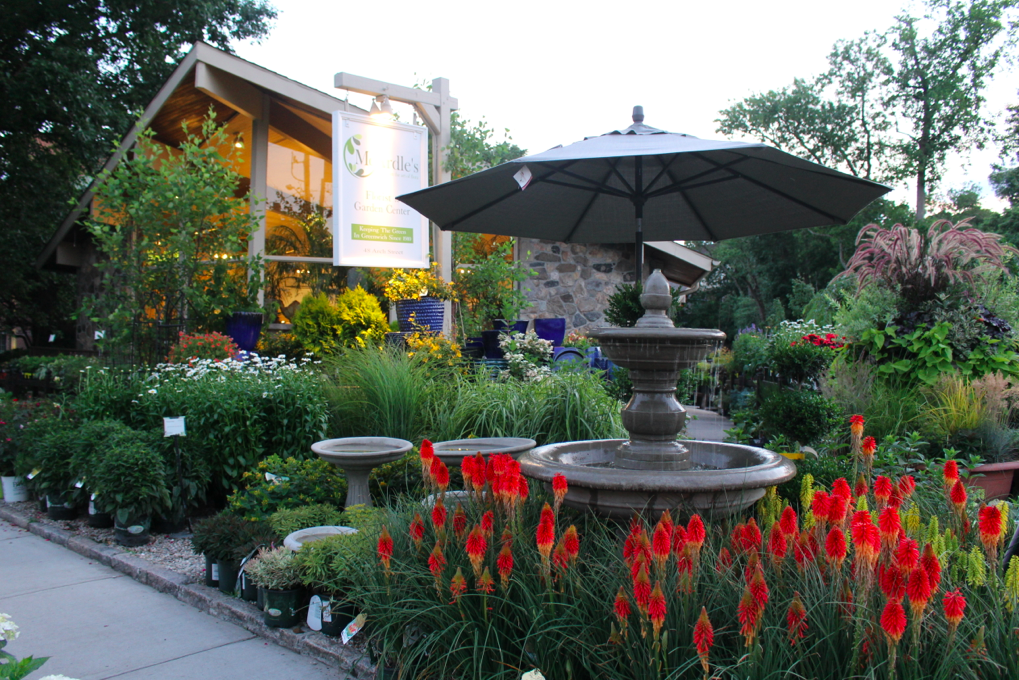 Offering a specious venue full of gorgeous flowers, James McArdle of McArdle’s at 48 Arch Street in Greenwich, put out the red carpet for an Adopt-A-Dog fundraiser. Credit: Leslie Yager

On Thursday night, McArdle’s Florist & Garden Center, offered up their spacious building on Arch Street for a fundraiser for Adopt-A-Dog. Most of the dogs in attendance were originally rescues from Adopt-A-Dog, a Greenwich based non profit with a shelter and sanctuary just over the state line in Armonk, NY.

While patrons sipped spirits from Horseneck Wines & Liquors of Greenwich and savored mouth-watering hors d’oeuvres provided by Fairway Market, the dogs didn’t so much as beg for a morsel. 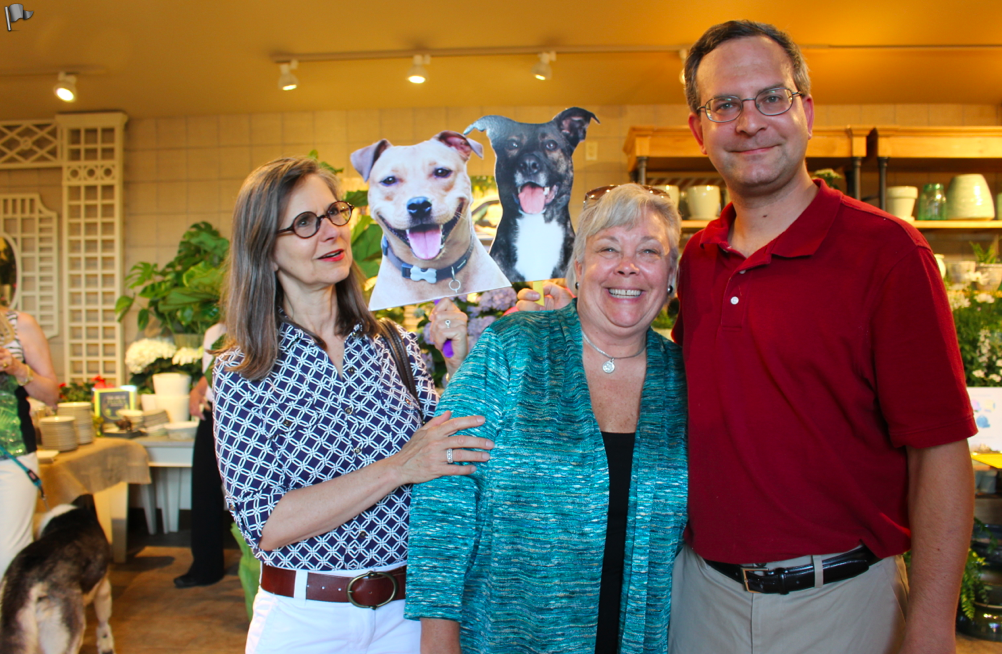 Melinda Muller with Allyson Halm and Brian Gordiski of Adopt-A-Dog at the “Barks and Blooms” fundraiser at McArdle’s. Credit: Leslie Yager

Expert pet photographer Geoffrey Tischman was set up for portraits at the front of McArdle’s, while Allyson Halm, the director of Adopt-A-Dog and volunteer Melinda Muller disappeared and reappeared, photobombing the event with life size dog faces. 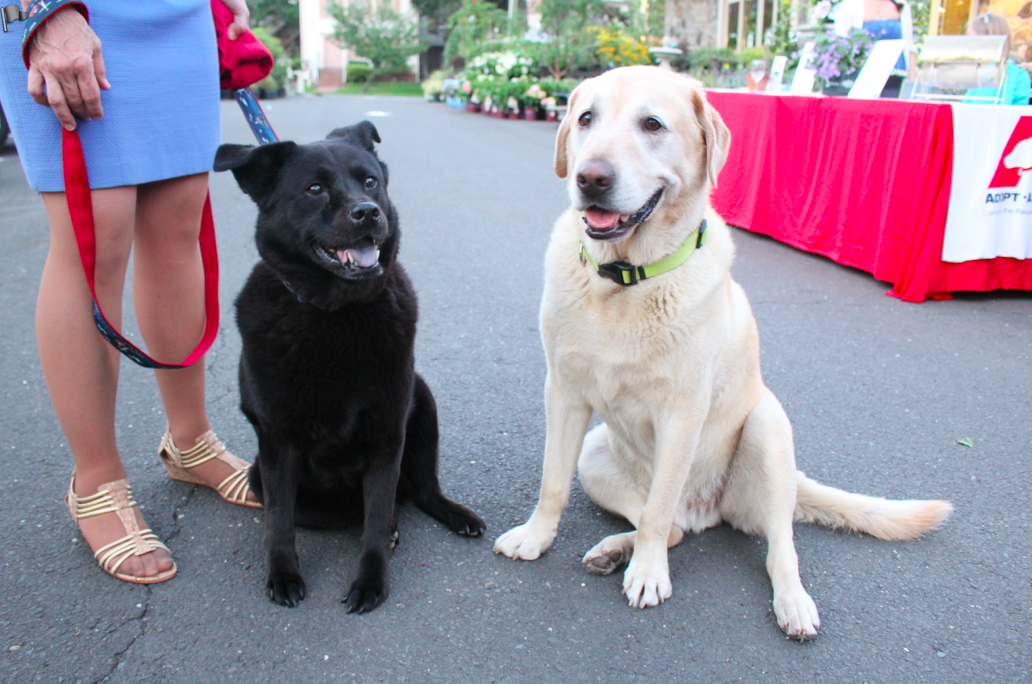 Attending the event was Navajo who made the trip from his home in Wilton for the event. His owners are Kristina and John Curran, who has volunteered at Adopt-A-Dog for 20 years. Navajo, a jumbo shepherd, was an owner surrender who made his way to Wilton by way of the Armonk sanctuary. 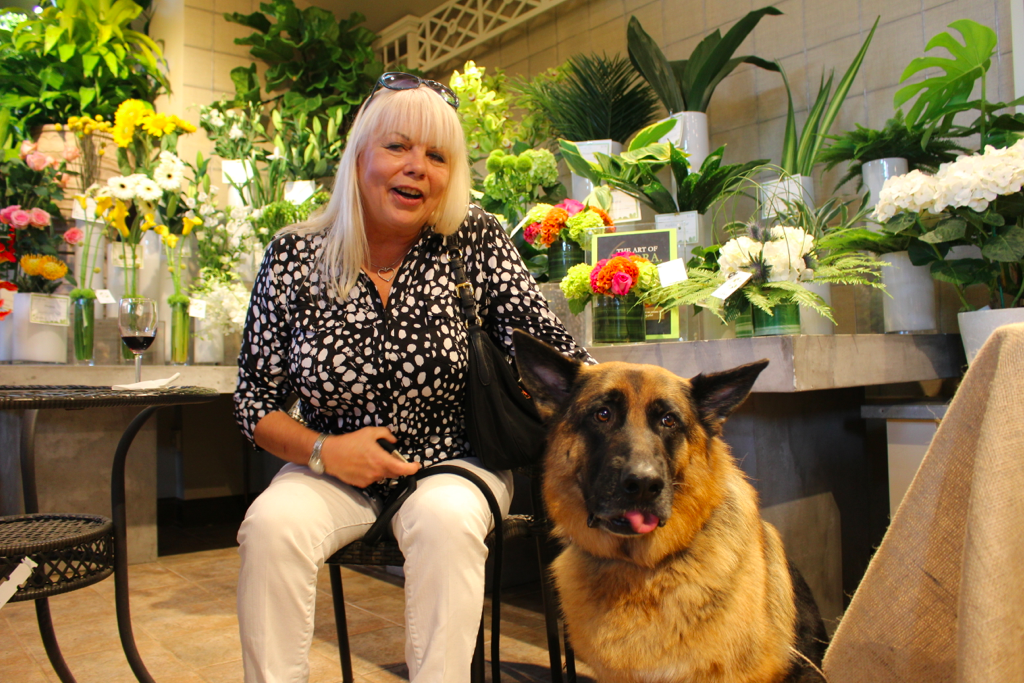 Kristina Curran with Navajo. Kristina’s husband John has volunteered at Adopt-A-Dog for 20 years. The trio traveled from their home in Wilton for the fundraiser at McArdle’s. Credit: Leslie Yager 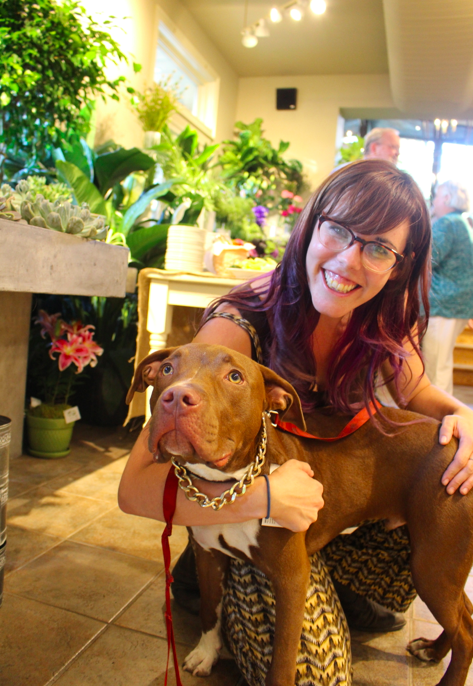 The youngest dog in the house was Huxley who is owned by Laurel Wood of Brooklyn. Huxley, a 7-month-old pit bull-chocolate lab mix who came from Heavenly Angels Animal Rescue in Ozone Park, NY, was full of puppy energy but ranked amongst the best behaved. 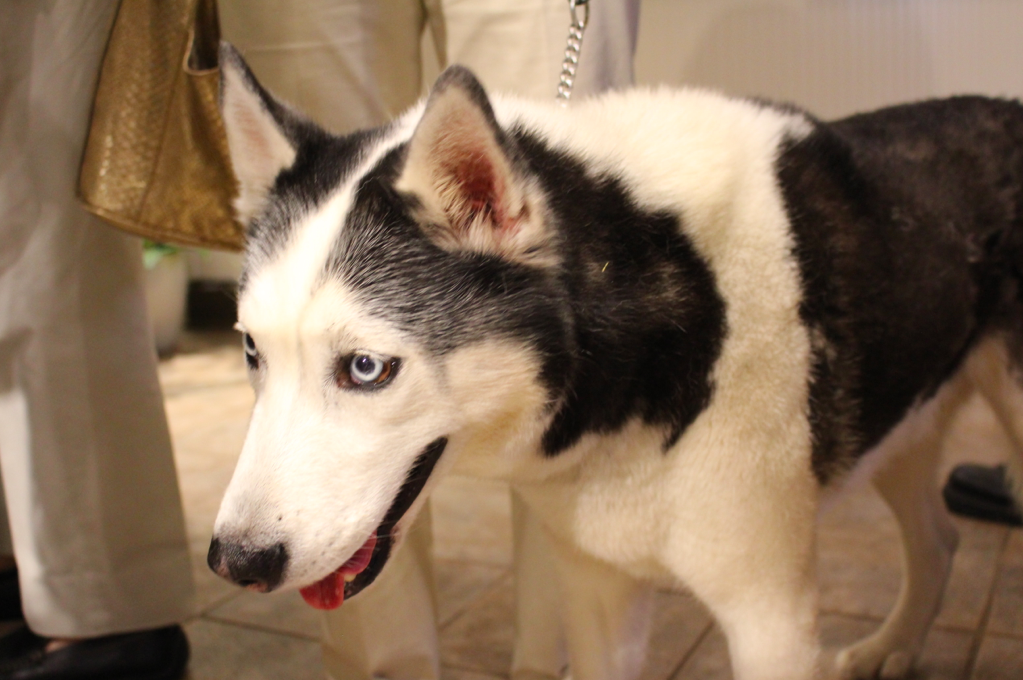 Apache, with his beautiful blue eyes, arrived at Adopt-A-Dog as an owner surrender and was lucky to make his way to Norwalk and the home of the Muldowney family. Apache enjoys his day with three sibling rescue dogs: Honey, Cody and Bingo! Credit: Leslie Yager

Apache, a 7-1/2 year old Husky, arrived at Adopt-A-Dog as an owner surrender. A few weeks ago he was adopted by Diane Muldowney who attended the event with her daughter Meghan.

The Muldowneys, who made their way through traffic from Norwalk for the event, have three other rescue dogs: Cody (4), Honey (11) and Bingo (4), a black lab from Puppies Behind Bars who had been trained in prison to be a therapy dog for veterans with Post Traumatic Stress Disorder. 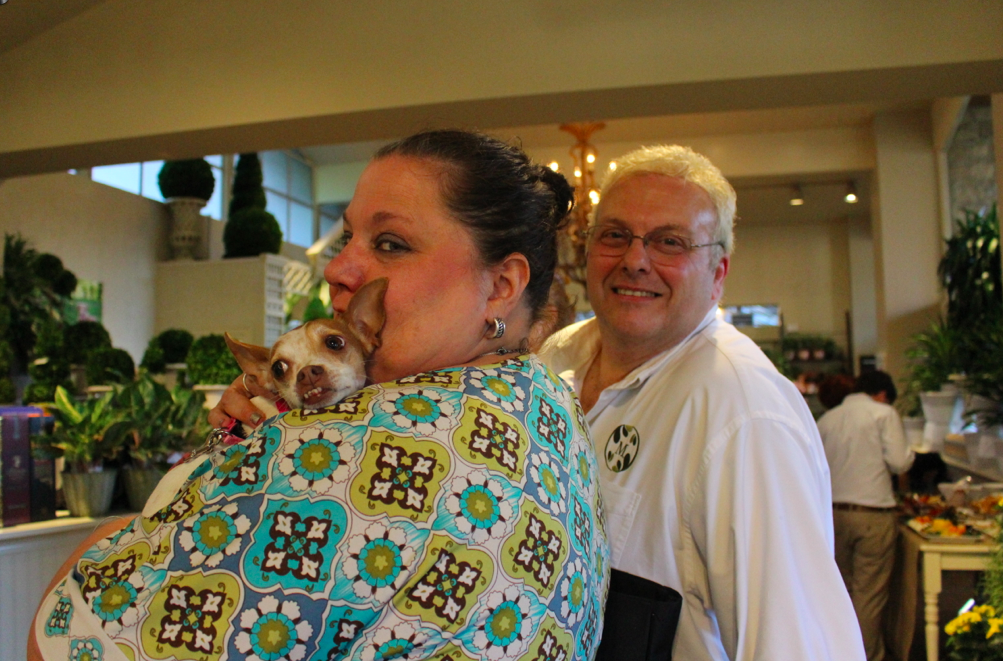 George von Tobel, who has worked arranging flowers at McArdle’s for 2-1/2 years, had the novel idea of bringing pets to the florist and garden center for a fundraiser. On Thursday, he attended the event with his wife Karen and adopted Chihuahua “Lulu.” 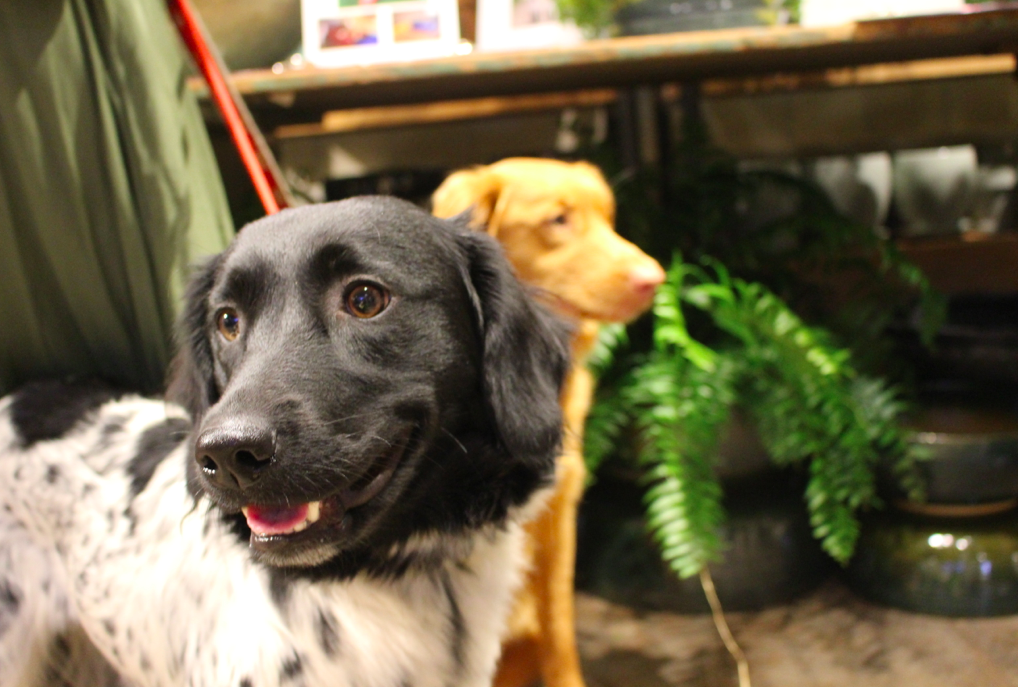 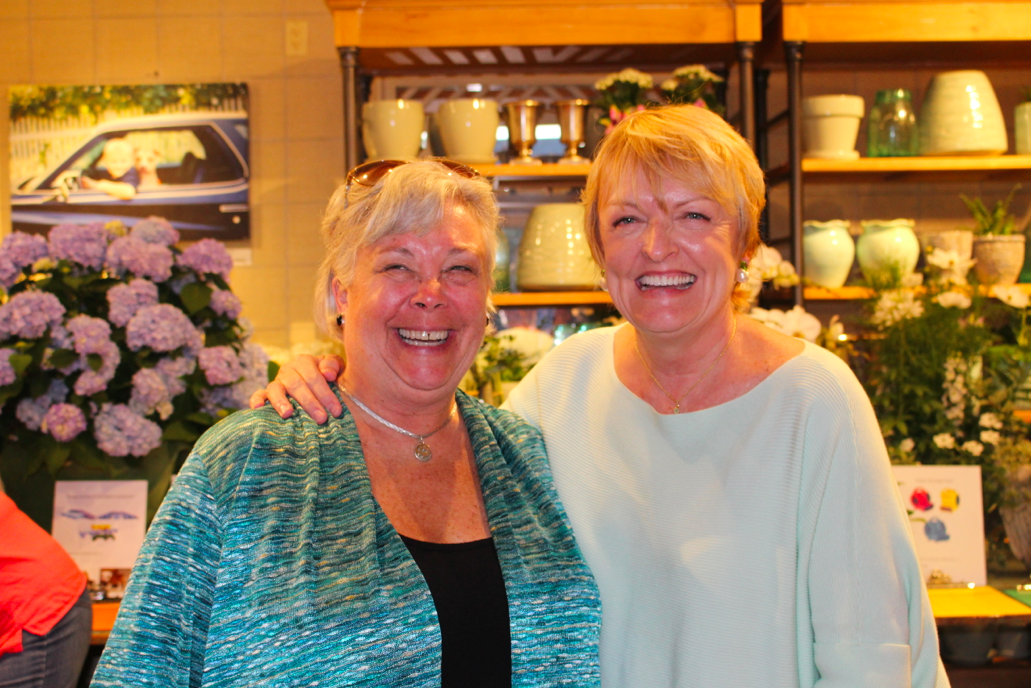 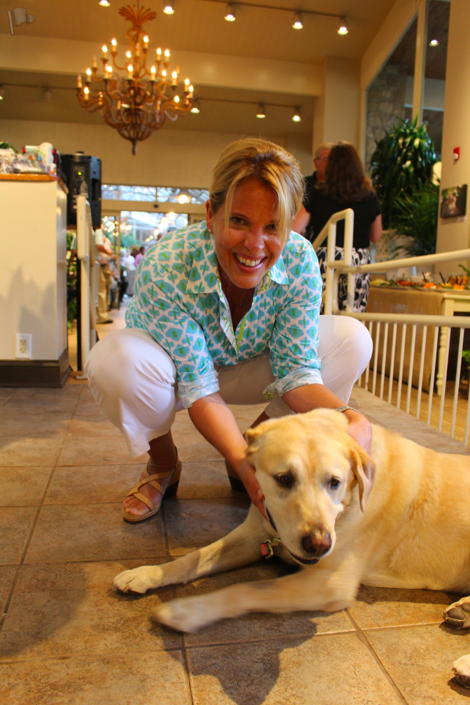 Perkins the dog was a charmer at the Barks & Blooms fundraiser for Adopt-A-Dog at McArdle’s. Credit: Leslie Yager 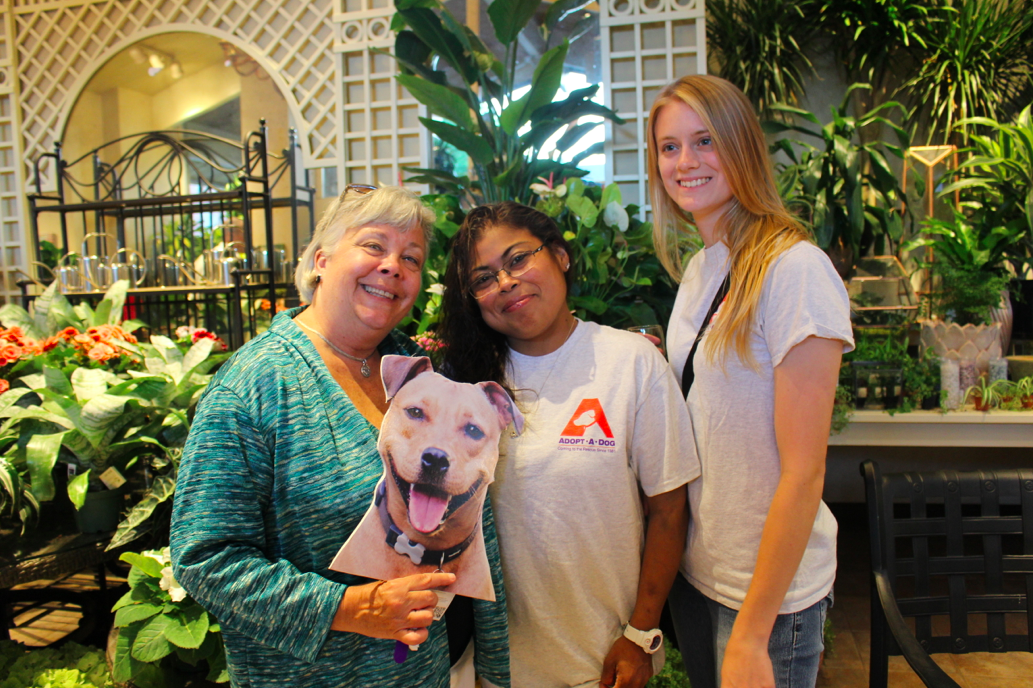 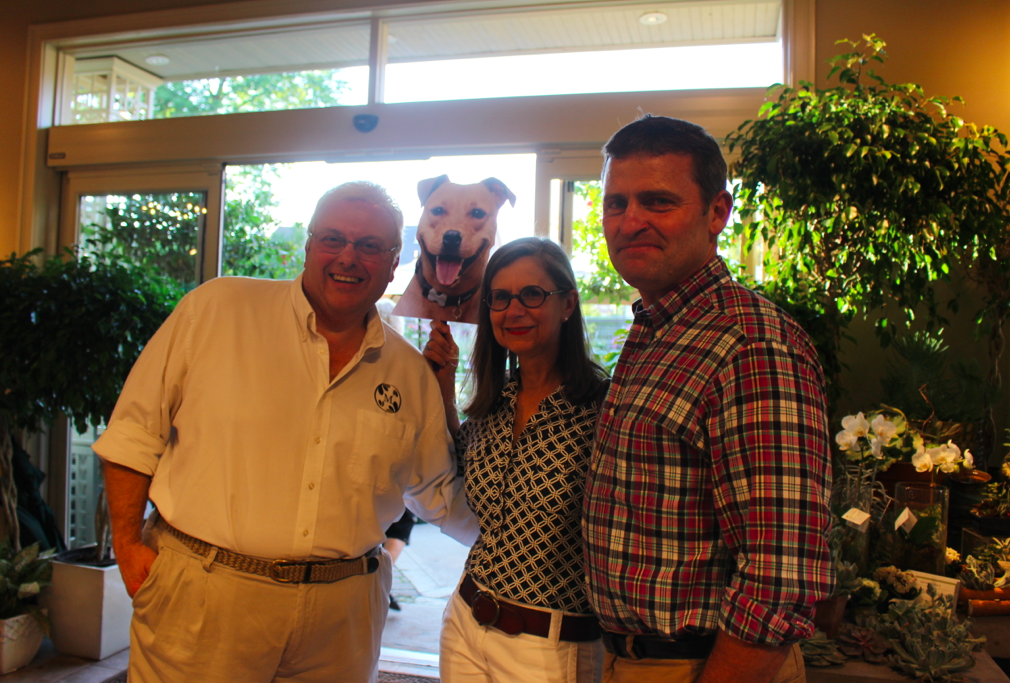 George von Tobel of McArdle’s with volunteer Melinda Muller and James McArdle at the Barks and Blooms fundraiser on Thursday. Credit: Leslie Yager

Some Whiskey with Your Wisteria? Barks and Blooms is Set for Thursday at McArdle’s

This Corgi-Hound Mix Could Be Your ‘Buddy’

Photobomb Fun at McArdle’s for a Good Cause: Adopt-A-Dog