The Mondschein family of Greenwich are what’s known in the rescue community as foster-fails.

They loved their rescue black lab Sampson so much they decided to foster a female black lab named June through Double Dog Rescue, a 501(c)3 that specializes in connecting southern dogs to northern homes, though they didn’t think the name suited her.

June became “Juju.” And then “Juju” became “Lulu.” And it stuck. And so did she. 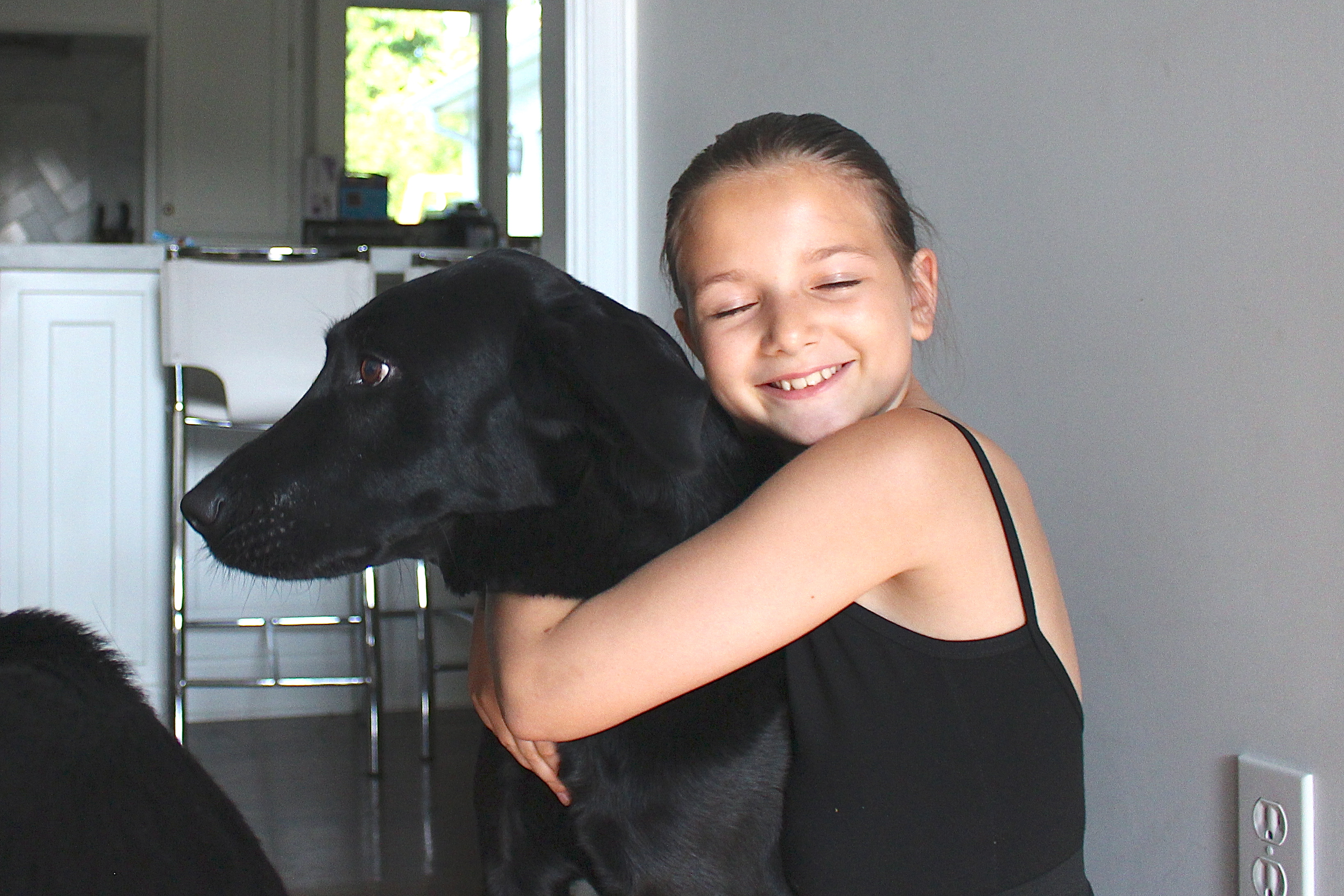 Lauren Mondschein with Lulu, her rescued Alabama black lab at home in Greenwich. Lauren is a ballerina and, fittingly, Lulu is very graceful and has extra long legs. Credit: Leslie Yager 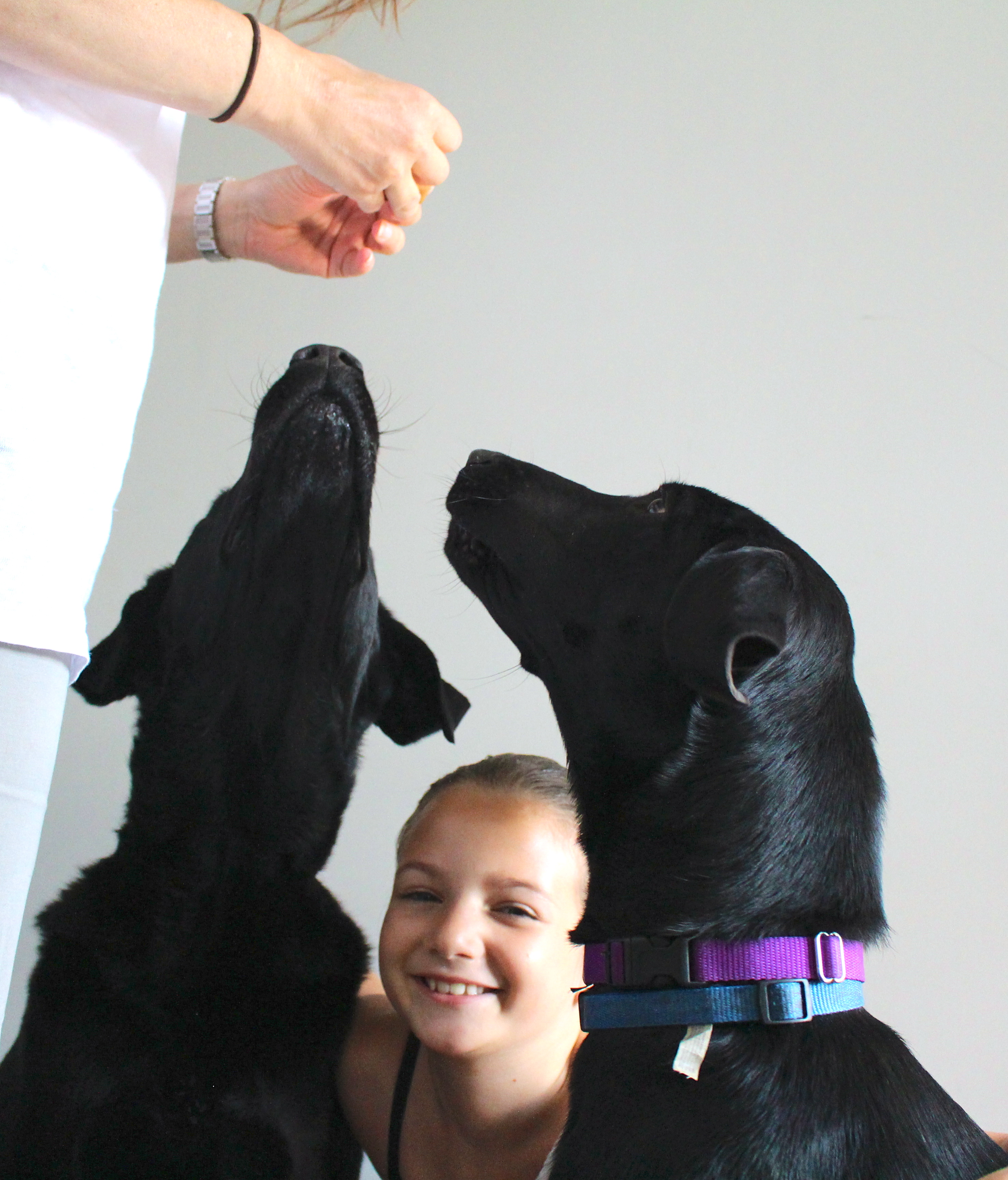 Lauren Mondschein hugs her best friends as Carol Mondschein breaks a treat in two for the well-behaved black labs,. The dogs were both rescued from Alabama with the help of Double Dog Rescue. Credit: Leslie Yager

“After a day we knew we couldn’t give her up,” said Carol Mondschein.

Carol, who works half days as a physical therapist at Stamford Hospital, grew up with rescue dogs though the trend of imported southern dogs had not begun in earnest when she was a young girl.

Growing up in Huntington, Long Island Carol’s mom picked up a stray Maltese she found running along the highway. After a fruitless search for the dog’s owner, the stray became the family pet.

“We’ve done such a good job with the Animal population control program that people aren’t finding puppies up here,” said Ray Connors, supervisor of the state Dept of Animal Control, which is part of the Dept. of Agriculture in Hartford. Reached by phone, Connors said most of the dogs coming up from the south are puppies, though he said the import numbers have dropped slightly. “We see the numbers have come down since a high point of 15,000 coming in a year, but the number has dropped by about 300.” 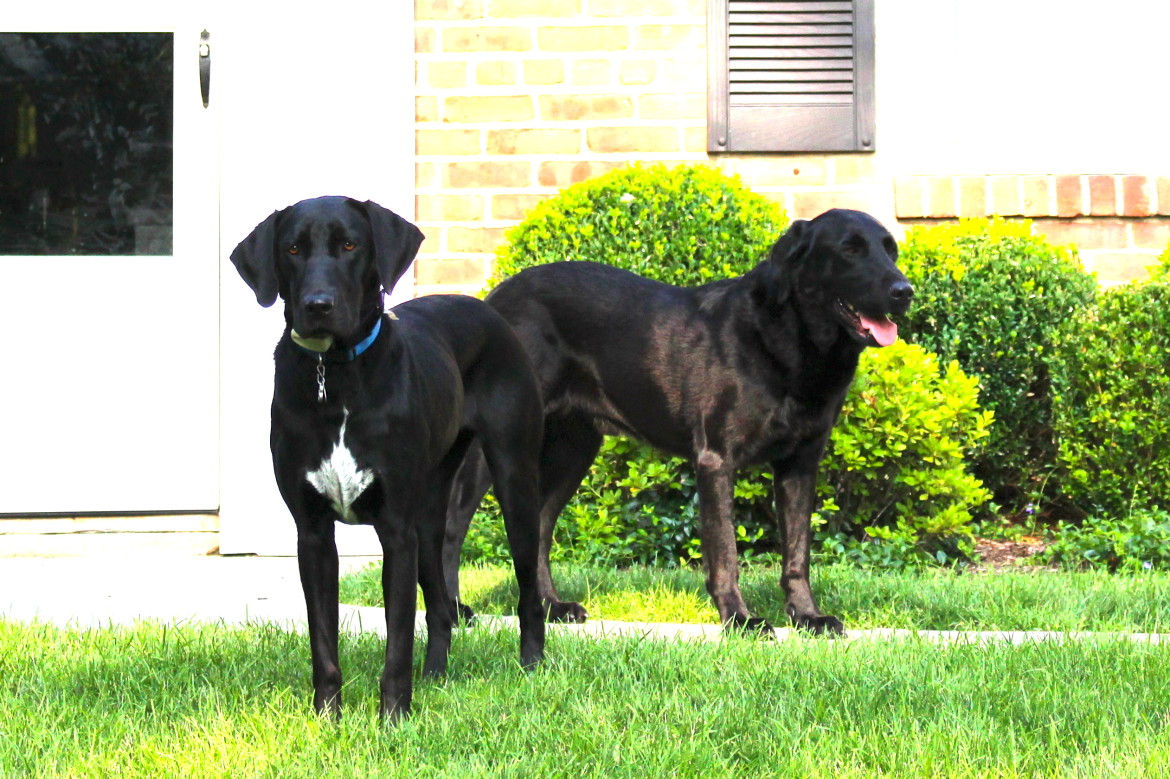 Aware that pet store dogs come from puppy mills, Carol said described her recent frustration to hear an acquaintance talk about having “rescued” a dog from a pet store when tens of thousands of puppies in the south are euthanized due to overpopulation.

Mondschein fell for her first black lab, when her husband, then boyfriend, Harold, adopted Bennett in upstate New York when he was a student. Bennett’s original owner rejected him as a bird dog, or “field dog.” And Bennett had hip dysplasia.

When Harold was told he couldn’t keep Bennett where he was living, the big black lab joined Carol in New York City.

Southern Black Labs and Black Dog Syndrome
Though Bennett lived to 15, he left the family brokenhearted and Carol said it took a full two years before she was ready for another dog, but she knew it had to be a black lab. And by then she had become aware of Black Dog Syndrome. 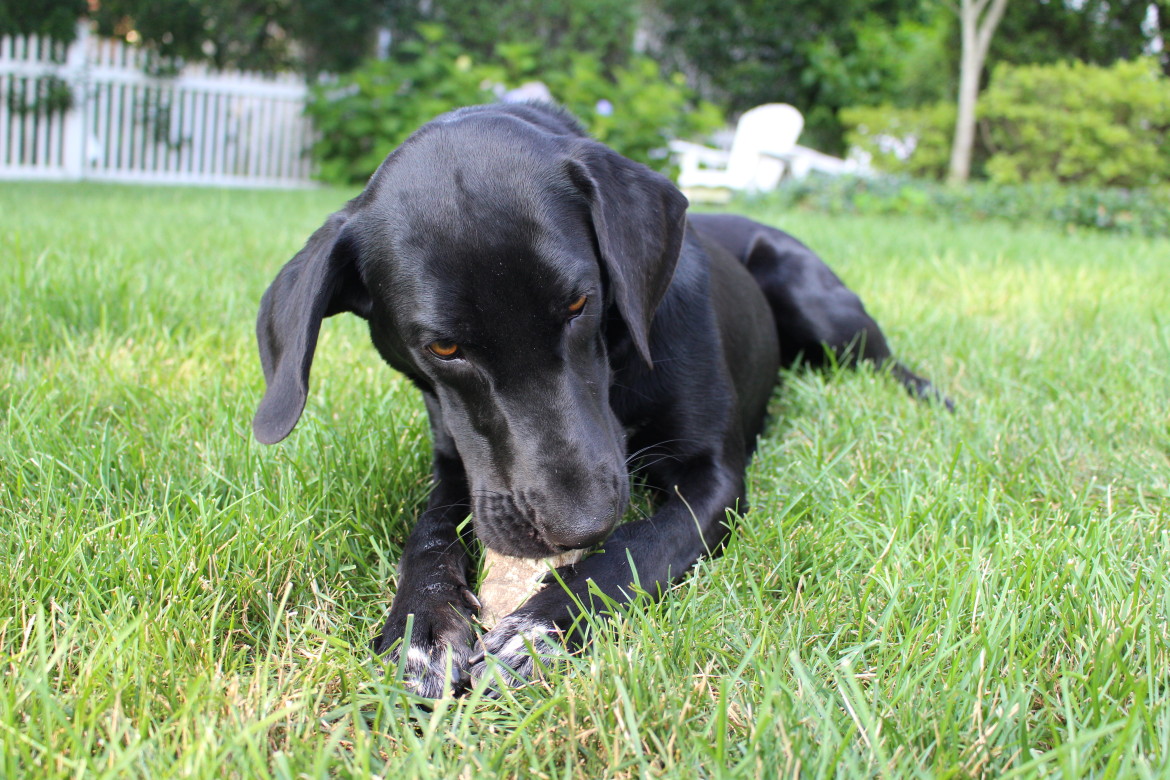 Black dogs in southern states are euthanized at a high rate for three reasons. Black is the dominant gene color, so they outnumber other color labs. Second, with the reluctance to spay and neuter in the south, and the problem of roaming dogs, there are countless litters of unwanted puppies. Add to that the trend of using the internet as a tool for dog adoption, the black dogs are passed by because they are difficult to photograph.

“People scroll right past them when they’re looking at dogs for adoption online,” said Heather Trocola of In the Lead Dog Training in Norwalk.”It’s hard to see their expressions and they can appear mean.”

Like many others in the north, stunned to learn how all kinds of dogs are put down because of space issues and overpopulation, Carol knew she could find a perfect dog and save a life at the same time.

“People need to know you can rescue any type of dog,” said Carol. “You don’t need to go to a pet store.” She recalled doing her homework and finding a reputable rescue group, Double Dog, and how Sampson was so gentle the moment he came off the transport.

Sampson, who Carol said has Bennett’s spirit came up from Alabama through Double Dog Rescue, a group she has been very impressed with. “It’s over 100° down there, and there’s no air conditioning,” Carol said of Alabama strays that wind up in shelters.

Lauren Mondschein, a rising 4th grader at North Mianus School said the house had been a bit quiet for her liking before Sampson arrived and teased her mom for how often she vacuums the house. Lauren and Carol both joke about the ubiquitous presence of lint rollers in the house, but say it’s worth the effort. 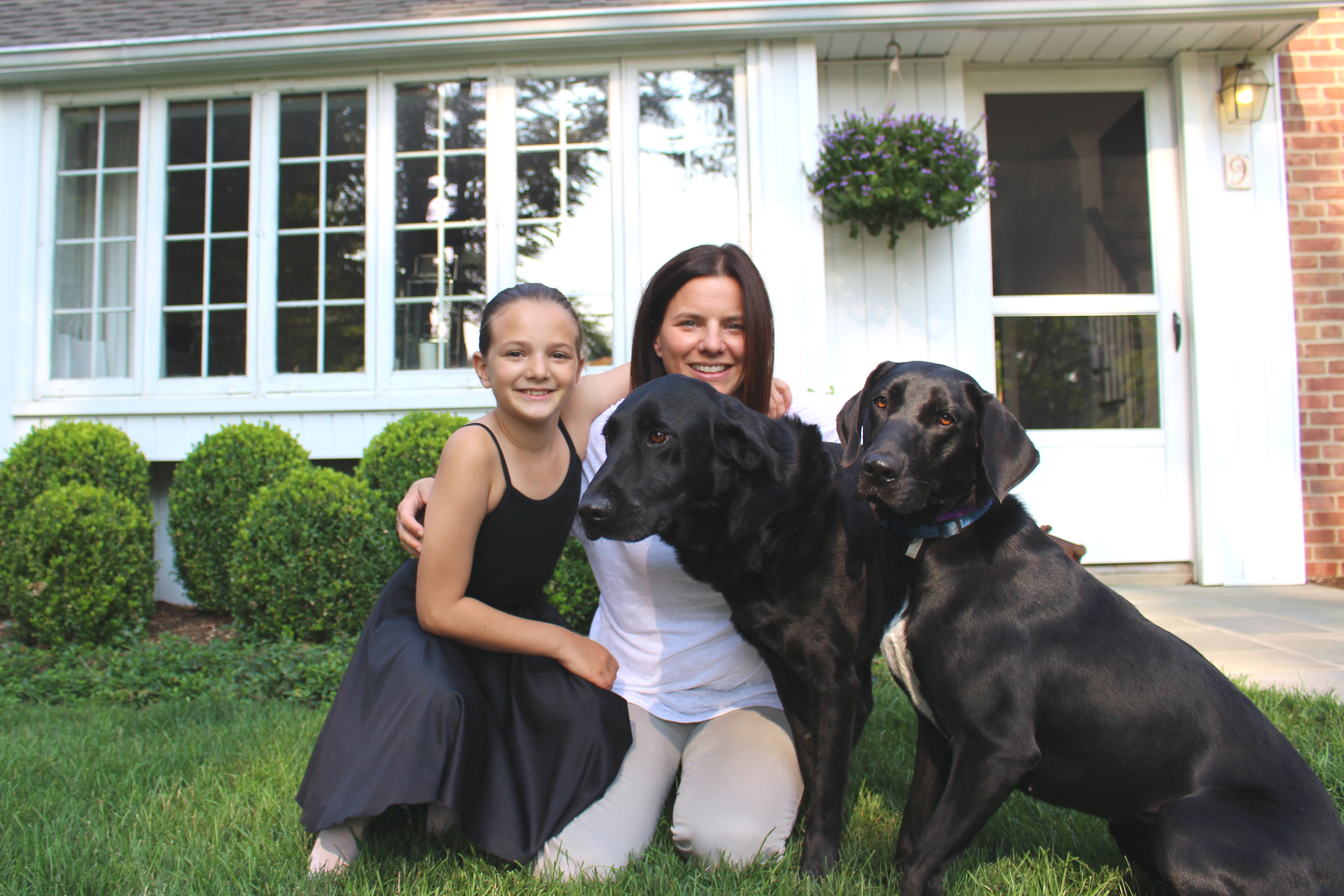 Carol and Lauren Mondschein at home with Sampson and Lulu. Credit: Leslie Yager 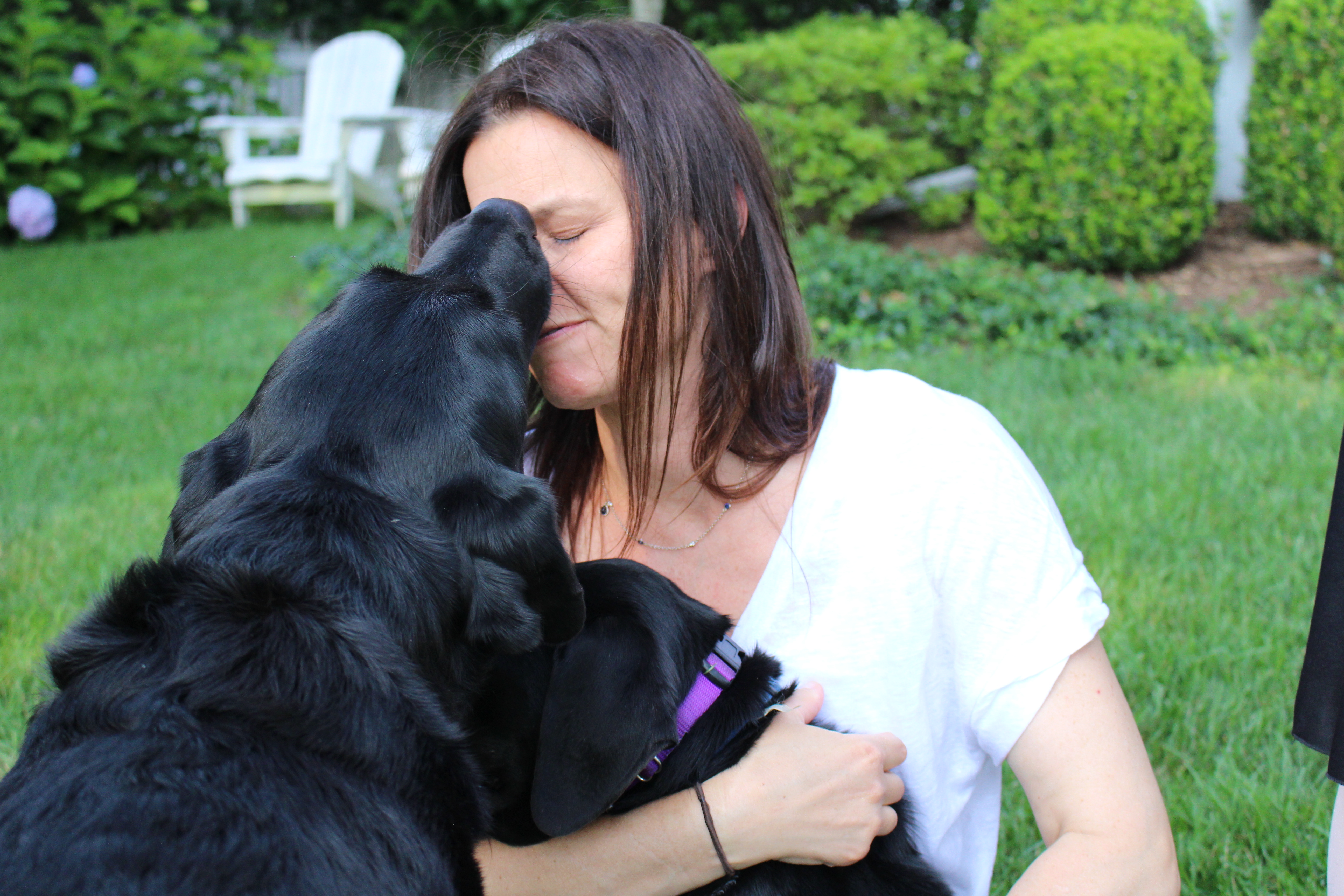 Sampson and Lulu are both affectionate and sweet, though Sampson flinches when approached off guard. The Mondscheins think someone must have kicked him more than once in his previous life. Credit: Leslie Yager 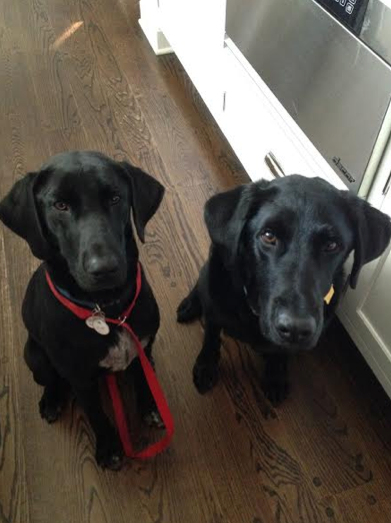 Sampson and Lulu in the Mondschein’s kitchen in Greenwich. Credit: Carol Mondschein