On Friday First Selectman Fred Camillo switched his daily press call from telephone to Zoom, where some participants were live in their home offices, or in the case of Camillo, a backdrop of a baseball stadium.

In addition to Camillo, participating on the call was Diane Kelly, COO of Greenwich Hospital.

Camillo said per the town’s health director, 185 Greenwich residents have tested positive for COVID-19, up from 165 on Thursday.

To date, 1,895 people have been tested at Greenwich Hospital’s outpatient tent, with 675 testing positive, though those numbers include people from Westchester and other Connecticut towns.

Greenwich Hospital said as of noon Friday there were 99 COVID-19 patients were being treated; 84 patients had recovered and been discharged.

Per the state, Greenwich had 189  (four more than the health dept director reported earlier in the day).

“We are hovering around that high 90s number of inpatients, and it’s important to note we’ve discharged 84 patients,” said Diane Kelly, COO of Greenwich Hospital. “Many patients are coming in, successfully having treatment and returning to their homes.”

Greenwich Hospital has 174 licensed beds and can phase 84 more.

Kelly said the Yale New Haven Health System is planning for off-site locations for patients, using “a regional perspective,” but declined to elaborate on locations of alternative sites.

She said there are 26 patients in critical care in the hospital’s ICU, and the hospital is expanding staff.

“The majority of our expansion is getting ICU nurses,” Kelly continued, adding that the hospital has properties to house out-of-town staff, including several from the New Haven area and the Lawrence & Memorial Hospital in New London.

“We are seeing COVID-19 patients requiring a higher length of stay than a typical patient for an inpatient stay. It’s coming out to be a six to ten day stay, which is higher than normal length of stay,” Kelly said.

Kelly said there were no more deaths of Greenwich residents since Wednesday, when three deaths were reported, thought Camillo said a family friend from Greenwich had died.

Kelly declined to give an update on the condition of the nine physicians who tested positive for COVID-19 at Greenwich Hospital, which was announced Monday by Marna Borgstrom, CEO of Yale New Haven Health. 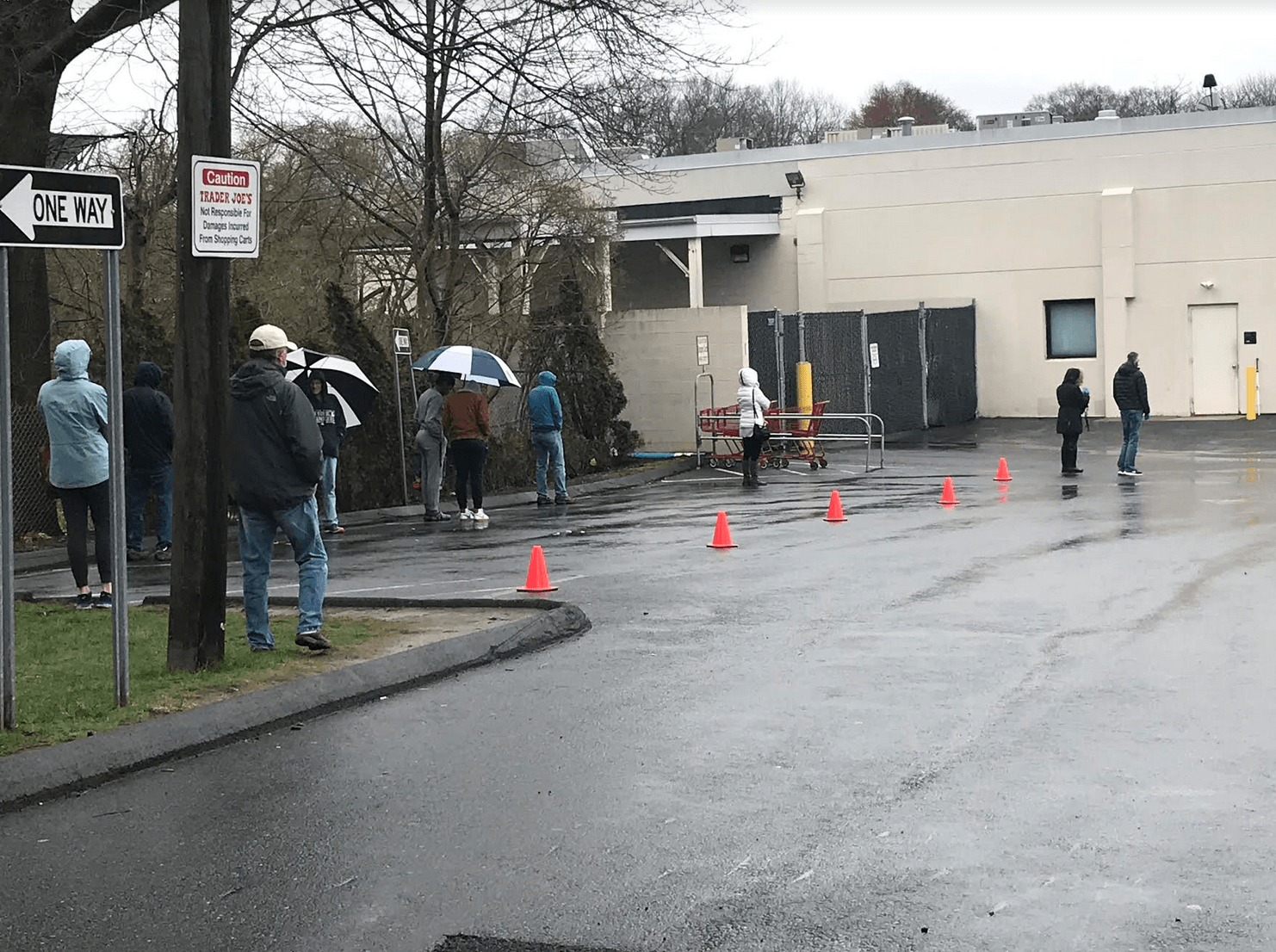 Customers outside Trader Joe\’s on High Ridge Road on Friday afternoon wore face masks and separated by 6 ft as they waited to enter the store. Photo: Leslie Yager

The order limits the use of those rentals to essential personnel who might be unable to travel home and discourages out-of-state visitors.

Greenwich Hospital said that people who want to donate anything include home made masks, should reach out by email to [email protected] and the items will go to the regional operations center and from there will be dispersed to wherever the needs are in the Yale New Haven Health system.