Greenwich Police spoke to the management of the facility. They are adamant that they currently have more than enough PPE supplies on hand for their staff and patients. They related that the items seen in the video were NOT actual PPE, but were painting coveralls that they had procured in case they could not obtain enough proper protective gowns. They reported to us that these painting coveralls remain on the property and were just being secured from being improperly used or pilfered.

There has been much dialogue about this issue, but unfortunately some of it has been threatening and exhibiting prejudice. We ask that the understandable concern for our most vulnerable members of the community be expressed in a respectful manner. As we previously mentioned, we continue to monitor the situation and consult with the appropriate state authorities. No one has been found to be at risk.

Original story, 3:35pm: Greenwich Police issued a statement Friday afternoon saying their department was aware of a video circulating on Facebook that purports to show personal protective equipment (PPE) supplies being removed by an administrator from a skilled nursing facility in Greenwich.

A post on the Facebook page of RegalCare on King Street, where the facility’s tagline is, “Rehab like royalty at RegalCare in Greenwich,” defends the facility against any suggestion that an administrator is removing PPE, saying the boxes contained painters coveralls that the administrator purchased as a backup just in case a more appropriate PPE couldn’t be sourced. 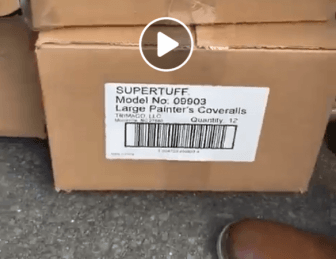 In the video, which began circulating on Facebook on Thursday night, a woman films as she follows behind as a maintenance employee wheels a stack of boxes labeled Large Painter’s Coveralls from the building to the parking lot as he walks alongside a RegalCare administrator.

The woman making the video repeatedly calls out to the administrator Eli Elefant asking why the supplies are being removed.

“These are the supplies we’re supposed to be using for the virus, now it’s going out the building, going to a car,” she can be heard saying. “We have people with the virus in the building.

As of Friday afternoon the video had been shared 1,300 times.

On their Facebook page, RegalCare defended the actions of the administrator, and the charge that there are COVID-19 cases in the facility.

“At this time, there are no reported cases in our facility, another untruth being spread,” RegalCare posted.

“The comments on the video are completely inaccurate…When concerns began arising about Coronavirus, our extremely dedicated Administrator took it upon himself to purchase extra supplies for his staff from his own personal money out of concern that supplies would no longer be readily available. This was in addition to all the necessary PPE that management has been circulating throughout the building. The boxes are filled with painting coveralls, not PPE, as evident in the video.”

Greenwich Police Lt Zuccerella released a statement to the media Friday afternoon  saying police had advised the Connecticut Dept of Public Health about the concerns, noting that the facility is licensed by the State of Connecticut.

Zuccerella said the police were not aware of any criminal violations to investigate, but continue to monitor the situation.

“It is our understanding that the management of the facility is cross-leveling supplies to other facilities they operate,” Lt Zuccerella said in the statement. “This particular facility is privately owned and operated.”

A second response from RegalCare on Facebook said that rather than post the video on social media, the employee should have asked for clarification.

“The reason the coveralls were purchased in the unfortunate case that we were unable to get the correct equipment. Thankfully we were able to get the proper PPE for the facility, and therefore these coveralls are not the best option over the better PPE we received.  Sadly with all the scary reality, we are facing, it makes sense why employees who are working so hard would be hyper-vigilant about their safety, as they should. We just wish they would have asked us to clarify and explain what the scenario was instead of posting false information on social media.”

Asked in a comment why the administrator didn’t simply explain where the boxes were going, RegalCare replied, “There was much conversation prior to the starting of the film. He had tried to explain but he was actually nervous with how they were acting.”

In their statement police reminded residents to abide by federal, state and local governments guidelines including to ‘stay safe, stay at home’ and to maintain a social distancing of at least 6 feet while encountering others outside the household.

“These guidelines protect the most vulnerable members of the community and can quite literally save lives,” the police said. “These are trying times, but together we can accomplish anything.”