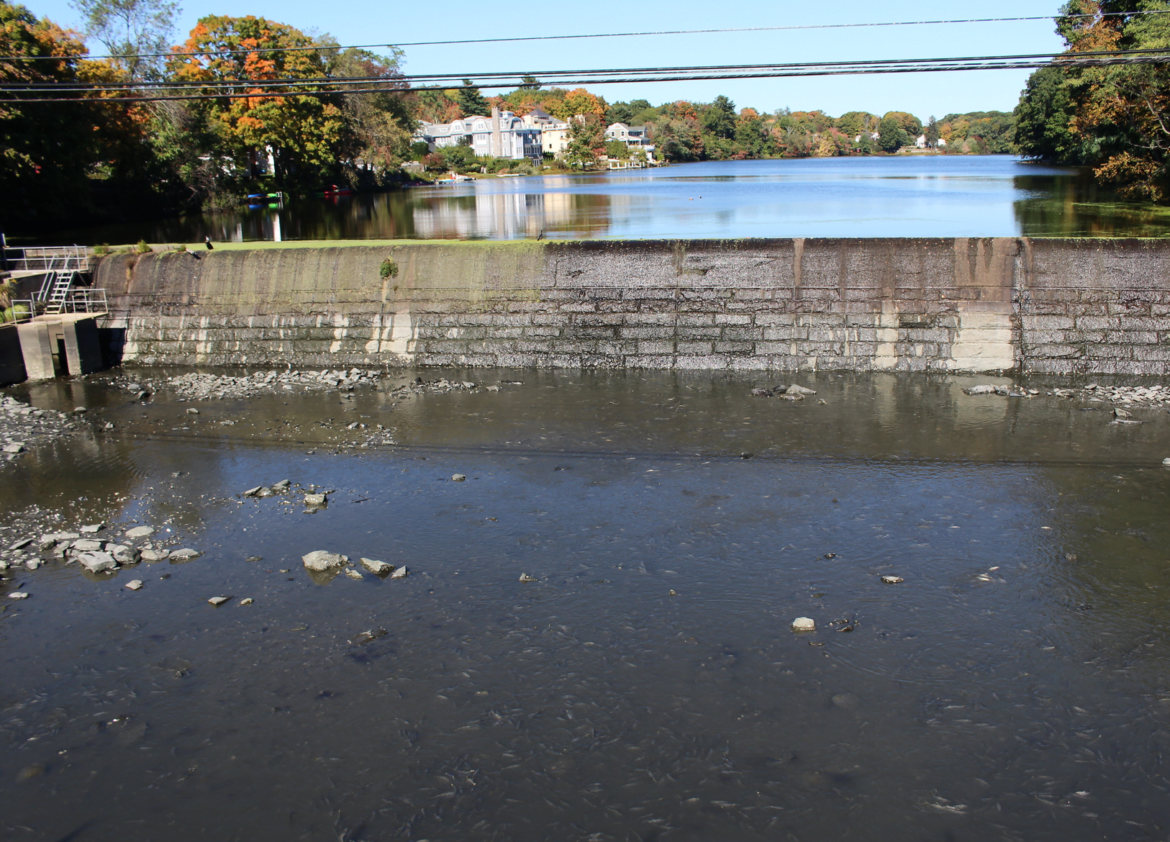 Fish in shallow water just below the dam on the Mianus River by Route 1, Tuesday, Oct 11, 2016 Credit: Leslie Yager

Update, Oct 12, 2016: Schools of Bunker were spotted in shallow water under the Mianus River Bridge on Route 1 in Cos Cob on Tuesday.

The fish couldn’t make it to the fish ladder to reach deeper water and were dying. It seems the prediction of Kenneth LeClerc, Emergency Response Coordinator for the CT DEEP, interviewed last week by GFP, may just be accurate.

“I would not be surprised if it gets worse before it gets better,” LeClerc said of the die offs.

Original story: October 6, 2016 This summer’s drought has impacted more than Greenwich residents, who are in the midst of a watering ban.

The summer series of fish kills in Bruce Park and Binney Park are also related to the lack of rainfall.

In a phone interview on Wednesday, Joe Schnierlein, Research and University Liaison at the Maritime Aquarium at Norwalk, said this summer’s drought depleted oxygen from salt water, leading to dangerous conditions for Menhaden, known as “Bunker.” 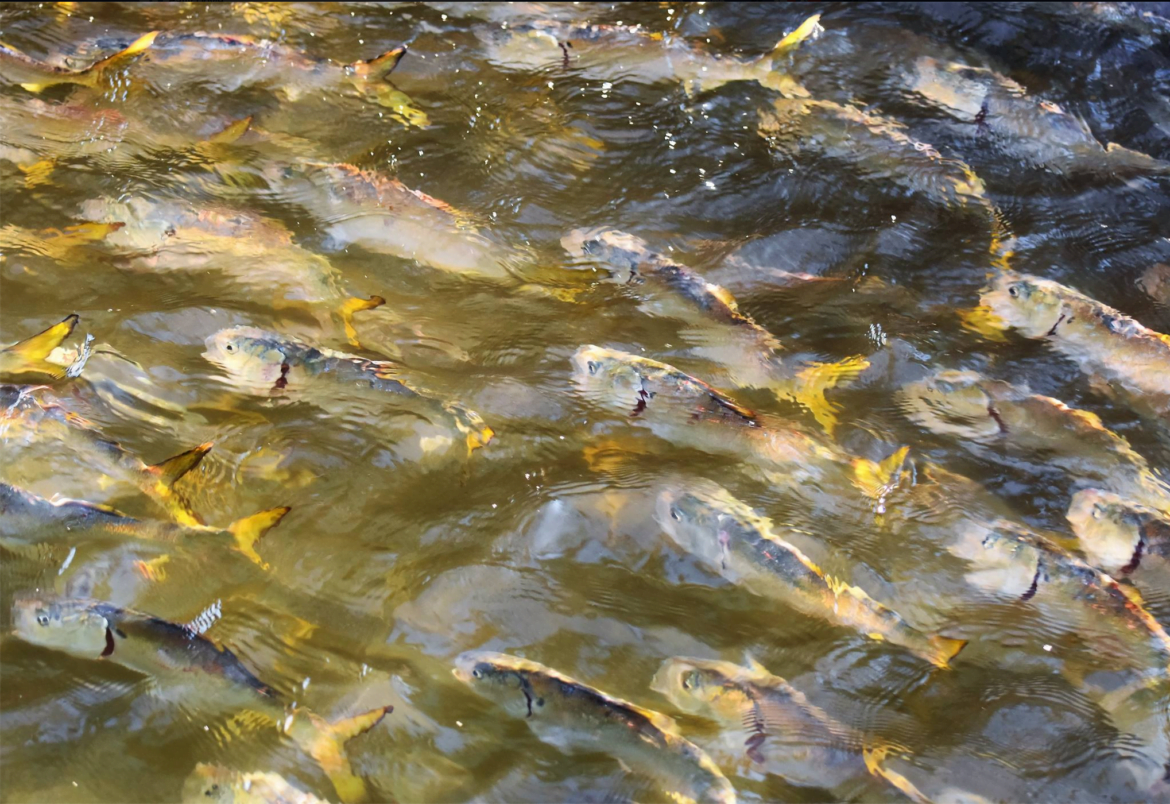 Schnierlein said that with the warm summer weather and very few storms, there wasn’t a lot of fresh water running off the land to cool off shallow areas of water.

“Shallow water warms up fast, especially in a hot summer,” Schnierlein said. “As soon as it gets above 70°, you see the waters ability to retain dissolved oxygen decreased.”

Also, the lack of rain increased the salinity of salt water. “Salt water holds less oxygen,” he said, adding that the absence of storms took an additional toll. “Good storms with wave action and pounding puts oxygen back in the water.”

Schnierlein said that at the Maritime Aquarium at Norwalk they recorded temperatures close to 80° by their docks.

He said that under these conditions, at night there is no photosynthesis. “Algae and every other living thing in the body of water are using up oxygen,” he said.

“Bunker lose their ability to think and act rationally when they are deprived oxygen and some even swim to where there is even less oxygen. That’s when they start dying.”  – Joe Schnierlein

Even worse, he said, when Bunker panic they consume even more oxygen. “When they panic their metabolic rate goes up and they use more oxygen,” he said.

Schnierlein said that in Norwalk the Bluefish patrol at the mouth of the Norwalk River. “They love the Bunker. So do Striped Bass.”

Asked why Bunker likely turned up dead in Binney Park this summer while goldfish, eels and turtles were unharmed, Schnierlein said,” Goldfish can handle really low oxygen levels. Eels too. And turtles are air breathers, so they don’t care about the oxygen in the water.”

Greenwich Conservation Commission director Denise Savageau agreed. “This is a single species event,” she said, adding that although there was a small oil spill that originated on I-95 last week, and the state DEEP Haz Mat came to set up booms in Binney Pond, the causes of the fish kills in Greenwich are unrelated.

“If this were a toxic environment more species would be impacted,” she said. 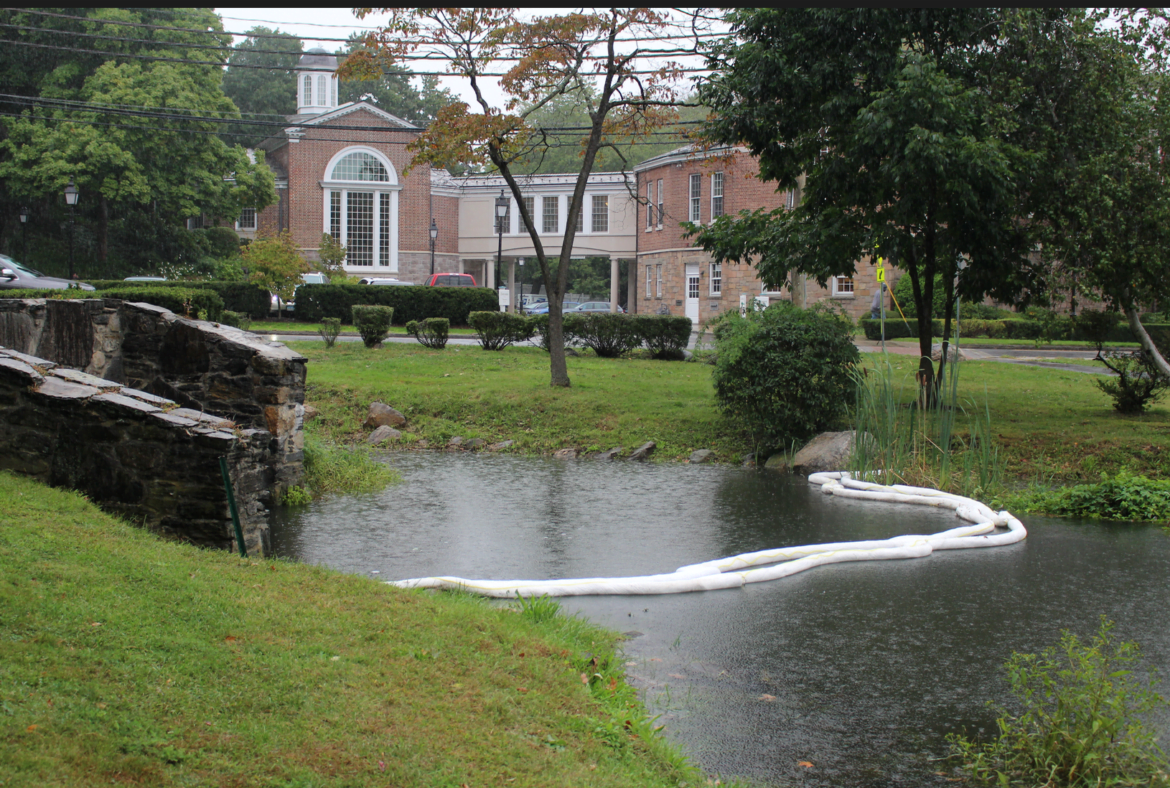 Following an oil spill from an unknown truck on I95 at exit 5, the State DEEP set up booms set up where water flows into Binney Pond adjacent to the Perrot Library. Friday, Sept. 30, 2016 Credit: Leslie Yager

Reached by phone, Kenneth LeClerc, Emergency Response Coordinator for the CT DEEP, said the booms set up in Binney Park last week were in response to an oil spill from an unknown truck on I95 by exit 5.

“Until we get some substantial rain, we won’t be able to get the oil spill to wash out,” he said. “But the Bunker die-offs are unrelated. Unless there is a massive spill, the oil just sits on the water’s surface. It doesn’t kill the fish. It would not be good for ducks, but the fish just swim happily under the water’s surface.” – Kenneth LeClerc, Emergency Response Coordinator for the CT DEEP

“You can’t even flush it out by opening up the fire hydrants,” he said, referring to the drought restrictions. But also, he pointed out that if the oil spill was flushed out with water from hydrants it would overwhelm Binney Pond with fresh water, which the salt water fish can’t tolerate.

For now, LeClerc said the oil is slowly starting to filter out. “Until we have a rainstorm we’re stuck.”

As for the Bunker dying, Mr. LeClerc said, “I would not be surprised if it gets worse before it gets better.” 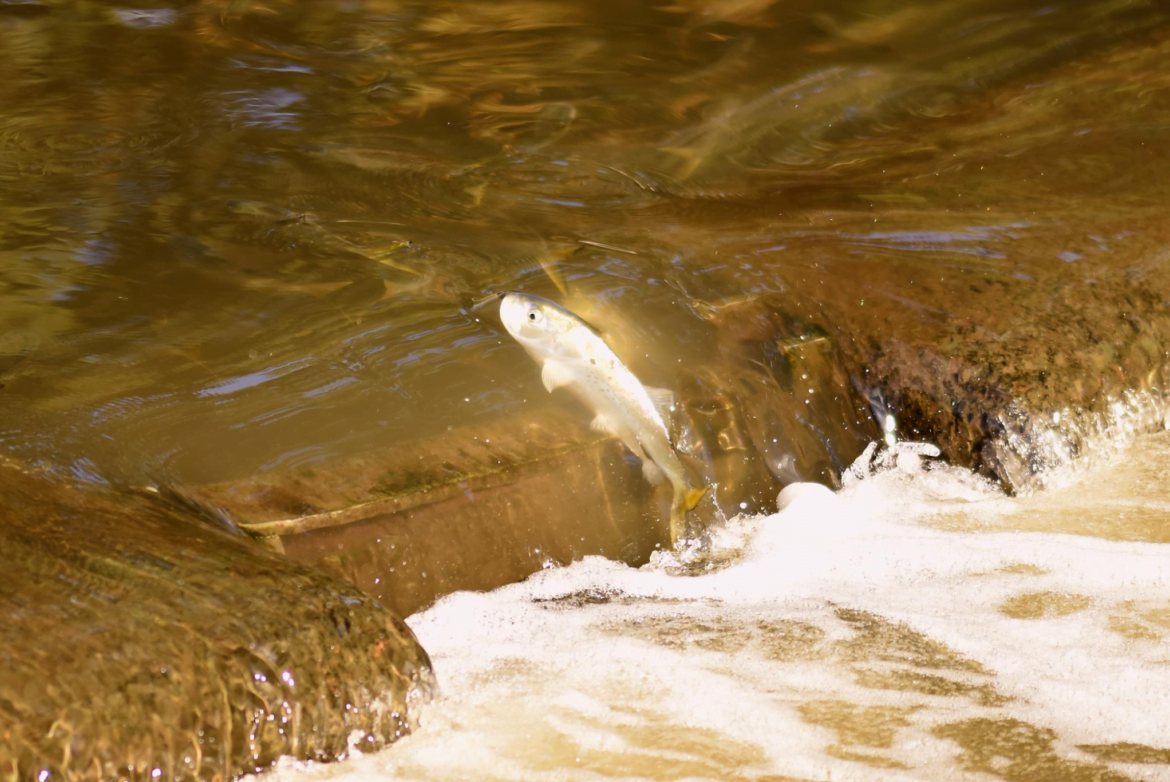 One fish made it over the dam in Binney Park.Credit Patty Doyle, Oct 4, 2016 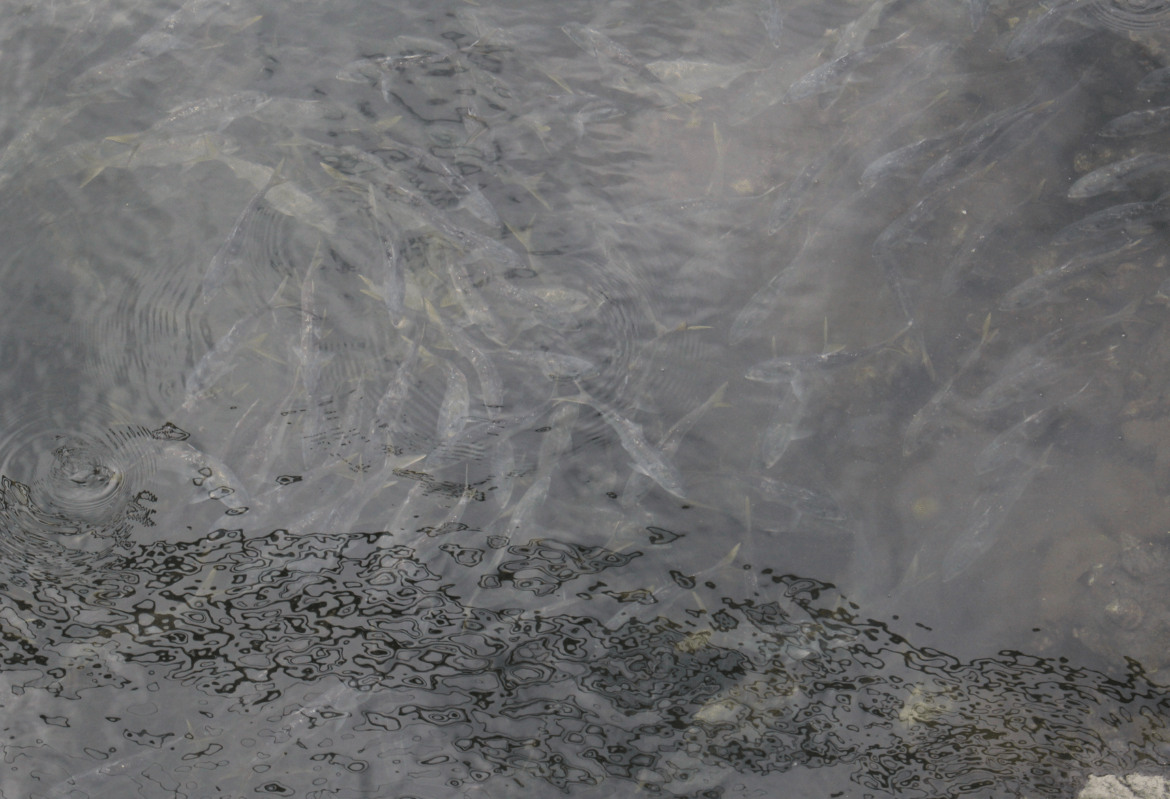 Large school of Bunker swimming tight circles in shallow water on the south side of culvert over Bruce Park. Oct 4, 2016 Credit: Leslie Yager 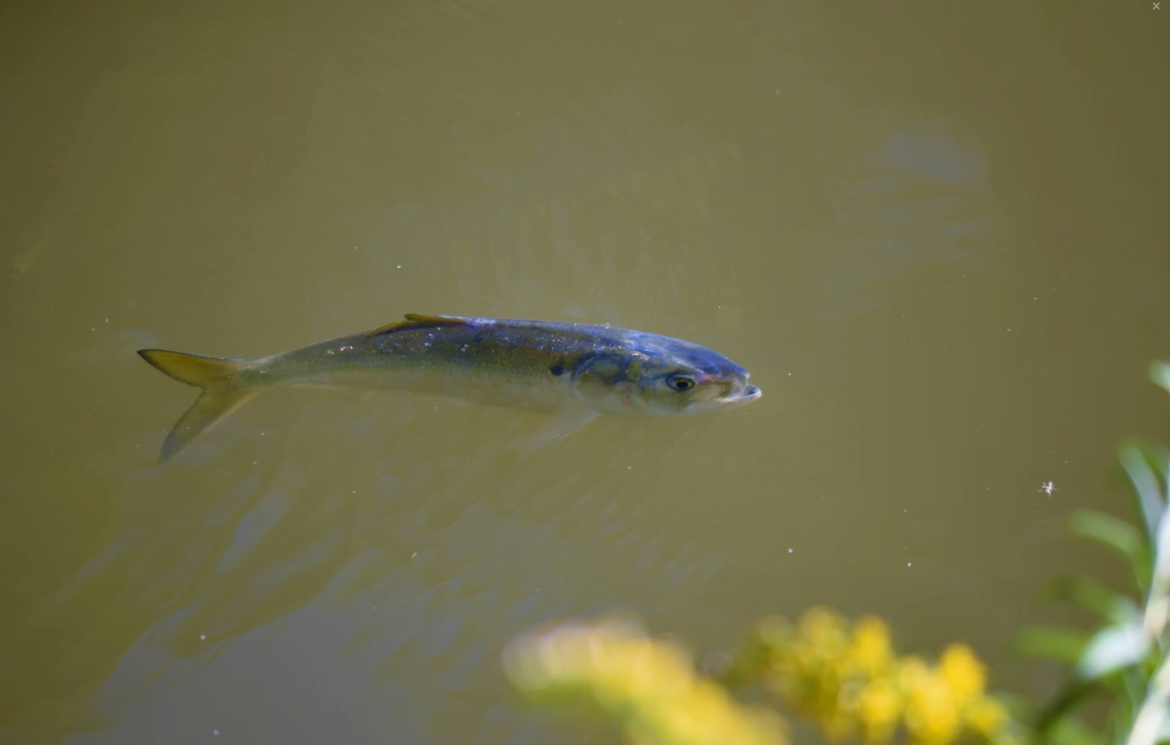 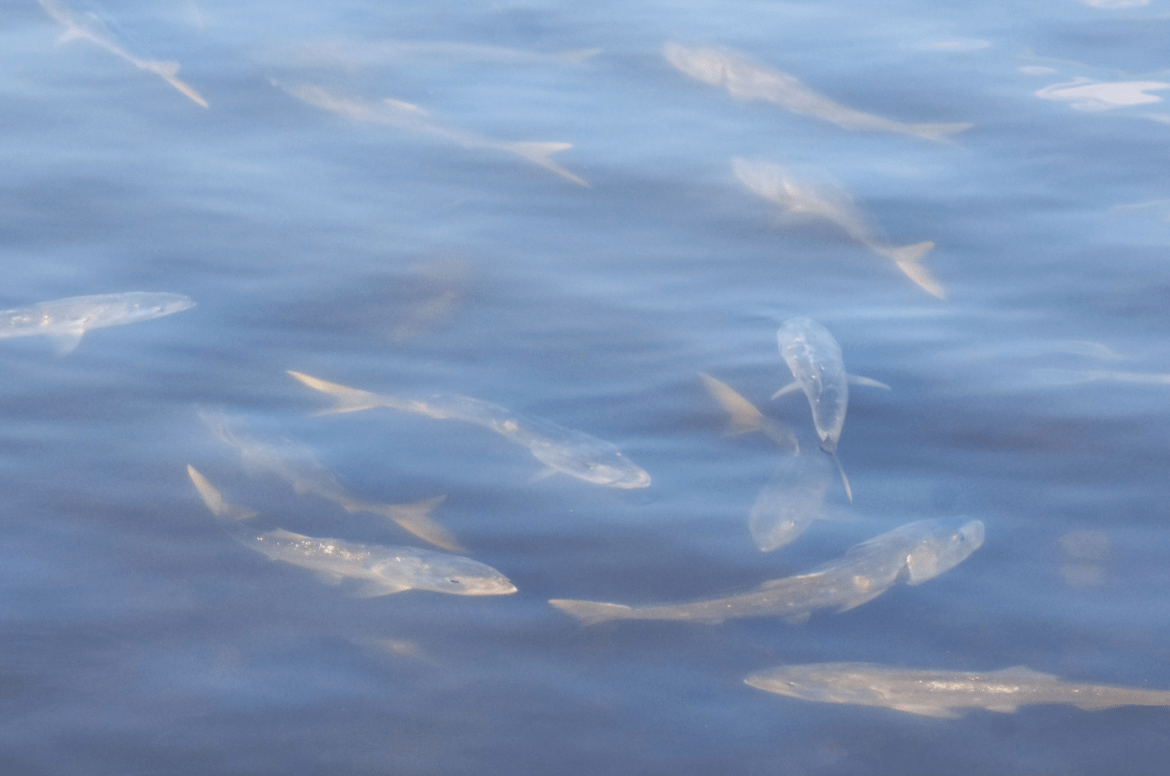 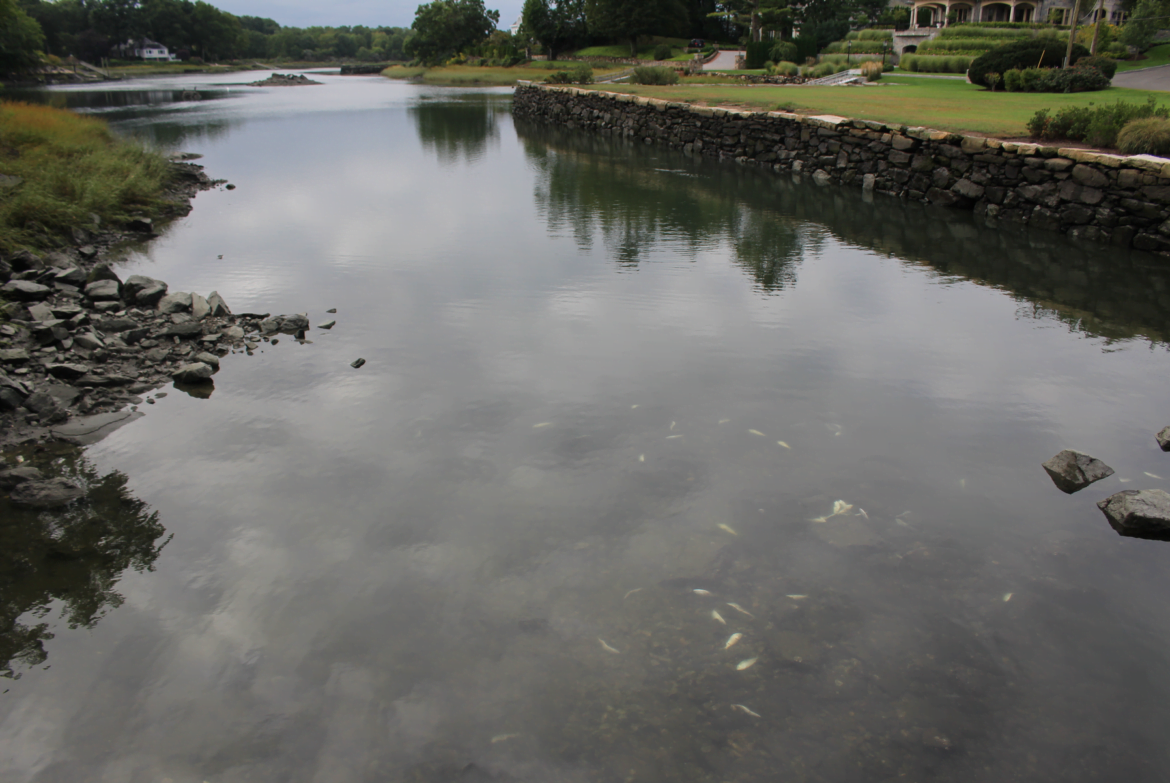 After Sea Lice Come the Jellyfish at Greenwich Beaches