On Friday night, members of the Keystone and Torch Clubs at the Boys & Girls Club of Greenwich gathered in the game room for a presentation  from Greenwich Police entitled “Know Your Rights.”

The panel, which included Chief Jim Heavey, Boys & Girls Club Detective Steve Hickey who was formerly a longtime member of the police department, Sgt Sean O’Donnell, Detective Michael Rooney and Carlos Franco who is a member of the Special Victims Division, but mostly familiar in town at the School Resource Officer at Greenwich High School.

The evening kicked off with the screening of two short but powerful videos produced by the Connecticut Police Chiefs Association. In fact, it turned out Friday was the premiere for the videos.

The first video was called “Breaking Barriers,” and focused on attitudes toward police. Chief Heavey said that in some communities the police and residents have bad communication, though that is not the case in Greenwich. He said the young people should feel comfortable talking to police. He said when he was on patrol he’s try to talk to young people, but sometimes they’d run when he approached them. 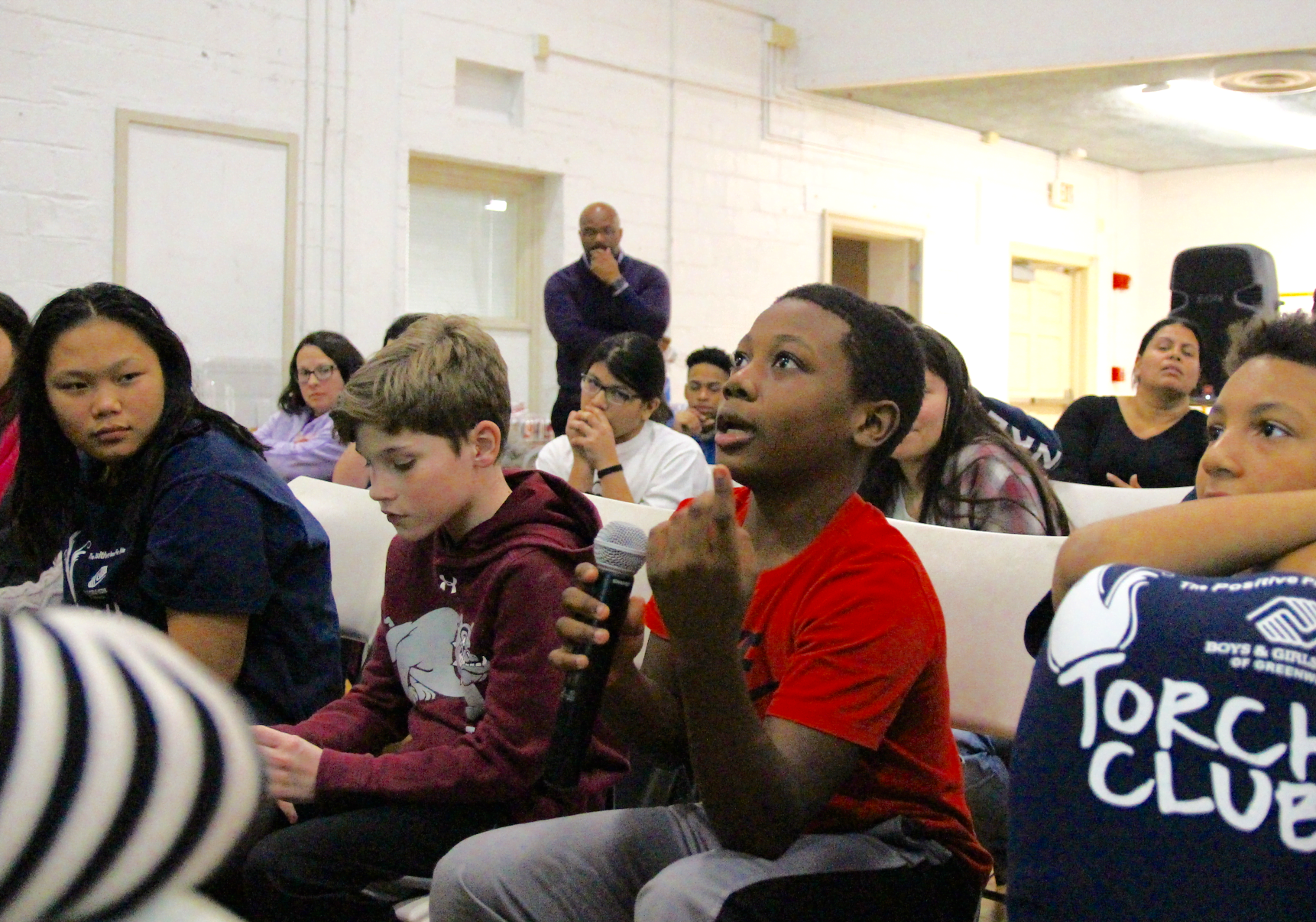 Brandon Auguste, a 6th grader at Western Middle School, asked the panel a question about how to behave during a police motor vehicle stop. Jan 19, 2018 Photo: Leslie Yager

The heart of the presentation revolved around motor vehicle stops, even though only a sprinkling of the Club kids had driver’s licenses. Most raised their hands when asked if they were in the car when their parent had been pulled over by police.

The video said an officer will signal a driver to pull over by flashing their emergency lights. It’s best to immediately pull over, and pull over as far as possible and open your car window all the way in order to be able to communicate with the officer when he approaches.  The video emphasizes the importance of not making sudden movements and to keep your hands where officers can see them.

“If I can’t see your hands in the car, I’m concerned about my well being,” said Sgt O’Donnell.

The panelists said it’s important to stay calm during a police stop and to keep your hands where officers can see them. Chief Heavey said the reason people shake hands when meeting is a longtime tradition stemming from the need to know another person isn’t holding a weapon.

“If you get stopped and you don’t think you did anything wrong, is it a good idea to argue with a cop? asked Chief Heavey? “No, it might even get worse for you.”

Heavey said almost always when police pull over a car, it is because the driver has done something wrong, like rolling through a stop sign, speeding, or not wearing a seat belt. “A police officer has to see a violation to pull you over,” Heavey said.

When the officer writes up the ticket, they make a note the driver’s attitude. The panelists said that a driver who is not calm, but nervous or angry is more likely to have something to hide.

Chief Heavey said that if an officer doesn’t treat you well during the stop, the time to complain is afterward. “When it’s over, you can complain about the circumstances of the stop,” he said.

Heavey said Greenwich Police gave out more tickets last year than the previous year. He said there was a correlation between the increase in summonses, motor vehicle stops and warnings issued, to the reduction in the number of accidents in town.

“That’s good for us because less people get hurt, and less motor vehicles get damaged,” he said.

A young person asked what police look for in hiring new officers. Chief Heavey said the main criteria are that the applicant have at least an Associate’s degree or military service. He also emphasized that a good attitude in a volunteer or work experience, “even stacking envelopes in a factory” or working as a camp counselor, is a good measure of work ethic and reliability police seek in a new officer. 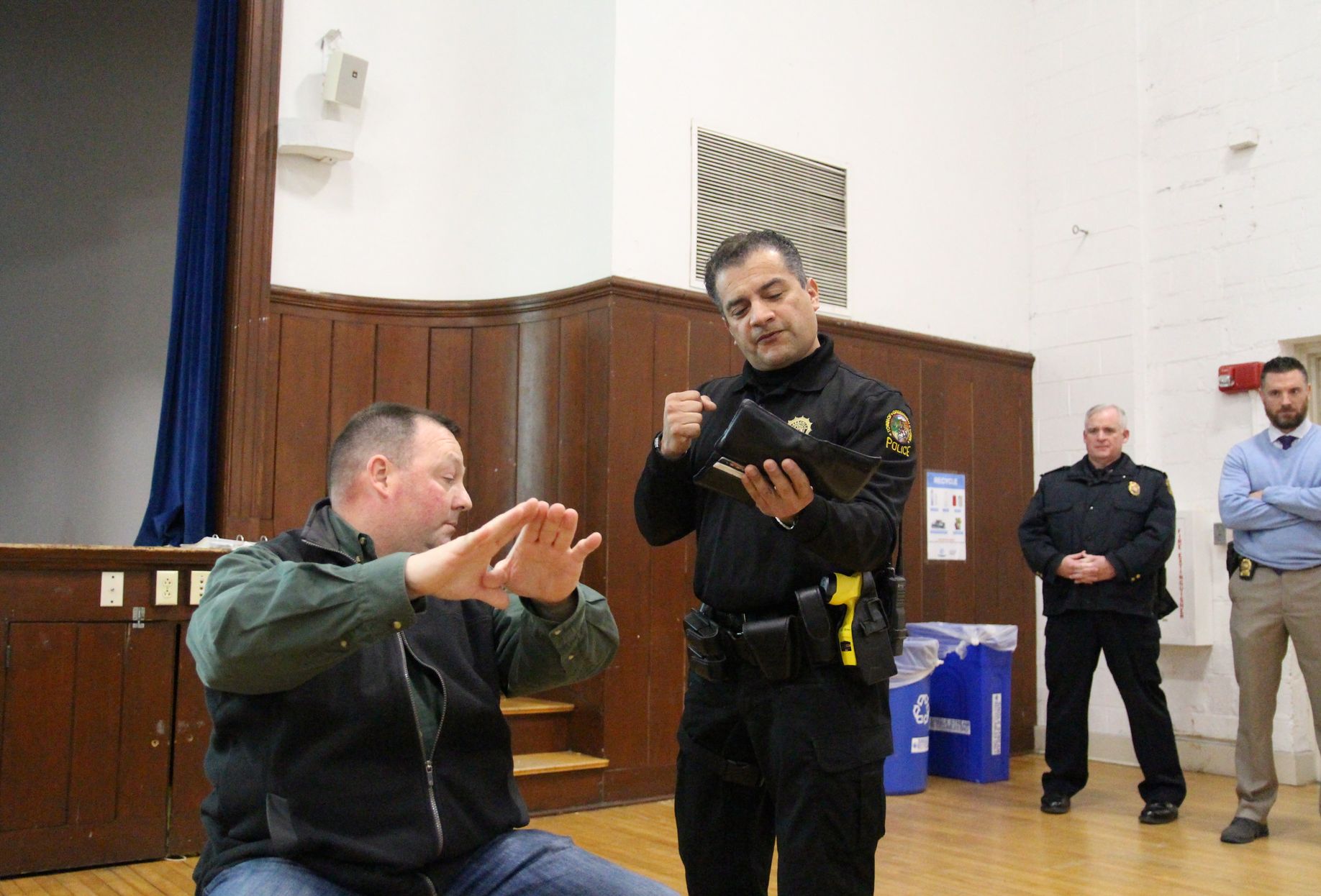 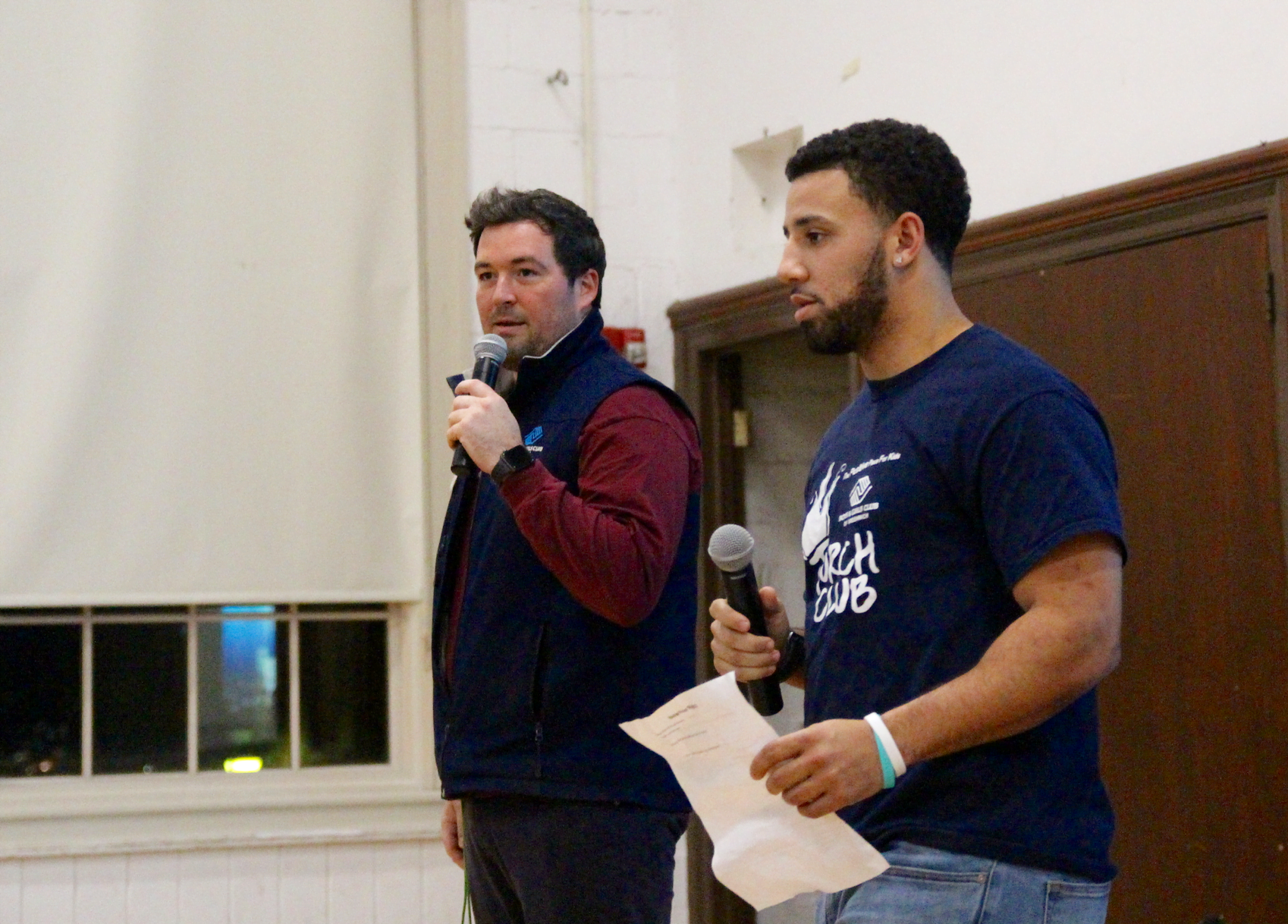 Ryan Accurso and Camryn Ferrara introduce youth to a panel of Greenwich Police at the Boys & Girls Club on Jan 19, 2018 Photo: Leslie Yager

During Q&A police were asked what is the biggest problem with teens. Officer Franco didn’t hesitate to say, ‘social media.’ Franco said all too often what starts off innocent on Instagram or Snapchat can escalate into threatening or inappropriate photos. He said young people who believe Snapchats disappears are wrong. “Once you post something, it’s there forever,” he said.

Police also explained when police are allowed to talk to juveniles. He said, for example, if a child has their iPad stolen, police can talk to them. “If you’re a witness we can speak to you.” But,” Franco said, “If you stole the iPad, you have rights and your parents have to be made aware of the alleged crime.” 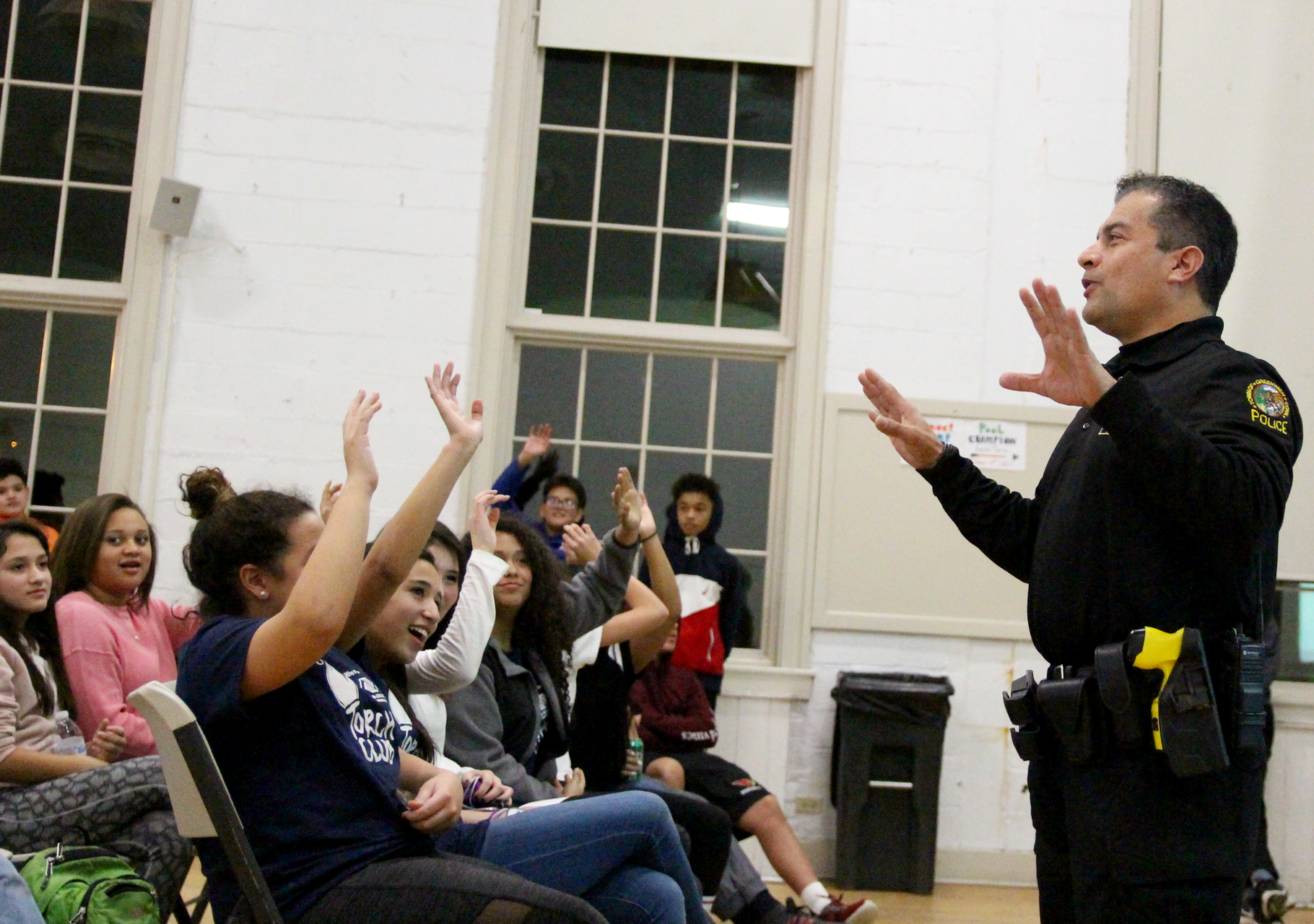 Asked about the worst part of their jobs, Chief Heavey said that would be when he arrests teenagers. He explained how the Juvenile Review Board (JRB) works, and how it is a diversionary program in which the teen signs a contract with the police and parents for restitution. “If you get arrested, don’t give up,” he cautioned. “It’s never as bad as you think. Admit your guilt. Show your remorse. Everybody makes mistakes.”

Police also explained the concept of probably cause and when they are allowed to search a car or a room in a house. They said if during a motor vehicle stop they smell marijuana, that is probably cause. In a situation the teens could relate to, police said that when there are four people in a car and police see or smell drugs, if no one in the car owns up to the drugs being theirs, all four may be arrested. The overriding message was to pick and choose friends carefully, especially, Heavey said, in the tween years prior to having driver’s licenses. 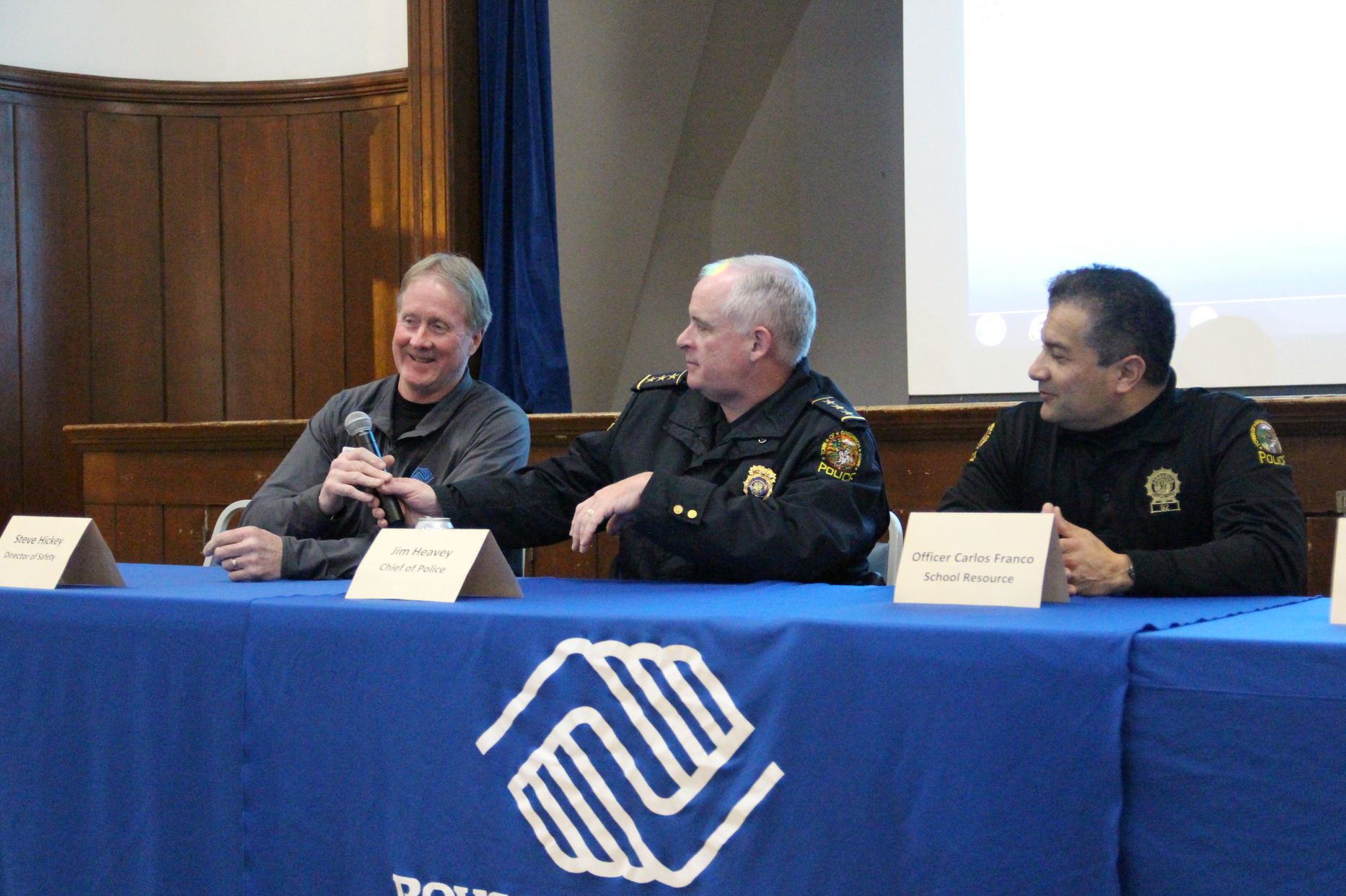