The Greenwich High School Cheerleaders fashion show, featuring members of the boys Football team, held their annual fashion show in a new venue this year. While last year the runway unfurled at Doral Arrowwood, this year’s show was at the Italian Center in Stamford.

Clothes were modeled by Greenwich High School cheerleaders and football players, with attire supplied by A Step Ahead and Zemos Men’s Store.

Many participants in the fashion show were seniors who admitted the experience was bittersweet as they complete their college applications and set their sights on the future. Though the four GHS captains — Estella Perrone, Victoria Sobeski, Courtney Nastahowski and Dakota Hirsch — said they have yet to decide where they’ll go next year, others smiled knowingly, hinting that their fingers were crossed for a particular school. 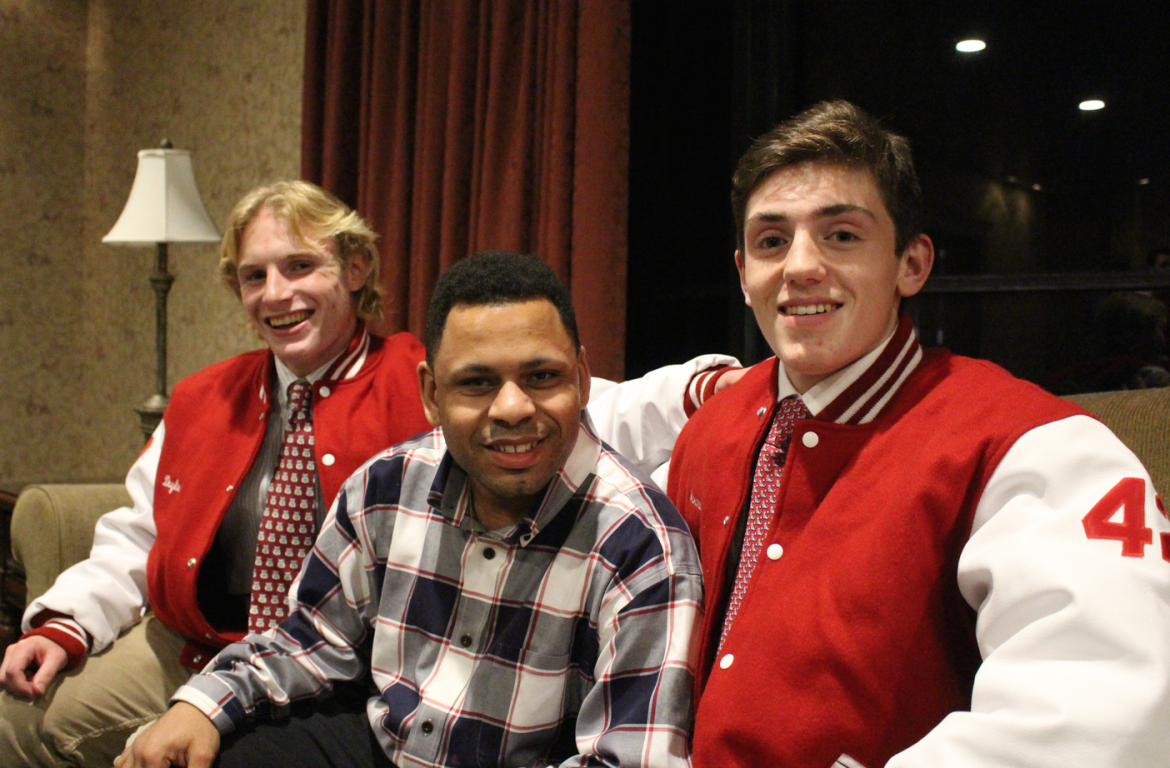 Andrew Marinaccio and Wyndsor Doyle shared a laugh with Joey Mancuso-Lewis at the GHS fashion show at the Italian Center on Nov. 15, 2015. Credit: Leslie Yager

After the show, Andrew Marinaccio and Wyndsor Doyle shared a laugh with Joey Mancuso-Lewis. Marinaccio said he became friends with Joey a couple years ago in the course of sharing a Pop-Tart at the YMCA.

The four cheerleading captains said they were grateful to their coaches and parents for organizing the fashion show and fundraiser, which they acknowledge was a ton of work.

About 20% of the proceeds from the event and silent auction were designated for March of Dimes. “Carm’s sister had a baby who was born prematurely,” said Stella Perrone, referring to Coach Carmelina Castiglione. The balance of the funds raised were designated for the cheerleaders to travel to Dallas in January to compete in Nationals.

The four captains explained what led up to the invitation to Dallas. “It’s all we talk about,” said Dakota Hirsch.

“We qualified last summer during a camp. The judges looked for over-all appearance, execution and difficulty,” said Victoria Sobeski. 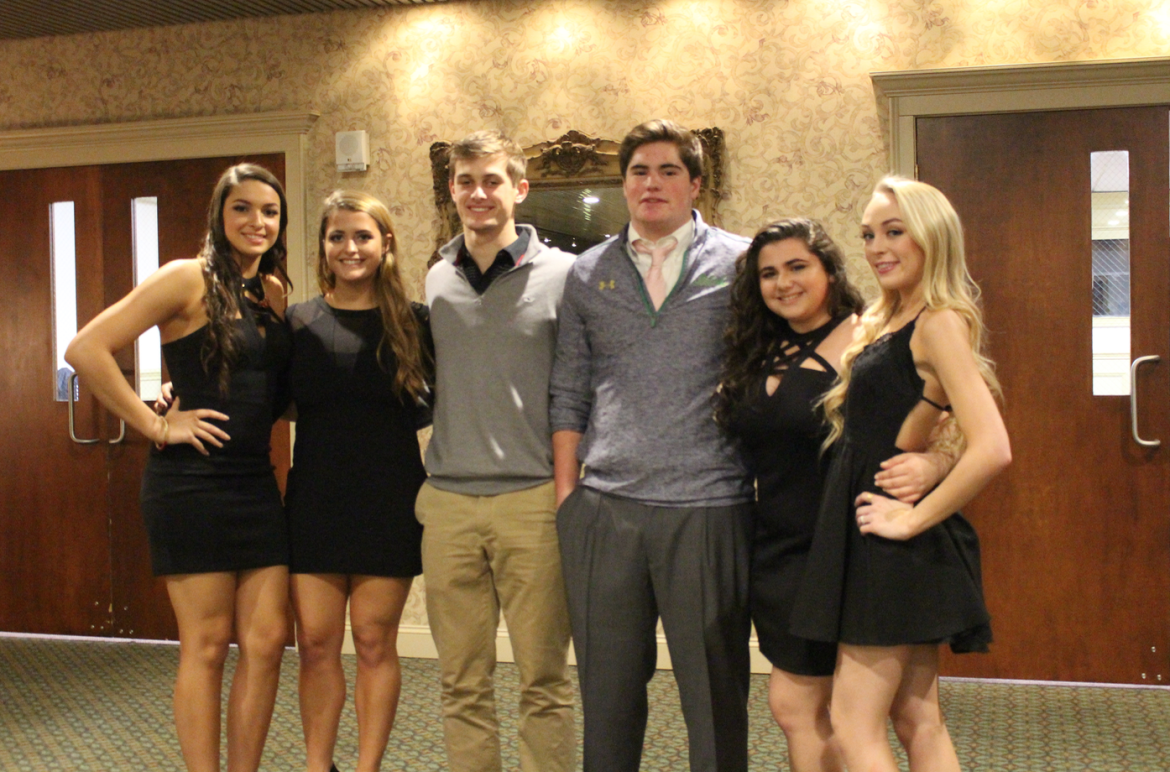 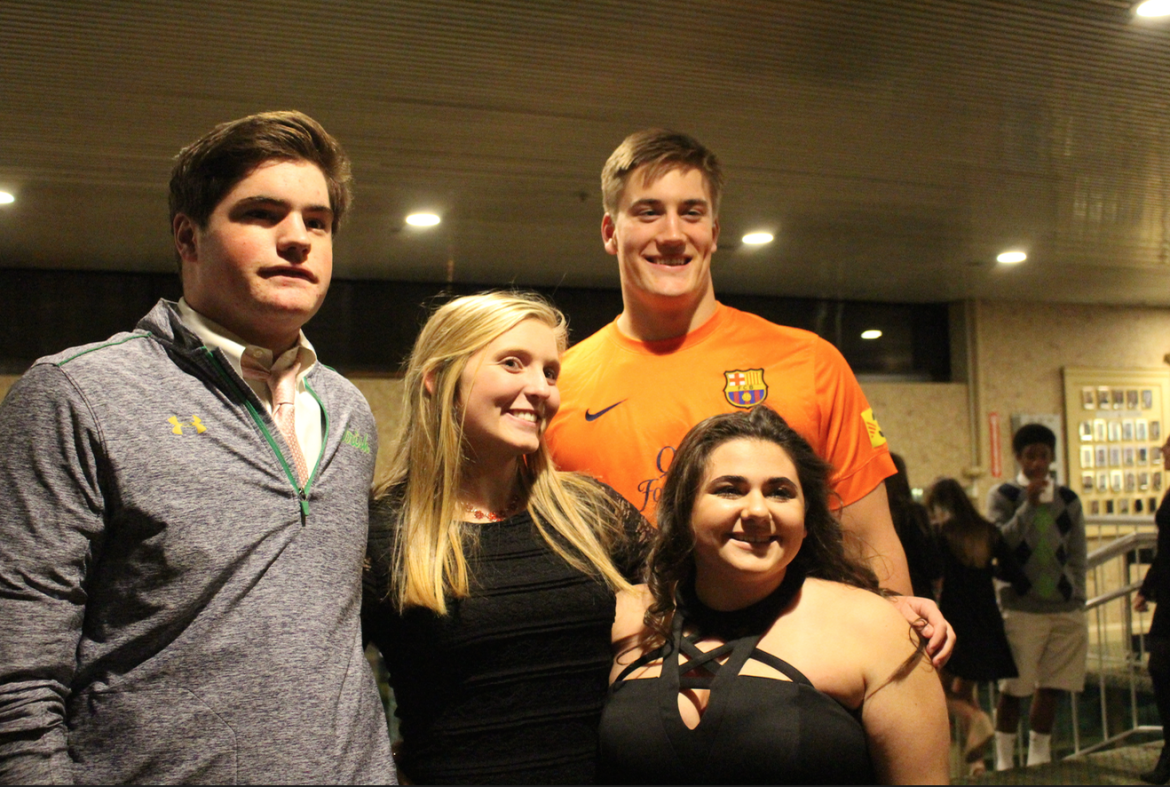 In Dallas, the girls expect to be just one of 400 teams competing, and their routine will be much higher in difficulty that what they typically perform at GHS Games.

“No one has seen the routine yet,” said Stella Perrone.

Courtney Nastahowski explained that while there still is a gymnastics team at GHS, these days cheerleading stems from gymnastics, but is much more fun because it includes the element of group dance and music. “Cheerleading isn’t where gymnastics has gone. It’s more like a branch off gymnastics.”

A highlight of the event was when the cheerleaders danced along the runway to Rockin Robbin, something of a tradition. 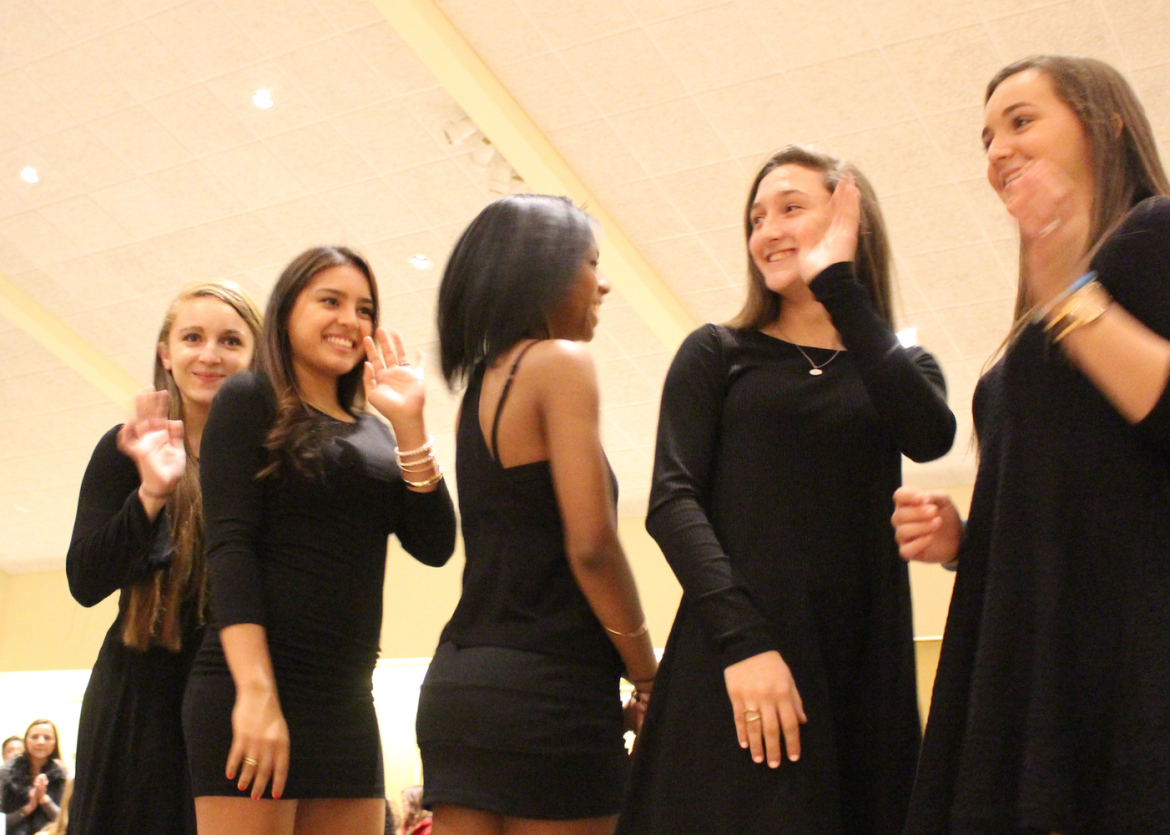 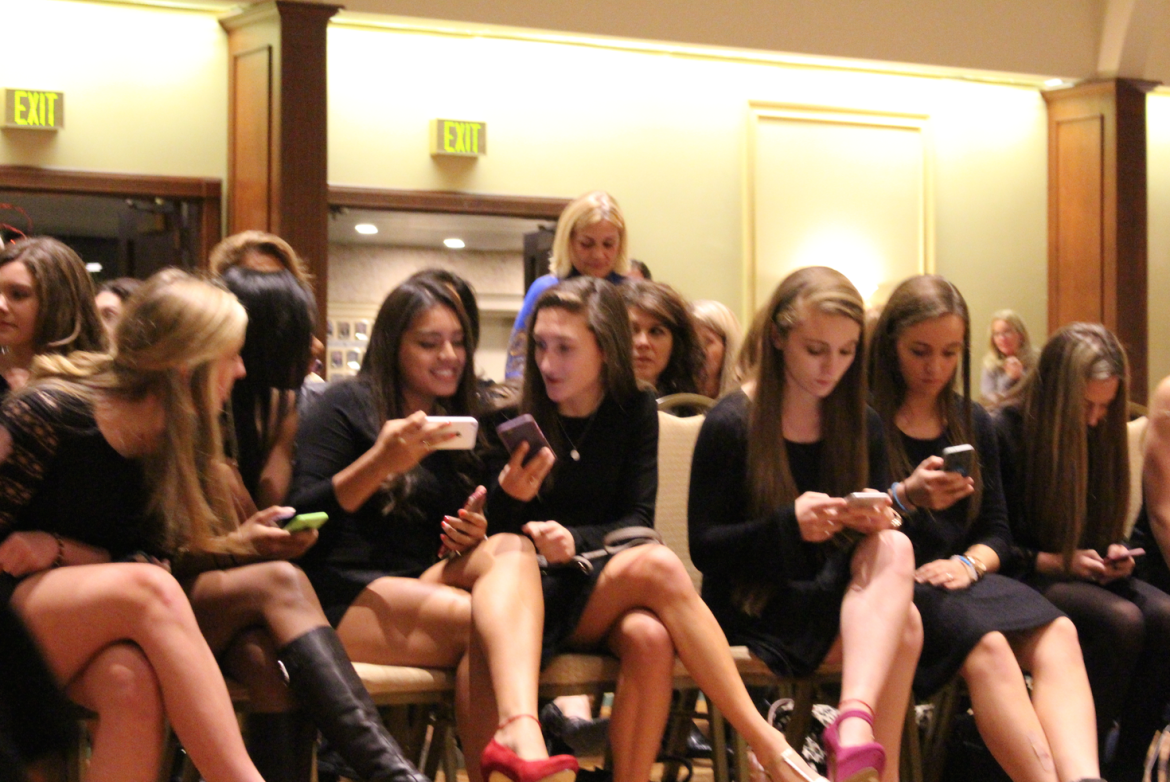 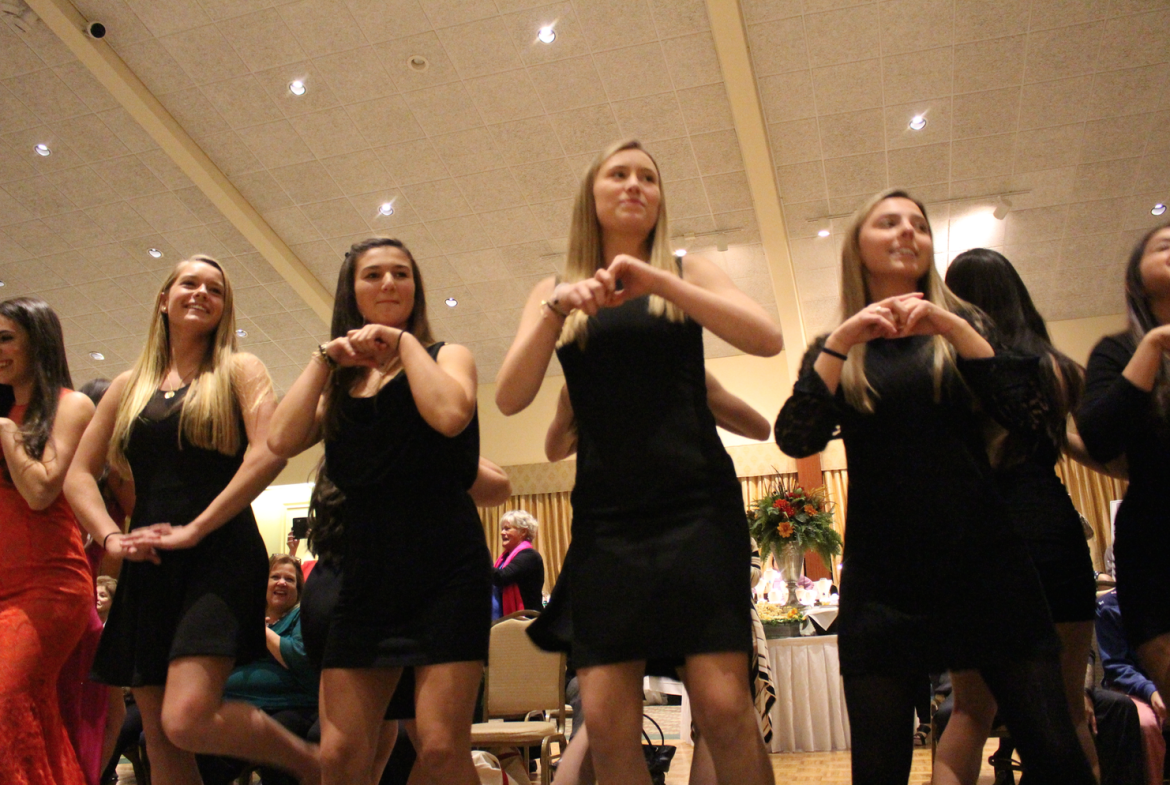 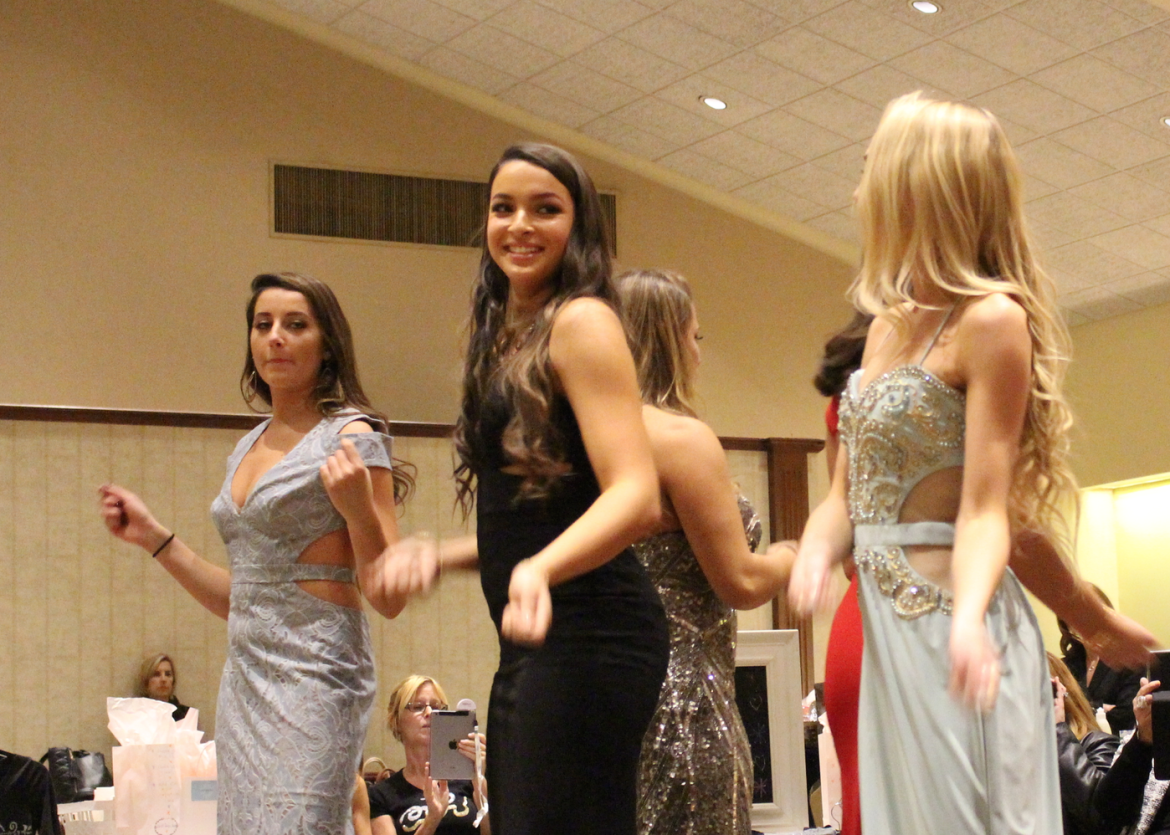 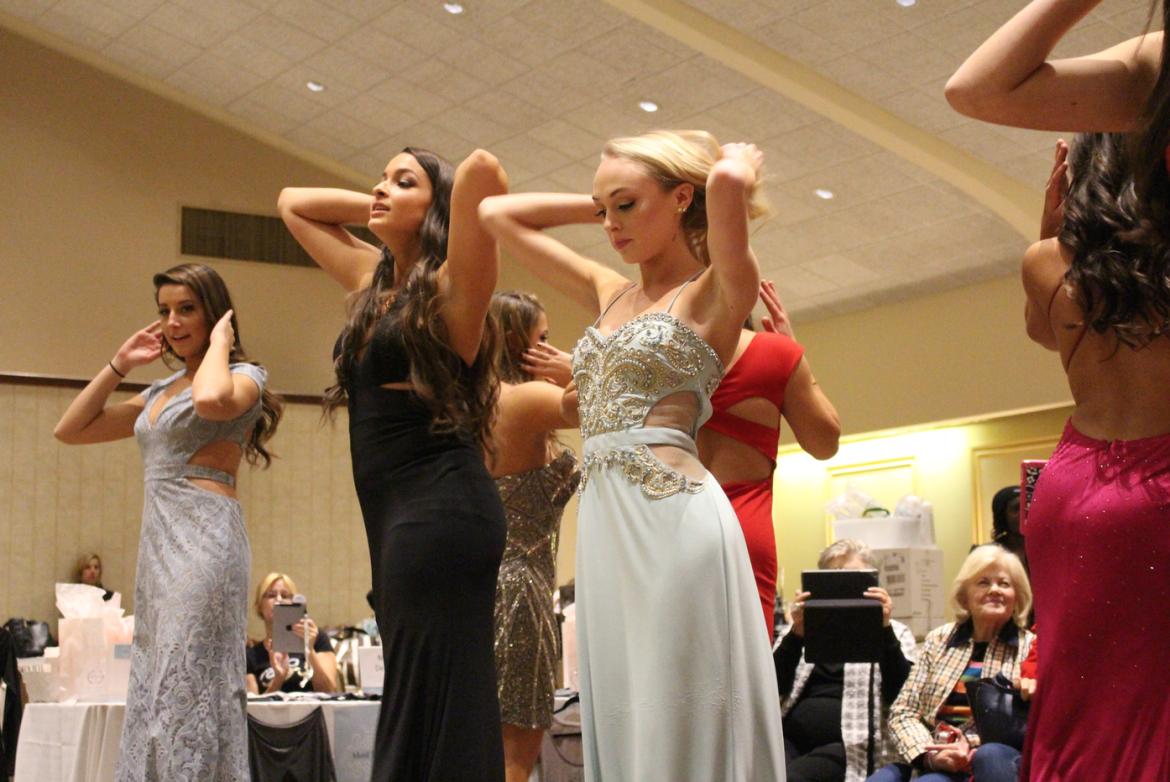 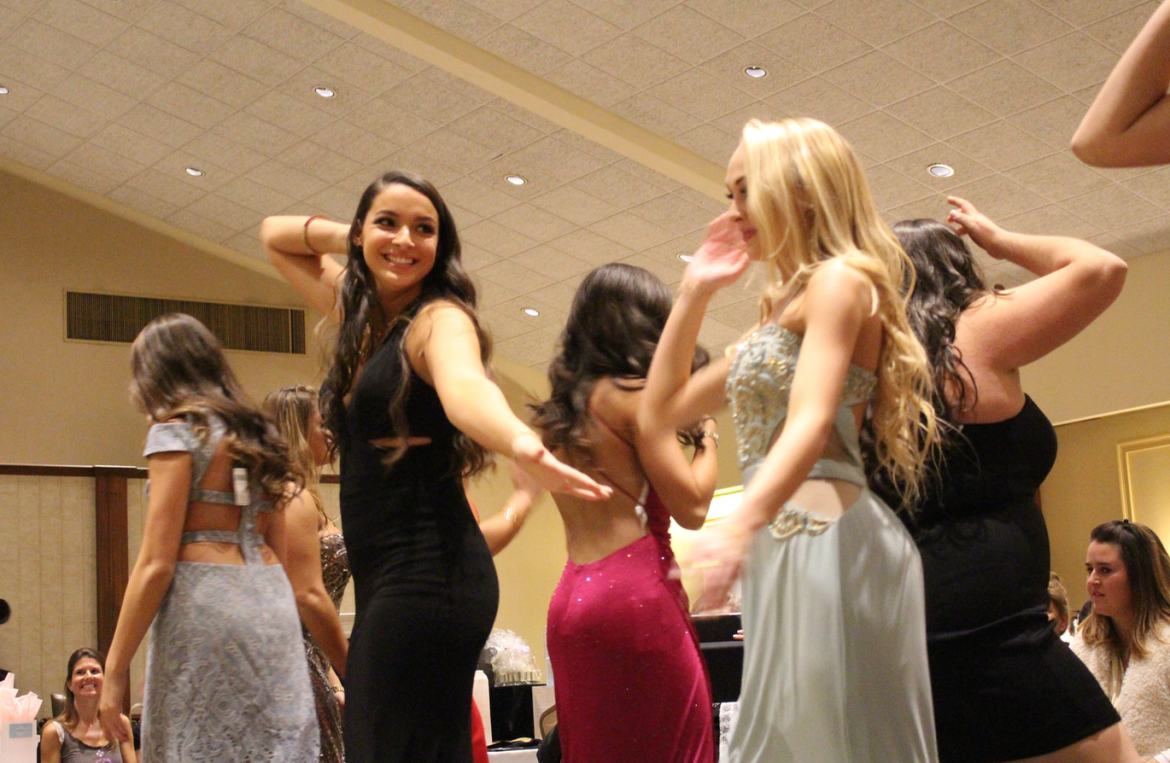 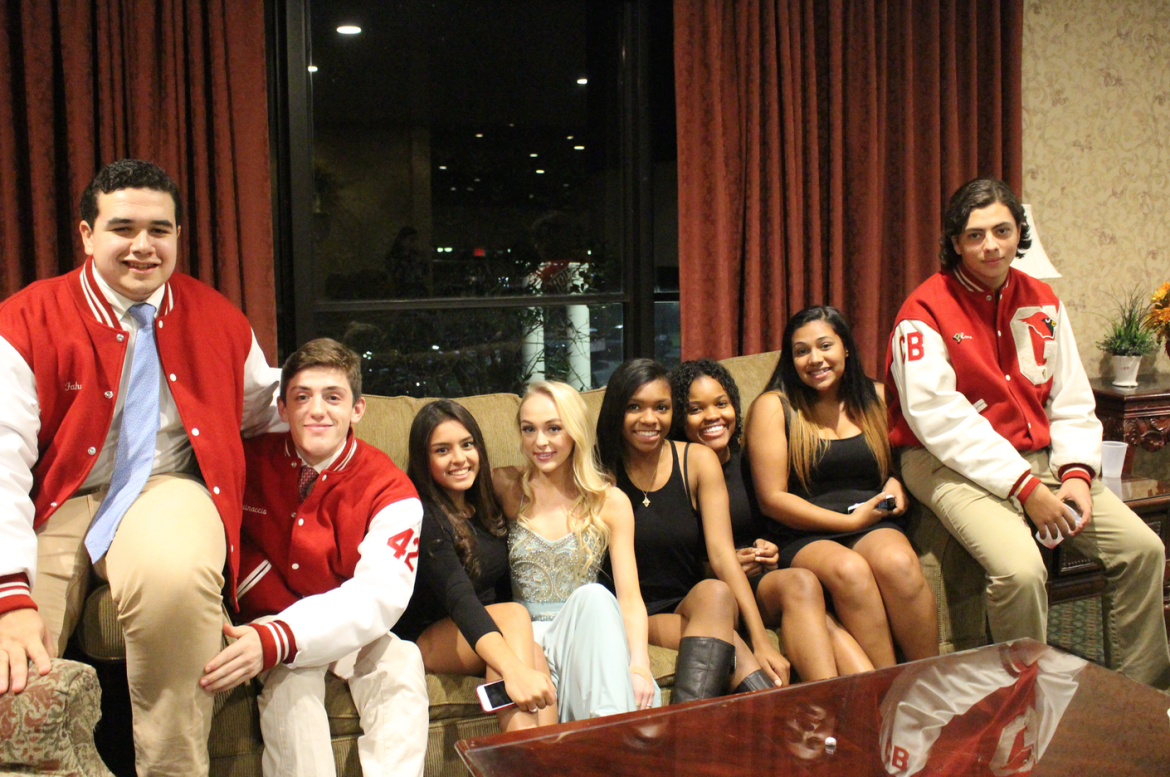 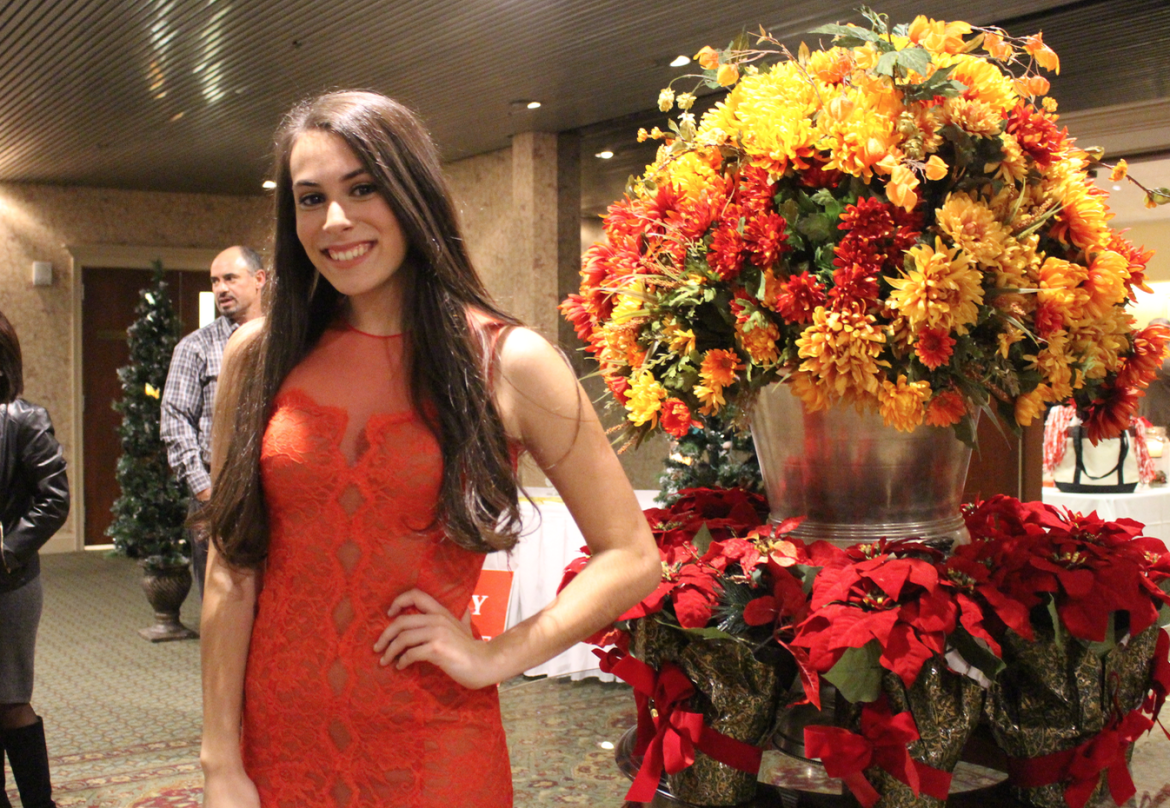 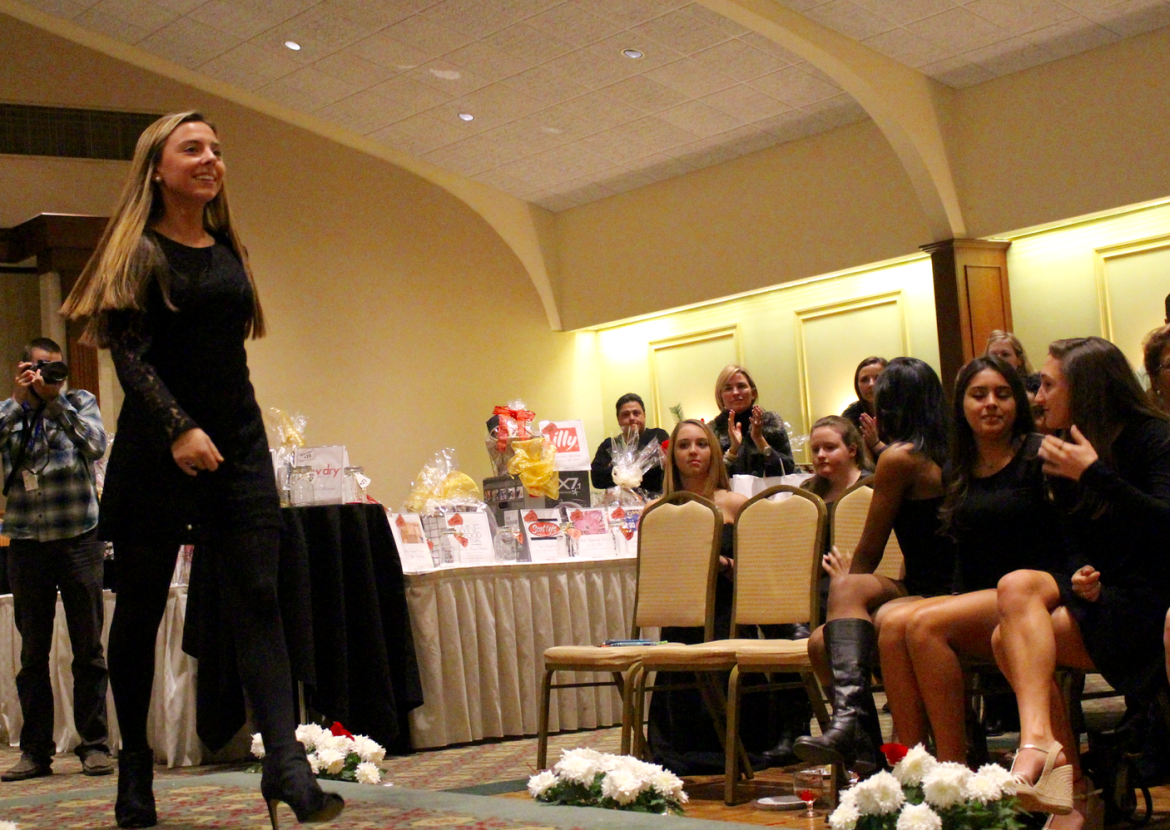 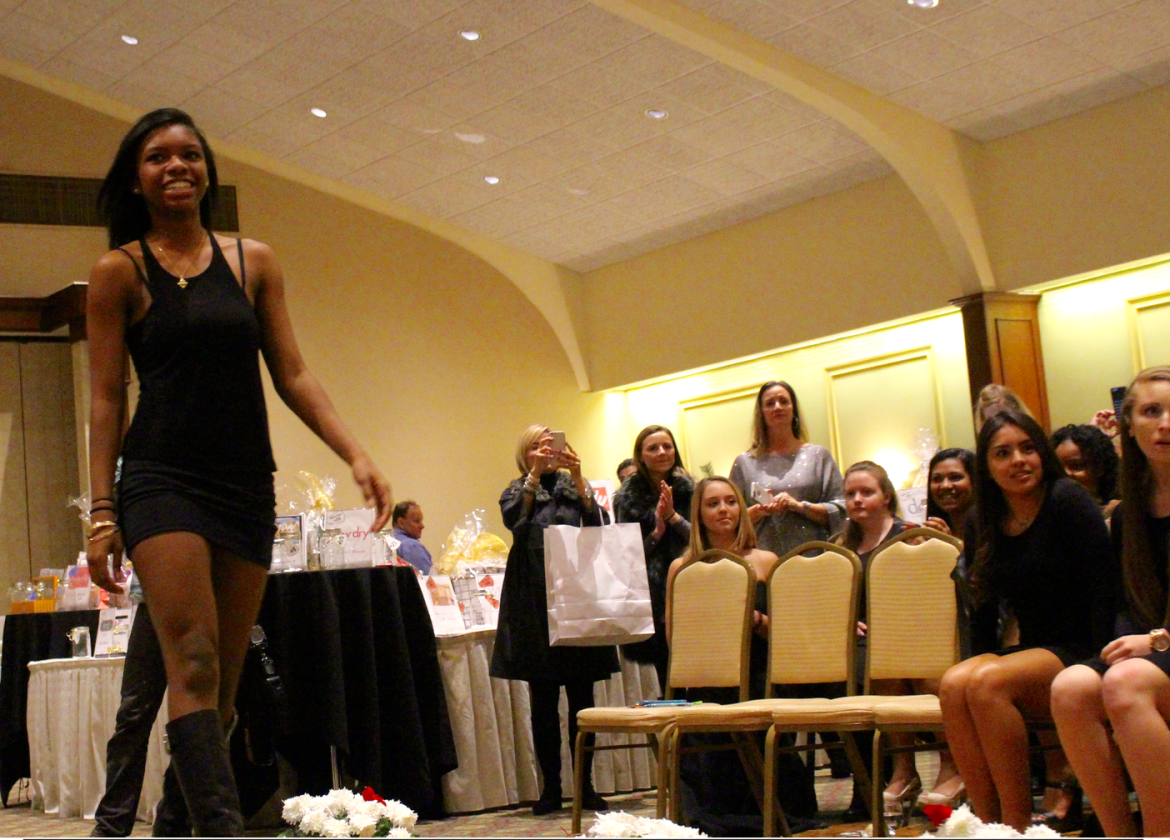 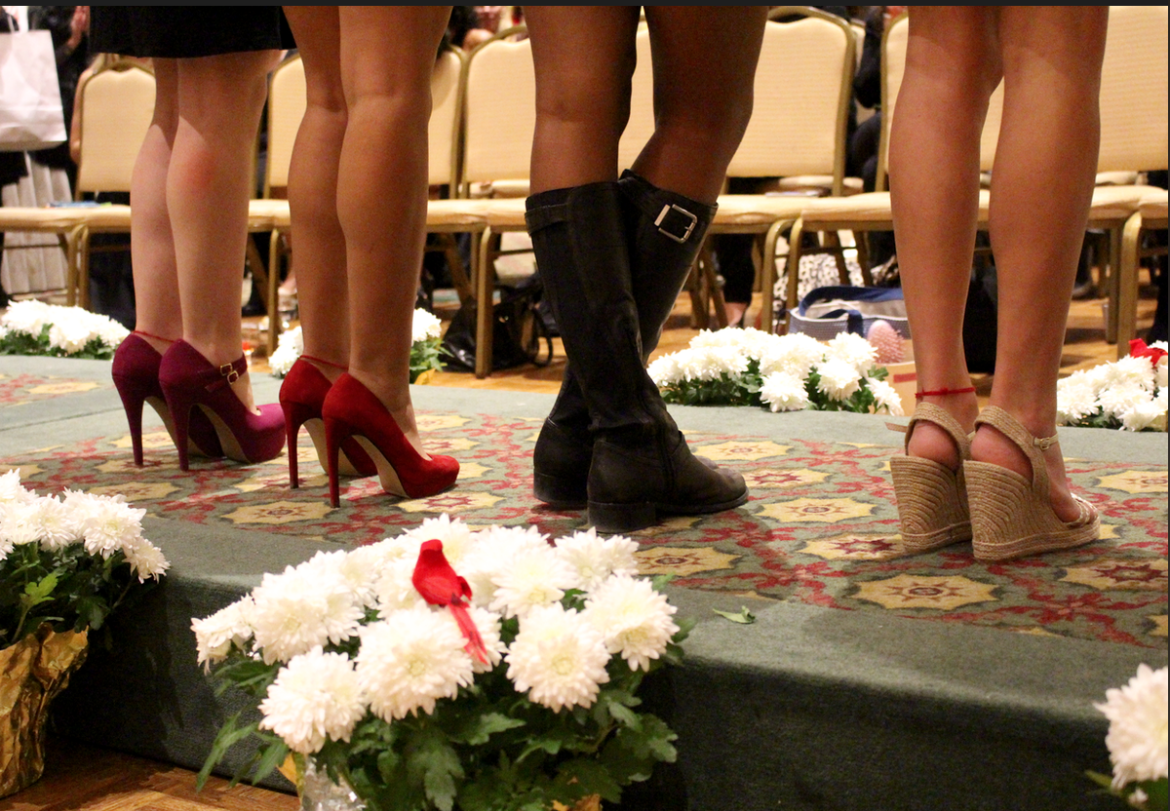