On Monday night at the Arch Street Teen Center, Zeke Thomas was the keynote speaker in a forum billed as Stress, Success and Teenage Setbacks: How to Cope.

A survivor of sexual assault, Mr. Thomas, 28, shared his story with candor, including the traumatic incidents that took a toll, and low points during which he kept his feelings secret.

“I didn’t want to be labeled a victim­­,” Thomas said, describing his motivation for finally sharing his story on Good Morning America. The segment, which went viral, resulted in Thomas realizing he could give a voice to the voiceless.

“It was hard for me to accept they wouldn’t find my rapist, so I decided to scream it out to anyone who would hear it,” he recalled. “I didn’t go on to GMA to change things. I went on selfishly to scream it out as loudly as possible. Only days, weeks later, I realized I was changing things just by talking about it.”

Thomas, whose father is NBA Hall of Fame member Isiah Thomas, said he was first assaulted at the age of 13, and dealt with that trauma through years of denial.

Keeping his secrets inside and masking them with denial, Thomas said once he started telling the truth, there was no turning back.

“Lies are like leaves, the secrets just start falling off,” he said.

At 27, when it happened again, he said he ultimately shared his secret by shouting it in the back of a taxi cab with his parents. “Not at them,” he said.

“I was assaulted again at 27, which triggered memories at 13 I hadn’t processed.” Thomas said that in the years that spanned the first and second incident, there was drug and alcohol abuse, but that he finally did begin to cope when he told his parents what had happened.

As for the viral GMA interview and subsequent notoriety, he said, “I didn’t sign up to be an activist, or to talk about my pain all the time. Some days I don’t want to get up out of bed.” Still, he said, he has gotten help and absorbed the power of love. 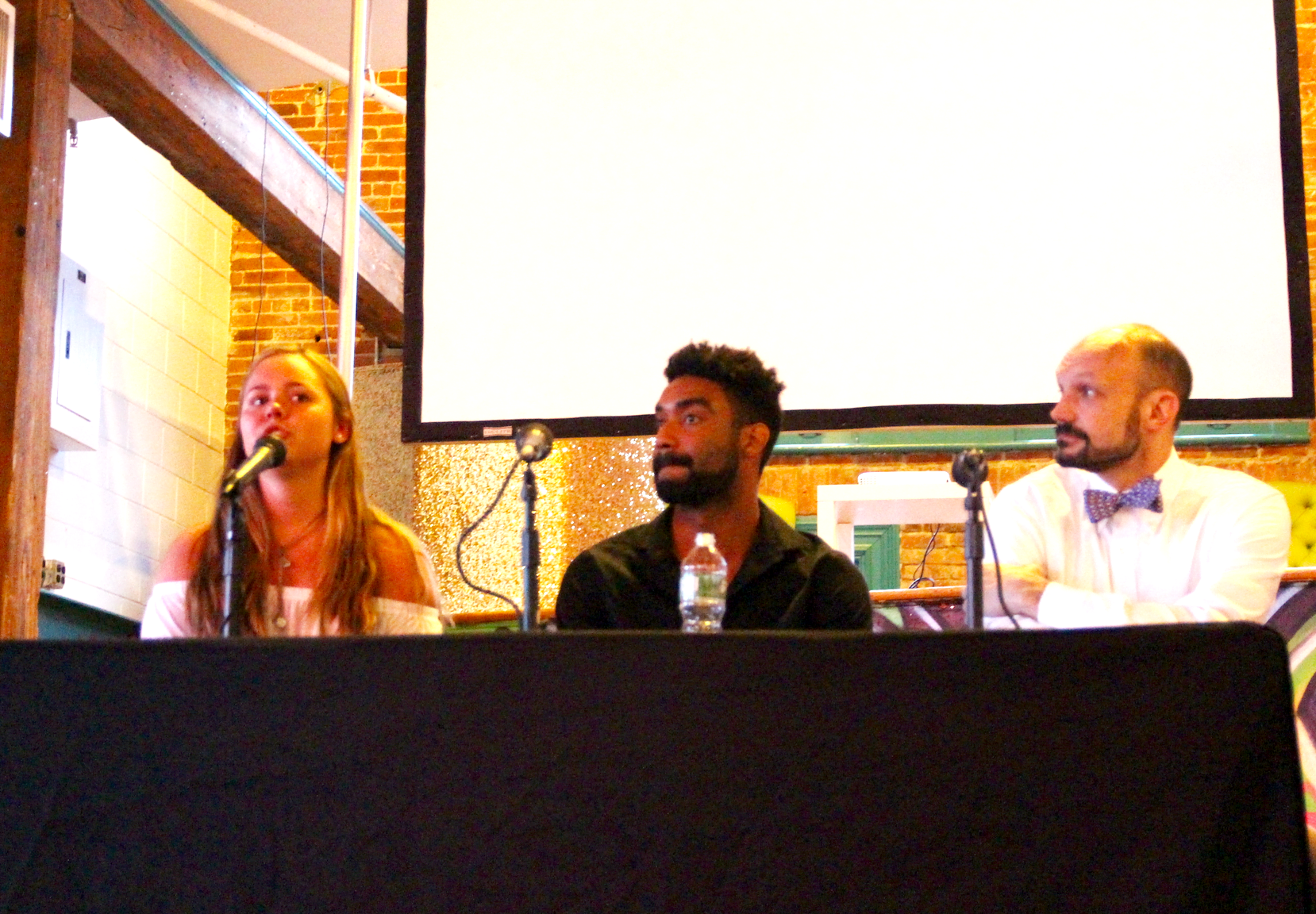 “Mental health, going to therapy, talking about it, changing my lifestyle, changing my diet, changing my exercise… these things are simple, but you have to do them to beat stress and trauma,” Thomas said. “If you’re not ready to do the work, you’re going to get swallowed alive by the pain.”

Thomas said when he finally shared what happened with his parents, it was hard for them to hear and even harder to learn that it had happened twice. Still, he said, they were eager to help.

Thomas said that through therapy, love of his family, and his passion for music, which he said is therapeutic in itself, he has learned to cope. He added that having a safe space to retreat to is valuable too.

“I don’t just let anybody in my home,” he said. “It’s small. It’s an apartment. But my safe space is actually a steam room. It’s where I’m able to be with my thoughts and breathe and meditate.”

Thomas said changing his diet and working out three times a week have also been beneficial in his journey. “I drink nasty green juice,” he joked. “And I try and call my grandmother. Just that simple call to say, ‘How are you doing?’ will change your day as well as theirs.”

Sharing some practical advice on being a good person and showing love, Thomas suggested asking a person, “How are you?” and really listen. “Give them a chance to answer.”

Jeff DeTeso, PhD, a Certified School Psychologist at Greenwich High School who also works in private practice at the Waverly Group, said that for teens the number one source of stress is school, followed by parents and family, friends and relationships and finances.

“I never leave my office,” DeTeso said. “Kids come in, one after the next, after the next, because we have more kids believing in talking about stress. When I was growing up you couldn’t have dragged me into see a therapist. …There is less of a stigma, but we’re still not doing it enough.” 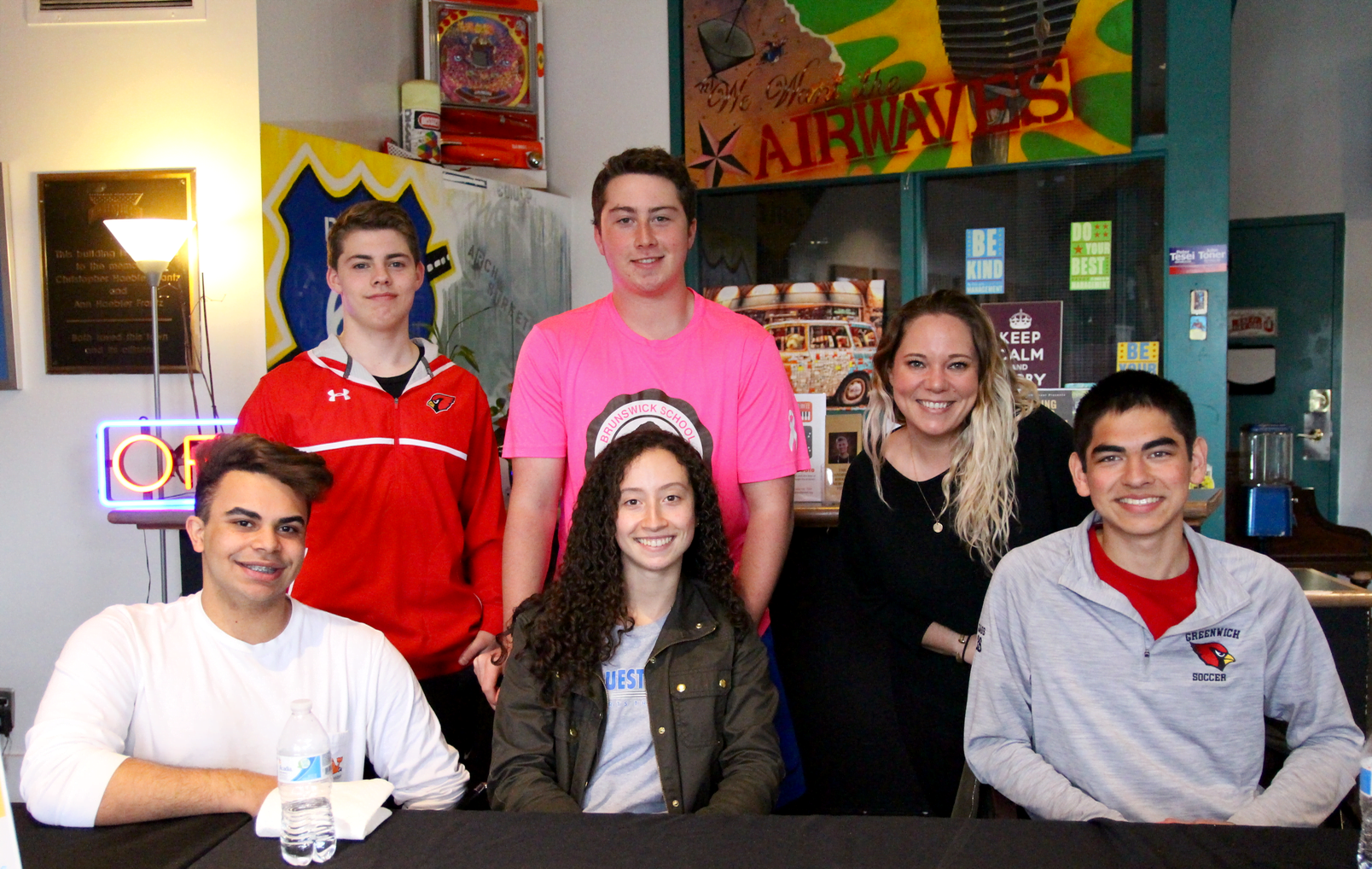 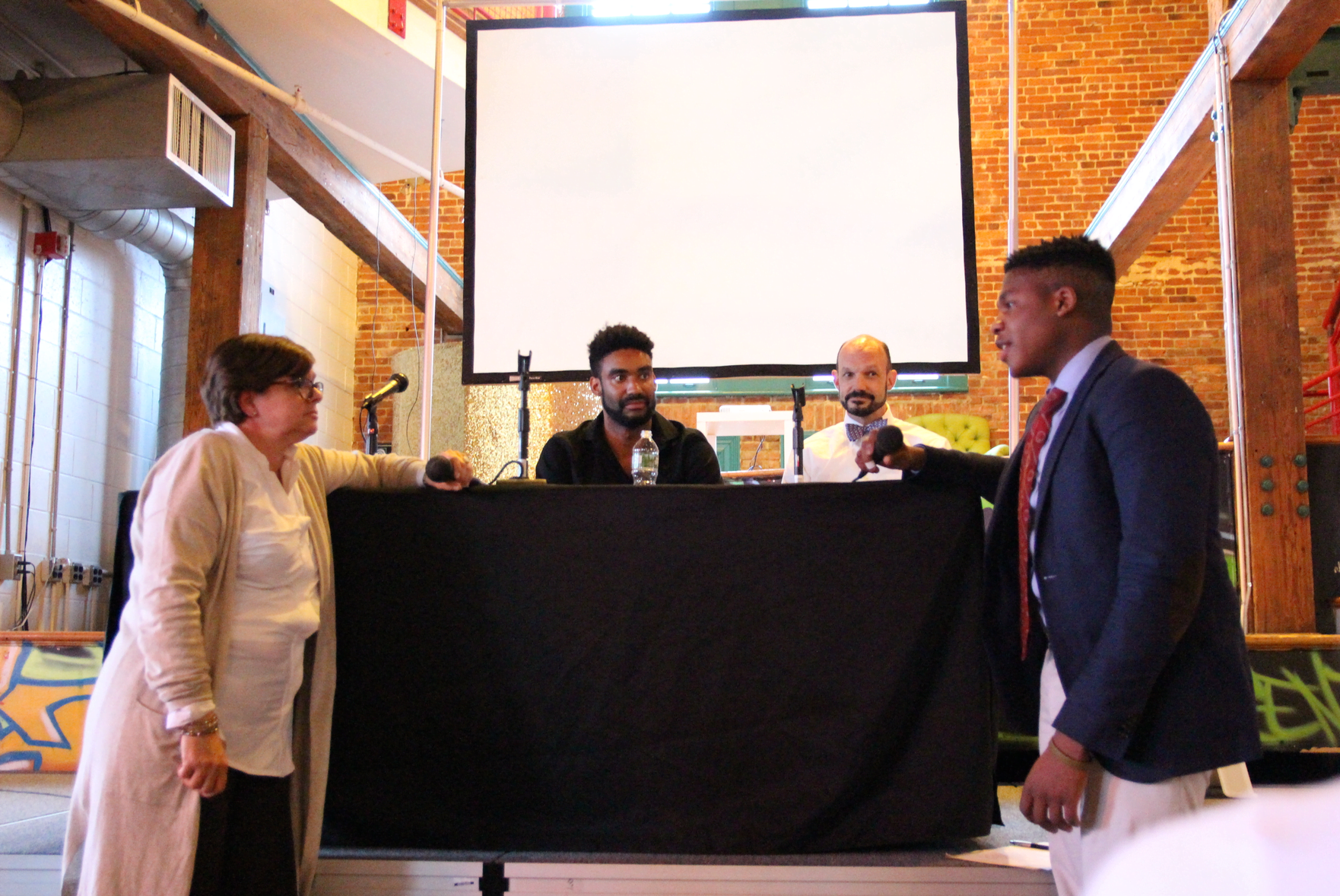 DeTeso said there are usually signs that someone is in need of help, including withdrawal, isolation, irritability, lack of sleep, not eating, overeating, sleeping too much, alcohol and substance abuse, anger, staying on the computer forever, anxiety, slipping grades, changes in friendships, or changes in attire.

Tracey Masella of Silver Hill Hospital for Mental Health and Addiction, who also has a private practice and a podcast called Conversations on Mental Health Issues, did a role playing exercise with Daniel Osemobor from Brunswick School, modeling both a helpful and an unhelpful way for a parent to diffuse their child’s stress.

“We have an anxiety crisis in our country,” Masella said. “More and more teens are seeking help. College campuses can’t keep up with the number of kids seeking treatment.”

Masella pointed out that there is a focus of attention on getting kids into college. “But when they get to college they can’t cope and they break down and there’s not enough of a support system.” 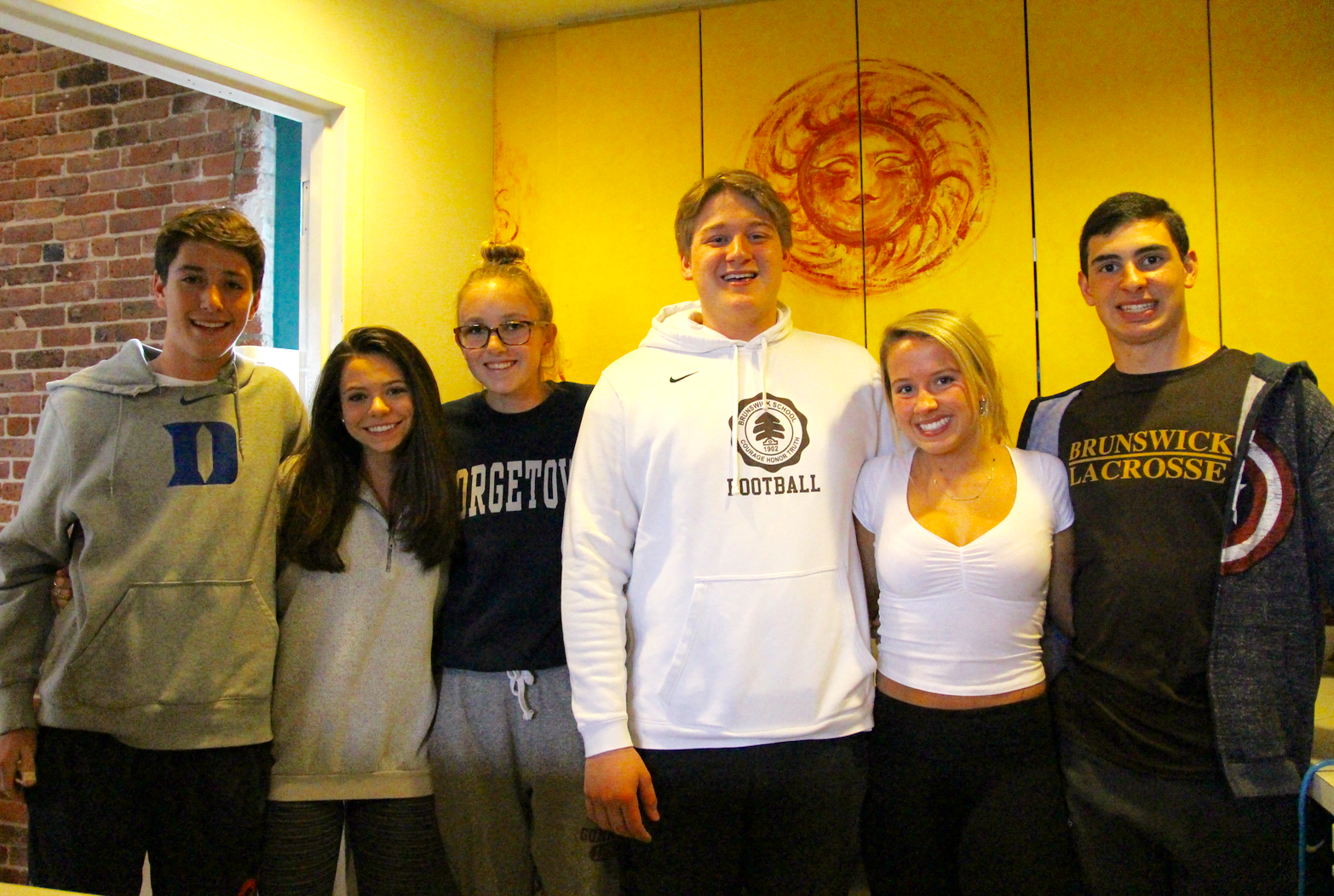 Popular GHS YouTube vlogger Lucy Massam shared her story of coping with anxiety and getting help.

“I used to compare myself to other people,” she recalled, adding that expectations during the college process can be a great source of anxiety. “My dad said it’s not where you go, but what you do when you get there.”

Lucy said it’s key to realize everyone has their own potential and individuality. “You’ll get an education wherever you go. Stop comparing yourself to other people.”

Like Zeke Thomas, Lucy said it’s important to love yourself. “In therapy I learned practices for self love. It’s a practice. You have to practice daily and it becomes routine,” she said. “Two years ago I hated myself. Going to therapy and learning those practices, and changing the media I was consuming made a difference.”

Thomas agreed with Lucy’s point about what media is consumed.

“The toughest thing we have at home is the square thing in your pocket,” he said. “We are receiving six billion negative messages a day. Our brains are officially over-stimulated. Unplug from that for two minutes, I bet that will change your life.”