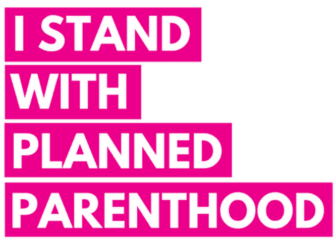 At the all-girls Sacred Heart Greenwich, a Catholic School on King Street, a student was told to remove a sticker that states “I stand With Planned Parenthood” from her laptop, or else.

Planned Parenthood offers a range of health services for women and men, and a sliding scale to accommodate those without means to pay for services. They also provide abortions. The school which recently held a pro life assembly, had a swift response to the sticker.

Kate Murray, a resident of Wilton, was told by head of School Pam Hayes that if she didn’t remove the sticker she couldn’t return to school next year.

When word of Kate Murray’s potential expulsion spread, reaction on the internet was swift.

On Twitter, Planned Parenthood of Southern New England which serves Connecticut and Rhode Island tweeted its support for Kate Murray.

We stand with Kate Murray and all young women who are using their voices, stepping into their power, and standing up for what they believe in. Together, we will build a future where all women can fully pursue their dreams, wherever they may lead. https://t.co/6902mUx2xU

Look no further than the Sacred Heart Greenwich Facebook page for the outcry, starting with a comment from Caroline Amen, who claimed that stickers and hats had been present and approved on campus during the last election.

“Students wearing MAGA hats was never discouraged apparently. It clearly seems that certain sides cannot be displayed while others are more than accepted,” she wrote.

In a Feb 7 email to the Sacred Heart community, Head of School Pam Juan Hayes, class of ‘1964, wrote, “…we discourage the display of stickers, posters, buttons or banners supporting or opposing political candidates, positions or organizations on clothing, computers, lockers or anywhere else on our campus.”

On Thursday she wrote a second email, saying, “Open dialogue is alive and well on our campus and that’s why we discourage the displays of slogans and bumper stickers, which in an educational environment can have the unintended consequence of stifling open debate.”

Hayes said there are better forums for dialogue than a sticker. “For example, in junior year, all students take a theology course in ethics and morality,” she said. “In the class, students choose from the topics of abortion, euthanasia and the death penalty and then choose a side to debate their view.”

Meanwhile a petition on ipetitions.com titled “I stand with Kate Murray” and a goal of 1,000 signatures, had 1,922 signatures Friday morning, as well as hundreds of comments, mostly from alumnae from around the world.

Many comments agreed with Caroline Amen that the school had not been consistent in the enforcing rules on displaying support or opposition to political candidates.

One commenter said, “It seems to be a hideous contradiction that the school would expel someone for a small sticker and yet tolerate people coming to school wearing Let’s Make America Great again buttons and t-shirts. To be clear, I am ok with both, as everyone has the right to express their point of view.”

“Publius” from Dallas said, Pamela Hayes, the administration and the Board of Trustees of Sacred Heart Greenwich have historically engaged in repressing student opinions and beliefs that defy their preferred politics, while enabling students who agree with their views to freely grandstand and flaunt “Make America Great Again” hats.

In hundreds of comments, people condemned the school’s move as a violation of free speech, while others vowed not to donate to the school.

A commenter from Canada wrote, “Whether you believe what she believes is not the issue. To allow her a voice, isn’t this the meaning of Tolerance?”

One 91st Street alumna who signed the petition said the school was hypocritical to have invited Lady Gaga, an alumna of the school, to film a Thanksgiving special on school property, adding that that was difficult to reconcile with a threat of expulsion over the Planned Parenthood sticker.

CSH alumna Tailor Dortona from Washington wrote, “The CSH administration is riding a fine line and banning books isn’t far behind. …as Hellen Keller famously stated, ‘a community that excludes even one of its members is no community at all.'”

Lucy Alderson-Smith wrote that during her time at Sacred Heart she had grappled with the annual “Pro-Life” Chapel, which she said infringed on her “personal space with God to impose a political message that was in alignment with the school’s values.”

Wendy Hill of Dobbs Ferry wrote, “Let’s call out the elephant which is an older teacher who is too conservative and has antiquated views. Time’s up!”

“Sacred Heart, you confuse me.  In my four years, I witnessed many pro-life stickers and pro life t-shirts. No one batted an eyelash. Obama 2012 stickers adorn laptops.  No one cares.  Apple stickers appear on computers.  No requests for removal. Kate places a Planned Parenthood sticker on a laptop and she is being told she will be expelled if she doesn’t remove it.

...If a male teacher finds this laptop sticker distracting, then he must find enough self control to ignore it, just as I ignored the many pro-life stickers and shirts that were worn around school throughout my four years at Sacred Heart.” – Caroline Burch, Rome, Italy

Out of about 400 comments, we found two in defense of the administration’s decision.  A Sacred Heart aluma from Bedford said, “There are strict guidelines at Sacred Heart and if you do not agree with, or wish to abide by them, just DON’T ATTEND!! There are plenty of other schools in this area where you can freely tattoo ‘Planned Parenthood’ on your forehead if you wish and not be questioned for it.”

Another commenter, “anonymous from Wayne” wrote, “Everybody knows abortion is wrong and although many still believe planned parenthood doesn’t specialize in abortion the reality is it does, planned parenthood which is being supported here helps fund people to kill their babies and strip the lives from innocent human beings.”

Brenda Daly from Hastings on Hudson was able to reconcile her opposition to abortion with her support for Murray.

“Stickers and pictures of Ronald Reagan, Trump and JFK hanging next to every Pope since 1960 are approved by Sacred Heart staff. JFK, a gorgeous hypocrite and womanizer! But expressions of a woman’s right to birth control (forget abortion!) is forbidden!?!” she wrote. “…Neither Planned Parenthood nor anyone I know, woman or man, promotes abortion. Catholics like myself value freedom of speech and women’s rights to their own bodies and learning how to prevent a pregnancy, whether married in the Catholic Church, or not.”

Murray has removed the sticker from her laptop, but not decided whether to stay at Sacred Heart.