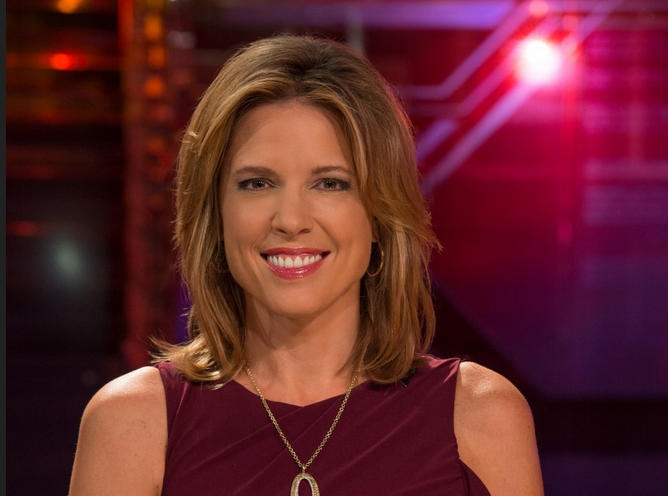 The GHS class of 2016 announced on Monday that Hannah Storm will be the commencement speaker at graduation on June 21.

“The class of 2016 is thrilled to have Ms. Hannah Storm as our graduation keynote speaker,” said GHS Senior Class President Joe Peters, going on to describe Storm as having had “a pioneering role as a woman in sports journalism.”

GHS Senior Class Vice President Kate DeWinter added, “Hannah Storm is a very influential woman in the sports broadcast world, so we are honored to have her as our graduation speaker.”

“We are very excited to have Ms. Storm as our speaker,” said Dr. Winters, GHS Headmaster. “Being someone who is known and respected by our students made her an optimal choice.”

“High school graduation is such an important moment for graduates and their families,” said Hannah Storm, host of ESPN SportsCenter, Face to Face with Hannah Storm. “I am very honored to be a part of this special day in the Greenwich High School community.”

Greenwich High School (GHS) Graduation will be held on Tuesday, June 21, 2016 at 6:30pm* at the high school’s Cardinal Stadium.

*In case of inclement weather, the commencement ceremonies will be held indoors in the GHS Student Center in two groups – students with last names beginning with A-K will begin at 4:00 p.m., and students with last names beginning with L-Z will begin at 7:15 p.m. While seating for the outdoor ceremony is unlimited and on a first come, first serve basis, each family will receive three tickets for use in case there is an indoor ceremony.

Hannah Storm, ESPN’s SportsCenter host, is an award-winning producer, director, trailblazing journalist and author; a pioneer in the field of broadcasting for women, Storm founded Brainstormin’ Productions and The Hannah Storm Foundation in 2008.

Storm hosts the 10:00-11:00am ET hour of SportsCenter, Face to Face with Hannah Storm. During the NFL season, she hosts the Sunday morning SportsCenter, leading into SundayNFL Countdown. In

addition, Storm has co-hosted many of the network’s marquee events including: Wimbledon, the U.S. Open, the NBA Finals, the New York Marathon, Veteran’s Day, the ESPY Awards, the Super Bowl, the NCAA College Football Playoff National Championship and the Rose Parade on ABC.

Storm is also host and executive producer of ESPN’s primetime interview series, Face to Face with Hannah Storm, where she sits down with various newsmakers in sports. The Face to Face brand has since been extended to a weekly series during the NFL season. To date Storm has profiled top newsmakers in the sports world from the NBA, NFL, NASCAR, MLB, college football and many other sports. In 2012 Storm co-anchored daredevil Nik Wallenda’s unprecedented live Niagara Falls tightrope walk for ABC News. She has also served as a correspondent for ABC’s 20/20, where she collaborated on stories with Shark Tank stars Robert Herjavec and Kevin O’Leary.

At NBC Sports, in addition to hosting four Olympics and the “NBA on NBC,” Storm became the first woman in American television history to solo host a broadcast network’s sports series when she hosted NBC’s Major League Baseball coverage, including three World Series.

Taking a break from sports broadcasting, Storm spent five years (2002-2007) at CBS News as host of “The Early Show,” covering numerous major news events ranging from the 2004 Presidential election to the Iraqi War and Hurricane Katrina. While at CBS News, Storm also hosted shows for the award-winning CBS newsmagazine, “48 Hours” and served as co-host for the network’s coverage of the Thanksgiving Day Parade.

Following a passion to direct and produce films, in 2008 Storm created Brainstormin’ Productions. She has produced, executive produced and directed several projects for ESPN and espnW including: Unmatched, for ESPN’s Peabody Award-winning “30 for 30” film series; Shaq & Dale, for the SEC Network/ESPN/ABC; Love & Payne, the inaugural espnW “Nine for IX” series short film; Swoopes, for ESPN’s award-winning “Nine for IX” series; and Moving the Goal, for espnW’s “HERoics” series, part of the 2011 FIFA Women’s World Cup coverage. Storm has also produced branded content for ESPN, espnW, and ESPN.com including: Journeys & Victories (Proctor and Gamble); Beyond Reason (Oakley); Stories of Will (Under Armour); The Drive series (Ford); and The Journey series (Speedstick).

In addition to the Gracie Awards® Storm received for her work through Brainstormin’ Productions, she has been the recipient of two others: 2005 – Outstanding Anchor, News for her work on CBS News; and 2000 – Pioneering work as a female in the world of sports broadcasting for her work on NBC Sports.

Born with a port wine stain underneath her left eye, Storm has become an advocate for children and parents of children suffering from debilitating and disfiguring vascular birthmarks.

In 2008 she founded the Hannah Storm Foundation to raise awareness, fund treatment and provide educational information for vascular malformations. To date, children from the United States, China, the Republic of Georgia and Slovenia have received surgery funding through her foundation.

Storm has penned two books: “Notre Dame Inspirations,” and “Go Girl!: Raising Healthy, Confident and Successful Daughters through Sports.” For her work as an author, Literacy Advance of Houston honored her as a Champion of Literacy. She has also contributed to a variety of other books and written extensively for several magazines, including Cosmopolitan, Nick Jr., Family Circle, Child and Notre Dame Magazine.

Storm is a graduate of the University of Notre Dame and the mother of three daughters with her husband, Dan Hicks of NBC Sports.