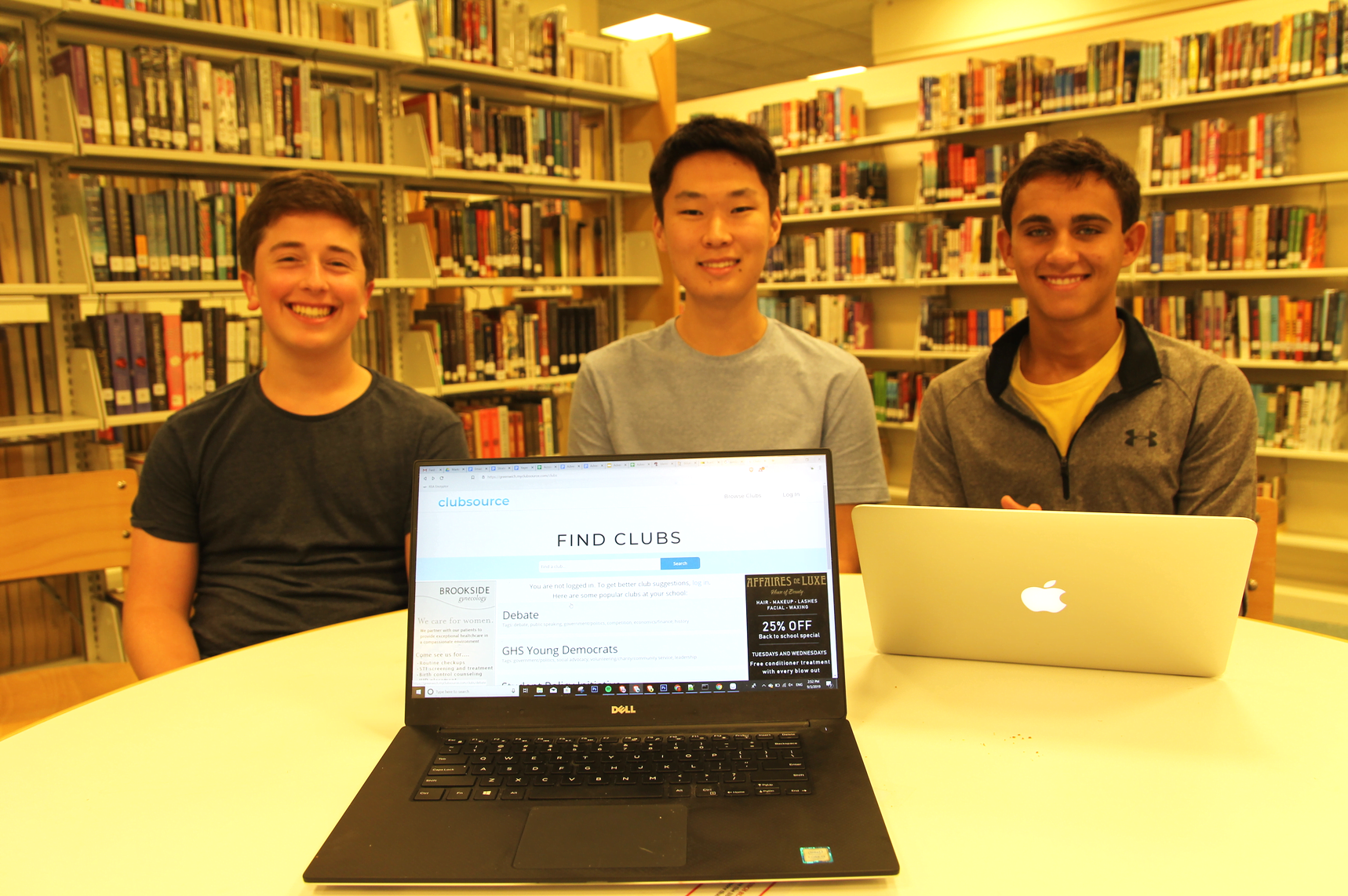 Greenwich High School seniors are happy this week. They returned to school, some even having won the lottery for first semester parking passes, and learned they would be excused from Opportunity Block at the end of the day.

Opportunity Block, a half hour at the end of the day created by shaving a few minutes off each preceding class, was conceived by former Greenwich Schools superintendent Dr. Jill Gildea. After the change in school start times pushed the day forward an hour, it was a solution to athletes getting stuck in traffic en route to away games, which meant missing academic instruction, quizzes and tests.

Implemented last year, students who didn’t have a pass to go to a club or meet with a teacher were stuck in what amounted to a mandatory, often unproductive study hall during Opportunity Block from 2:45 to 3:15pm.

This Tuesday at 2:45pm, GHS headmaster Ralph Mayo came over the PA system to announce, “All seniors may leave their last period class at this time. Other students should remain in their classes unless they have an email from a teacher saying they can be excused.”

“Seniors being able to leave is great,” said Toby Hirsch. “It’s good they’re letting kids apply to leave for internships or other obligations like jobs.” 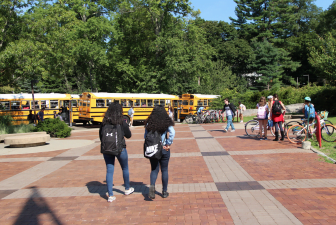 At 3:15 dismissal at GHS was less chaotic because seniors are excused from Opportunity Block at 2:45pm. Sept 3, 2019 Photo: Leslie Yager

Indeed, Greenwich Schools superintendent Dr. Toni Jones explained on WGCH 1490 radio Tuesday morning that now seniors can opt out of Opportunity Block and have had ‘freedom with responsibility.’

“They are preparing for a college ready, work ready environment, and they should have some flexibility,” she said during her Focus On Education interview with Tony Savino.  “And our younger students – as long as their parents give them that permission – can take care of siblings, do community service or athletics not associated with school, or go to work. …It’s case by case, and it’s a safety issue. We want to know where our students are.”

Dr. Jones said, for example, if a student is checked out to participate in crew, or go to a job, their parents must know they are on a list.

“There’s an app so so staff know where they are,” she said, adding that with the changes more staff are available for extra help. “That was always part of the intent as well,” she said.

Timothy and Toby, along with Lucas Gazianis, worked over the summer on a user friendly website, GreenwichClubSource, to help students to learn about the 100+ clubs at GHS. 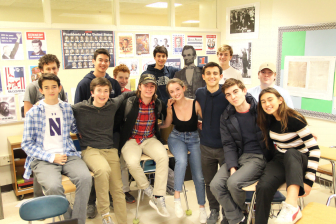 Last January Lucas and Toby, and the two dozen members of the Student Policy Initiative met during described Opportunity Block, which they described as an unproductive environment. Jan, 2019. Photo: Leslie Yager

At the ClubSource website, GHS club leaders can log in and set up profiles of their clubs.

Students can easily create ClubSource accounts and learn about the clubs before attending their first meeting.

The website has just launched, and about a dozen clubs have created profiles with photos and detailed descriptions of their clubs, including meeting schedules.

The boys expect other clubs to get on board in short order.

Timothy, Lucas and Toby are selling advertising to local businesses who want to target GHS. They have three advertisers already, and are talking to nearby eateries and tutoring services. Ad proceeds are distributed to the clubs that generate the most traffic on the ClubSource website.

“Half of the money goes to clubs based on how many views they get.  The better your page is, the more money your club is going to make,” Toby said, adding that the funds are distributed through PayPal.

Toby, who was able to do much of the coding for the website over the summer thanks to his AP computer science class and an independent study last year, said it’s easy to track visits to each club’s profile. It is also possible for club leaders to edit and update their profiles.

In the past, students had access to a Google doc that listed clubs and meeting times, but club leaders couldn’t edit their profiles. They had to give their edits to Students Activities director Karen Foster.

The boys said they walked around the annual club fair last Wednesday, an event that targets freshmen, but not all clubs were present, and not all students attended.

“All three of us have run clubs. At SPI we got approved in the middle of the year so we didn’t have the advantage of being part of the club fair. That could have helped us. ClubSource can fill those gaps,” Toby said. 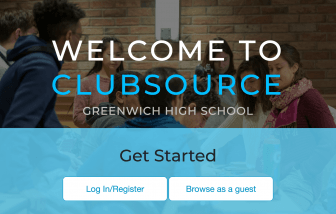 Indeed the ClubSource interface is super easy to navigate.

“It’s easy to make a page. Just log in and register as student or club leader,” Toby said as he shared the website’s intuitive design.

Students have the ability to search for clubs that might interest them.

“Students who sign up add their interests as tags, then the program will suggest clubs,” Toby explained.

“Our ultimate goal is to allow students to get a glimpse of what clubs they might enjoy before they have to commit to going to a meeting. A lot of times if you’re interested in a lot of clubs, you have to go to a meeting and many of them overlap,” Lucas said. “With a really detailed profile you can decide if it’s worth going to a meeting.”

Down the road Toby said another goal is to market MyClubSource.com to other schools.

To advertise your business on Clubsource, contact [email protected].