Recently Greenwich High School’s heart sank when news broke of yet another leak in the area of the gym and performing arts center.

The leak déja vu because it is not the first time it’s happened. 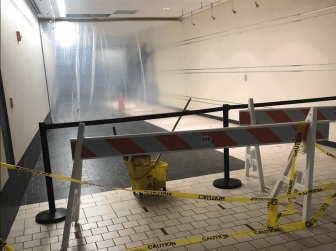 Aftermath of leak in the GHS PAC. 2018 File photo

The leak was the result of a valve that burst by the performing arts center, damaging the adjacent gymnasium floor.

As a result part of the gym floor was removed, in addition to drywall and ceiling tiles, and a cleanup is under way.

The incident impacts the school’s basketball teams because all events in Gym A and B need to be rescheduled or postponed.

The athletic director Gus Lindine has been working to find alternative locations and times for both games and practices.

On Thursday Lindine announced that the girls varsity basketball home games will take place at Brunswick School at 6:00pm. These include games on January 30, February 3 and February 6.

Beyond basketball, participants in the GHS senior variety show, SRO,  scheduled in the performing arts center on March 5 and 6 should not to be impacted.

Greenwich Schools communications director Sasha Houlihan said that water got into the PAC inner lobby but that BOE staff and contractors were able to get vacuums, water extraction equipment, fans and dehumidifiers on site in a timely fashion.

Houlihan said the district’s environmental consultant, Hygenix, has been monitoring the situation to determine moisture levels.

She said moisture levels are low.

“We continue to monitor and are hopeful that there will be limited intrusion on PAC scheduling,” Houlihan said.

While the evaluations for repairs are being finalized, students are using other space for their SRO rehearsals.

Instinct may be to place blame on the Board of Education, facilities staff, a contractor or the MISA building committee.

But is it fair to blame?

BOE Chair Peter Bernstein said in an email, “Since the incident last year, the Greenwich Public Schools administration has been working on a plan to replace any additional valves and the Board had already voted in December to request funds for replacement as part of the 2020-2021 budget.”

Houlihan confirmed the operating budget for 2020-21 proposed to the BET includes $250,000 for replacement of flexible connectors at the GHS PAC.

Bernstein added, “Given this recent issue we are exploring a go forward plan with the BET so that we can remove them on an expedited basis while the town and insurance carrier continue to look at the root cause.”

The Greenwich Athletic Foundation issued a statement this week saying they were “sad and upset” like the rest of the Greenwich High School community to learn that the main gyms were closed due to the water leak.

“We encourage the Board of Education to not only make the necessary repairs to reopen the gyms as soon as possible but to also make the interim repairs to the PAC so we do not experience another water issue,” the GAF said in their statement.

GAF said they were proud of their donation of bleachers for the gymnasium, which was their first project and hope to have fans sitting in them very soon.

Since donating the gym bleachers, and more recently paying for temporary scaffolding to hold up the condemned home side bleachers in cardinal stadium, and pay the rental for 6 months, the GAF, acting again as a pubic-private partner with the district, has offered to help fund the Cardinal Stadium project.

That project calls for new bleachers with buildings and bathrooms underneath.

A special BOE meeting on Jan 7 was attended by Rob Burton and Rich Fulton of the GAF.

Mr. Burton said the GAF was prepared to pledge at least $1 million to the Cardinal Stadium project and received a round of applause. “We think this is long overdue. We want to get this done and move on to the next project.”