After voting 6-2 in favor of a GHS 4th quarter grading policy with a pass/fail option, and the announcement final exams are canceled, the BOE turned to the budget.

Some are calling the BET’s “decision day” vote on the schools budget  a “flat budget” and others are calling it “a $3 million cut.”

That vote was along party lines, with Republicans, who control that board, outvoting Democrats.

Peter Bernstein, BOE chair, said, in his view the BET vote was more akin to a $4.5+ million cut, given this year’s $1.5 million deficit mostly due to out-of-district special education.

“I fully believed there would be cuts to our budget, but it was a question of how much. And unfortunately the cuts the BET voted on already are just too deep,” he said, adding that the existing 19-20 budget already had a staffing model that increased class sizes at middle schools and the high school.

Greenwich Schools COO, Sean O’Keefe did have some good news. He said there would be savings based on the Covid-19 school closures, including transportation and substitute teachers.

Superintendent Dr. Toni Jones said that on Saturday she had sent the BET a memo outlining $738K of additional possible cuts beyond the “culling” that had already been done in order to come in with no more than a 2% increase.

In Jones’ note to the BET she said when students do return to school there might be adjusted schedules with morning and afternoon sessions, and only two days per week at school for each student.

Also she noted that additional families may move from New York City to Greenwich, and that private school families may switch their children to public school.

“We started working on this immediately,” Jones said Thursday night. “When I heard about this (last Thursday), we started going through the budget line by line.”

Christina Downey said she was deeply concerned about the cuts to the operational budget.

“I have to express my frustration and disappointment about how the BET’s budget process transpired in the last 10 days,” Christina Downey said. “Only after the final public hearing were we advised to cuts to the proposed operating budget. It was a 7-6 vote, not a unanimous vote. The taxpayers were also denied a chance to comment. There have been maybe 1,000 emails (from parents) in the span of only a few days.”

Meghan Olsson, who is a teacher in another school district, described the cuts as devastating. “It will impact the classroom and have a detrimental effect on student wellness and achievement.”

Besides, he said, “They didn’t cut (the schools budget), they just said you’re getting the same as last year.”

Mr. Sherr in his letter to the editor ‘Stay Calm – Our Schools are Funded,’ said the BET had protected public education in Greenwich in the worst economic disaster of a lifetime. He said a $3 million increase would raise staff and executive administrators’ paychecks next year.

“I have great confidence in the teachers and staff that we’ll continue to provide a gold standard of education on any budget we have because we are Greenwich,” she said.

Mr. Sherr segued to a discussion of political partisanship.

“I was here the last time the State of Connecticut cut the legs off our contributions. There are people on the BET who were then on the BOE who would not speak out against the cuts because of their political party,” he said.

Democratic BET members Leslie Moriarty and Laura Erickson were previously on the BOE.

“We need to be careful with the rhetoric,” he said.

The discussion grew contentious on the topic of partisanship.

“In my years, the BOE has only voted for items on a 4-4 basis when it comes to electing a chair,” chair Peter Bernstein said.”Otherwise, education has not been a partisan issue.”

“Greenwich is a different place. A special place. A place where people are really generous,” he said. “I would hope all of us would resist the temptation to slide into vilifying people, really dragging in party politics to this. I’d ask the public too, to be careful.”

On Sunday, the day before BET decision date, about 150 cars full of public school families organized a drive-by protest outside town hall. Among the participants were school teachers and Democratic BOE members. 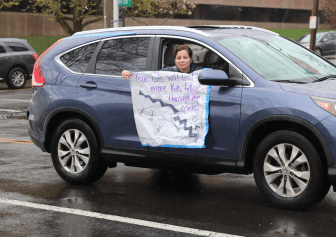 He said there were unfounded rumors circulating, including the closure of Parkway School and elimination of the gifted program, which he said resulted in raising parent anxiety.

“We have an obligation not to feed and tune-up the public….Someone is circulating a ‘wanted poster’ with the faces and names of six members of the BET.” – Peter Sherr

“I think that’s clever. A wanted poster in Greenwich, CT! I can remember a couple out-of-hand parents, who when some of us made decisions about start time, they posted my face and Gaetane’s (former BOE member Gaetane Francis) face – a Republican and a Democrat – with a bull’s eye on our face. That kind of stuff is not helpful.”

“We need to guide our new employees who may not understand the dynamic in Greenwich and what is accepted,” Sherr added.

For his part, Mr. Bernstein praised Dr. Jones and O’Keefe.

“You have adapted amazingly well to our town and received many positive comments,” he said. “It’s a testament to both of you. You’ve rolled your sleeves up.”

Bernstein, who noted BET members were present on the Zoom meeting, made a plea for them to come back to the table, compromise and find a middle ground.

“They have the ability to do that until the budget is submitted to the RTM next week,” he said. “If we can mitigate this cut in any way, that would be amazing.”

Bernstein had the last word. “We’ll be coming back to school in a very different way. Knowing our budget is in place with a little security for our staff is very important.”