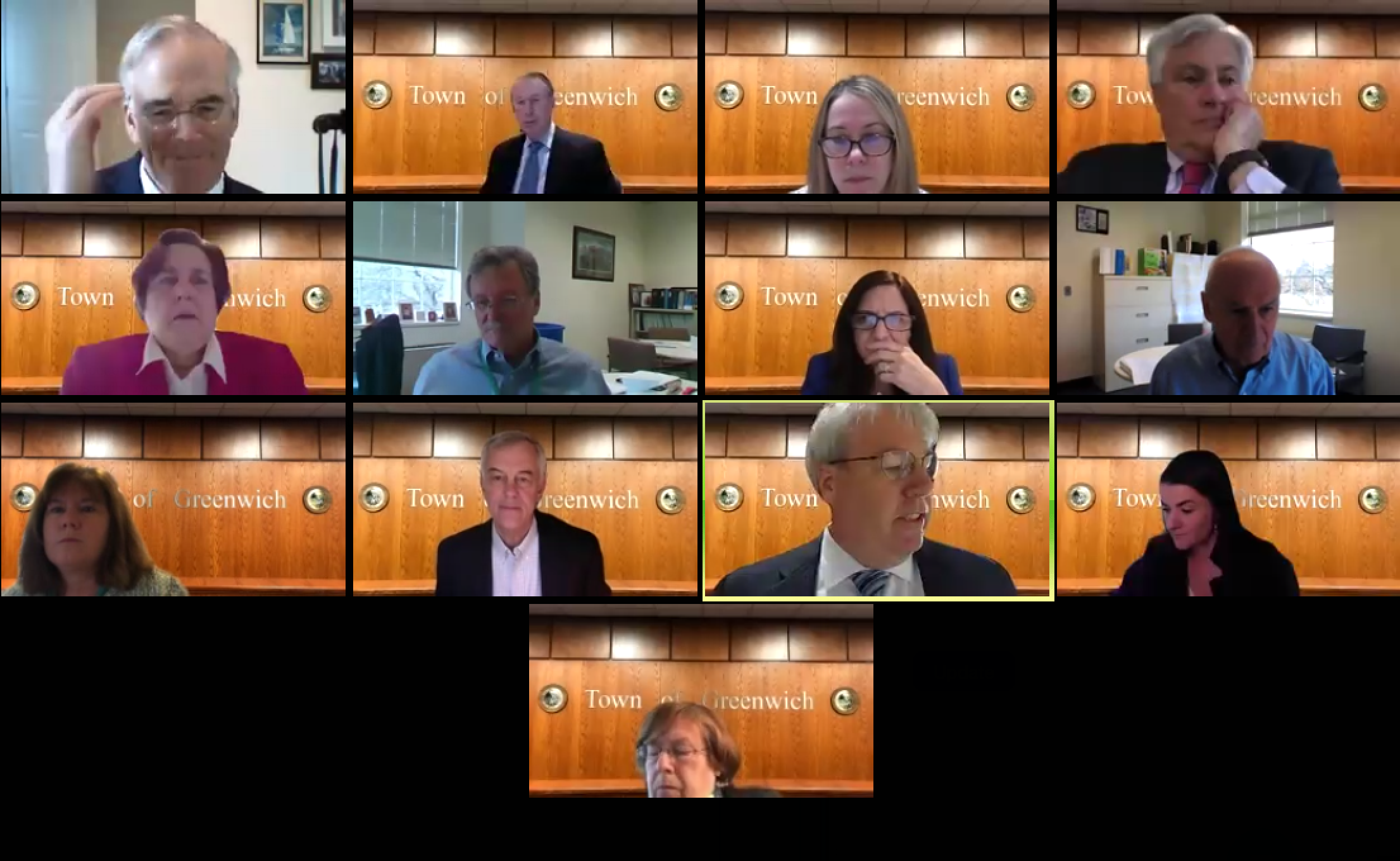 On Monday, the Board of Estimate and Taxation’s “decision day” was ten hours long. At the end of the day the $448 million operating budget was passed, reflecting a significant dip from the original proposal of just under $460 million.

The morning started with two hours dedicated to Greenwich Public Schools budget, during which about 200 people tuned in via Zoom.

BET chair Mike Mason said at the outset, “Decision day is not a debate day. It’s a day to make a choice.”

Yet there was debate, and the tone was contentious as the board’s Democrats urged a smaller cut of $700,000, and the Republicans proposed sought a $3 million cut.

Republicans said that with the the economic impact of COVID-19 uncertain, the larger cut was necessary, and that interim appropriations might be possible for public schools if conditions were to improve.

All the BET members said they had been inundated with emails about the schools budget. 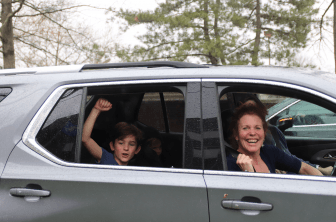 On Sunday hundreds of cars descended onto Field Point Rd in front of town hall in a horn honking protest to schools budget cuts.

During discussion, David Weisbrod described the cuts to schools as extraordinary and damaging.

“There is a reason we have hundreds of emails in our inboxes. They need to be addressed, listened to and incorporated in our deliberations,” he added.

“I’ve seen us attacked as not being involved in the schools,” Mr. Mason said, adding, “Draconian means if I don’t like it, I call it Draconian.”

Karen Fassuliotis said, “I have listened intently to my Democratic colleagues. Where I disagree with them is that our community is not doing fine. One in five Americans are not doing work. To continue as if nothing is happening, in my opinion is reckless.”

“Don’t think Democrats are turning a blind eye to the coronavirus,” Mr. Weisbrod said. “We’re all fiscally oriented on this BET, and recognize cuts are necessary. The difference is that we look at our schools and see it in a different perspective…The schools are a place where we have to be especially thoughtful at a time like this.”

Debra Hess talked about the uncertain future. “We can always add money back in the budget, but we can’t take money away. That’s what I grapple with. We may have more clarity in 6 or 9 months…I hope the world comes back to normal. But we just don’t know. I don’t want to be sitting here in a year or two saying we could have done more but we didn’t.”

“These proposed operating numbers are basically flat with the current year’s budget,” Leslie Tarkington said. “There isn’t an actual decline.”

Beth Krumeich urged Republicans to lessen the reductions in the schools budget.

“Children can’t be deferred. They’re spending their time at home with their parents trying to work with teachers and stay on top of their work,” she said, adding that she had read hundreds of emails from parents, and that about 150 families had turned out in their cars to protest cuts on Sunday.

“I think it is very important to recognize these decisions have consequences we can’t even begin to wrap our minds around,” Krumeich continued. “It’s the life of these children. It’s their education. And I’m very concerned that somehow we are giving short shrift to the needs of the special education community. That hasn’t changed because of Covid-19.”

“We’re all struggling. That’s a true statement,” Mr. Mason said. “I don’t think anybody enjoys the virus or making any of these decisions.”

Leslie Moriarty said the BOE is unlike other town departments because they plan ahead for a school year, and that mid-year interim appropriations aren’t a solution.

Democrats pointed out that most of the school employees are union employees with labor contracts the town must meet. Teachers contracts calls for about a 3% increase year over year.

“They have higher salary increases than other departments. They need to make decisions today about what services they will provide for the year. They can’t wait until mid-year to add more teachers,” Moriarty said.

Further, she said, “Distance learning, most likely, is not getting the academic achievement from our students that we need – that’s across all students. We have to look specifically at the special ed population, which must be even more impacted by distance learning because they’re not getting the hands-on services like OT and PT and other services they require.”

Weisbrod said the situation required leadership. “Irate parents all over town are protesting such an arbitrary process. A leader does not dictate to these bodies and expect them to salute.”

Weisbrod said the current economic situation under the pandemic was unlike the recession in 2008 and 2009.

“Extraordinary measures were taken by the BOE including reopening labor negotiations,” he said. “It was result of collaborative discussions over several months. That’s a far cry from being given a fiat on a Thursday and no public hearing process. Today’s context is so different from ’08 and ’09. Back then schools were open. Class size was not subject to social distancing, and teachers didn’t face anything like the challenges they are today.”

“Leadership is more than giving an order and telling a department to go figure it out,” Weisbrod added.

Mr. Ramer talked about special education in the context of the $3 million cut.

“In repetitive litigation, the town has done poorly, and for the most part the courts have been imposing the incurring of expense that the system had been unwilling to spend,” he said. “There has been enormous growth in the sums that we’re spending for out-of-district tuition and settlements.”

He noted the BOE is running about $1.2 million deficit, and has requested additional funds.

“The hole is not just the $3+ million. It’s the additional $1.5 million for the special ed deficit,” he said.

Ms Hess said she understood Ms Moriarty’s point about planning ahead for a school year.

However, she said, “I don’t know if the BOE will know what next year will look like in the next four weeks. It’s still evolving.”

“Are we going to have gym? What type of intramurals? Will we go to every other day? Do we need to cut up the day?” Hess asked. “In a normal scenario I would agree with Ms Moriarty that they need to know up front, but, in this ever changing world where we don’t know what normal will look like. The circumstances are different.”

Laura Erickson, who was formerly a member of the BOE, said she was concerned about lack of public participation during the budget process.

“On the BOE side, there is significant public commentary,” she said. “On April 23 we had a BET public workshop and discussed cuts to operating an capital budgets after the public comment period had closed. In the absence of that public participation, we don’t have the best information.”

“If this $3 million cut goes through, the RTM does not have the opportunity to restore it. They can only delete funds,not add back funds. That is not a good process,” Erickson said.

Miriam Kreuzer said, “I could understand why the superintendent would be shocked to hear the news of up to $3 million in cuts to her budget, in the middle of the pandemic and distance learning. We went from an interim appropriation to a big cut.  Is COVID-19 really the scapegoat for this?”

“Will the long lasting effects require staggered schedules, more cleaning and mental health experts. No one knows, but to ask our superintendent to make guestimates and large structural changes amidst a pandemic – and to spring these onto parents after public comment, which was pointed out, by 1,000 email writers, shows lack of transparency,” Kreuzer added.

Karen Fassuliotis said the feedback she had received from townspeople was that the proposed cuts were not deep enough.

“We’re hearing from people they don’t know how they are going to pay their property taxes, even with a deferral. We are all in this together and we all have to make sacrifices. I don’t think it’s a drastic reduction in services. It’ll take a lot of heavy lifting but I think it can and will be done.”

Mr. Mason said, “We all know the Parks & Rec Dept is returning fees collected, and not hiring summer help. The BOE can’t save too much money because the Governor, the State has told them they must maintain their staff through June 30. But the big picture is to take a holistic look at things, and a realistic look. Their hiring could be in transportation or many other things.”

A the vote on an amendment to increase the education budget by $2,368,784, which would reflect a $700,000 reduction, went along party lines with Democrats Beth Krumeich, Leslie Moriarty, Jeff Ramer, David Weisbrod, and Laura Erickson all voting yes, and Republicans Leslie Tarkington, Debra Hess, Mike Mason, Andy Duus, Bill Drake and Karen Fassuliotis all voting no.

On Tuesday morning, on WGCH 1490, Mr. Mason said he had’t liked the tone of the meeting and didn’t like to see the community divided, but he said the cuts were necessary, given that costs are spiraling, including pensions and health care for town employees.

He said the differences boiled down to “judgement calls” rather than politics.

“Just yesterday we got a note from the State that health care is going up 9% effective Oct 1. That’s $63 Million going up 9%. Our pension plan is down 28% – that’s $80-90 Million right there. That will spike an increase in the next budget of an additional $5 to $6 million contribution.”

“It’s not a fun time, but we can’t just keep raising taxes,” he said. “The real disagreements were on the schools. We didn’t cut the schools. We took every operating budget in the town, across the board, and reverted them back to the fiscal 2020 level.”

“The BOE has just as many tools as everybody. They control their programing. They negotiate their transportation,” Mason said. “The question is, ‘Are we going to return to normal?'”

The budget next goes to the 230-member Representative Town Meeting, who will vote on June 8.