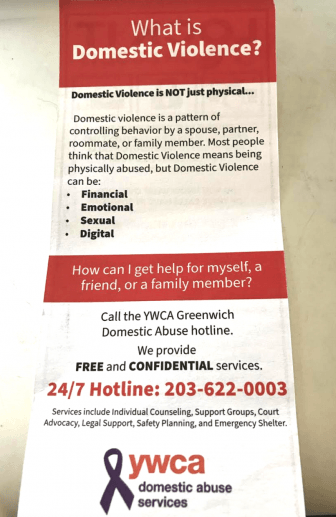 Soon Greenwich residents will receive tax bills in the mail for real estate and supplemental motor vehicle taxes. Tax is due on January 1. It must be paid on or before February 3 to avoid interest.

The bill will contain a two-sided insert with one side dedicated to information from YWCA Greenwich about Domestic Violence.

Since 1981 the YWCA has helped thousands of women, children and men who are victims of domestic violence, which is not just physical. 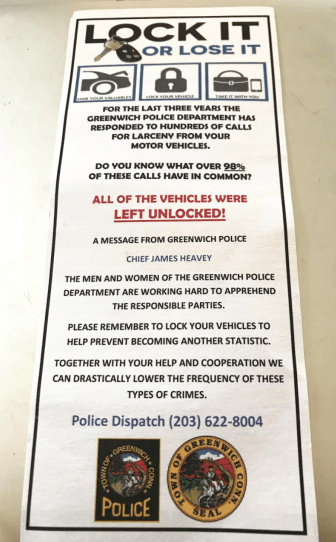 On the flip side is a plea from Greenwich Police for residents to lock their cars.

For the last three years the GPD have responded to hundreds of calls for larceny from motor vehicles and theft of cars of Greenwich residents.

Over 98% of these incidents involve cars left unlocked.

This week on WGCH Chief Heavey said he had worked with outgoing Tax Collector on an insert with the reminder: “Lock It or Lose It.”

Heavey mentioned recently two cars that were stolen from the same driveway – both unlocked, both with the keys left in them.

“We were an easy mark for probably $150,000 worth of cars,” he said. “We recovered the cars, but the vehicles had some damage. I can only imagine the inconvenience and the cost of having those cars towed back. They were recovered from various locations in Connecticut and New York.”

Heavey said if police weren’t so busy responding to calls of stolen cars and conducting investigations, they could direct their work toward something else.

Also, he noted insurance premiums are higher because of stolen cars.

“It’s all kinds of streets – little dead end streets, and all over town,” he said. “They don’t know the neighborhood, they’re just looking for cars. And they know Greenwich is an easy mark because of the exposure they’ve had to other criminals who say down in Greenwich they don’t lock their cars.”

Heavey he said some times people forget to take valet keys out of their glove boxes and that could be another resource for a potential theft.