The Greenwich Police Department regrets to announce the death of Police Officer Justin Quagliani. At approximately 5:00am Tuesday morning Officer Quagliani suffered a medical emergency at his Greenwich residence while off-duty.

According to a statement from the office of Chief Heavey, Police and Greenwich Emergency Medical Service personnel responded to his residence, attempted lifesaving efforts and then transported him to Greenwich Hospital where he was eventually declared deceased.

The cause of death has not been determined, but there is no sign of foul play.

Notification of next of kin is on-going.

“We wish to extend our heartfelt thoughts and prayers to the family and friends of Justin and ask the public for its support during this difficult time,” Heavey said in the statement.

First Selectman Fred Camillo issued a statement Tuesday night saying, “During the four years he has served the Greenwich Police Dept, Officer Quagliani continuously demonstrated that he possessed the qualities and the abilities to be an asset, not only to the Department but to the entire Greenwich community. My thoughts and prayers are with his family and his police brothers and sisters who mourn his sudden passing.”

Camillo has asked that Town flags be flown at half-staff in Quagliani’s honor.

Prior to joining the Police Department in 2015, Officer Quagliani served in the United States Army and had attained the rank of Sergeant. He served as a MP during Operation Iraqi Freedom.

There is no further information available at this time and any future releases will be through the Greenwich Police Public Information Officer.

In the summer of 2017 Officer Quagliani made headlines when he interrupted a vicious dog attack and saved a dog’s life.

On July 3, 2017, Officer Quagliani responded to an address in Byram on a report of past dog bites. The victims were two Golden Retrievers.

During the visit to the owner, an elderly woman, Officer Quagliani said her dog, which he described as weighing about 70 lbs, very athletic and broad chested, got loose.

Officer Quagliani said that while he was interviewing the dog owner, he saw her dog jump a 3-1/2 foot fence and bolt. He said he went to retrieve the dog but lost site of him briefly. A short time later, he saw a pedestrian walking a small King Charles Cavalier when the larger dog emerged from some bushes and went after the smaller dog and started rag-dolling him.

The owner was trying to save his dog when Officer Quagliani arrived and kneed the larger dog in the ribs to loosen its grip. The officer next jumped on top of the dog and initiated a choke hold, getting his wrist bitten in the process.

As Officer Quagliani held the squirming dog down, he was unable to get to his squad car to use his radio. When a female witness offered to assist, Quagliani asked her to take his keys from his pocket and go to his squad car to retrieve a snare, which he then used to gain control of the dog. The elderly woman was charged with allowing her dog to roam and for failing to provide vaccine information. 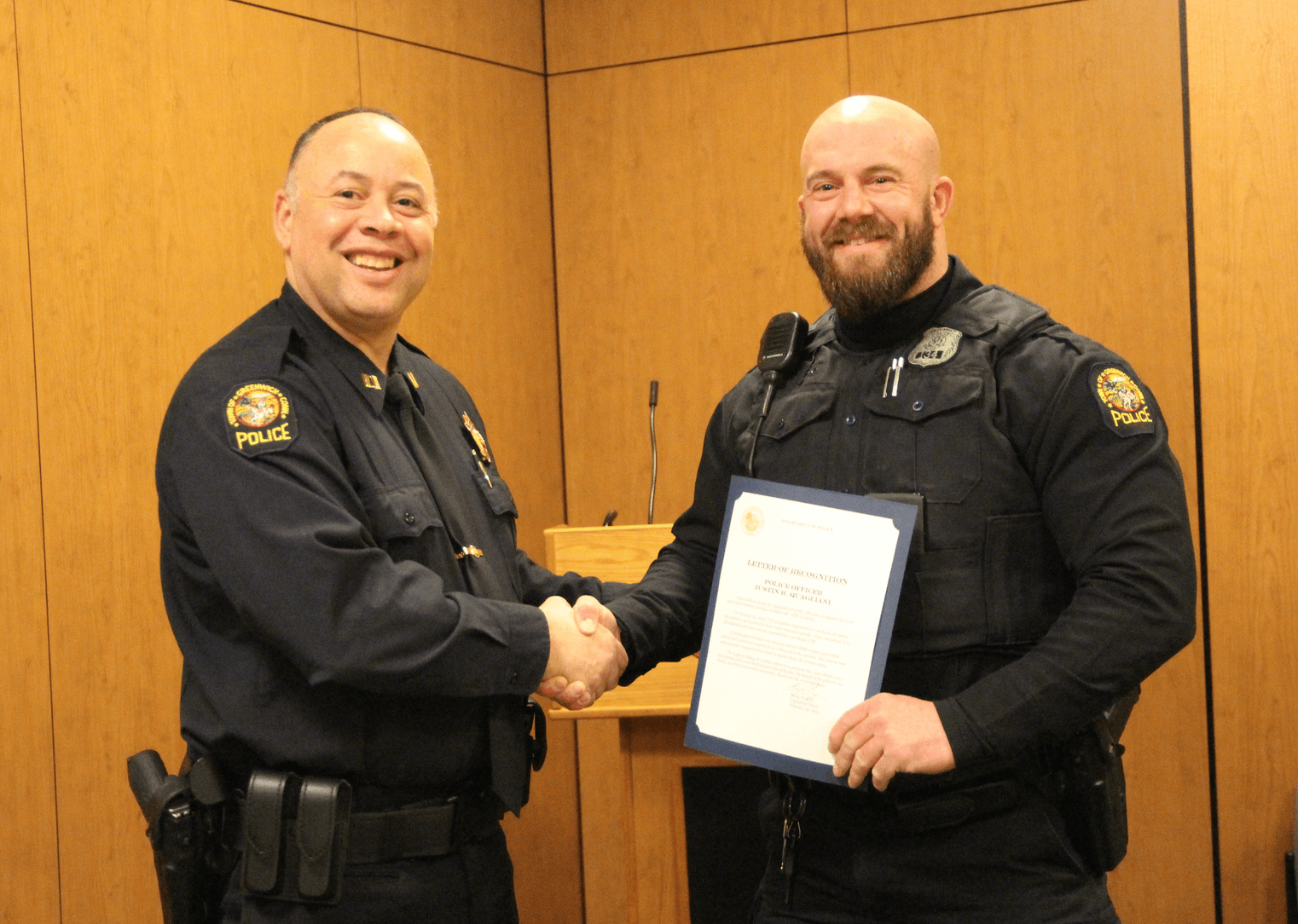 Last February Quagliani was presented a letter of recognition for his quick intervention during a medical call on Jan 25, 2019. Officer Quagliani responded to a medical call where the patient was reported to have had a syncopal episode.

Syncope results from a temporary reduction in blood flow and subsequent shortage of oxygen to the brain. This leads to lightheadedness or a “black out” episode, a loss of consciousness.