On Thursday Lt Kraig Gray presented Officer Justin Quagliani with a letter of recognition praising him for his quick intervention during a medical call on Jan 25, 2019. Officer Quagliani responded to a medical call were the patient was reported to have had a syncopal episode.

Syncope results from a temporary reduction in blood flow and subsequent shortage of oxygen to the brain. This leads to lightheadedness or a “black out” episode, a loss of consciousness.

According to the letter, Officer Quagliani turned over primary care to GEMS medics upon their arrival and continued to assist in providing aid to the patient, who was then transported to a local hospital where she is recovering.

“The highest calling of a police officer is to preserve life; your efforts are a true testament to your dedication to this principle. On behalf of the patient, her family and the Greenwich community, thank you for a job well done,” Captain Gray wrote in the letter of recognition.

After presenting the letter, Captain Gray said, “This happens more often than people realize. We don’t always advertise it.”

Gray said that in the the chain of survival, early notification of EMS is key.

Officer Quagliani, who has four years on the Greenwich Police force and is EMR Certified and now wrapping up his EMT, said any situation like the one he was recognized for is always a team effort. 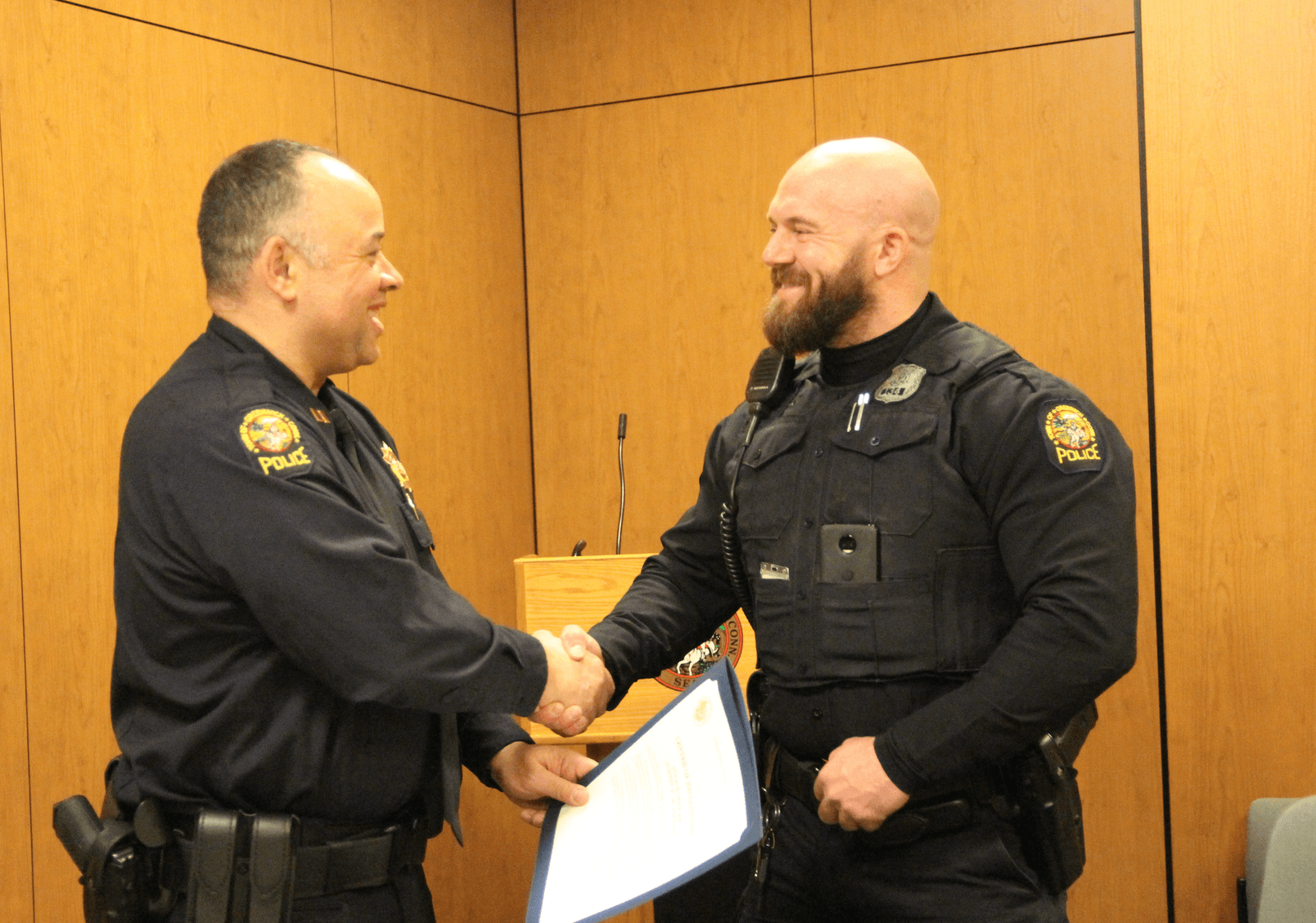 “It gave me more confidence on scene being an EMR emergency responder,” Quagliani said.

Captain Gray said the transition from EMR to EMT is important as the latter is a more difficult certification. “It takes some time,” he said. “The majority of our officers are certified EMT or working on it.”

“I was the only officer on scene, but our hospital staff also was there immediately. The GEMS medics were there and they’re very good at making sure we’re hands-on and giving us additional instructions,” he added.

In an incident last year Quagliano provided aid to one of the department’s retirees, prolonging his life for several hours.

“We gave him two or three more hours,” Quagliani said. “He was with his family at the end.”

“Sometimes we prolong someone’s life just long enough for a family member to get there to say their goodbye,” Captain Gray said.

Many may remember how in 2017 Officer Quagliano pulled a 70 lb dog off a King Charles Cavalier in Glenville, likely saving the smaller dog’s life.

At the time, Quagliani saw a pedestrian walking the small dog, “Buster,” when the larger one emerged from some bushes and went after the smaller dog and started rag-dolling him.

The owner was trying to save his dog, Buster when Officer Quagliani arrived and kneed the attacking dog in the ribs to loosen its grip.

The officer next jumped on top of the dog and initiated a choke hold, getting his wrist bitten in the process.

As Officer Quagliani held the squirming dog down, he was unable to get to his squad car to use his radio. A witness got Officer Quagliani’s keys from his picket and retrieved his snare from his patrol car. He was then able to gain control of the dog.