Communities along the South East coast are bracing for Florence which has rapidly intensified into a Category 4 hurricane. Florence is now likely to strike there on Thursday and life-threatening storm surge and destructive winds are expected. According to the National Weather Service, tropical storm force winds may arrive there on Wednesday night.  Florence is also generating dangerous surf and rip currents along the East Coast.

Greenwich Harbormaster Ian MacMillan issued a set of tips and reminders to Greenwich mariners on Monday.

“A Hurricane soon to smash into our American coastline, it is time for your State Harbormaster to speak up,” he wrote. “Keep in mind that when we dredge our Harbor of Refuge to suggested Army Corps of Engineers original specifications, I would be able to offer a land locked 6 to 7 foot deep at mlw safe harbor of refuge and flat water for any mariner in need, all near the I-95 Exit 3,” he said, lamenting how the harbor has filled in. “As it is, it is a mudflat with altitude at mlw.”

MacMillan’s first advice is a reminder about the value of life jackets or Personal Flotation Devices.

He offered the following steps to prepare vessels in the event of a storm, but said these actions should be practiced as a standard, since unnamed and unpredicted storms can also cause significant damage.

Hurricane Awareness
Hurricanes are severe tropical disturbances which originate over water, gradually intensifying as they move over the ocean in erratic but sometimes predictable courses.

A tropical storm which has wind velocities of over 74 miles per hour is classified as a hurricane.

In addition to high winds and torrential rains, these storms are accompanied by large seas, abnormally high tide, and create possible tidal waves along the storm’s path.

Hurricane Preparedness Steps
In order to best protect your boat in the event of a hurricane or other storm, the following guidelines can be followed:

Remove your boat to a safe harbor
If at all possible, boat owners should attempt to have their boats hauled out or relocated to a sheltered harbor. Greenwich has three nearby. The Byram River, Greenwich Harbor and The Stamford Hurricane hole behind the hurricane gate on the Northeast of Stamford Harbor. Captain Harbor is dangerously exposed to any southerly winds. Waves can build very quickly, and reach a height where even the inner Greenwich Harbor offers very little protection. For thirty years Greenwich has lacked a maintenance dredge of the Federal Safe Harbor of Refuge.

Reduce windage
Remove anything from your boat that can catch wind and may become
airborne.

This can include:
● All flags or anything from rigging, e.g. radar reflectors.
● Dodgers, biminis, or other removable canvas.
● All sails including roller furling, mainsail, and boom if possible on smaller boat. Alternatively, lash down with line and additional sailties.
● All other cruising-type items in lockers or below deck (propane, fuel, anything flammable placed ashore or in ventilated lockers.) Rig a storm bridle i.e. secondary bridle tied around your mast or primary winches.
● A storm line or bridle can be attached to your bow cleat at all times. Attachment should be verified prior to a storm.
● This is rigged as a secondary bridle alongside the primary bridle. This bridle should have slack in it compared to the primary bridle and only engage if the primary fails. Use chafing gear.

Remove and stow anchors
Remove all anchors from the bow of your boat. Anchors, especially plow anchors, can act like knives in rough seas and cut mooring bridles. Any boats left unattended on moorings for extended periods of time should follow this procedure as a standard practice. Inspect chocks and cleats.

Make sure that chocks have no rough edges that can cause chafe, and make sure cleats are securely fastened to the deck. During rough seas little can be done to prevent a bridle from chafing on a burred chock.

You may use chafing gear with some liquid soap to lubricate. Leave your boat unlocked, batteries charged and on, keys in ignition.

Check your bilge and pumps. Keep a flashlight handy and your contact information.

On a dock or slip
Extra lines, extra fenders and keep the lines from being too tight. Be sure to have fenders between your boat and your neighbor’s boat as well as the dock.

It is possible to aid in the recovery of vessels, but this is greatly helped if the boat is easily boarded and gotten underway. The person helping you or your vessel in an emergency will likely be unfamiliar with your boat. It is also important to have extra fenders, dock and towing lines available in an obvious and easily accessible place.

Conditions may prevent launch and tender services from operating at certain times. In case of emergency or danger, the mariners nearby will do whatever is practicable to insure the safety of yachts belonging to the others, but neither they nor the professionals assume any responsibility for such yachts.

If conditions warrant, the State Harbormaster may suspend the launch, and tender services at his discretion until such conditions pass.

The launches and private tenders may not be operated at any time by other than by designated captains and in this case the Harbormaster’s decision is final. 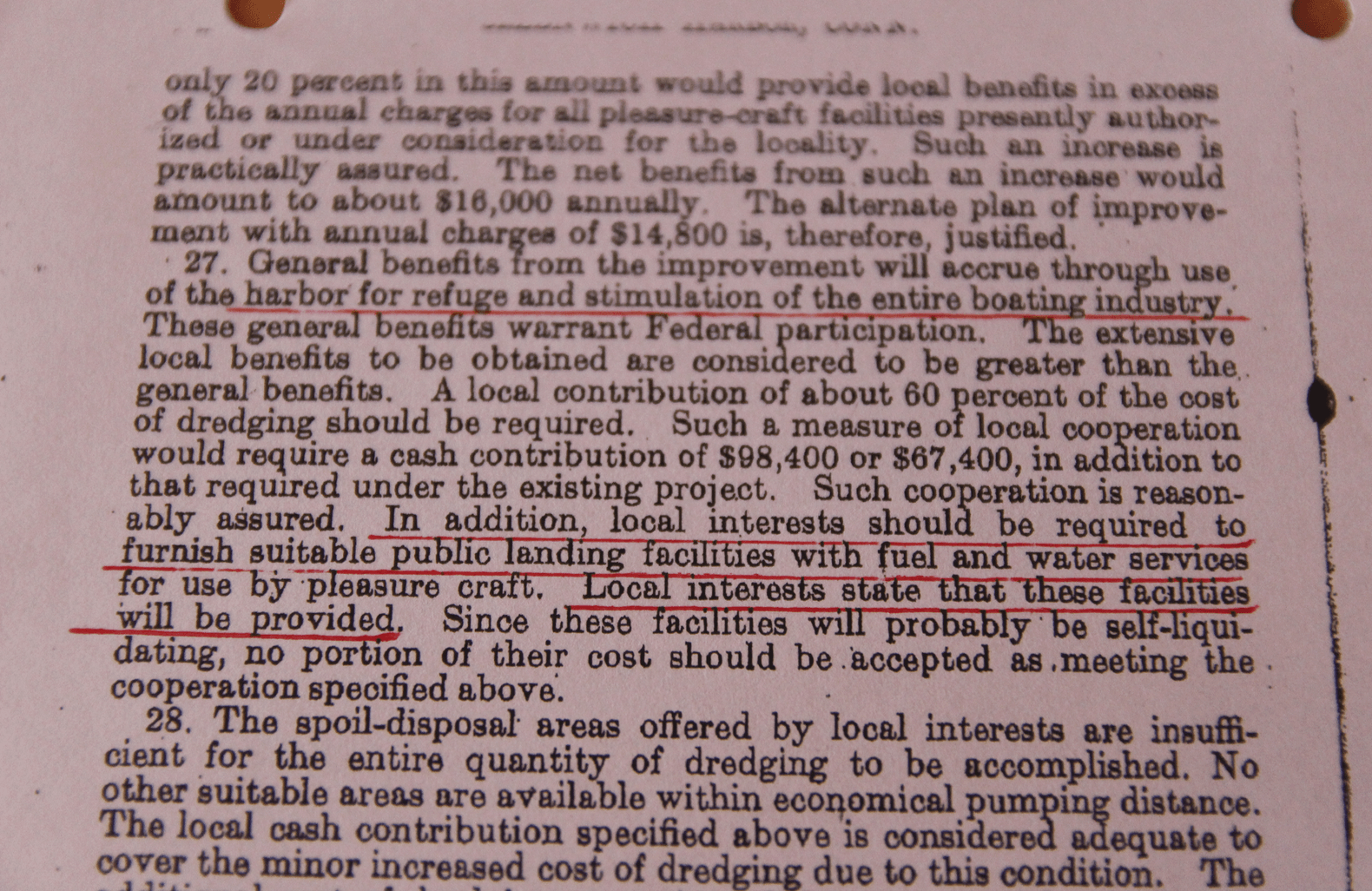 1947 Letter from the Secretary of War to the 80th Congress, document no. 272, talks about dredging and refers to Greenwich Harbor as a “harbor for refuge and stimulation of the entire boating industry.” It also says, “local interests should be required to furnish suitable public landing facilities with fuel and water services for use by pleasure craft. Local interests state that these facilities will be provided.” 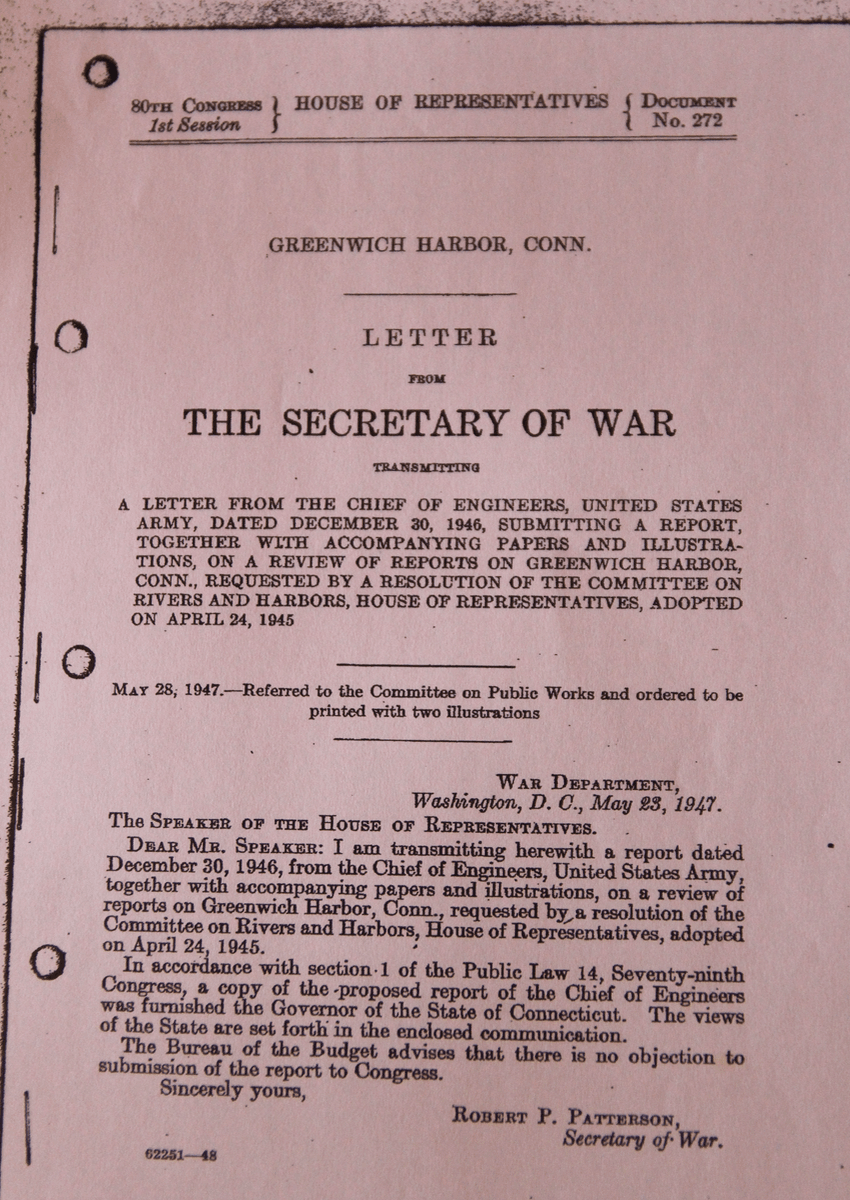