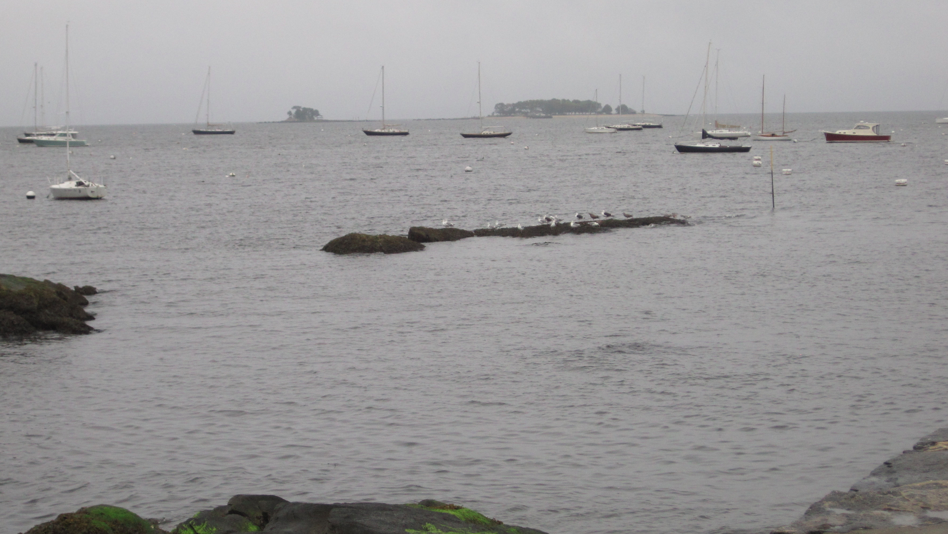 The most important issue I face today is to alert the Mariners and coastal residents to the Hurricane Arthur coming up our nation’s coast line. It is predicted to stay off shore and pass us Friday to the South.

Its easterly winds in excess of 80 knots will push a surge before it that will impact Long Island Sound.

Please use this opportunity to check your hurricane check list and be sure you have good chafing gear on your mooring lines and that your boat is ready for storm conditions prior to the blow. Be sure your bilge pumps and batteries are in ready condition. The storm should pass by Saturday morning. Don’t hesitate to call, email or text the Harbor Master with any questions.

I stood one day by the breezy bay
Watching the ships go by
When an old tar said, with a shake of his head
“Gee, I wish I could tell a lie.”
“I have seen some sights that would jigger your lights
And jigger my own forsooth
But I ain’t worth a darn at telling a yarn
That wanders away from the truth.”

“I was on the barque, the Nancy Stark
Just a league and a half at sea
When Captain Snark, with a troubled look
Comes up and says to me:
“Bosun Smith- make haste forthwith
And hemstitch the spanker sail
Accordian pleat the forward sheet
She is going to blow a gale”

I straightaway did as the captain bid
and no sooner the job as through
Than a north wind crack took us dead aback
And murder and lights how it blew!
It blew all the tars right offen the spars
And the spars right off the masts
And anchors, and sails, and kegs, and nails
Went away on the wings of the blast
The whole ship shook as she blew the cook
Out under the starboard glin
And pots and pans, and kettles, and cans
Went scattering after him.

She blew the fire right out from the stove
And the coal right out of the bin;
Then she whistled apace past the Captain’s face
And blew all the hair off his chin
“Now wiggle me dead” the old man said,
And the words tore out of his mouth
We are lost, I fear, if the wind don’t veer
And blow in a while from the South

“Oh wiggle me dead” no sooner he’d said
Than the words tore out of his mouth
And with hurricane shout, the wind tacked about
And blew straight in from the South
We opened our eyes in wild surprise
But not a word did one of us say,
For in changing her tack, the wind blew back
All the things she had blown away.

She blew the tars back on the spars
And the spars back on the masts
And anchors and sails, and kegs, and nails
Which into the ship stuck fast.
The whole ship shook as she blew the cook
Up under the galley poop
And pots and pans, and kettles and cans
Without even spilling the soup

She blew the fire back into the stove
Where it burned in its regular place,
And we all cheered when it blew the beard
Back onto the Captain’s face

Captain Smith of the clipper ship Columbia from Bangor, Maine recited the above at a dinner held at the Palace Hotel in San Francisco in honor of the Columbia’s record breaking passage to the southern hemisphere.  Shortly thereafter, the Columbia departed. After she got outside the Golden Gate, she was never sighted nor heard from again.

Batten down the hatches boys, we are in for a blow!