It’s been an exciting summer for Greenwich’ Cal Ripken All-Stars as the 9u, 10u & 11u teams have each advanced past States to Regional play!

“Our players in all three age groups have played with great heart and determination. We have an incredible team of coaches, players and supportive families,” said Tom Casazzone, Executive Director at the OGRCC.

First it Begins with the 10’s:
In their district tournament in New Canaan, Greenwich set a District 1 tournament record by allowing no runs in their three games as they swept their way to the title. Next stop was the State tournament in Milford, where the competition proved to be more onerous. In their first game, Greenwich trailed RHAM by a run entering the bottom of the 6th, but came away with a walk-off 3-2 victory, courtesy of a 2 out blast off the bat of Jack Bylow.

That win was followed by a 10-0 win over South Meriden and a 4-3 win over West Hartford to reach the finals.

In the championship game, Greenwich faced a red-hot New Fairfield team who entered the game averaging scoring over 10 runs per game. No problem, as James Mora pitched a complete game, shutting out New Fairfield 2-0 and throwing a no-hitter to boot.

The 10u regional tournament is in Massachusetts where Greenwich has already reached the final game where they will face Windham, NH for the Regional Championship. 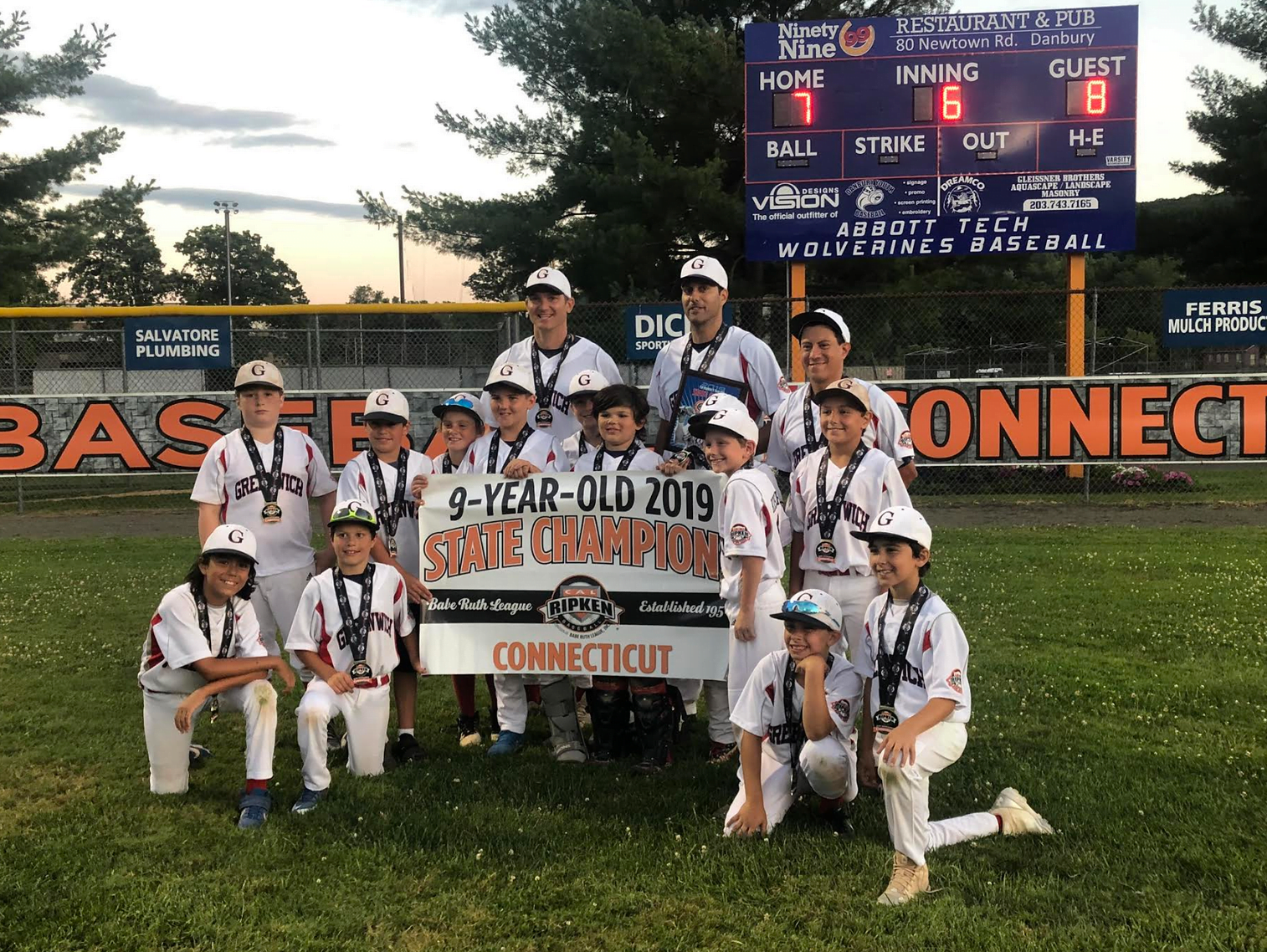 9’s Follows Coasting into the District Championship Game.
This team needed only one win in two games for the title but were upended in consecutive nights by a gutsy New Canaan team, 7-5 &amp; 14-13. Their performance in District play was strong enough to warrant an invitation to the 9u State tournament in Danbury. The tenacious play in their battles with New Canaan foreshadowed bigger things to come. And come they did.
Pounding out 40 hits in 2 games, Greenwich pummeled the competition in their first two games by a combined score of 39-17, scoring in each inning in both games.

Greenwich moved on to face the top seed, Danbury! A tight 0-0 game through 3, Greenwich broke through first with a run in the top of the 4th, only to see a confident Danbury team strike right back to take a 3-1 lead in the bottom of the inning. Never losing focus or confidence,Greenwich rallied to tie the game in the top of the 5th and held Danbury scoreless in their half of the frame to take the game into the 6th inning, knotted 3-3. And the boys kept rolling, scoring 5 runs in the 6th inning to Danbury’s 2 and Greenwich walked away with a well-earned 8-5 victory. But Danbury would be back, knocking off New Canaan 11-1 to earn a rematch vs. Greenwich.

Danbury would have to win two in a row to claim the title, and they took game 1 in a rain-marred game, handing Greenwich their worst defeat in tournament play, 16-3. The next night looked like it would be Danbury’s night again, as they cruised into the 5th inning with a 2-0 lead.

Then it got interesting. Greenwich exploded for 4 runs in a wild top of the 5th to take a 4-2 lead. Undaunted, Danbury countered with 3 runs of their own to retake the lead, 5-4 entering the 6th and final inning. Another stunning display of offense for Greenwich plated 4 more runs and an 8-5 lead heading into the bottom of the 6th. Danbury scored 1 run, then another, and had the winning run on base when Philip Tarantino struck out the last batter for a thrilling 8-7 finish. Greenwich now had its second State champion moving onto Regional play in Massachusetts. 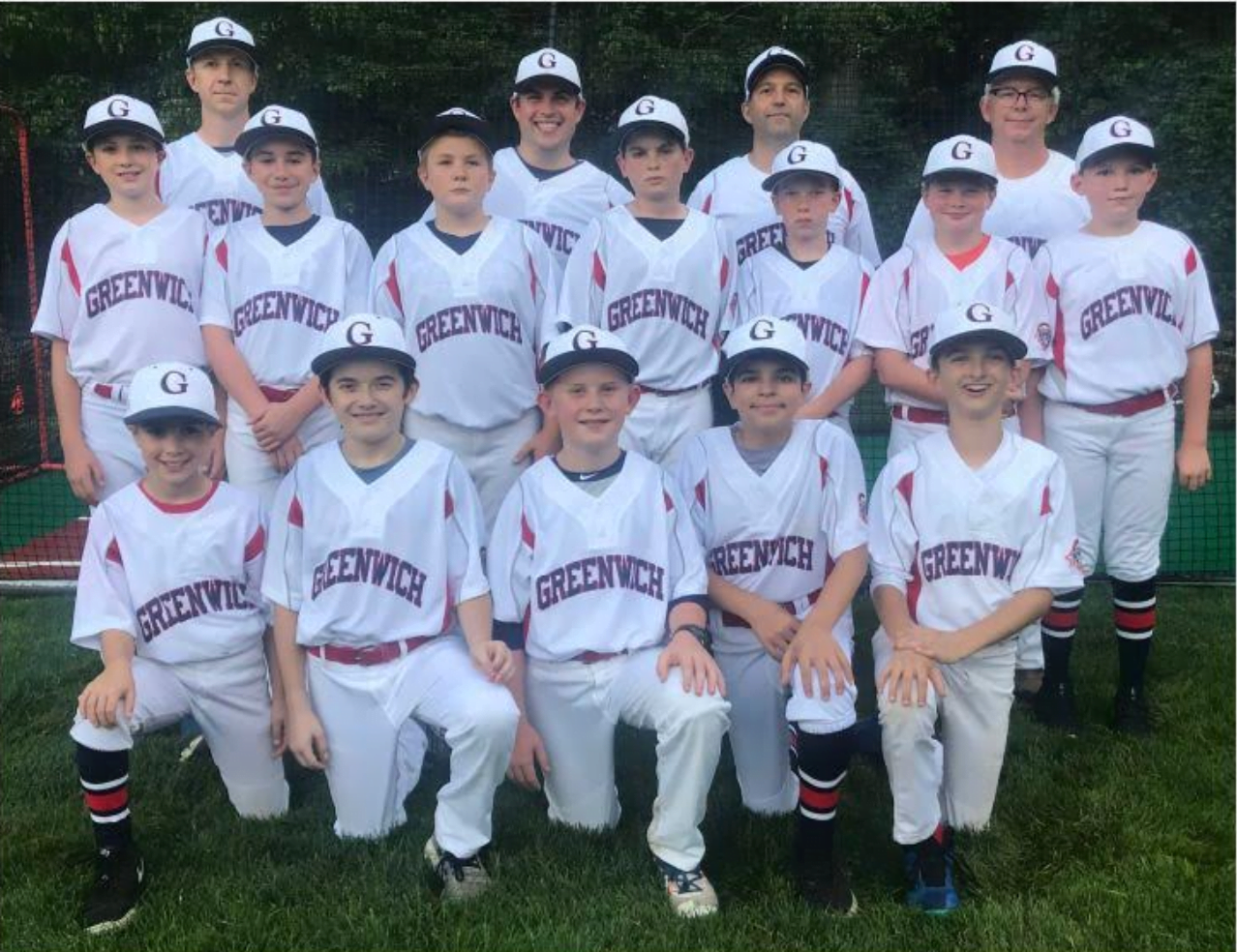 Greenwich Cal Ripken’s Outstanding Performance Continued with the 11u’s
The 11u team hosted the District tournament in Greenwich at Banksville field. There, they played well enough to move on to States.

In game 1 of the State tournament, Greenwich couldn’t get a lucky bounce and lost a tight 3-1 game to New Milford. It’s a long road out of the loser’;s bracket in a double-elimination tournament, but Greenwich took it one day at a time.

In game 2, Greenwich scored early and often, cruising to a 15-1 victory over Oxford. Next up was New Canaan who had beaten Greenwich solidly in Districts and entered the game with their ace rested and ready. But Greenwich exacted revenge and walked away with a hard-earned 4-2 victory. That was followed by another rematch, this time vs. game 1 opponent New Milford. Again, Greenwich exacted revenge, this time via late-inning heroics in a 3-2 victory.

Friday’s semi-final matched Greenwich vs. favored New Fairfield. Trailing 4-2 entering the 5th inning, Greenwich took their first lead of the game, 5-4, on a 2 out hit by Frank Kingsley.

Greenwich added 3 more in the 6th to earn a trip to the State finals vs. 2 time State Champion Norwalk.

It would soon be 3 times State Champion Norwalk. The breaks all seemed to go against Greenwich in their 7-2 loss. It looked like Greenwich&#39;s 11u All-Star run was over. Or was it?

The Connecticut State commissioner shocked players and fans as he announced during the award ceremony that the Greenwich team had made such a strong impression during their run at New Canaan that they too would be invited to the Regionals next week in New Hampshire.
The roster includes Nicky Amador, Will Bagot, Bater Conte, Jackson Cunningham, Connor DeSalvo, Aaron DiBernardo, Henry Graham, Mo Hood, Frank Kingsley, Hudson Schmidt, Hank Van Schaik, and Jayden Zych. Manager – Alex Hood. Coaches include Chris Schmidt, Frank DeSalvo, and Mark Bisanzo.

We hope that the community will join in cheering on the Greenwich Cal Ripken teams at the Regional Tournament! For more information, please contact the OGRCC offices at 203-637-3659 or follow along here: