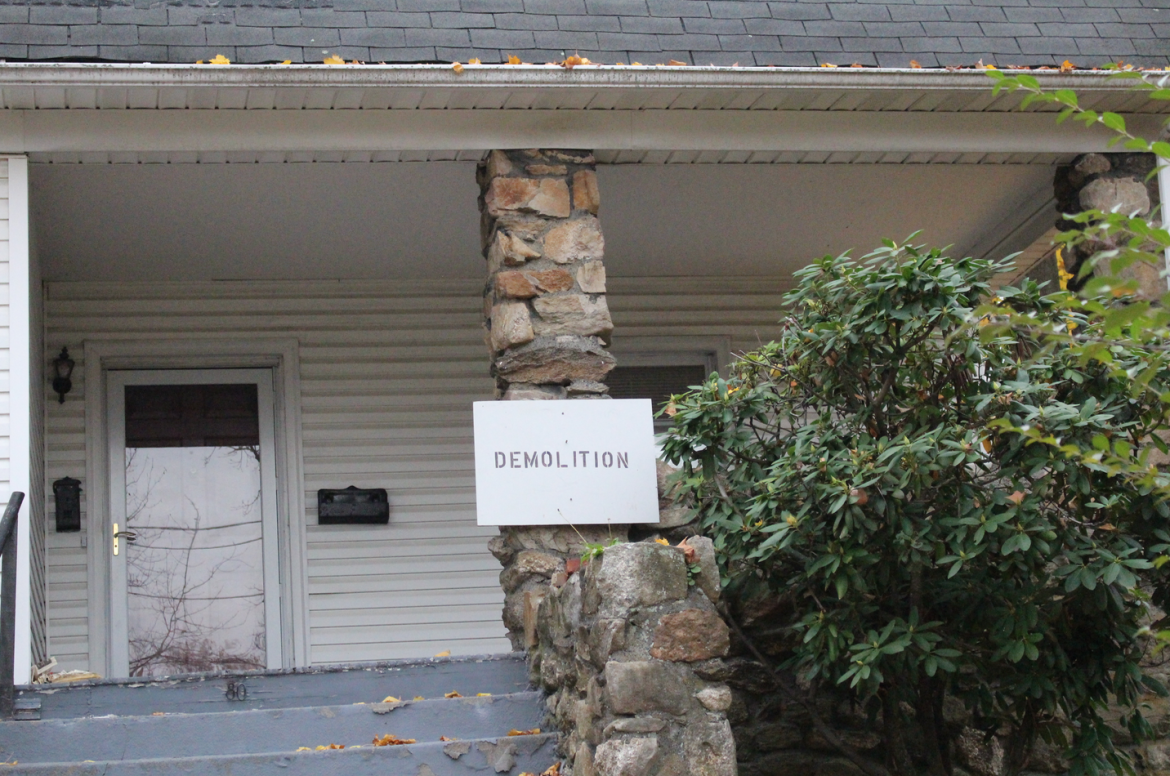 Attorney Heagney, who has represented several other applicants seeking to demolish old houses on Milbank Ave and replace them with larger homes or condominiums, fielded several questions from the commissioners.

Concerns included orienting of the two units sideways on a narrow lot. The width of the lot is just 60 ft.

There were also questions about sewer laterals,  parking and the streetscape.

“Certainly that’s something we need to show whether they can maneuver on site,” Heagney said when asked about the parking plan. “Whether we have tandem spaces or not, whether we pull out onto the street…” 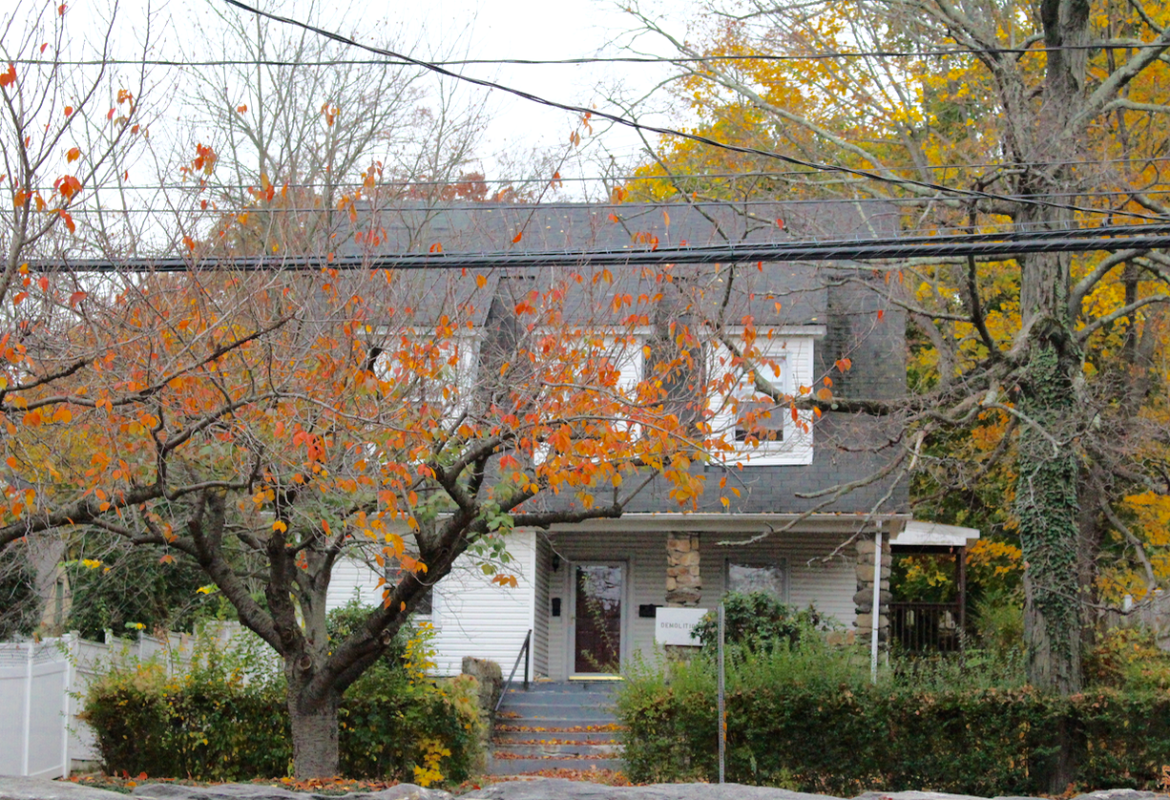 “The patio areas are 30″ inch stepping stones with lawn in between. It is meant to be permeable because there is lawn in between stones,” Heagney said. 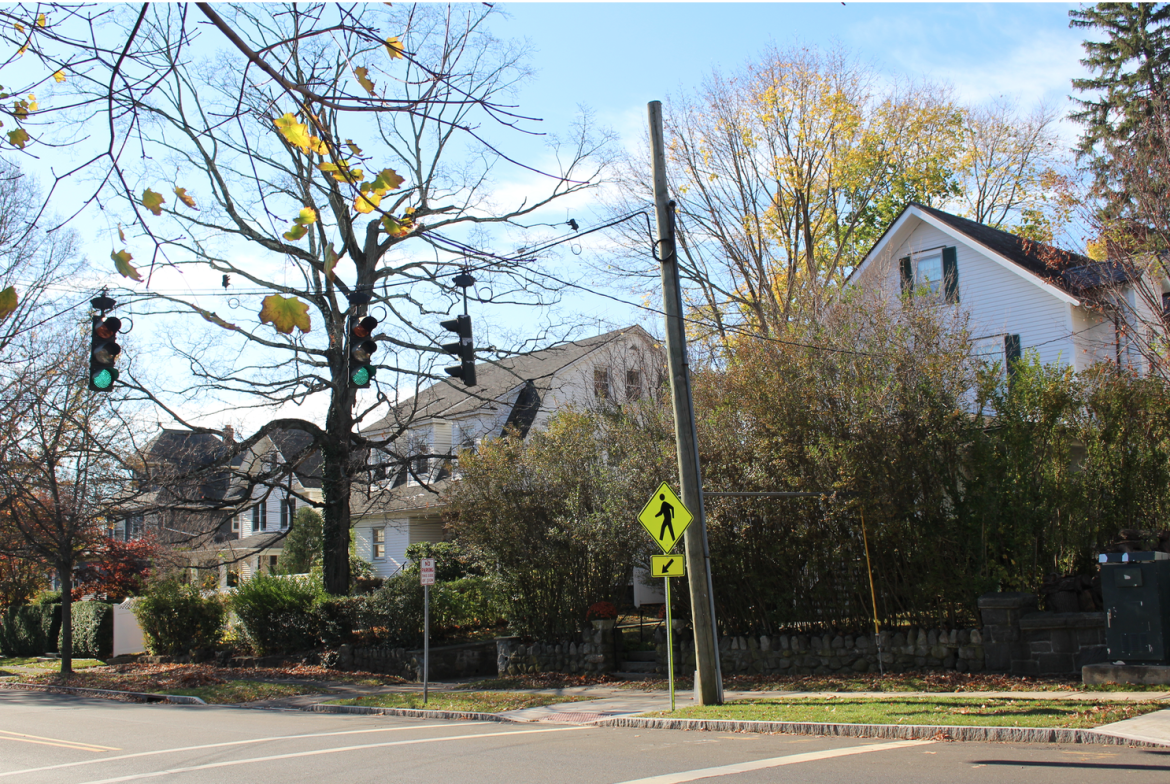 In tact streetscape with row of century old homes on Milbank between Lexington and Lenox. No. 80 Milbank is second from right. Credit: Leslie Yager 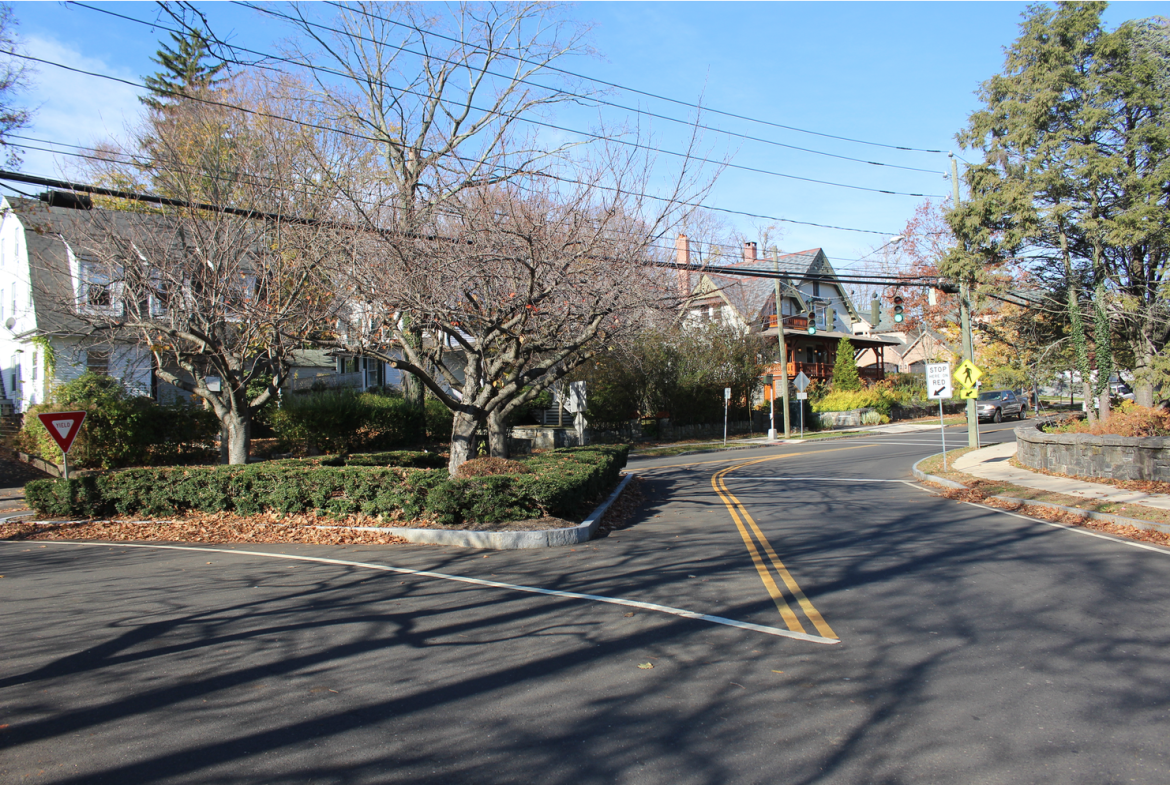 View of Milbank looking north. Streetscape in tact on side with houses for a century. On the east side is Julian Curtiss School, built in the 1940s and the Bowman Observatory installed 1941. Credit: Leslie Yager 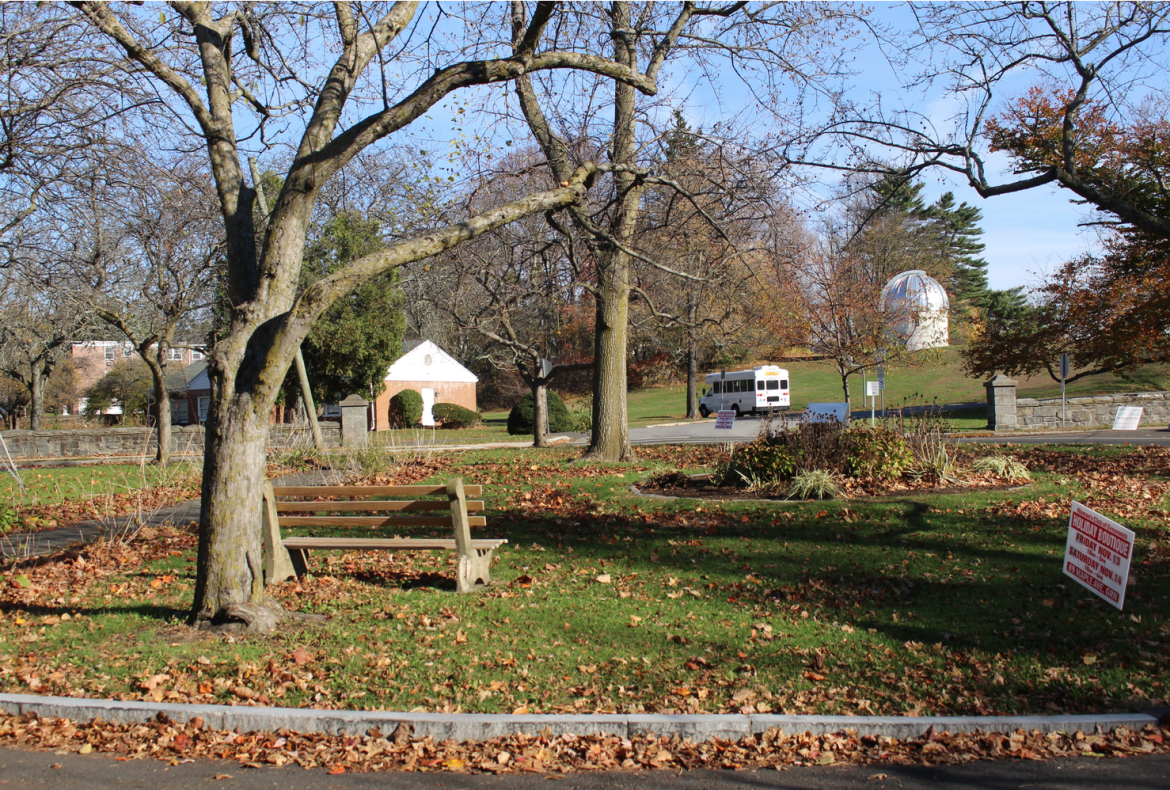 View of the east side of Milbank, with the Bowman Observatory installed in 1941, and a small brick building used on and off by Julian Curtiss or the town for pre-school. Many years ago it was used for special needs students before mainstreaming. Credit: Leslie Yager 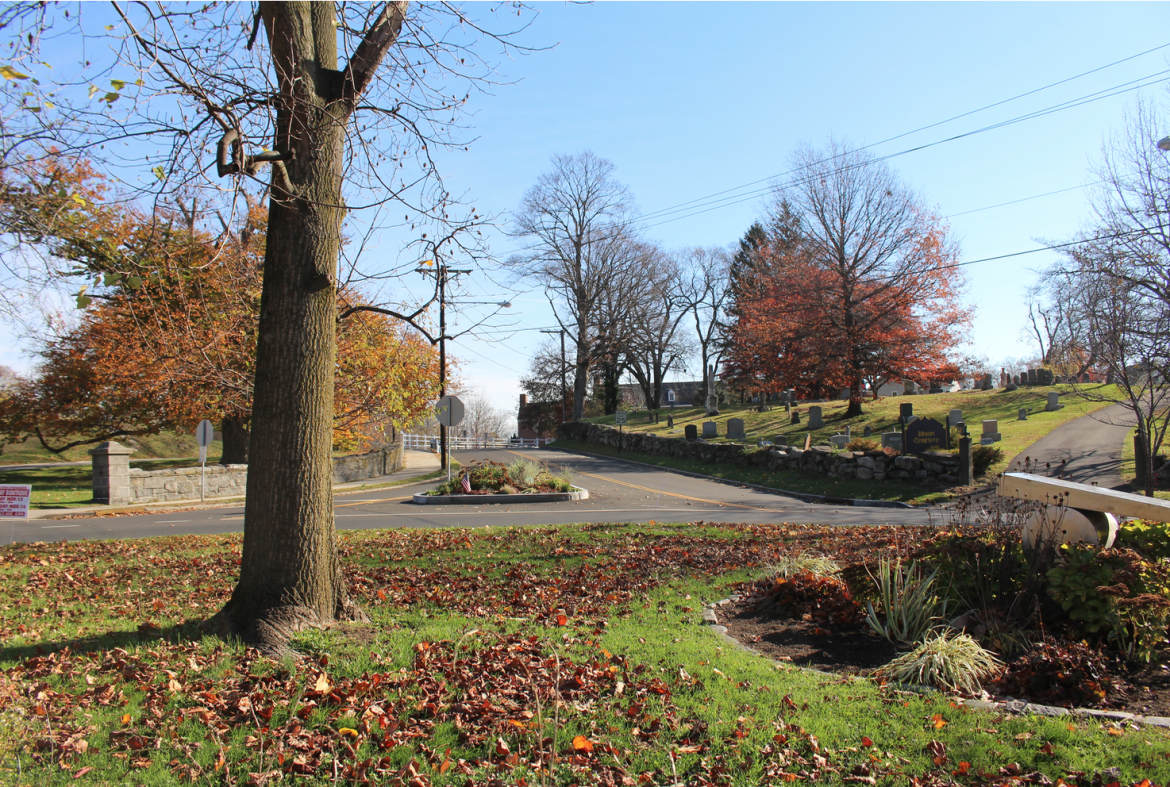 View of the east side of Milbank including Julian Curtiss School, built in the 1940s and historic cemetery at right. Credit: Leslie Yager

The discussion moved onto loss of a streetscape characterized by front porches that lend welcome feeling to the old homes on upper Milbank, where the tear-down trend has made less of a mark.

Mrs. Ramer asked Mr. Heagney if his client would consider adding a porch.

Mr. Macri said he thought the rendering makes the front yard appear to have two retaining walls. “To me that is a significant step up from the street,” he said.

“Is there any way we can turn this around in the area that you are regrading? You’re turning sideways on the streetscape which is important to us,” Mr. Macri said.

Mr. Heagney said there is a similar two-unit construction a few doors up, where the Milbank side of the home has French doors to a patio atop a retaining wall that is screened from view. “It’s a brick building where you enter from the side,” he said.

Mr. Macri quickly pointed out that the building Heagney referred to is on a corner lot at Milbank and Lenox, and is not sandwiched between two other deep, narrow lots.

“It’s antiquated in terms of its layout and has significant fire code issues associated with it,” Heagney said of the existing house, adding that it would not be feasible to built two units oriented toward Milbank because the lot is deep and just 60 ft wide.

“We don’t have contextual zoning in town. That’s not the way we approach zoning,” Heagney said. 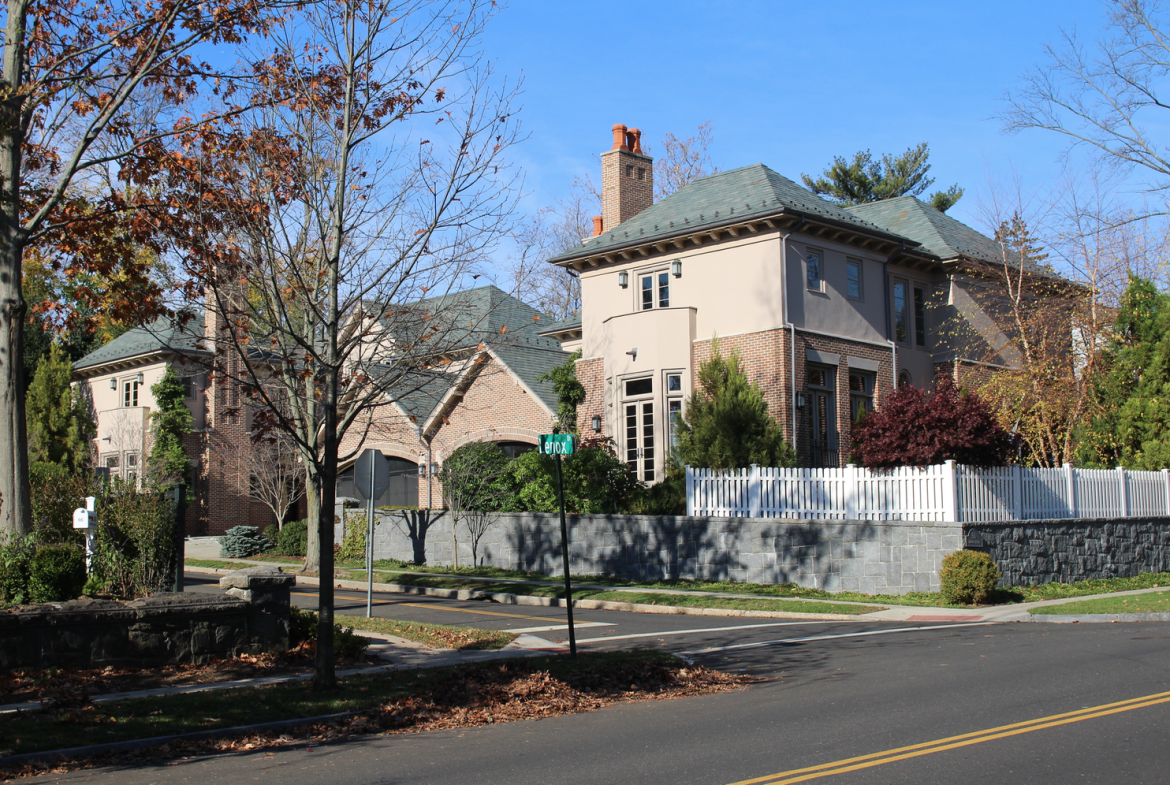 Attorney for the applicant seeking to build two units on a narrow lot oriented sideways, pointed to that double units oriented sideways were constructed at the corner of Lenox and Milbank. However, the P&Z commissioners pointed out that is a corner lot. Credit: Leslie Yager 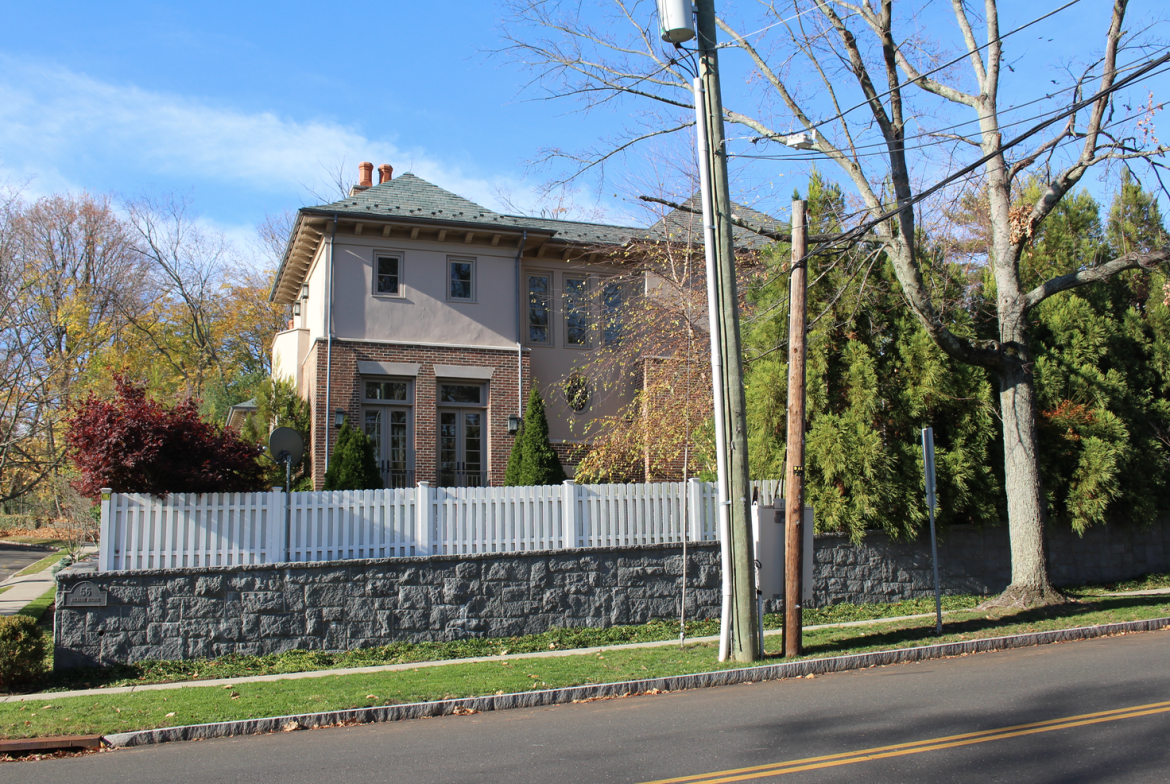 Screening of French doors and terrace facing Milbank at the corner of Lenox. Credit: Leslie Yager

“My concern is we’re setting up a precedent here for sideways facing buildings and I’d like to see some effort to a better street facade. Something more akin to the streetscape we’re seeing now,” Mr. Macri said.

Mr. Heagney said, “I want to address this in terms of other development on Milbank. The fear that this will cascade down and lose front porches is really in effect,” he said, adding that further down Milbank there are developments with no street presence.

“We’ve lost large stately homes on the east side of Milbank, and it seems to be moving up toward the cemetery,” Mr. Macri said.

“Our mandate is to preserve the intrinsic characteristics of the neighborhood,” said Mrs. Alban. “It’s not to determine what’s going to happen down the road. That’s not what 617 says. It’s to consider the impact,” she said referring to Greenwich Municipal Code.

“More effort needs to be put in to the street facade and what you can do to enhance it and the streetscape,” Mr. Macri said. “It would also be good for the property owner. So it doesn’t stick out like a sore thumb.”

“We’ll take a look at it,” Heagney said.

“People on Milbank are really upset about the streetscape and sticking in double-houses sideways,” Mrs. Alban said. “It makes people uncomfortable.”

Mr. Heagney asked that the P&Z commission leave the application open rather than vote on it, and they agreed. Stay tuned.

See also: What’s Next for the Wrecking Ball in Greenwich? 1910 Home Across from Observatory